Build Your Base: The Aero Precision M4E1 Lower Receiver 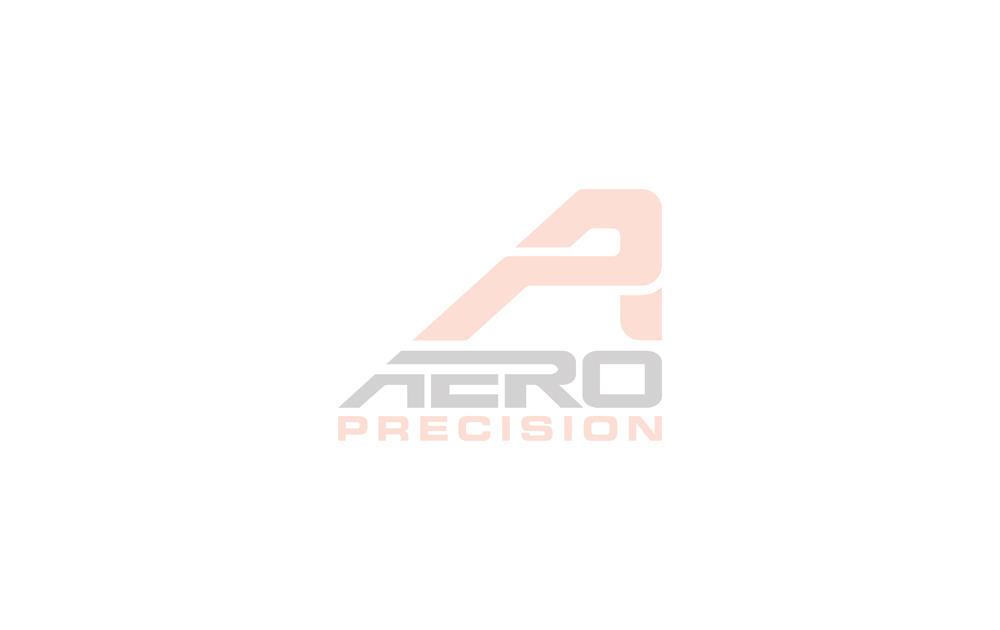 This lower receiver is awesome at every stage. It makes for a great building experience. And it delivers an outstanding shooting experience.

Want to know what’s so special about this lower receiver? I’ll tell you.

From a very high level, the M4E1 lower hits all the bases: price, ergonomics, function, durability, and all the rest.

But there’s nuance to all these characteristics. And, unfortunately, there’s a reason or two not to use the M4E1 lower receiver. I’ll get to those.

I’m kind of a stickler for finishes on my receivers. And I know that not everyone is a stickler for clean anodized finishes. But the M4E1 lower has the best finish you can get for the price.

Yes, there are companies that produce smoother, glossier anodized finishes. But none of them sell lower receivers at a better price.

For the money, the M4E1 has the best finish you can get.

It’s a nice deep black, rather than the grayed out black that you see on many budget lowers. And the finish is nice and smooth. Again, this is in contrast to many budget lower receivers, where the anodized finish has a matte finish. 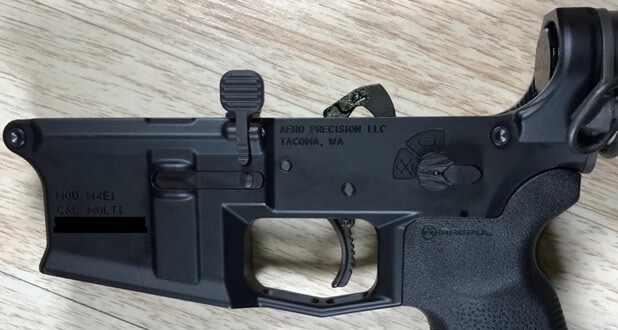 Overall, the M4E1 has a super attractive finish.

The finish is also super durable. We use several M4E1 receiver sets on rental guns at the range. They get banged up a lot. And the finish resists wear and dings impressively well. It’s not invincible. But it’s quite durable.

So, even if you put a lot of wear and tear on your guns, the finish will hold up. And your gun will look cool and stay safe from corrosion for as long as possible.

All in all, two thumbs up on the finish.

But, limitations aside, the design offers several benefits.

First, the angular design improves impact resistance, according to Aero Precision. I’ve seen M4E1 receivers get beat up a lot. And they do indeed seem very impact resistant. 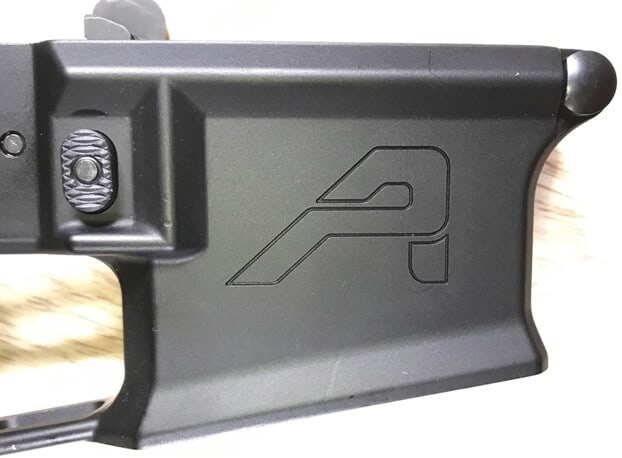 However, I can’t verify if the M4E1 lower is actually more impact resistant than a standard AR-15 lower receiver. But the M4E1 is very durable, regardless of whether or not it’s significantly tougher than a standard lower.

Here’s what I find to be the best part of this lower receiver, though: the threaded bolt catch roll pin.

Installing the bolt catch roll pin is pretty much my least favorite part of assembling a lower receiver. And it’s the part where most people tend to scratch the finish on their lower receiver.

The threaded bolt catch pin removes this hassle altogether. You just install the pin with a hex driver. It takes like two minutes. And I’ve never scarred the finish on the lower receiver while installing the bolt catch on an M4E1 lower. 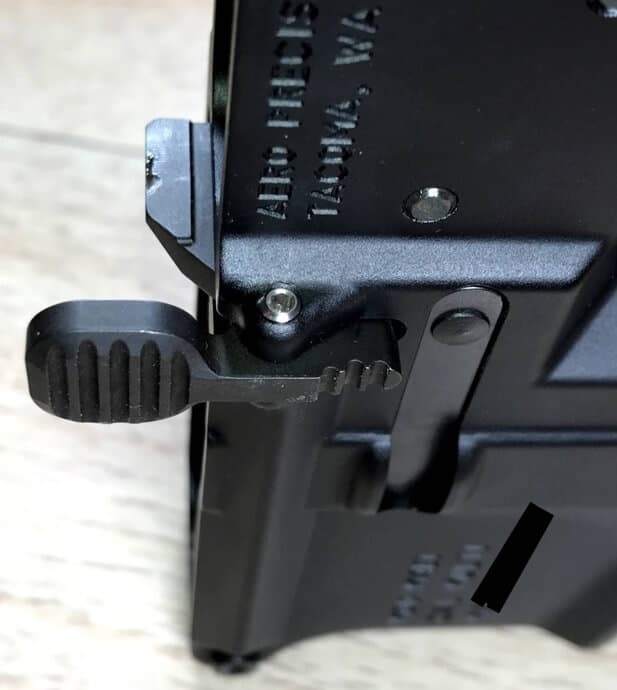 This is honestly the best part of this lower receiver.

You may be concerned about the threaded pin coming loose. However, the threads are tapered to keep the pin from backing out. And, you can put a tiny dab of threadlocker on the threads, if you’re really worried about it.

I’ve never seen an issue with the threaded bolt catch pin backing out, with or without threadlocker, though. So the ease of installing and replacing the bolt catch is more than worth the almost non-existent risk of backing out, to me. 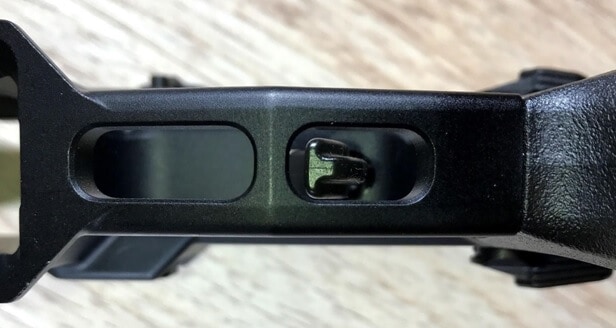 Additionally, the M4E1 lower has an integrated trigger guard that’s very nice. And it’s skeletonized to keep the weight about the same as a mil-spec trigger guard.

Obviously, it saves you the trouble of installing a trigger guard. But it’s flared slightly to give you easy access to your trigger, with or without gloves.

However, all the corners are rounded to eliminate any harsh edges that might chew up your knuckles. The trigger guard is very well designed in terms of both performance and ergonomics. 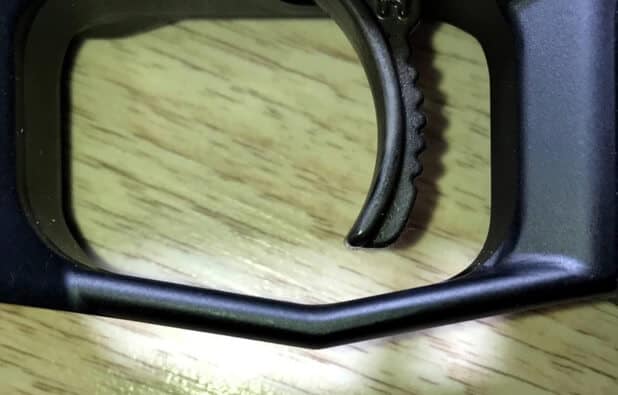 Look at that! No harsh edges

So, what’s the downside to the enhanced design?

But, if you want enhanced controls, you’re more limited in which ones you can use. Not all enhanced bolt catches fit the M4E1. Ambidextrous bolt catches sometimes have fit issues, too. And there are some enhanced magazine releases that don’t fit right.

However, not all enhanced controls have fit issues on the M4E1. If you want to use some enhanced lower parts, they’ll probably work. It’s just wise to check the fit before you go all in.

Also, I’ve heard that there are some upper receivers that the M4E1 doesn’t fit. But I’ve never actually encountered one. So I’m not exactly sure which upper receivers don’t fit. Rumor is that they’re out there, though. 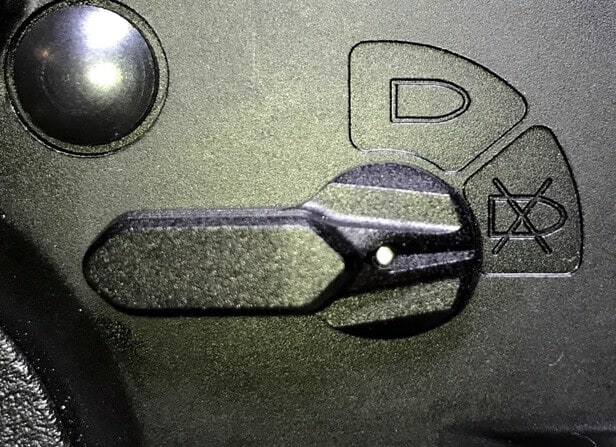 As you might have guessed from looking at the Aero Precision M4E1, there’s nothing super special about it in terms of performance. There are no serrations on the front of the magazine well or crazy magazine well flare.

However, the magazine well has a more aggressive flare than a standard AR-15 lower receiver. That gives you a slight edge when it comes to getting the magazine into the well, which means faster reloads and easier loading. 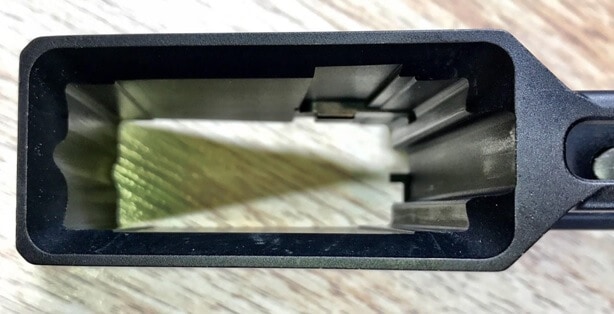 The magazine well is slightly more flared than a mil-spec lower.

Obviously, the performance isn’t a massive improvement over a standard AR-15 lower receiver. But the operation is a little bit faster and easier. And even a little bit counts

Thoughts on the Lower Half

In the end, the M4E1 could be the only lower receiver you ever use. It’s that good.

No, it’s not perfect for every application. If using certain enhanced controls is a deal breaker for you, and those parts don’t fit the M4E1, you’ll obviously need something else. 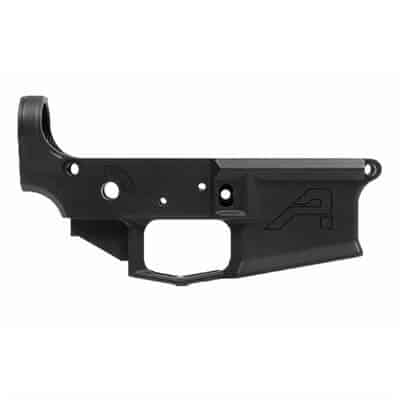 However, the M4E1 can do anything you need if you can be just a bit flexible in terms of which lower parts you use.

So you don’t have to compromise your budget to get the benefits of this lower receiver. That’s why I can recommend it for any rifle.

Feel free to use this lower receiver for everything, because it’s good enough to do anything you’d need an AR-15 to do.

Buffer tube is also a game changer in terms of performance, with a slight adjustment comes a great enhancement.