The Importance of Staying Informed

There are a dizzying array of rifle cartridges available on the market today. Every day, an ammunition manufacturer seems to introduce a new rifle cartridge for hunting, competitive target shooting, self-defense, or law enforcement/military service. As a result, it's hard to decide what’s right for your particular shooting needs.

The best way to stay ahead of the curve is to inform yourself on the basics of ammunition and the most popular rifle cartridges. That way, you can avoid spending money on a rifle for a round that doesn’t perform how you need it to.

A rifle is a shoulder weapon with a rifled barrel. Rifling is a series of spiral or polygonal grooves cut or formed into the bore of a barrel.

When the bullet enters the bore, these grooves cut into the shank of the bullet, imparting rotation. This rotation stabilizes the bullet gyroscopically, allowing it to travel considerably farther and more accurately than would be possible otherwise.

Bullet design is a highly specialized discipline in ammunition manufacturing. As a bullet flies through the air, two forces work against it: Drag (air resistance) and gravity. The designer of a bullet can’t do anything about gravity, but they can improve the aerodynamic efficiency of the bullet, so it’s less affected by the air and wind it passes through.Rifle cartridges come in a variety of configurations. The components that comprise a cartridge are the bullet, powder, primer, and case. 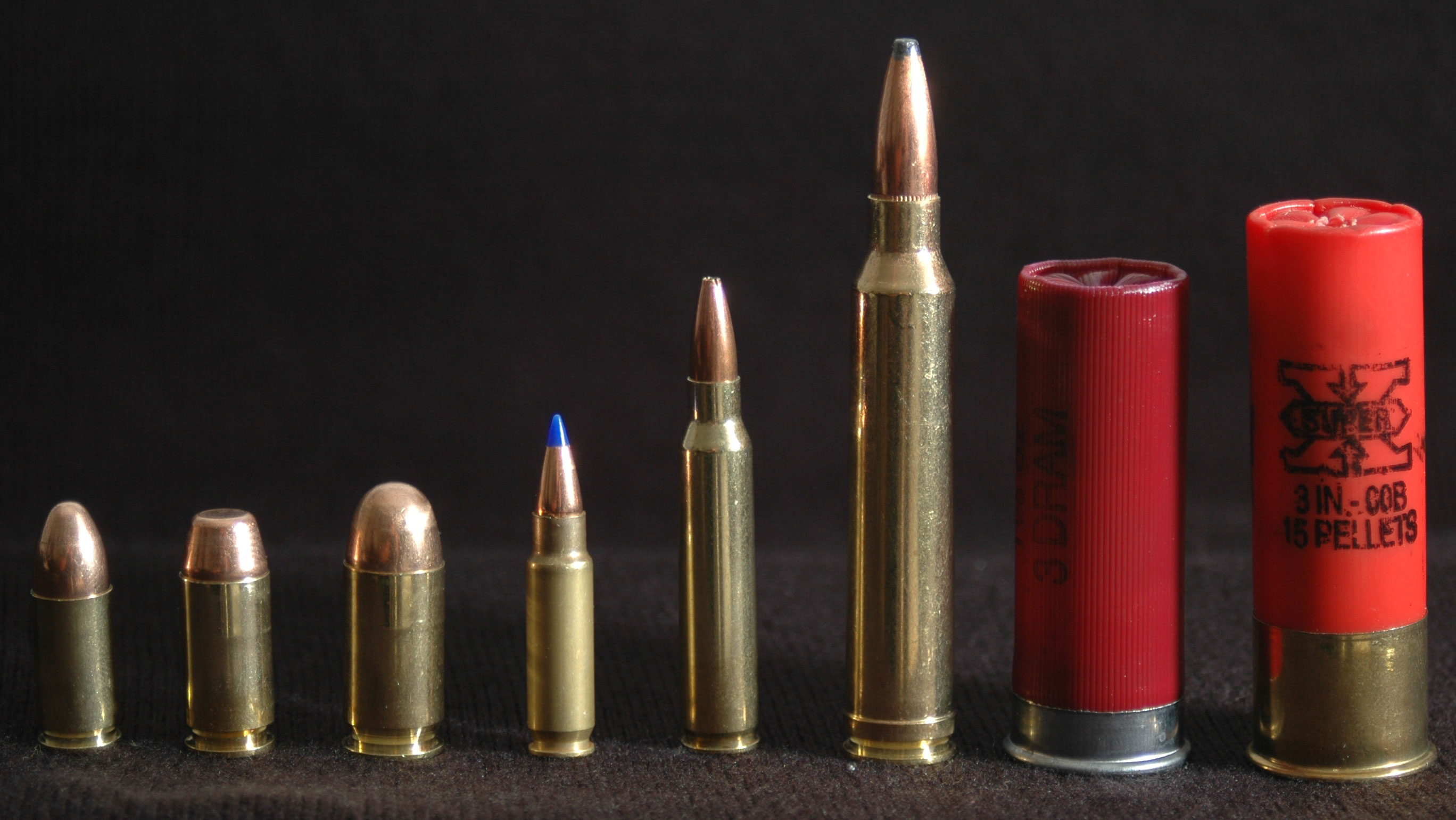 The cartridge case’s primary purpose is to hold the bullet, propellant charge, and primer together in a self-contained package for storage and transport. In semi-automatic and selective-fire rifle actions, the case also absorbs heat from the chamber and removes it from the weapon. This keeps the gun cool and prevents a “cook off” from occurring — i.e., when the heat in the chamber is high enough to ignite a round.

The cartridge also determines the seating depth. This is called the headspace — the distance between that point in the chamber that stops forward movement and the breechface. To accomplish this, cartridge cases have different headspacing points. In a bottlenecked cartridge, such as the .223 Remington, this is at the midpoint of the shoulder. In a rimmed cartridge, such as the .30-30, the rim fulfills this role.

The caliber is not always 100% representative of the true diameter. Marketing or the need to differentiate two or more rounds can also play a role in naming conventions.

Manufacturers often use “magnum” to indicate that a particular cartridge is more powerful than a standard variant or other rounds on the market. This can mean that the case is longer and the powder charge heavier, so the resulting muzzle velocity and kinetic energy are greater.

This is arguably the most popular cartridge in the world. Available in a wide variety of handguns and rifles, Steven Arms Co. invented the .22 Long Rifle 1887. A rimfire cartridge, the priming compound is contained inside the cartridge case rim or flange.

The .22 Long Rifle cartridge is lightweight, compact, and inexpensive. It’s also relatively quiet and doesn’t produce much recoil, so it’s perfect for teaching beginners the fundamentals of marksmanship and introducing new shooters to firearms.

The 5.56mm military cartridge’s commercial variant, the .223 Remington is a lightweight, compact, high-velocity cartridge. It’s perhaps best known as the standard chambering for the AR-15 rifle pattern, although it’s used in other weapons as well.

The .223 round is sufficiently powerful for most defensive applications and produces only light recoil, so it’s versatile and can be used by men, women, and children with ease.

Derived from the .308 Winchester cartridge, the .243 is a sporting rifle cartridge that hunters use for varmints, deer, and black bear. Since it’s both accurate and soft-recoiling, it’s a popular round for introducing children to hunting. In a tactical context, Los Angeles SWAT teams used bolt-action sniper rifles in .243 Winchester.

In 1925, Winchester introduced the .270 Winchester cartridge. The company designed the .270 as a flat-shooting hunting cartridge, suitable for various game animals in North America. To design this cartridge, Winchester necked down the venerable .30-06 cartridge to .277 caliber. The result is a high-velocity round that packs a considerable wallop.

Introduced in 1954, the .308 Winchester is the commercial variant of the 7.62×51mm NATO cartridge, in use by militaries worldwide. As a sporting round, .308 is available in semi-automatic and bolt-action rifles for hunting and competitive target shooting. It’s also a popular choice for tactical rifles. Many semi-automatic variants of tactical rifles, such as the M1A, HK91, FN SCAR, and others, have entered the market.

A relative newcomer, the 6.5mm Creedmoor is a long-range target shooting cartridge. Available in both bolt-action and semi-automatic rifles, including the popular AR-10 pattern, this round is also effective for hunting game.

What to Look For?

With a more extensive understanding of rifle ammunition and some of the most popular cartridges on the market, it should be easier to avoid selecting the wrong round for your needs.

When you want to buy a rifle to fire a new cartridge, the first question you should ask is, “What do I intend to do with this?” If the answer, for example, is self-defense, investigate the best cartridges for home protection.

Is the new round readily available and popular? If it’s not, you may find yourself unable to buy ammo, especially during general shortages. The newer and more specialized the cartridge, the harder it will be for you to buy ammo.

For more information, check our guide on basic ammo parts.

There are many rifle calibers to choose from, but it’s important to be knowledgeable. Getting the right caliber for your hunting, competition, or home-defense needs should be considered carefully so you don’t waste your time or money.

You can also check out our Basic Pistol Caliber Guide and our most popular Ruger 10/22 ammo and as well as Choosing the Right Ammo Type.