The problem with most beginner or entry level products is that they’re … well … entry level.

Whether it’s a computer or a crossbow, most entry level items just don’t grow with you as you gain experience and skill.

You’re left needing to make an upgrade six months or a year after that first purchase.

Not so with the Barnett Recruit.

The Recruit is an entry level crossbow with a great set of features designed to grow with shooters.

Keep reading for an in-depth look at the Recruit and why it might be right for you. 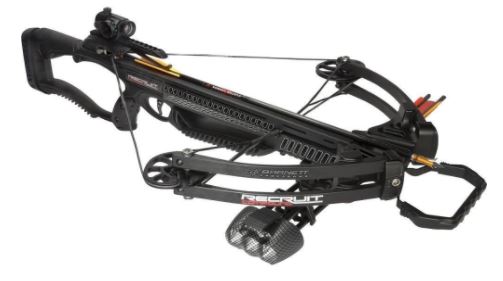 If you’re looking for your first crossbow, it’s hard to go wrong with the Barnett Recruit.

The Barnett Recruit is a solid performer at a great price point.

Crossbow shooters get plenty of power and a quality product made by one of the oldest names in the crossbow business for a price that’s manageable for most first-time buyers.

A Closer Look at the Barnett Recruit

With a compact form factor and a lightweight, simple to use design, the Recruit is a great pick for both beginners and smaller shooters. But. It’s also a crossbow that can grow with users as they improve.

Barnett has been making crossbows since the early 1960s and have long been an innovator in the field. While the Recruit keeps things simple, it’s built on a legacy of quality and innovation.

One the Barnett Recruit’s strongest features is its lightweight, compact design. This is really what makes it such a great choice for beginners and smaller crossbow users.

Instead of adding budget components, Barnett has added a good set of composite limbs and other parts to the Recruit, making it more than just another entry level crossbow.

The Recruit also comes with a red dot sight. While most crossbows come as a package and include some type of optic, red dots are very easy to use, especially for less experienced shooters.

The Recruit is more than just a simple, beginner crossbow.

Here’s a quick rundown of its most important specs:

One of the best things the Barnet Recruit has going for it is its simple, lightweight, and durable build. With a composite stock, this crossbow is made to be used.

Another great thing about this crossbow is the name behind it. Barnett has been making crossbows for many years and they’ve built a reputation on quality and reliability.

Here’s another big pro for the Barnett Recruit:

At under $400, the Recruit comes in at a price comparable to most budget crossbows. But the Recruit is definitely not a budget bow. The Recruit is a complete package, with features typically found in much more expensive crossbows (read more here).

Who Is the Barnett Recruit For? 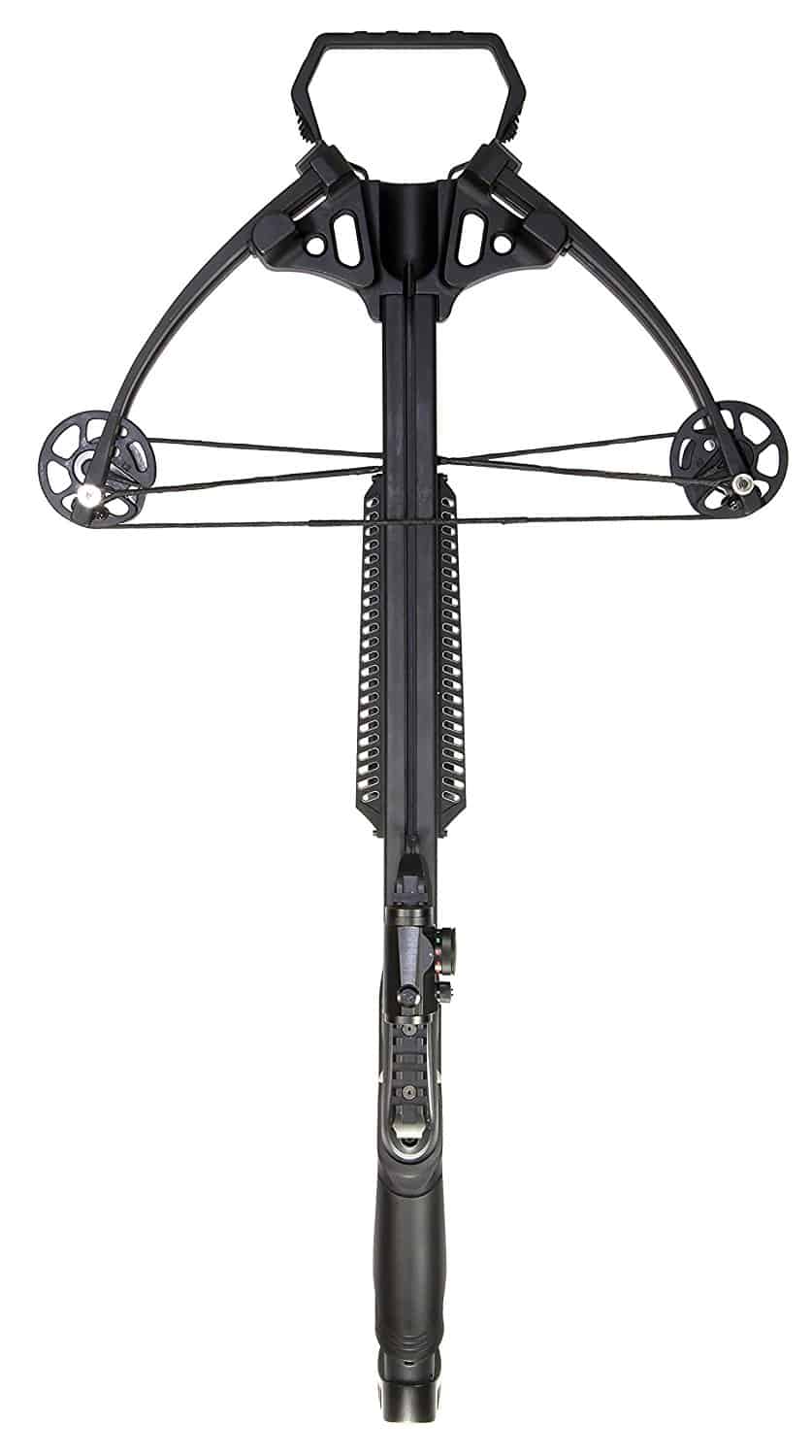 While the Barnett Recruit is a very versatile crossbow and gives users of all abilities a lot of bang for their buck, it really shines as a first crossbow or for those still developing their skill.

The size of the stock is also better suited to smaller shooters. The stock’s adjustability does allow it to be sized up a little though.

But, the Recruit is still a very good crossbow overall with a lot of great features that are backed up by a company—Barnett—with a long history of quality.

So, the Recruit gives newer shooters a package they can really grow with.

While their Ghost line of bows are some of the best and most innovative on the market, most of their products come at reasonable prices. And the Recruit is one of their most reasonably priced models.

The Recruit is one of the best crossbows in its category. Period. For this price, you’d have a hard time find a better bow, whether you’re looking for a first crossbow or not.

And, if you are looking for a first crossbow for yourself or someone else, the great thing about the Recruit is that you don’t need to feel pressured to look for a better bow down the line. This crossbow will grow with you. 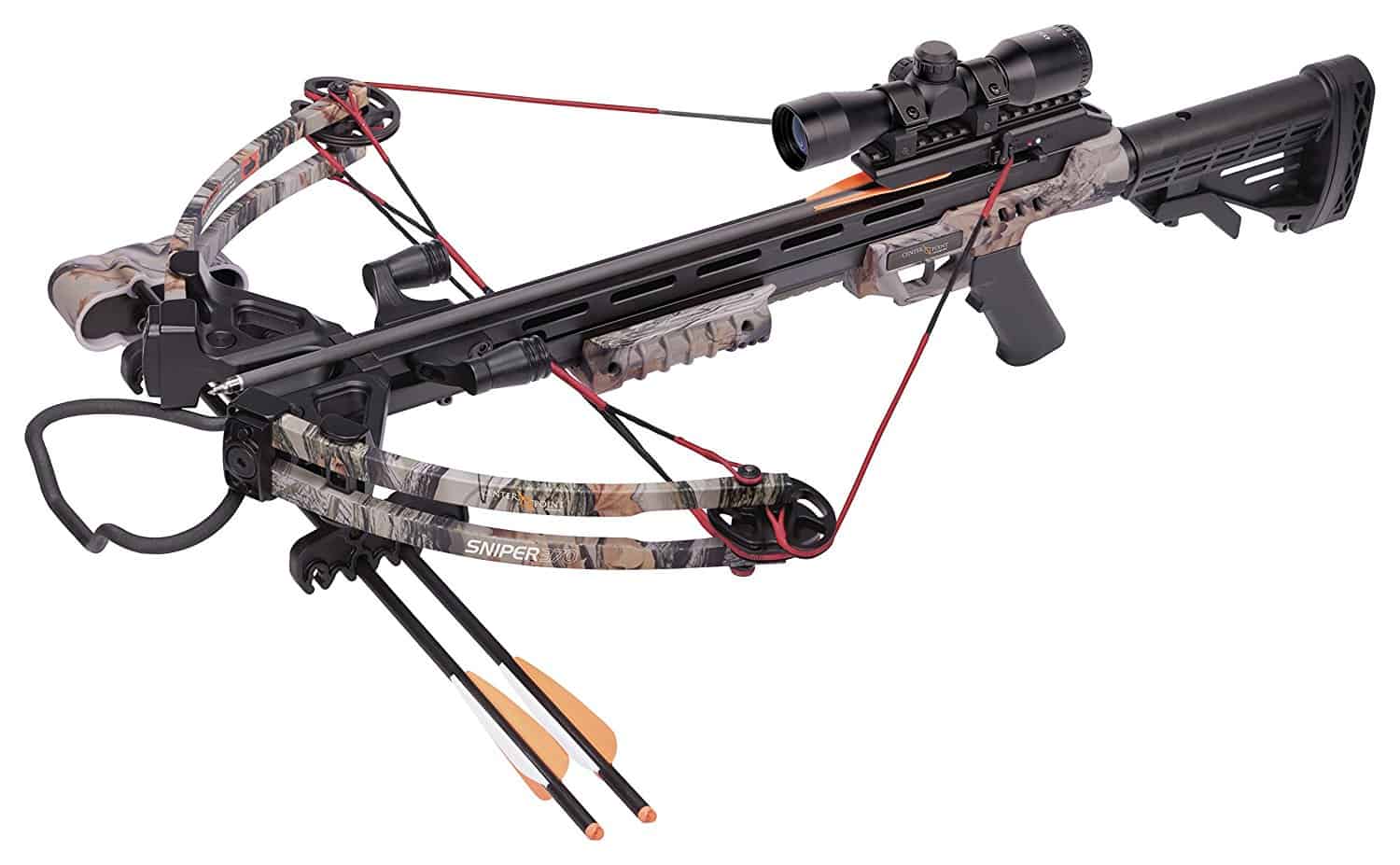 Considering the Recruit’s price and feature set, it’s tough to compete with.

But, if you’d like something a bit bigger and slightly lower in price, the Centerpoint Sniper 370 is worth a look.

With arrow speeds of up to 370 feet per second and a draw weight of 185 pounds, the Sniper 370 is a bit more powerful than the Recruit. An adjustable AR-style stock also makes it flexible enough for smaller shooters. The Centerpoint is a bit heavier though at nearly eight pounds.

For newer or smaller crossbow shooters, the Barnett Recruit is still a top choice.