The Best .224 Valkyrie Uppers for Your Special Purpose Rifle

The quest for a true long-range AR-15 rifle has been underway for a decade or two now. .224 Valkyrie is one of the rounds that’s purported to deliver long range capabilities with some legitimate long range ballistics.

I’m not going to get into the .224 Valkyrie vs 6.5 Grendel debate right now. If you’re here, you’ve settled on .224 Valkyrie. And I’m here to help you choose an upper, so you can get out and start shooting.

SPOILER—in the name of helping you get to shoot sooner rather than later, the Radical Firearms Rf Complete Upper is easily the best value for the money of all the .224 Valkyrie uppers. So get this upper if you want something that’s not too expensive and delivers solid performance. 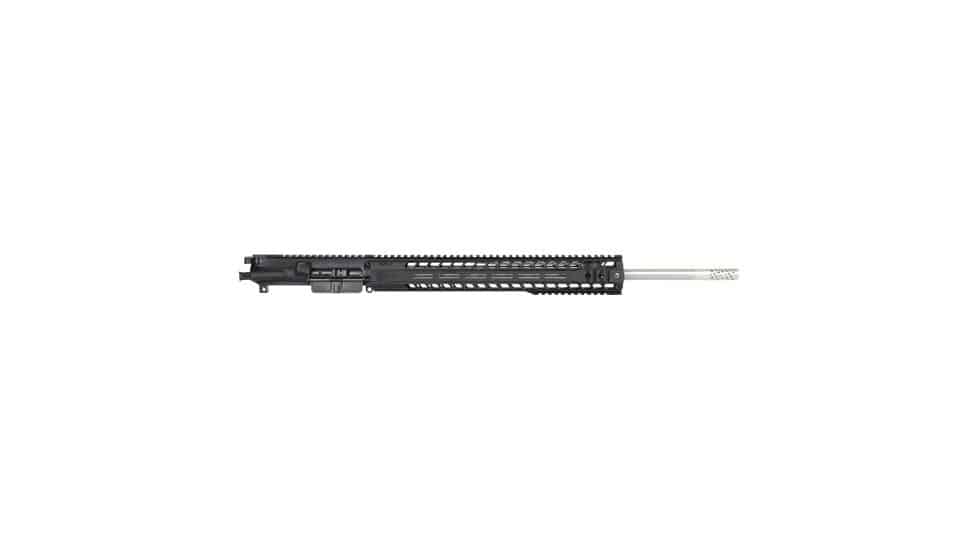 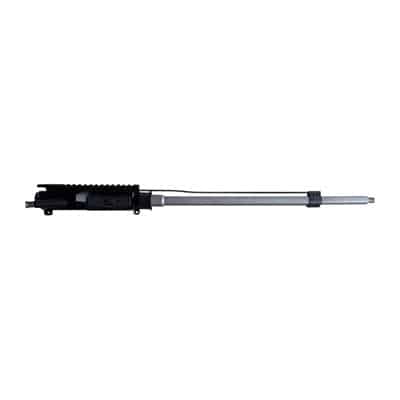 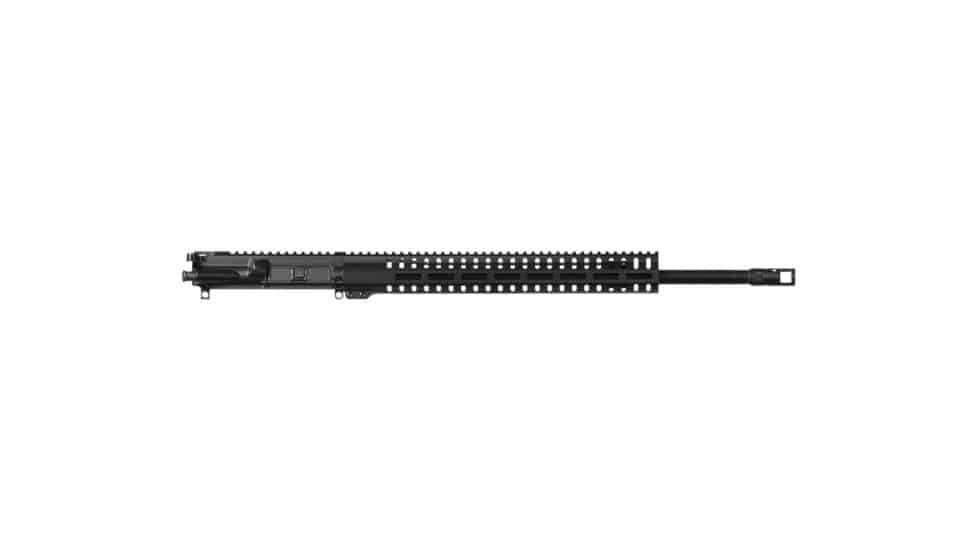 The uppers that almost everyone can afford are first in line.

The .224 Valkyrie uppers that blow holes in targets and your budget are near the end.

Scroll to the reviews that match your budget.

Radical Firearms is primarily a budget firearm manufacturer. Their rifles are very affordable. But they work very well. I rarely see issues with Radical Firearms guns, which is impressive given the price point.

The Radical Firearms Rf Complete Upper is basically the .224 Valkyrie version of their AR-15 MHR upper, with one minor change.

Additionally, the barrel is capped with a muzzle brake that actually does a pretty good job of keeping the recoil down. And it’s almost the exact same diameter as the barrel. So it’s very streamlined. It reminds me of the muzzle brake that Ruger uses on their X-Bolt rifles.

However, you may notice that the finish shows friction wear a bit faster than some black nitride bolt carrier groups. But that’s normal. And the BCG seems to have good build quality and lifespan in terms of the quality of the metal.

However, I’ve never seen any wiggle or flex from the handguard. It’s strong and secure. Additionally, the handguard has a picatinny quad rail near the muzzle end. It adds a bit of weight. But it’s actually very handy for mounting bipods and other forend attachments.

Overall, this is a really solid .224 Valkyrie upper for the money. It’s pretty straightforward—essentially just a mil-spec upper. But the quality is focused in the areas where you need it.

As you may have gathered from the name, this isn’t quite a complete upper receiver assembly. There’s no handguard, muzzle device, bolt carrier, or charging handle. So you can fit this upper receiver with cheap equipment to save yourself money. Or you can get the good stuff without paying for the factory components.

The barrel is a 22-inch stainless steel match barrel that gives you plenty of precision for pushing the .224 Valkyrie round as far as possible, with good terminal ballistics.

The barrel is mounted to a 7075-T6 aluminum upper receiver that has a really smooth finish that improves organic lubricity and helps ensure that whatever bolt carrier group you throw in this rifle operates super smoothly.

Overall, the component quality is remarkably high. That’s why this Sons of Liberty upper receiver—even without a bolt carrier, charging handle, or handguard—is nearly as expensive as some complete upper receivers.

However, this upper receiver kit is an amazing platform to use for building your .224 Valkyrie AR-15 that will enhance the performance of any other components you use.

The CMMG, Inc. ENDEAVOR 200 Series Upper Receiver Group is impressively priced, considering how well built it is. It’s priced like a budget upper receiver. But it comes with many features you’d get from a higher priced upper.

CMMG makes remarkably high-quality mil-spec parts. Their machining is precise and their anodized finishes are thick and smooth. This upper receiver produces a tight, smooth action.

The barrel is capped with a single port muzzle brake that’s reasonably effective. It doesn’t reduce the recoil quite as much as a more advanced muzzle brake, like a Gamma 556 or something. But the muzzle brake is pretty decent for a factory muzzle brake.

The handguard is a solid, stable handguard. The mounting system is secure. And the aluminum handguard itself is super rigid, perfect for mounting bipods and anything else.

However, it’s a bit thick. If you prefer a slim handguard, you might find that this CMMG Inc handguard is a tad much for you.

The ergonomic hardware is just standard mil-spec stuff. So you might want to upgrade a few pieces. But you could easily use this upper for just about anything, right out of the box. 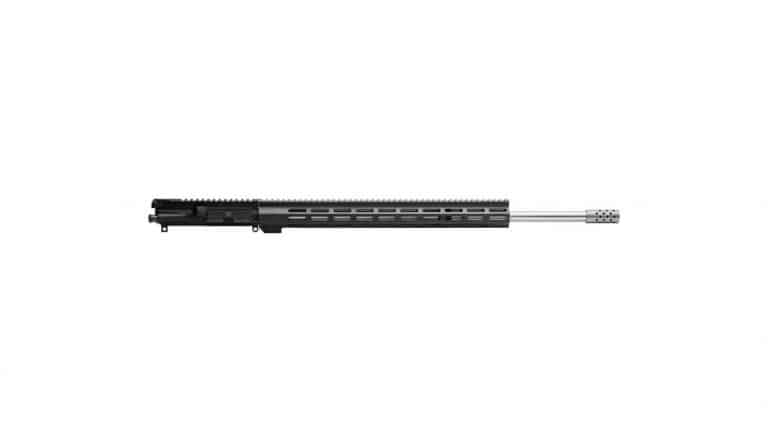 The Glfa Ar-15 Complete Upper .224 Valkyrie is specifically designed to give you more precision than most .224 Valkyrie uppers at this price.

The main thing is that this upper has a 24 inch stainless steel barrel, which is a bit longer than most competing barrels. It’s a perfect upper for anyone who’s trying to get .224 Valkyrie rounds out to 1000 yards.

Also, if you prefer an all black upper receiver, you can get the same performance from the Glfa Ar-15 Complete Upper 224 Valkyrie Nitride, which is the same upper with a black barrel.

The barrel is also capped with a muzzle brake that’s similar to the muzzle brakes that you find on many bolt-action rifles. It’s a good muzzle brake for slow, precision fire, which is fine for a .224 Valkyrie rifle.

The handguard is a sturdy M-LOK handguard that’s strong enough to use with a bipod. It’s a 17.75 inch handguard, which covers the rifle-length gas system.

However, the longer barrel does stick out of the handguard quite a bit. So this rifle has a bit of a classic M16 look, which you may or may not like.

But, regardless of the look, this GLFA upper receiver still has a longer barrel that’s designed to help you get the best long-range precision and terminal ballistics possible from a .224 Valkyrie rifle. 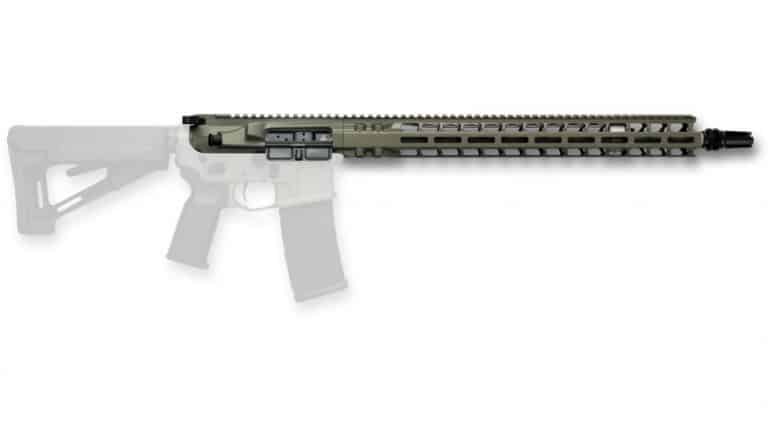 Additionally, the bolt carrier group is nitride coated to produce a smoother action, with less lubrication.

On the outside, the forward assist is shifted slightly forward to make it easier to reach and use, should you need it.

The Radian Weapons handguard has a bulletproof mounting system. It’s also remarkably rigid throughout the entire body, and is more than sturdy enough to mount a bipod on.

Then, the 3-prong flash suppressor features asymmetrical prongs that keep the muzzle device silent when you run the bolt (no tuning fork sound). And it’s a solid flash suppressor.

That flash suppressor is mounted to an 18 or 20 inch barrel, which is precisely machined and offers remarkable precision. Though, you may prefer a longer barrel if you’re trying to get the best velocity and ballistics at long range.

It’s not cheap. But, if you want a high-reliability upper receiver with excellent ergonomics, this is the way to go. 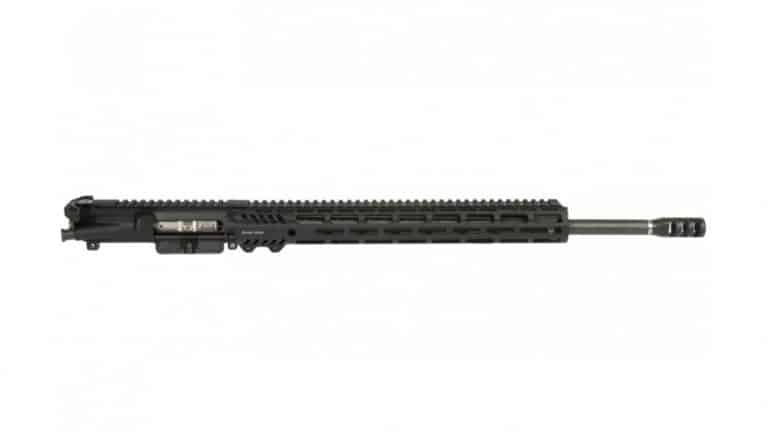 Gas piston AR-15 rifles are an advancement in AR-15 reliability. Unfortunately, it can be tricky to find gas piston uppers, since the parts tend to be proprietary and there aren’t a ton of manufacturers that make gas piston rifles.

The Adams Arms P3 Complete .224 Valkyrie Upper Receiver may not have a ton of competition. But the gas piston system is well built. And it addresses some of the inherent struggles with gas piston AR-15 rifles.

Clearly, the gas piston system is adjustable. And it’s a rifle length system. This offers a few benefits.

First, the adjustable gas system enables you to run this rifle with just as much gas as you need. That way, you don’t need to be running full gas all the time. The rifle length system also makes the recoil impulse a tad less snappy.

Now, it’s a short stroke gas system. So it has a bit of pop, no matter what.

However, if the gas is properly adjusted, the rifle length system makes the gas piston recoil as mellow as possible. And you probably won’t even notice the slightly sharper impulse during slow, precision shooting.

The other standout feature of this upper receiver is the carbon fiber wrapped barrel. It’s much lighter than a full stainless steel barrel. But it’s still just as precise.

The downside of a carbon fiber wrapped barrel is that the heat tolerance is lower. If you plan on getting your rifle ridiculously hot with rapid fire, this may not be the right upper receiver for that.

However, if you want a really lightweight upper receiver that still delivers solid precision, you’ve found a good option.

One more thing: the Jet Comp. It’s a pretty aggressive, triple chamber compensator. The compensator does a really good job of reducing the felt recoil. It may not be THE BEST compensator in the world. But it’s very good.

The .224 Valkyrie round is a surprisingly capable long range round that can really take the AR-15 platform to the next level as a long range rifle. But long-range precision requires higher component quality than a standard tactical rifle.

If your .224 Valkyrie AR-15 is still just a lower receiver without a mate, it’s time to get a .224 Valkyrie upper, and get your long-range game together.