The Best 458 Socom Uppers for Big Bore Precision and Reliability

The 458 socom was created because SOMEBODY wanted an AR-15 that pretty much guaranteed a one-shot stop (so long as you got a hit). So somebody made the 458 Socom to accomplish this.

Obviously, there’s a lot more energy in a 458 Socom than a 5.56mm round. No matter what you’re doing, you’ll need the best 458 Socom upper you can get.

458 Socom isn’t the most popular cartridge. There aren’t a ton of 458 Socom uppers on the market. But there are a few. And we gathered them all here in one place for you.

SPOILER—if you just want to know which one is best, so you can get it and go, get the GLFA AR-15 Complete Upper .458 Socom. It’s an affordable upper receiver that handles the 458 Socom round. And it’s got a few creature comforts, which are handy for making shooting 458 Socom a bit more comfortable.

If you’re looking for something even more comfortable, keep reading. We’ve rounded up a whole bunch of the best 458 Socom uppers for your review. 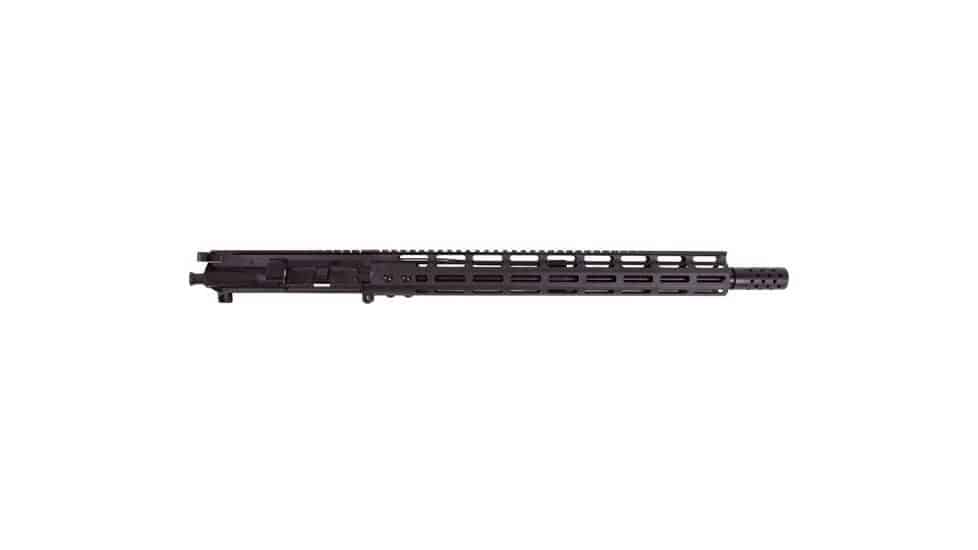 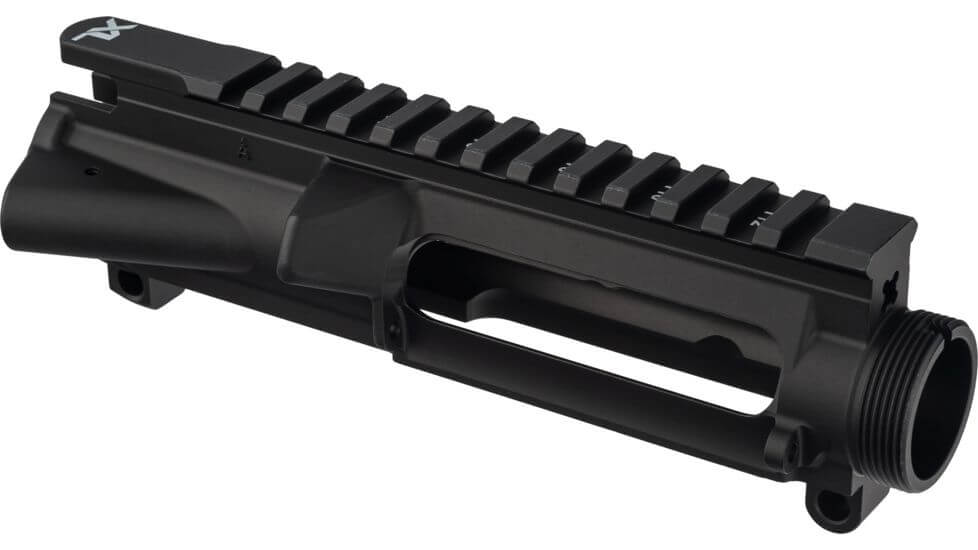 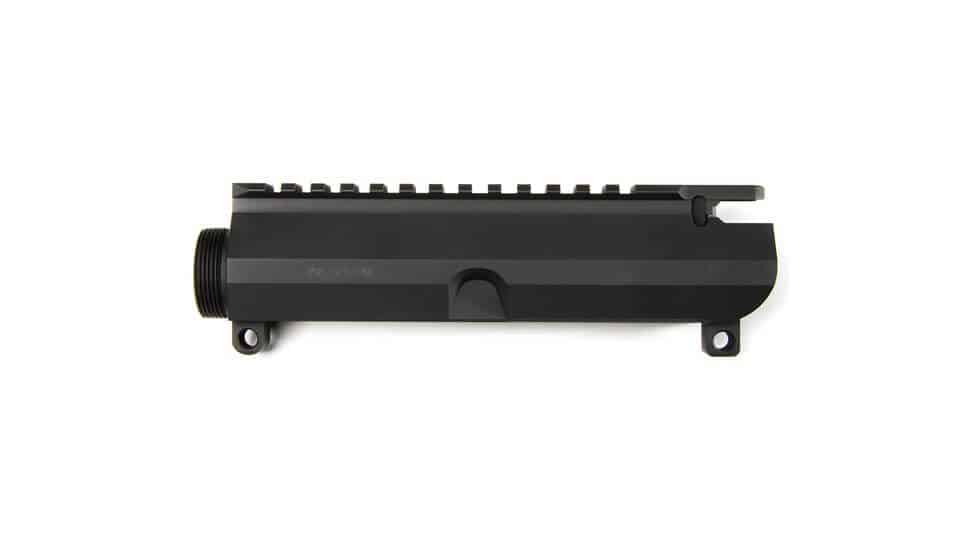 The Best 458 Socom Uppers Reviews: Checking Out the Big Boys

If you need the most affordable 458 Socom upper, read the first reviews.

If your budget is bulletproof, read the reviews near the end.

Check out the bore size on these 458 Socom uppers.

The GLFA AR-15 Complete Upper .458 Socom is kind of the median 458 Socom upper receiver. It’s affordable, but pretty nice. However, it doesn’t have a ton of bells and whistles.

Most of the price of this upper receiver pays for the materials.

The barrel is chrome moly steel. It’s durable steel that resists wear and corrosion very well. It doesn’t wear as evenly as stainless steel. But it lasts a really long time.

Additionally, the barrel produces solid precision right out of the box. Most shooters report that this upper produces 1 or 2 inch groups on the first shots. And those groups tend to get smaller as you get accustomed to the recoil.

Additionally, the barrel is fitted with a big bore muzzle brake. The muzzle brake delivers decent recoil reduction. Though, you’re still going to get a decent punch in the shoulder when you shoot. That’s just 458 Socom, baby!

On the outside, the barrel is nitride finished. And the upper receiver is hard coat anodized. The anodized finish is thick and smooth, rather than chalky like many mil-spec anodized finishes.

My only complaint about this upper is that it uses standard M4 feed ramps.

But the 458 Socom uses a single-stack configuration in the magazine. M4 feed ramps are designed for staggered 5.56mm rounds. This upper receiver is reliable. But a modified feed ramp would make the action smoother.

That’s kind of a minor issue, though, since this upper receiver runs reliably. If you need an affordable 458 Socom upper that’s nice for the price, this is the upper receiver to get.

Aero Precision makes really solid AR-15 parts. And they’re really affordable. But it’s actually rather rare that an Aero Precision part is the least expensive part in an article.

This 458 upper receiver is stripped. So you’ll need a forward assist and an ejection port cover.

Also, the Aero Precision anodized finish is excellent. It’s smooth and resists wear very well. There’s none of the chalky exterior that you see on many mil-spec finishes.

Now, this isn’t SPECIFICALLY a 458 Socom upper receiver. It’s a big bore upper receiver, with an enlarged ejection port to accommodate larger rounds like the 458 Socom.

That means that you could also use this upper receiver for shooting 50 Beowulf, 450 Bushmaster or other large AR-15 caliber, if you changed out the barrel.

But, even though the ejection port is enlarged, it still fits standard AR-15 parts and lower receivers. So you can use a standard upper receiver parts kit and mount this upper receiver to any lower you have on hand.

Ultimately, this Aero Precision upper receiver is definitely for AR-15 builders. But, it’s also the foundation for an incredibly affordable 458 Socom AR-15.

Wilson Combat makes excellent guns and gun parts. They can be a little bit pricey, though. But, if you want a really solid billet upper receiver, get the Wilson Combat Billet Upper Receiver. It accommodates the 458 Socom round. And it has a few additional enhancements.

The ejection port is enlarged to fit 458 Socom brass. That’s kind of a given, though.

This is actually good and bad. It’s good because mil-spec parts are plentiful and easy to find.

However, the downside is that the enhancements on this upper receiver limit you to mil-spec parts. Some aftermarket parts fit. But not all.

The enhancements are nice, though.

There’s no forward assist, which you may or may not like. But the slick side makes this upper receiver much more streamlined and less prone to snagging.

Lastly, the entire upper receiver body is machined with angular cuts to improve durability and rigidity. This gives you the longest lasting upper receiver possible. And it improves organic precision and reliability.

It’s not cheap. But this Wilson Combat upper receiver gives you a lot of creature comforts. And it will probably outlast most of your other components. 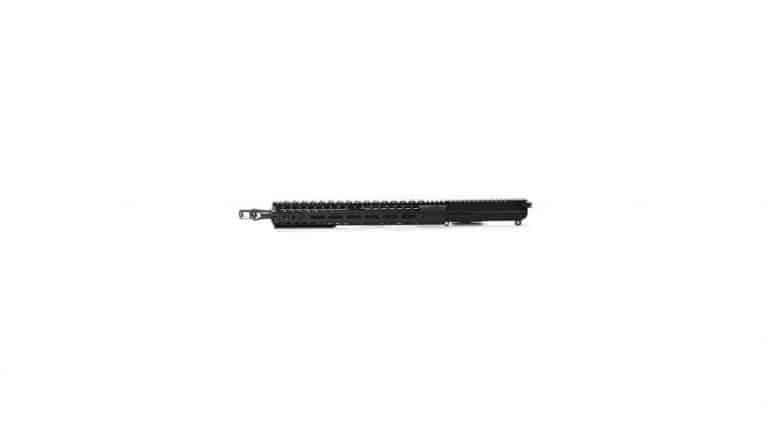 Radical Firearms has always produced solid budget equipment. And the Radical Firearms 458 Socom 16 Inch Barrel is no different. It’s not too expensive. But it’s a pretty nice upper receiver.

There are a couple standout features on this upper receiver:

However, at the muzzle end, the handguard has 4 picatinny rail sections. This is handy because, even though M-LOK is popular, a lot of lights and forend attachment still ship with picatinny mounts.

So the handguard is fairly narrow and comfortable in the middle, where your support hand goes. But it has the most versatile attachment system up front, where you may want to add a few accessories. Like I said, it’s a well-designed handguard.

The second cool thing is the muzzle brake. The Panzer Muzzle Brake is actually a decent muzzle brake. It’s basically a single port muzzle brake. But it makes shooting 458 Socom surprisingly comfortable, considering how simple it is.

Additionally, this Radical Firearms upper receiver has a single feed ramp designed specifically for feeding big bore rounds from a single-stack magazine. And the bolt carrier group is black nitride coated, which is a nice touch considering the price point.

Everything else is pretty standard. And I’ll never be satisfied with a standard mil-spec charging handle because I’m an elitist left-handed jerk.

But, if you want a really solid 458 Socom upper receiver for a great price, this is the one to get. 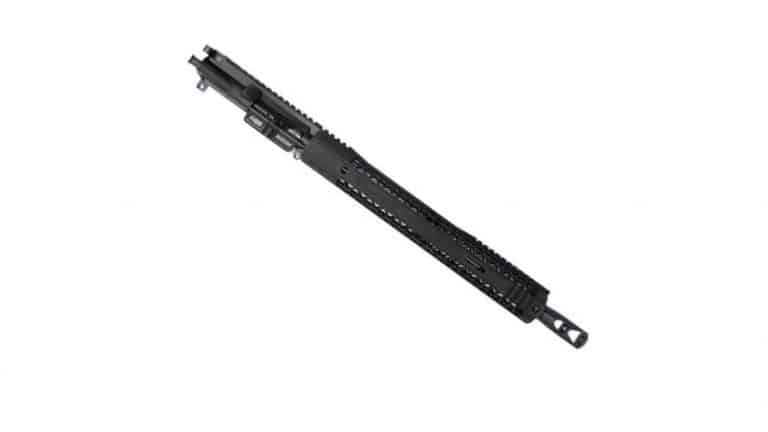 The Black Rain Ordnance SOCOM .458 Complete Upper Receiver might be sneaking up to the higher end of the price spectrum. But it has quite a few really nice touches.

My favorite thing about this upper receiver is the handguard.

It has 3 picatinny rail sections near the muzzle end for various forend accessories.

Overall, the handguard is really comfortable, sturdy, and usable.

I’m also a big fan of the 2-port muzzle brake, which does a good job of keeping the recoil down.

Lastly, the bolt carrier group is nitride coated. And the ejection port cover is laser engraved with “458 Socom.” That way people can see how cool you are. And looking cool matters.

It’s not perfect. But this upper receiver is reasonably upgraded. And it gives you a really good price to performance ratio, if you’re looking to get the most bang for your buck. 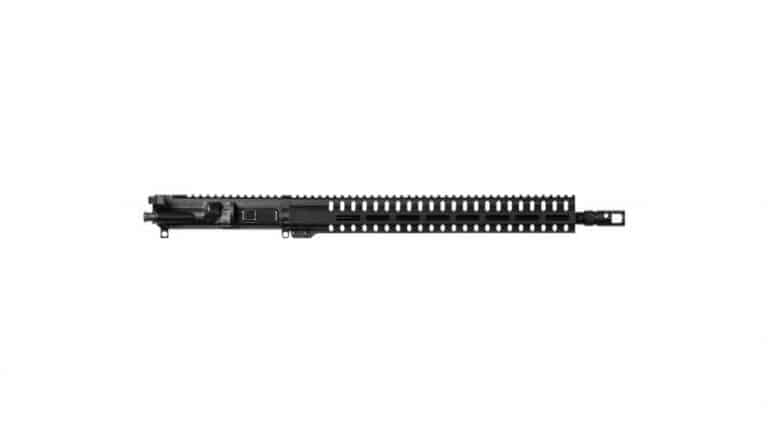 I like CMMG parts a lot. We use a lot of their AR-15 components down at the range. And those components hold up incredibly well. So it makes sense that the CMMG Inc. RESOLUTE 300 Series Upper Receiver Group would be at the top of the heap when it comes to 458 Socom uppers.

There’s no forward assist, which some shooters dislike. But the slick design does reduce weight and snagging potential.

Last two things, then we’ll get out of here:

Lasty, the handguard is comfortable and quite sturdy. But it’s also nothing special. Just a standard M-LOK handguard that does its job.

This CMMG upper receiver is definitely the most expensive of the bunch. But it’s also the most durable and capable of handling any ammunition you stuff into it. So your money definitely gets you plenty of performance.

450 Bushmaster is a cool big bore round designed for semi-automatic rifles. Unfortunately, the 450 Bushmaster magazine selection can be a bit limited. But that doesn’t mean you can’t get good magazines.

If you're looking for good reads, check this article on 30 rounds magazine.

If you still need help deciding, the GLFA AR-15 Complete Upper .458 Socom is a solid 458 Socom upper. And it’s affordable enough to fit most budgets.

Still shooting exclusively 5.56mm? That’s a rookie chambering. You gotta bump that caliber up. Time to get a 458 Socom upper and really start blasting.