If you’ve ever fired 5.56mm, you know it’s surprisingly loud for such a small round, especially from a short barreled rifle. And if you have a muzzle brake, well…

Let’s just say that if you plan on using your AR-15 as a defensive rifle (home defense or otherwise), using a suppressor is a VERY good idea.

If you fire a short rifle with a muzzle brake inside your house, it’s going to do the job. But it’s also going to blow your face off, your family’s face off, and all your dog’s fur off.

Okay, that’s hyperbole. But it’s ridiculously loud and produces a lot of pressure. A suppressor is more than worth the money. And you get tons of cool guy points at the range for running a can on your AR-15. 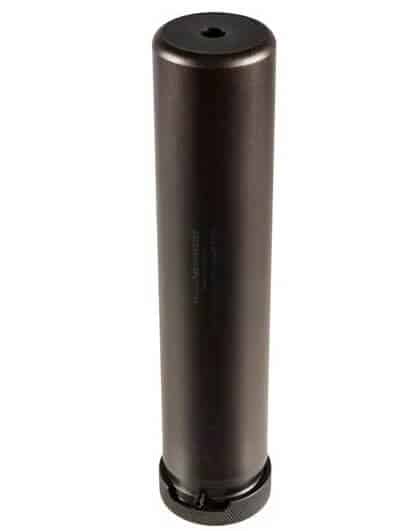 SPOILER—let’s get to the point, then. If you want a solid suppressor that will save your ears (and your family’s faces) from the muzzle blast, get the SilencerCo Specwar 5.56 Suppressor. It does a good job of suppressing 5.56mm. And it’s pretty middle-of-the-road in terms of price.

If you’d like to scope out the other options, keep reading. We’ve rounded up all the best 5.56 suppressors for your perusal.

Top 5.56 Suppressor on the Market Today 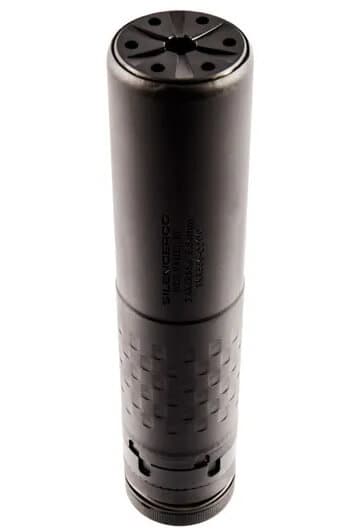 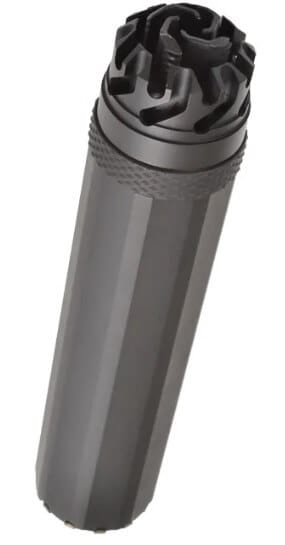 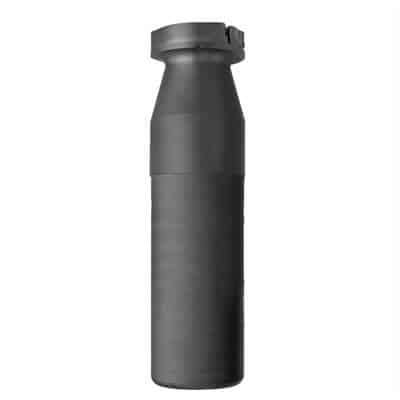 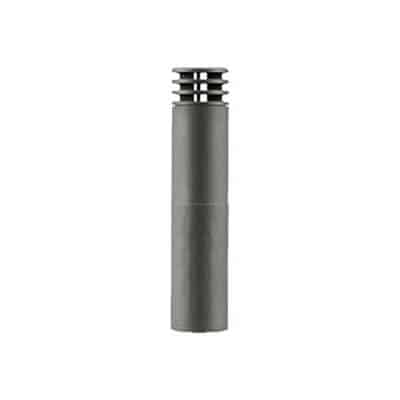 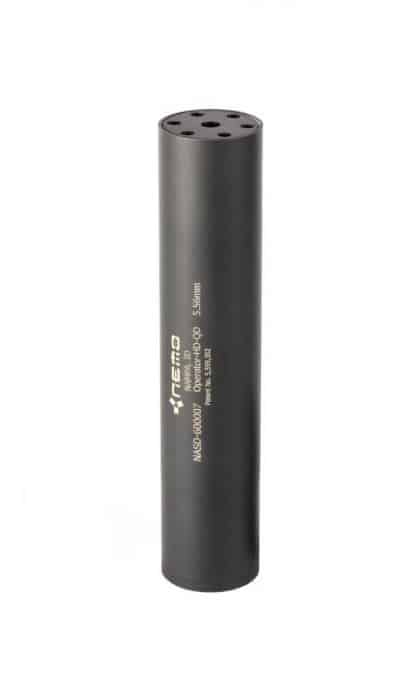 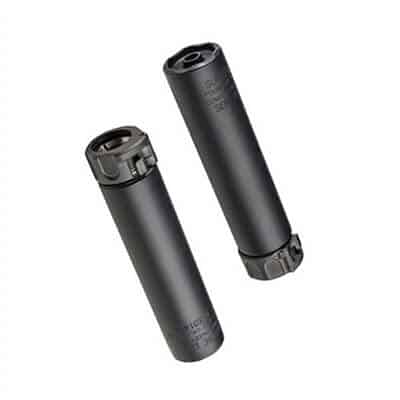 Best 5.56 Suppressor Reviews: Toning It Down

The best 5.56 suppressor is up first. The best runners up are organized in order of price.

The most affordable suppressors are closest to the beginning.

Scroll to the end to see the suppressors for cool guys with the coolest stacks of cash.

Let’s see how these sound.

SilencerCo is one of the cornerstone companies in the suppressor industry. The SilencerCo Specwar 5.56 Suppressor is sort of the median for 5.56mm suppressors. It’s got the right combination of price and performance to make it the ideal all-purpose suppressor.

The sound reduction is good enough. But not GREAT. This suppressor brings the report of a 5.56mm round down to 133 decibels, which is right at the hearing safe level.

The sound suppression is fine for defensive shooting. But you’d still need hearing protection for training or recreation where you’re shooting more than a handful of rounds.

However, this model uses stellite baffles which last longer and require less cleaning than inconel baffles. So this suppressor will give you a very long service life, with minimal required maintenance.

Lastly, SilencerCo has their own TrueBore manufacturing process which is known to produce suppressors that very minimally affect your point of impact. This suppressor will also work well if you need to use your rifle for longer range applications.

In the end, this suppressor is the overall best because all the relevant specs—sound reduction, size (7.3 inches long), and price—are at least slightly better than average. So it’s a suppressor that you could put on any 5.56mm rifle and be satisfied.

The SilencerCo Saker 5.56 Suppressor is one of SilencerCo’s older designs. So you can get them at remarkable prices right now. But it should be noted that the price may change in the future.

First, this silencer brings the report of a 5.56mm round down to 134 decibels. It’s exactly at the hearing safe rating. This is fine for defensive shooting. But don’t go out training or shooting for fun without your hearing protection just because you’ve got this can on your rifle.

This suppressor is also built with SilencerCo’s stellite baffles to reduce cleaning and maintenance requirements. Stellite also increases the service life of your suppressor. So this suppressor gives you a lot of worry free suppressed shooting.

The MAAD end cap is also a flash hider to further reduce the visual signature from your rifle. And the end cap can be swapped out for a different end cap accessory or to replace a damaged cap.

Also, the MAAD mount can also be changed out if you want to use a different mounting option. It makes this a great suppressor for those who want one suppressor for multiple rifles.

Lastly, this suppressor is a mere 6.76 inches long. It’s remarkably compact given how good the sound suppression is. This suppressor will work well on SBRs and home defense guns where keeping the rifle short is important.

Ultimately, this SilencerCo suppressor offers remarkable performance for the current price. But, even at full price, this suppressor is still a great deal that’s ideal for home defense and short tactical rifles.

The OSS BPR26 5.56 Auto Suppressor addresses the issue of back pressure. However, added comfort for the shooter comes with tradeoffs.

Notably, this suppressor reduces the report of a 5.56mm rifle to 136 decibels. It’s technically not quite hearing safe. But it’s just a couple decibels short. So, in a defensive situation, you probably won’t notice.

This suppressor is also 8 inches long. So it’s not as compact as some other models.

However, the added length is because it’s equipped with an end cap that works as a flash hider and reduces back pressure. It reduces your visual signature. And you get less gas in your face when you shoot.

The end cap also has a cool helix design which gives this suppressor an aggressive aesthetic.

This suppressor is also rated for full-auto operation. Most civilians won’t need it. But the reduced back pressure makes this suppressor MUCH more pleasant to use on full-auto rifles.

Most civilians don’t have fully automatic rifles. However, this is still a great suppressor for the money, especially if you have a short rifle that blows a lot of gas in your face when it’s suppressed.

It reduces the report of a 5.56mm rifle to 134 decibels, which is right at the hearing safe level. It’s not as quiet as some larger suppressors. But, even though it’s just 6.8 inches long, it will protect your hearing if you need it to.

Then, it’s constructed from grade 5 titanium. So this suppressor is lighter than most other suppressors. And the titanium lasts longer than stainless steel.

Lastly, this suppressor ships with a Sig Taper-Lok muzzle brake. So it’s ready to install, right out of the box.

This isn’t the quietest suppressor. But it’s very compact. And it’s remarkably affordable. It’s an excellent option for anyone who wants a suppressor for a full-size, all-purpose rifle, or those who have short rifles that they want to keep short.

The SilencerCo Omega Suppressor is easily one of the best multi-caliber suppressors on the market. It’s not too expensive. And the sound suppression is excellent.

This quiets a 5.56mm rifle down to 130.1 decibels. That’s better than hearing safe. And some of the best sound suppression available. It’s still not a good idea to shoot without hearing protection. But it’s great for defensive use.

So this is a great suppressor if you’re looking for a suppressor that will work on an AR-15 and an AR-10 or bolt gun.

Also, this suppressor is just a tad over 7 inches long. It’s not the shortest suppressor around. But it’s fairly compact for a 30 caliber suppressor. And, it’s probably got the best sound suppression of any suppressor this size.

Lastly, this suppressor is made of titanium with stellite baffles for maximum service life and minimum cleaning requirements.

There’s a reason this is the best selling suppressor in history. It’s almost impossible to beat the value this suppressor provides for the money.

The Nemo Arms Operator-HD-QD 5.56 NATO Suppressor is a solid, no-frills suppressor that comes with the nicest muzzle device of any suppressor, I think.

The sound suppression is enough for defensive use with an SBR. Though, wearing hearing protection is still ideal if you’re training or recreating with this suppressor on your rifle.

This model is exactly 7 inches long. It’s compact enough to use on a longer rifle. But it’s just about right for an SBR, since you’ll be at about 16 inches overall with a 10.5 inch barrel.

Overall, this Nemo Arms suppressor performs well. And the included muzzle device is nice even when you’re not running your suppressor.

The Surefire SOCOM556-RC2 Suppressor needs no introduction. It’s the suppressor that the USSOCOM selected as their operational suppressor.

There’s a lot to like about this suppressor. But the sound suppression is only decent. It reduces the report of a 5.56mm rifle to below 140 decibels. It’s designed to work with barrels that are 10 inches or longer. So it may be truly hearing safe with a 16 inch barrel.

Lastly, this suppressor is compatible with all of Surefire’s quick detach muzzle devices, which gives you by far the most options when it comes to which muzzle device you can put on your rifle.

Unfortunately, Surefire muzzle devices are pretty pricey. So plan for that additional cost.

But, even with the extra cost, this Surefire suppressor is an excellent option for tactical professionals and those who want to keep their defensive rifle as short as possible.

A suppressor might make your rifle a bit less compact. But it’s unlikely that you or your family will be wearing hearing protection when you fire your rifle, if you need it for defense. A suppressor protects both you and them from the sound and pressure of firing a rifle inside a house.

If you want a suppressor that will do the job without severely damaging your bank account, get the SilencerCo Specwar 5.56 Suppressor. It’s enough to make your 5.56 rifle hearing safe. And it’s reasonably priced (for a suppressor).

There you have it. If you’re still running a compensator or muzzle brake on your AR-15, it’s time to fix that, and make your rifle safe for everyone (except your target).