The Best 9mm AR 15 Upper for Completing Your 9mm Carbine

9mm carbines are, quite simply, awesome. They’re super fun plinking guns. They make great competition carbines. And you can run a 9mm AR-15 with a suppressor as an outstanding home defense carbine.

They’re also quite affordable if you have the time and expertise to put one together yourself. Also, since it’s basically just an AR-15, it’s easy to put together.

But, running 9mm on the AR-15 platform requires a 9mm bolt and barrel. So you need an upper receiver that will accomodate the specialized parts.

And we’re here to show you which 9mm AR-15 upper is best for this task.

Meets all the mil-spec standards.

SPOILER—If you just want a great 9mm AR-15 upper without hassling with comparisons, get the Rainier Arms Forged Mil-Spec Upper. It’s a solid upper receiver that you can get at a ridiculously low price when it’s on sale. But the full price is also totally reasonable.

If you want to do your own comparisons, keep reading. We’ve collected all the best 9mm AR-15 uppers. So you can sift through them and choose one that suits your needs best. 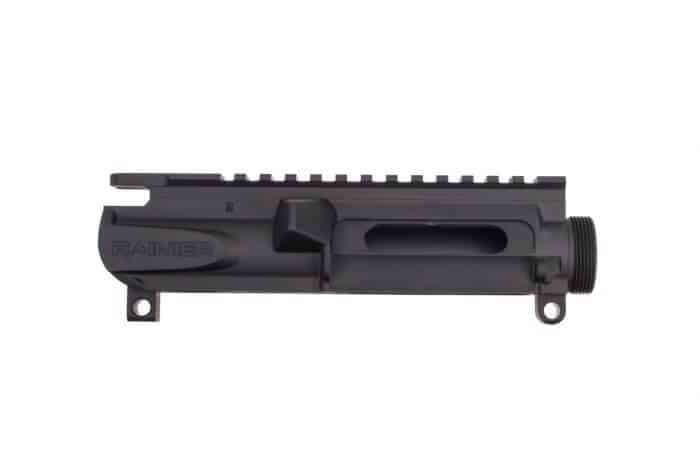 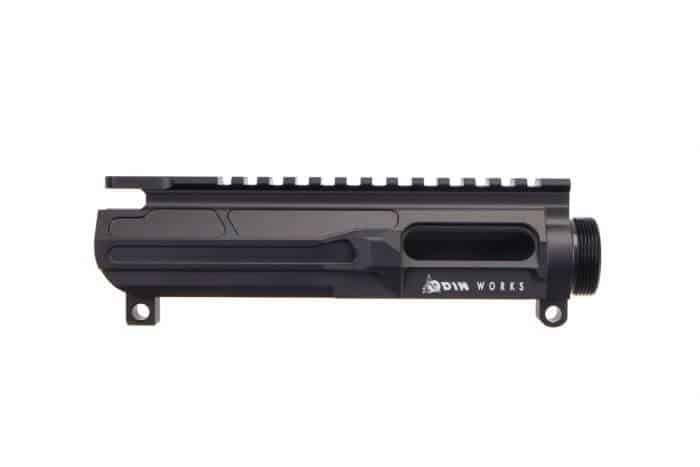 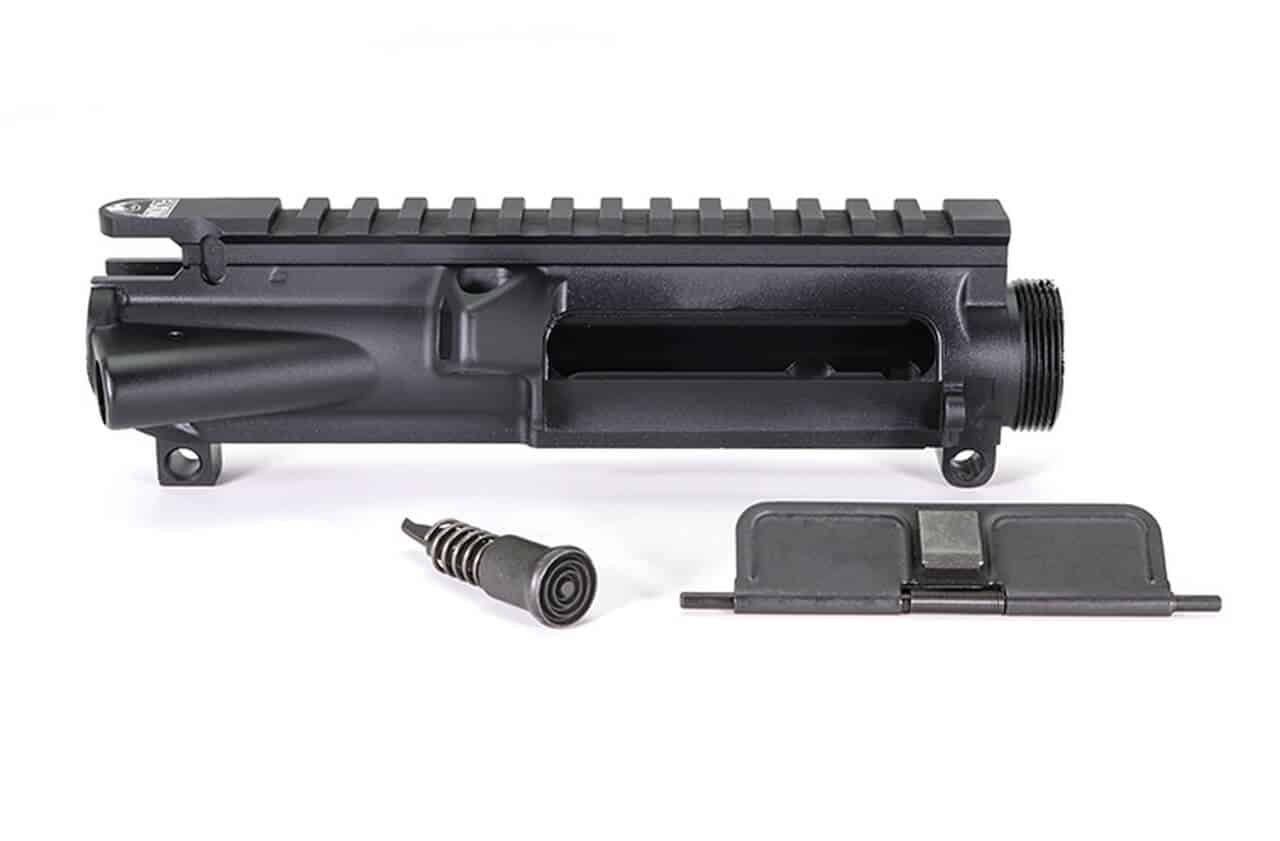 The Best 9mm AR 15 Upper Reviews: The Top Half of Your PCC

Price friendly: near the top.

Budget busting: near the bottom.

Let’s see what we can put together.

Rainier Arms has always produced excellent hardware for surprisingly low prices. And the Rainier Arms Forged Mil-Spec Upper offers the same blend of quality and affordability as all their other parts.

This upper is essentially a mil-spec AR-15 upper receiver that’s been modified for running 9mm. They made the necessary changes and left off all the equipment you don’t need on a pistol caliber carbine.

The ejection port is slightly shorter and wider. And the ejection port cover has been removed to accommodate the way 9mm casings eject off the bolt face. This improves the reliability of your 9mm AR-15, since it helps reduce ejection issues.

Then, the forward assist has been left off. You don’t really need it on a 9mm carbine. And most 9mm bolt carrier groups don’t even have notches for a forward assist anyway. So this saves you some weight bulk that you don’t need.

Unfortunately, these modifications mean that this upper receiver is only compatible with most 9mm AR-15 bolts. Some 9mm bolt carriers are designed to work with standard AR-15 upper receivers. So they may not work with an upper receiver that’s been modified for 9mm specific operation.

But, this upper receiver is well-built and well-priced. And they’re ridiculously affordable when Rainier Arms has them on sale.

Check on OpticsPlanet
Check on Brownells

The Odin Works AR-15 Stripped Billet Upper Receiver is surprisingly affordable, considering how well thought out and high quality it is.

The big deal with this upper receiver is the form factor. It’s very streamlined. But it retains the features of a standard AR-15, unlike many of the slick-side upper receivers that simply do away with certain parts.

This receiver has a low profile brass deflector. So it keeps the brass out of your face. But the side of the upper is much more snag free than a standard AR-15 design.

So this upper receiver makes your rifle much easier to work around your kit, if that’s how you roll. Otherwise, it’s just lighter and more snag-free.

Also, this upper has great aesthetic cuts. It’s got an angular design that gives it a great modern look. And the angles reinforce the structure for a more rigid upper receiver, which promotes better organic precision.

However, the aesthetic may not match a classic AR-15 lower.

But this Odin Works upper receiver will fit on any AR-15 lower receiver. And it’s built to the same standards as a 5.56mm upper. But it’s nice and streamlined, without giving up any of the creature comforts you expect from your AR-15 upper.

Can you use a standard AR upper for 9mm? Yes. You just need a bolt carrier that’s compatible with the ejection port and ejection port cover.

The Faxon Firearms Forged AR Upper Receiver is a great option if you want to run 9mm in a standard AR-15 form factor.

On the surface, this is a standard 7075-T6 aluminum forged upper receiver, which is nice enough on its own.

Additionally, the inside of this upper has been honed for a smoother, more reliable action. This is especially handy since 9mm carbines are usually blowback operated. So less resistance means better reliability.

Lastly, a standard AR-15 upper means that you get all the functionality of a 5.56mm rifle—the ejection port cover and forward assist. And you could change out the barrel and use this upper receiver for a 5.56mm build, which is handy.

However, you need a 9mm bolt carrier that’s compatible with an AR-15 ejection port cover. Otherwise you’ll have to take the dust cover off or always leave it open. Also, the forward assist is pretty much useless on a 9mm AR-15.

But, this Faxon Firearms upper receiver is well-made and reasonably priced. And it retains the exact same function and ergonomics of your ordinary AR-15. 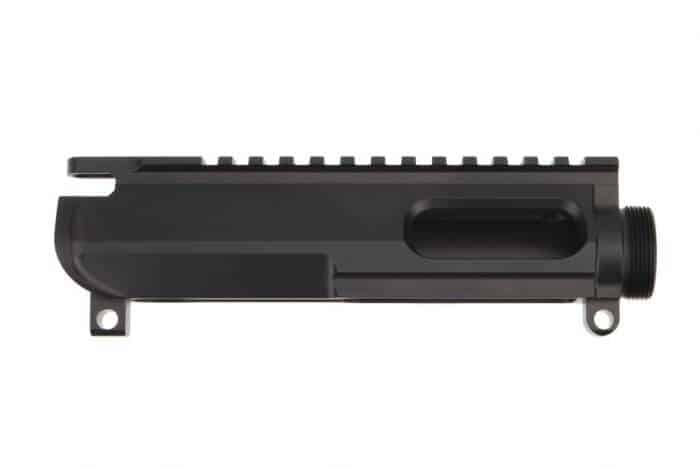 The MVB Industries AR-15 Pistol Caliber Billet Upper Receiver goes all out on the streamlined form factor. It’s simple and extremely snag free. However, it does give up some creature comforts.

On the durability front, this upper receiver is exactly what you’d expect: it’s built to the standards of a 5.56mm upper and machined to ensure proper fit with mil-spec parts.

However, there’s nothing on the outside of this upper receiver.

It’s totally slick. It’s incredibly snag free. And it’s really easy to move it around your body, even while wearing kit. So that’s nice.

Also, the ejection port is extra large to ensure that you won’t have any ejection issues with 9mm casings.

However, I’m left handed. So this MVB Industries upper tends to throw brass at my face because there’s no brass deflector. It’s not such an issue for right handed people. But if you do any offhand shooting, watch out for the brass.

But, for right-handed people, it’s a very small price to pay (if you notice at all) to get a super streamlined and very durable upper receiver. 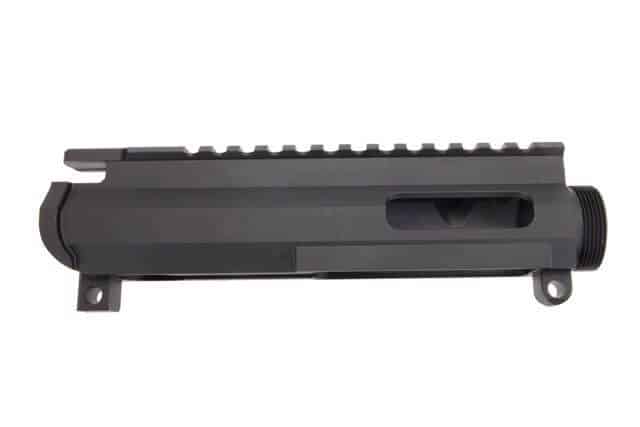 The Angstadt Arms Pistol Caliber Upper Receiver is the upper receiver to get if you want to run pistol calibers other than 9mm. And that’s not unheard of, considering how easy it is to do a caliber conversion on an AR-15.

This upper receiver is built to meet the mil-spec standards for a rifle-caliber upper receiver. So it’s more than durable enough to handle pistol calibers.

However, it’s the only 9mm AR-15 upper receiver that’s also officially compatible with 40 S&W, 357 Sig, 45ACP, and 10mm. So you can use this Angstadt Arms upper receiver to build any sort of pistol caliber carbine that you want.

The ejection port is also extra large. So you won’t have extraction issues with 9mm or any other pistol caliber casings.

But, just like any other slick side upper receiver, you might get brass in your face if you’re left handed or shooting weak handed. It’s not a huge issue, though. Just wear your safety glasses.

Check on OpticsPlanet
Check on Palmetto

The CMMG AR-15 Banshee Upper Receiver is kind of the gold standard for 9mm AR-15 uppers. There are very few 9mm uppers that have more features designed around shooting 9mm.

As you may notice, this upper receiver is complete. All you need to do is slap in on a lower receiver, and you’ve pretty much got a working carbine (be sure to follow barrel-length laws).

And, this 9mm upper enables you to build a 9mm AR-15 with the exact same ergonomics as a standard AR-15.

Most 9mm AR-15 bolts are designed to take Glock or Colt magazines. That means that you need a lower receiver that takes pistol magazines or you need to use a magazine well insert. Either way, the magazine release is usually different than a standard AR-15 lower.

This upper receiver is compatible with both Glock magazines and the CMMG 9 ARC magazine conversion, which enables you to use standard AR-15 magazines in your 9mm carbine. So all the controls and weapon manipulations are exactly the same.

Also, this CMMG upper receiver looks exactly like a standard AR-15 upper receiver. So there are no strange 9mm aesthetics or anything like that. Great paired with a high-quality barrel.

Yes, this option is more expensive than a stripped upper receiver. But it’s the most convenient. And it’s the best way to get a 9mm AR-15 that functions exactly like a rifle caliber AR-15.

A 9mm AR-15 is a super handy carbine to have. It’s cheaper and easier to shoot 9mm than 5.56mm. And a 9mm AR-15 is a perfectly viable defensive carbine that’s easy to suppress.

If you’re looking to get into the world of 9mm carbines without much waffling or fuss, get the Rainier Arms Forged Mil-Spec Upper. It’s a quality 9mm AR-15 upper that’s designed for durability and reliability. And they’re really reasonably priced.

So, if you’re still only shooting 5.56mm out of your AR-15, it’s time to broaden your horizons. Get a 9mm AR-15 upper and start building a 9mm carbine that will give you more fun per dollar than you thought possible.