The Best 9mm AR Lower for Your AR PCC

Also, 9mm AR carbines are easy to build. And you can feed them with Glock magazines, which are affordable and plentiful.

But, putting a pistol cartridge into a rifle platform requires a bit of nuance and tuning. Your lower receiver is critical when you’re building a 9mm AR, because magazine stability is critical for reliability.

So getting the best 9mm AR lower for your AR pistol caliber carbine or pistol caliber pistol (Hello, ATF) is a vital step in the process of building a 9mm AR carbine.

SPOILER—if you just want to get a solid 9mm AR lower and get to building, get the CMMG AR-15 9MM Dedicated Lower Receiver. The CMMG 9mm AR system is one of the best on the market. And their 9mm AR components are some of the best you can get.

But, if you’d like something fancier or more affordable, read along. We’ve curated all the best 9mm AR lowers on the internet for you to evaluate. 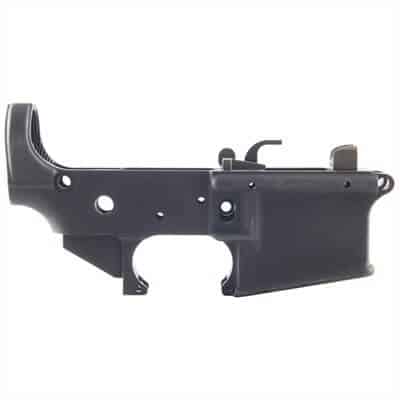 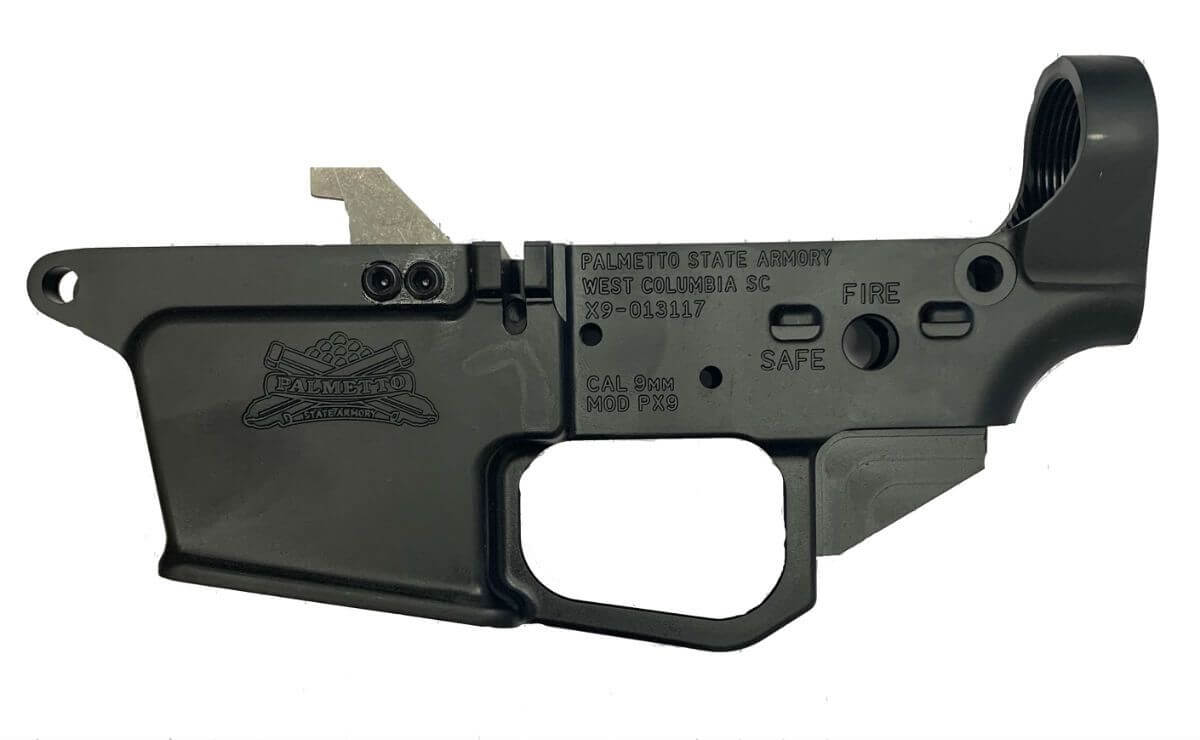 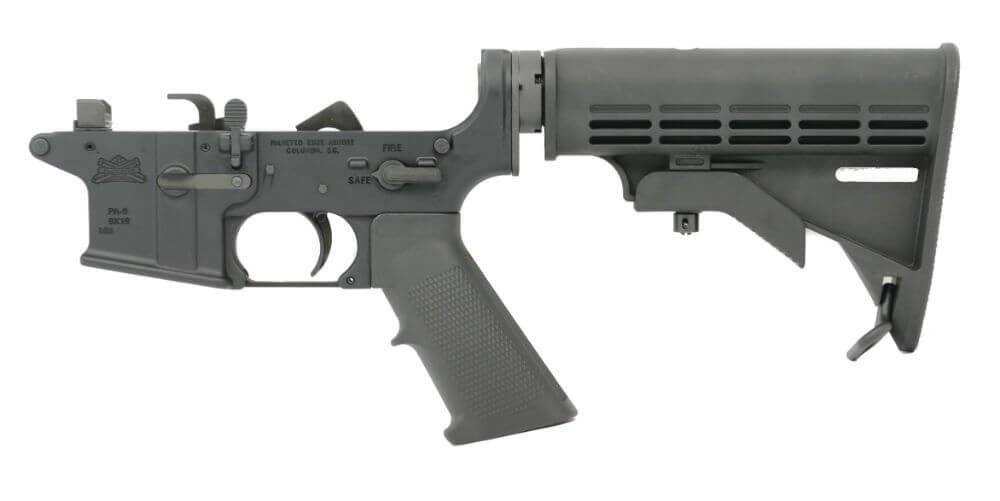 Best 9mm AR Lower: Finest Base for Your AR PCC

The 9mm AR lower receivers for everyone are first on the list.

The most exclusive 9mm AR lower receivers are near the end.

Read the reviews that match your budget.

The CMMG Banshee is one of the premier 9mm AR carbines on the market. The CMMG AR-15 9MM Dedicated Lower Receiver is basically the lower half of a Banshee carbine.

Additionally, this lower receiver has all the bolt interface hardware for shooting 9mm from an AR-15 platform. The feed ramp, ejector, and bolt catch are all included with this lower receiver. So you get reliable operation and a proper last-round bolt hold open.

The other thing about CMMG components that I like is the teflon coating. This receiver is hardcoat anodized. The teflon coating protects the finish from scuffs and scratches. The teflon also reduces friction for more reliable feeding and bolt movement.

Last thing: this is a really solid lower receiver, which is actually quite affordable, considering the quality.

The only real downside is the Colt SMG magazine compatibility (even though it has upsides in terms of reliability). You’ll probably need to buy some magazines if you use this lower receiver, since it’s unlikely that you already have Colt SMG magazines laying around.

However, this is still a great 9mm AR lower receiver. And you can get aftermarket Colt SMG magazines that are affordable and reliable.

The PSA PX-9 Forged Stripped Lower with Mag Catch Assembly and Ejector is easily one of the most affordable 9mm AR lower receivers on the market, especially when it’s on sale (which it often is). But it’s not just a cheap 9mm lower receiver.

This lower receiver includes a 9mm ejector. However, it does not include a feed ramp or bolt catch.

In other news, this lower receiver has an integrated trigger guard, which is flared for easier operation with gloves.

The biggest downside to this PSA lower receiver is that there’s no last-round bolt hold open. But maybe that comes with the territory of a budget lower receiver.

If you need an affordable 9mm AR lower receiver, though, this is a good way to go.

The PSA 9MM Classic Colt-Style Magazine Lower is a step up from the PSA PX-9 lower receiver in terms of price. However, the increased price comes with benefits that you don’t get from a lower priced model.

If you used a standard AR-15 lower receiver, it would cost between $75 and $100 to get the proper magazine compatibility. So you’ll at least break even with this receiver when it comes to getting complete functionality.

Additionally, this lower receiver includes a lower parts kit, trigger group, and furniture. It’s a complete lower receiver that you can slap on a 9mm upper and go.

When you consider all the costs of building a functional 9mm AR carbine, this lower receiver might be the most affordable option.

I have one complain and one caveat with this lower receiver, though:

First, the complaint: everything is pretty much mil-spec. So you’re not getting anything special in terms of component quality or design. But mil-spec stuff works fine. It’s just not great.

Then, the caveat: I’ve received PSA firearms that have assembly errors.

They’re not huge issues. Most of the time, assembly issues can be corrected in a few minutes if you have basic gunsmithing skills. But, if you fire the gun before you correct the issue, it can become costly damage.

I recommend inspecting this lower receiver before you get to shooting.

Other than that, this is a really affordable option that gets you about halfway to a complete AR 9mm carbine. 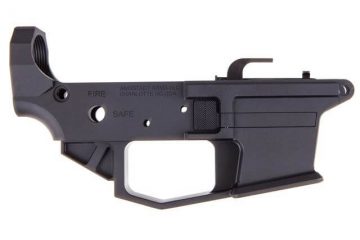 The Angstadt Arms AR-15 Lower Receiver is a well-designed lower receiver that offers a few improvements that will make your 9mm AR a lot easier to operate.

The main thing about this lower receiver is that it comes with most of the hardware you need for pistol magazine compatibility. The only thing you need is a bolt catch, which is part of your lower parts kit.

Speaking of the magazine, this lower receiver also includes a last-round bolt hold open. So the functionality is pretty much identical to a standard AR-15.

On the underside, this lower receiver has an integrated, flared trigger guard. That way you get quick access to your trigger, even while wearing thick gloves.

Lastly, the magazine well has a pretty wide flare to make reloads easier and faster.

This Angstadt lower is a tad on the heavy side, because it’s so beefy. But it’s an excellent lower receiver for anyone who wants to build a pistol caliber AR that takes Glock magazines. 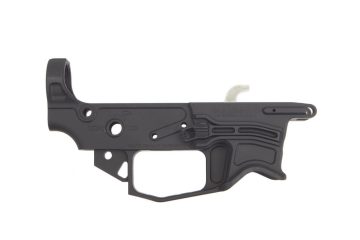 The Battle Arms BAD9-LW Glock 9MM AR Billet Lower Receiver takes advantage of the smaller pistol magazine well to remove as much metal as possible, which makes for the lightest lower receiver possible.

Most of this lower receiver has skeletonized cuts that reduce the weight.

However, Battle Arms Development did more than just lower the weight. They also built this lower receiver with a massive space for your trigger finger. The trigger guard is flared. But the trigger port is enlarged inside the lower receiver as well.

All told, the weight reduction brings this lower receiver down to 7.9 ounces.

Additionally, the magazine well is flared. And it’s contoured to make it easier to seat your magazine for faster reloads.

But, if you’re building a lightweight pistol caliber carbine, and don’t mind racking your bolt a bit more often, this Battle Arms model is an excellent lower receiver to start with. 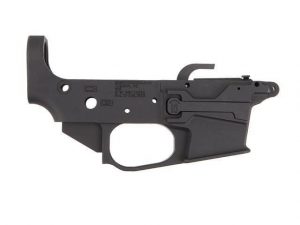 The Quarter Circle 10 AR-15 Ranger (GSF) Stripped Lower Receiver is one of the few 9mm AR lower receivers that is built for long range precision, or—at least—precision at the longest ranges possible with 9mm.

There’s no magic in this barrel.

JP Enterprises simply manufactures their barrels to incredibly high standards and uses advanced techniques that you simply don’t get in a less expensive barrel.

Also, this isn’t just a really high-grade barrel. It also comes with a matched JP EnhancedBolt. There’s no need to headspace your barrel. Just plug and play.

The JP EnhancedBolt is no slouch either. It’s a remarkably reliable bolt that produces outstanding precision.

Ultimately, this barrel might be expensive. But it’s a complete package that will produce a competition-ready rifle as soon as it’s installed. And while you're at it, throw in a high-capacity magazine to boot. 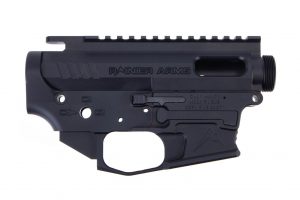 I had to throw the Rainier Arms 9mm Billet Receiver Set in the mix because I’m a shameless Rainier Arms shill. Just kidding. Yes, I’m a fan of Rainier Arms hardware. But this is a legitimately great 9mm AR receiver set.

This receiver set includes the magazine release and an ambidextrous bolt release. And there’s an integrated ejector and last-round bolt hold open. All you need is a few parts from a lower parts kit.

Additionally, the lower receiver has an integrated trigger guard, which is flared to give you space for your trigger finger, no matter what.

Also, this receiver set is milled to keep the weight as low as possible. However, the lower receiver is still rather beefy. It weighs 12.4 ounces. Basically, this is not the best receiver set for a lightweight build.

But this receiver set accepts Glock magazines. And the beefy construction makes it a remarkably rigid receiver set, which delivers excellent precision.

The aesthetic of this Rainier Arms receiver set is a bit aggressive (some might even say “space age”). But it’s an excellent receiver set that’s remarkably well constructed.

9mm AR carbines are super cool. But one of the biggest challenges with 9mm AR carbines is the magazine interface. So you need the best 9mm AR lower you can get to ensure that your pistol magazines fit well and deliver reliable operation.

To that end, if you want a solid 9mm AR lower that’s not stupidly expensive, get the CMMG AR-15 9MM Dedicated Lower Receiver. It’s got all the stuff you want from a 9mm AR lower. And CMMG makes exceptionally high quality components. So it’s a good deal.

If you’ve got that 9mm upper, or you’re ready to start building your 9mm AR carbine, it’s time to stop stalling. Get a great 9mm AR lower. And you’ll get a great carbine when you’re finished.