The Best AR 15 Ammo for All Your Shooting

AR-15 rifles are much more reliable than they used to be. There was a time when AR-15s were picky about ammunition. Nowadays, AR-15s eat most things.

However, that doesn’t mean you should put terrible ammunition in your rifle.

If you go too cheap, at the very least your rifle will get dirtier faster.

And, certain low grade ammunitions use primers and powder that are more corrosive, which can shorten the life of your rifle if you shoot enough of that cheap ammunition.

Then there’s the issue of bi-metal jackets, which use a very thin layer of copper to coat a steel jacket, which can wear your barrel out faster. 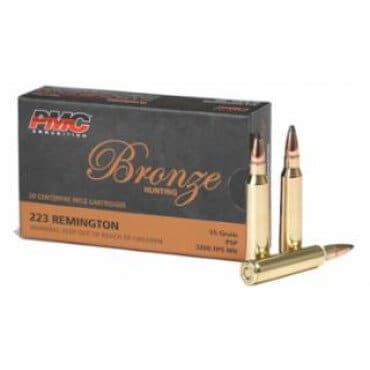 SPOILER—if you want some decent all-purpose ammunition, get the PMC Bronze 223 Remington 55GR SP Ammunition. It’s reasonably affordable. And you could conceivably use it for everything, if you used just one type of ammunition for all your shooting.

If you have specific needs for your ammunition, we’ve got more reading for you. We’ll cover all the best AR-15 ammo, so you can get what you need. 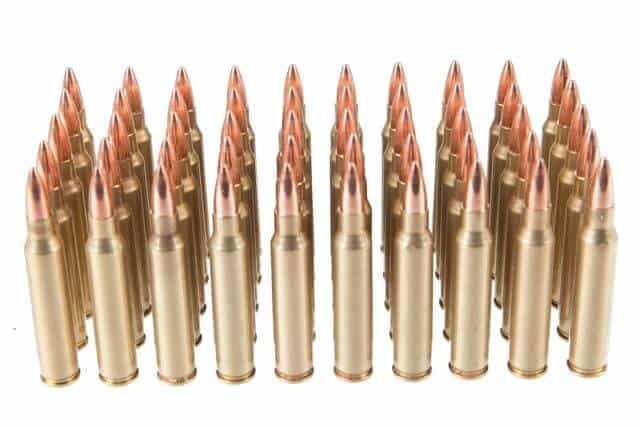 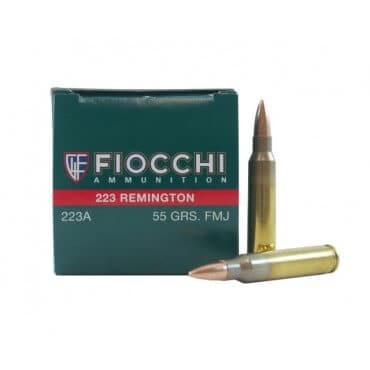 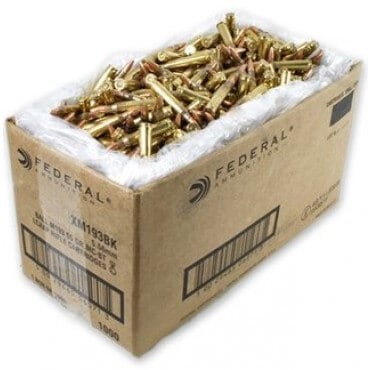 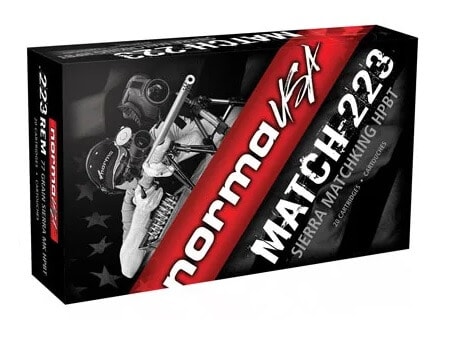 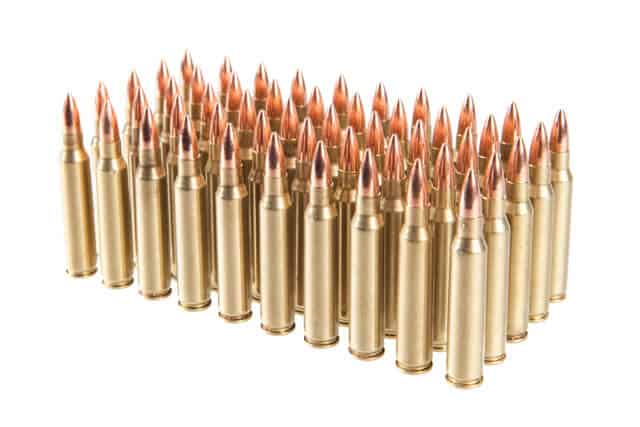 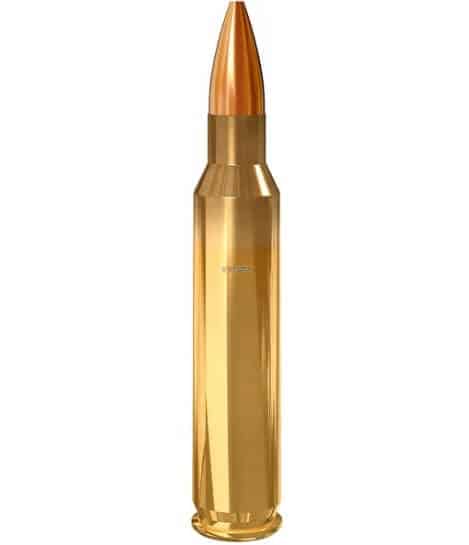 The best AR-15 ammo is up for overview first. The other best ammo is arranged in order of price.

The best ammunition for shooting on the cheap is near the top.

The ammunition that’s best for paying top dollar per round is near the bottom.

Time to pop off a few shots.

PMC has been making affordable ammunition for quite a while now. Some people knock this ammo. But I’ve never had a problem with it. And I’ve never seen anyone else have any serious issues with PMC ammunition.

So the PMC Bronze 223 Remington 55GR SP Ammunition is a totally viable option for one-size-fits-all ammunition.

It may not be THE BEST defensive ammunition. But it’s still a rifle round. And soft point ammunition will do tons of work if you need to use your rifle for defense.

And it’s brass cased. So you won’t get the sort of fouling and barrel wear that you get with super cheap steel-cased ammunition.

But it’s not so expensive that you couldn’t use it for training. It might cost you a bit more. But you could conceivably train with the same ammunition that you use for self-defense. That way your rifle will perform exactly the way you expect, no matter what sort of shooting you’re doing.

Unfortunately, it can be tough to find this ammunition in bulk. So you might not be able to get the bulk discount. But it’s still solid ammunition that could be your one-size-fits-all ammunition.

Most of this ammunition is reloaded from once-fired brass. So the casings are in good shape. You won’t get feeding, extraction, or ejection issues caused by overused brass that’s been reloaded.

And the primers and powder run very clean. This rifle won’t foul your rifle any more than factory ammunition.

Also, this ammunition is loaded decently hot. The muzzle velocity is 3050 feet per second from a 16-inch barrel. It’s not the fastest around. But it’s consistent. And it’s good enough for any sort of training you need to do.

This ammunition uses Hornady 55GR full metal jacket boat tail bullets. So it’s not ideal for defense or long-range precision. But it’s great, affordable training ammunition that will perform similarly to your defensive or competition ammunition.

And the Hornady bullets use an all-copper jacket that minimizes wear on the bore of your barrel, which helps get the longest service life from your barrel.

But this is excellent remanufactured ammunition that’ll work reliably for you.

If you’re not into shooting remanufactured ammunition, there are affordable alternatives. Fiocchi Shooting Dynamics .223 Rem 55GR FMJ Ammo is probably the factory new ammunition that I shoot the most. It’s affordable and it works fine for most types of shooting.

It’s brass-cased ammunition. So it runs reliably. This ammunition has never caused me any problems. And you can use the brass for reloading, if you make your own ammunition.

The boat tail bullets have an all-copper jacket. They wear your barrel down less than bullets that use a copper coating over a steel jacket rather than a complete copper jacket. Less wear means longer barrel life.

And these rounds produce excellent muzzle velocities. And the brass has been treated to help ensure reliable fire forming.

So these rounds measure around 3240 feet per second, which is faster than many competing munitions.

The velocities are quite consistent, too. The performance is perfectly predictable from shot to shot.

It’s still just full metal jacket boat tail ammunition with a 55 grain round. It’s not great for self-defense. And a heavier round would be better for long-range precision. But this ammunition works great for training and recreation.

This Fiocchi ammunition is nothing fancy. But, if you need reliable training ammunition, this is a great round to use as your go-to, as long as you don’t need a heavy bullet.

Mil-spec is a pretty overused term. In this case mil-spec means that this ammunition performs well in AR-15 rifles with barrels that are between 14.5 and 20 inches, the standard military configurations.

It’s still totally reliable in short-barreled rifles. But you might get muzzle velocities that produce suboptimal ballistic performance at longer distances.

If you use a full-length barrel, this ammunition pushes about 3100 feet per second from the muzzle, which is decent muzzle velocity. And it’s pretty consistent from shot to shot.

However, this is brass cased ammunition that’s designed for reliability. And it does run reliably. I hear a lot of people mock this ammunition. But I rarely see or experience any issues with it. It even works fine in full-auto rifles.

And the bullets have a total copper jacket to minimize barrel wear. This ammunition does make your rifle fairly dirty, though. So remember to clean your gun.

There are only a couple things to be aware of with this ammunition:

The bullets have steel cores. Some shooting ranges won’t let you shoot steel core ammunition because it tears up steel targets and barriers pretty badly. If you have your own steel targets, keep that in mind before you blast them with this ammunition.

Also, these are 55 grain bullets. The true military rounds fire 62 grain projectiles. A heavier bullet would make this ammunition better for shooting at longer distances.

But it’s still solid ammunition that’s great for most range work and training.

As you’d expect from match grade-ammunition, this ammunition uses brass casings that are carefully inspected to ensure maximum reliability and fire forming for consistent performance.

The brass is also excellent for reloading. So you can save yourself some money down the road.

But, the 77 grain Sierra Matchking bullet is an excellent hollow-point boat tail round that carries its energy further than a lighter, faster round. And it’s less wind affected than lighter bullets. That’s why this is excellent ammunition for competitive shooters who need precision at long ranges.

It’s also solid tactical ammunition. At short ranges, the muzzle velocity is high enough to get good ballistic efficiency. And this is a hollow point round. So it performs better than most full metal jacket rounds in tactical contexts.

Lastly, this ammunition is quite affordable for match-grade ammunition that’s packed with such a high quality bullet.

It’s a bit pricey to use as training ammunition. But it’s an excellent value for any type of shooting where you need true game-time performance.

The casings are nickel, which are just as good as brass casings in terms of performance and reliability.

However, some say that nickel is more difficult to reload. I’ve never had an issue reloading nickel casings. But brass is considered the gold standard for reloading.

But the performance from these rounds is consistently excellent. From a 16 inch barrel, this ammunition produces muzzle velocities of 2950 feet per second.

But 62 grains is a decent compromise between high velocity and long range stability. It won’t get blown around as much as a 55 grain bullet. And it’s faster than a 77 grain round. That’s a good middle ground.

The bullet is a standard full metal jacket bullet with a boat tail. I’d prefer a hollow point round for tactical applications. But the full metal jacket round works well enough. And it’s got a total copper jacket to minimize barrel wear.

This Doubletap ammunition is probably too expensive for most to use as training ammunition. But the nice thing about this ammunition is that you can use cheaper 62 grain ammo for practice. And your training and duty ammunition will perform very similarly.

If you need truly match-grade ammunition, Lapua 69GR HPBT Rifle Ammunition is the way to go. This ammunition is specifically designed for shooting out to 500 yards or more.

It’s match-grade ammunition. So the casings are brass. And it runs reliably. Lapua brass is also excellent for reloading.

The 69 grain hollow-point boat tail round delivers an excellent blend of muzzle velocity and stability. It’s not quite as stable as a 77 grain round. But it’s also faster. However, it still performs extremely well from long barrels with faster rates of twist.

You could use this ammunition for tactical applications. The hollow point round and relatively high muzzle velocity would definitely do the job.

However, this Lapua ammunition is pretty expensive. And it’s just much better suited to long range shooting.

But, if you have an AR-15 that’s designed for long range precision, this ammunition will absolutely maximize your precision at the very edge of your rifle’s capabilities.

The Bottom of the Magazine

Buying ammunition is always a compromise between performance and affordability. Most of us can prioritize affordability, especially for AR-15 ammunition.

Modern AR-15 rifles aren’t picky about ammunition. And it’s easy to shoot a lot. So cost-efficiency is the biggest factor in buying ammunition.

If you want solid ammunition that strikes an excellent balance between price and performance, get the PMC Bronze 223 Remington 55GR SP Ammunition. It runs well. And it’s reasonably priced soft-point ammunition. So you could use this ammunition as your all-purpose ammunition for tactical, defensive, and training.

Your rifle is just a paperweight without ammunition. Get some ammunition. And stop making your AR-15 sit in the safe like a sad paperweight. That’s mean.