There was a time when the AR-15 was almost strictly a short to medium range platform. However, AR-15s come in more chamberings than ever. Even the standard 5.56mm round is quite capable at long range, with modern ammunition. So, it pays to have the best AR-15 bipod for your rifle, these days.

Shooting from a benchrest is the best way to get long range accuracy. There’s no contest. But, benches are really heavy and hard to carry around.

Sandbags and backpacks make good improvised benchrests, and a sling can help you get better accuracy from standing and kneeling positions. But, the reality is that sometimes these options aren’t available.

That’s where the bipod comes in handy. It turns your rifle into a more self-contained platform. With a bipod, everything you need to shoot in almost any condition is right there on your gun. So, you can take the shot regardless of what else you’re carrying.

Now, there are a ton of bipod options on the market. If you want to go pick up a bipod right now, get the CCOP Tactical Hunting Rifle Bipod. It’s a durable, but still fairly light, bipod that runs on the more affordable end of the spectrum.

If you’re interested in seeing all your options, we’ll cover them here, so you can make the best possible decision 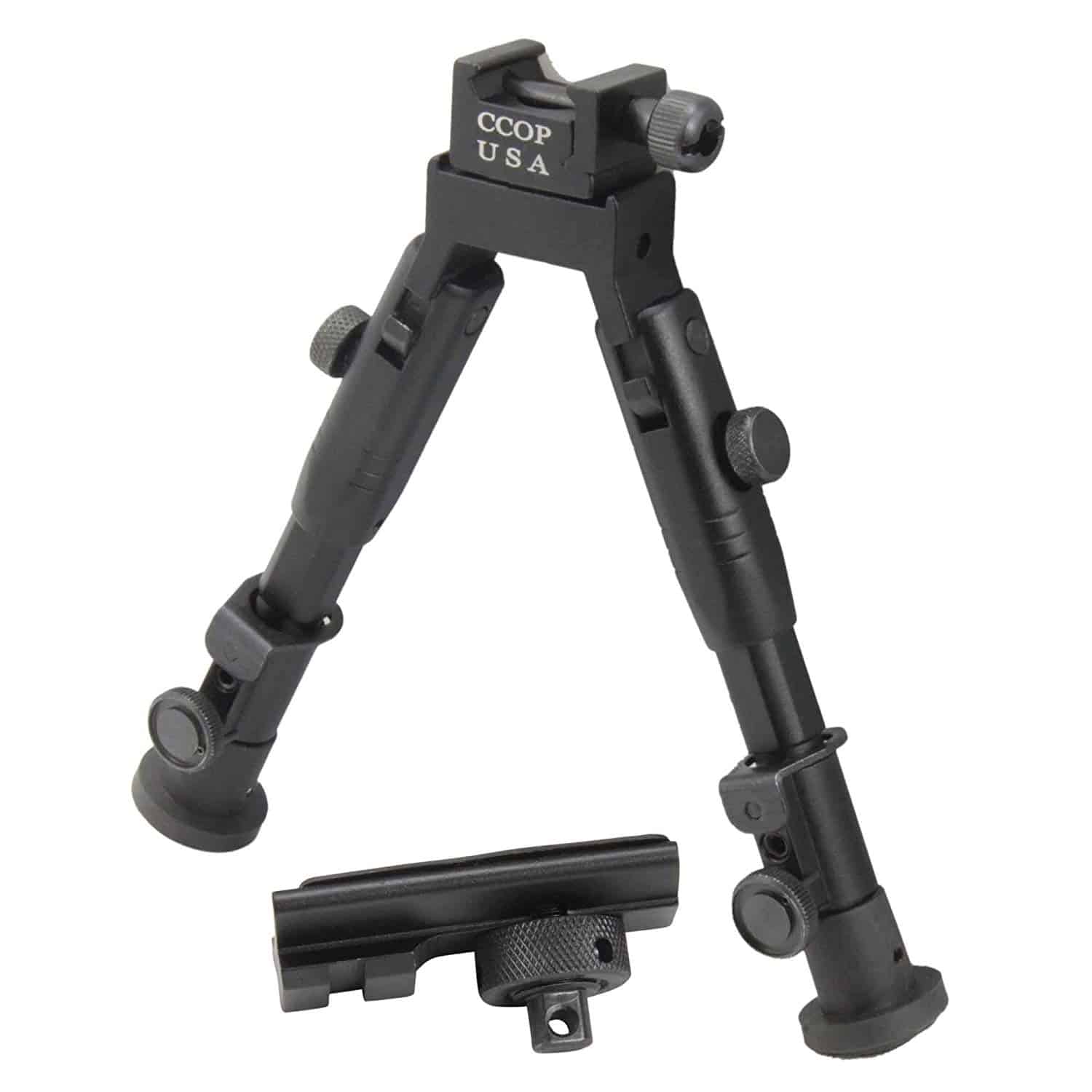 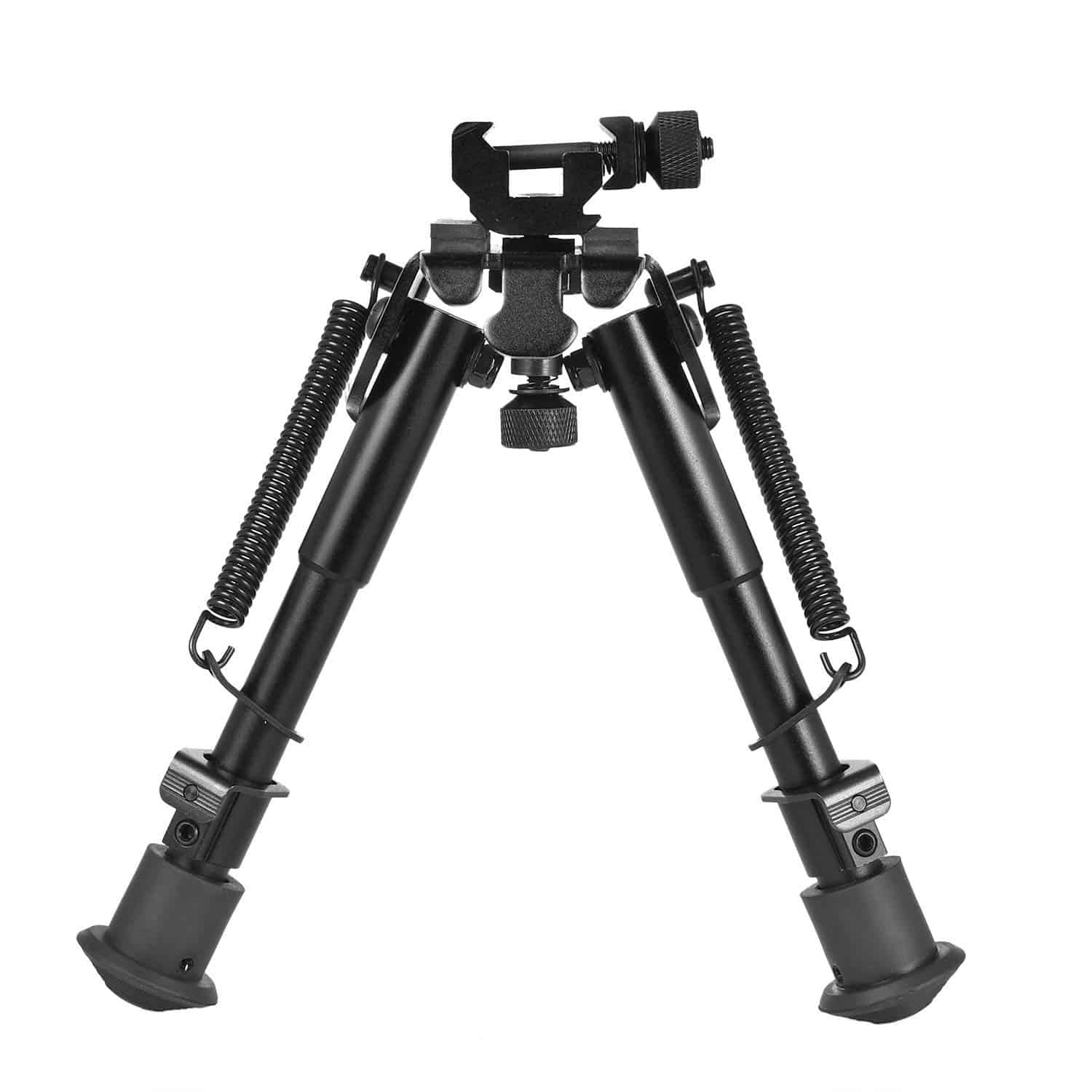 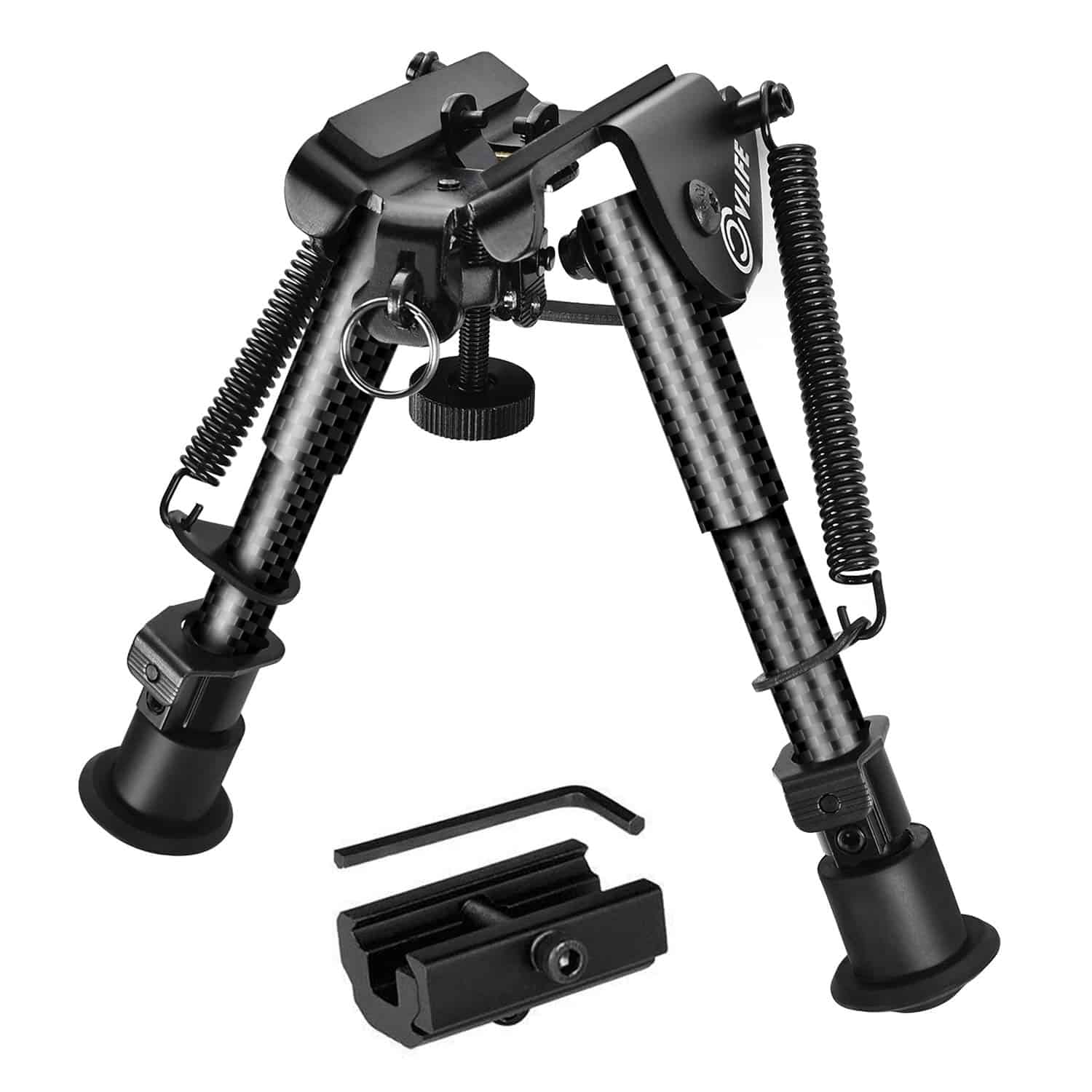 There’s a bipod for every rifle. We’ll start with our reigning bipod champion, and work our way through therestinorder of price. If you’ve got a nice, budget rifle, check the bipods at the beginning.Those of you with bank-breaking custom builds will find what you need near the end.

The trick with bipods is balancing the durability and adjustability with the weight. Too much bipod makes for a very front-heavy rifle that can be uncomfortable to lug around.

That’s why CCOP used steel and aluminum strategically when they built the CCOP Tactical Hunting Rifle Bipod. The combination of metals creates a very strong, but lightweight bipod.

Let’s start with the construction. CCOP used steel for all the load bearing parts. The swivel pins for the legs, the picatinny mount, and locking mechanisms are steel. This ensures the bipod will hold up for a long time. All the parts that never receive any friction wear or shear forces are forged from aluminum to keep the weight as low as possible.

The result is a nice rigid bipod that won’t imbalance your rifle or wear you out during long hikes or unsupported shooting.

The legs lock in the folded or open positions with a mechanical lock, rather than spring tension. So, the bipod legs can’t snag and be yanked open unintentionally. This is really nice if you hike in the forest with your rifle or use it with any sort of tactical kit that the legs might snag on.

However, this means it takes slightly longer to deploy this bipod. So, keep that in mind if you’re running and gunning a lot.

As is standard, the legs are fully adjustable and capped with rubber feet that keep the bipod from sliding while it’s supporting your rifle. There’s also an adaptor for those of you that use handguards without rails. So, you can use this bipod on almost any rifle.

If there’s any downside to this rifle, it’s that everything it a bit too secure. There are no quick adjustment mechanisms. Everything locks in tight. So, it may not be ideal for those who often need to quickly reconfigure their bipod.

But, in the end, this is a tough bipod from CCOP to beat in terms of quality and price. However, it is a bit better suited to long range shooters who shoot in slower moving contexts.

The CVLIFE Tactical Rifle Bipod is a great, all-purpose bipod that comes at a great price. It may not be the best bipod for any one shooting context. But it’ll get you through most supported shooting positions.

One of the big strengths of this model is that it’s extremely light. It’s got steel where it matters: in the pins, springs, and locking mechanisms. But, CVLIFE used as much aluminum as possible, and the legs are hollow tubes rather than solid shafts.

So, this bipod is one of the lightest on the market. But, that does cost a bit of durability. But, don’t worry, it will hold up under all but the most abusive shooting conditions.

Next up: operation. This bipod works almost entirely on spring tension. So, it’s very quick to deploy, adjust, and fold up.

Though, since the bipod locks into position with spring tension, it’s possible for the bipod to snag on something and pop open or fold up.

However, there’s a swivel on the mount that enables the bipod to turn 360 degrees, which gives you a lot of flexibility in where you can set this bipod. The mount itself requires a rail. Unfortunately, there’s no adaptorfor mounting the bipod without a rail.

Overall, this bipod is a great deal. The price is excellent, and the bipod itself is versatile and capable. A great option for those who need gear for stabilized shooting, but don’t exclusively shoot long range.

CVLIFE doubled down on the lightweight aspect of their Tactical Rifle Bipod. With the CVLIFE Carbon Fiber Rifle Bipod, CVLIFE replaced much of the aluminum with carbon fiber to further reduce the weight.

The outer sleeves of the legs are carbon fiber. However, all the important parts—mounting brackets, pins, springs—are still made of steel. But, this bipod is extremely light, and still very durable, thanks to carbon fiber.

CVLIFE upgraded the mount with an improved tension spring for a more secure hold on your rifle. However, the mount does not enable the bipod to swivel.

All this adds up to create a bipod that’s capable, light, and durable. It’s an affordable option for a tactical rifle where weight reduction is important, but long range performance is still valuable. 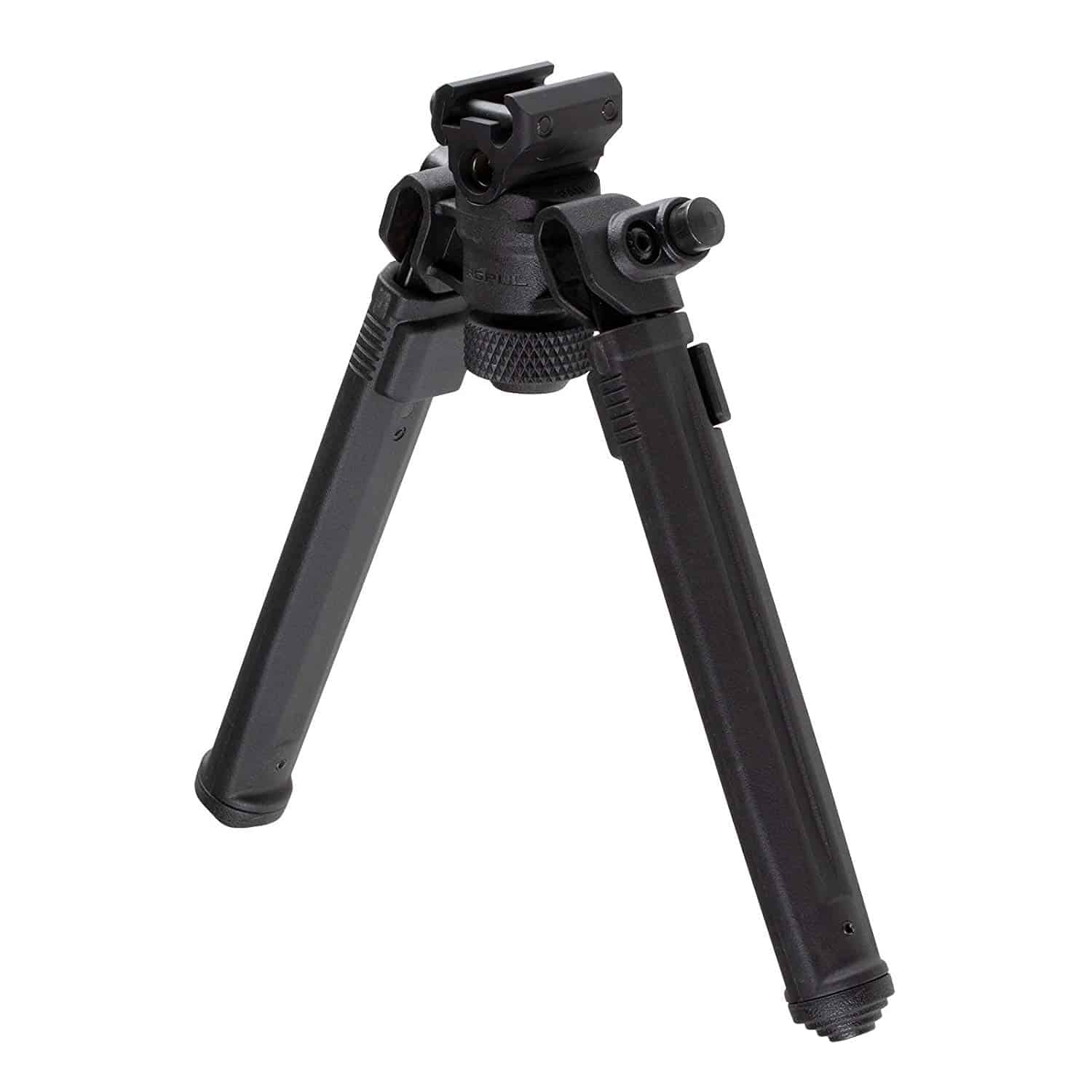 Magpul built the Magpul Rifle Bipod to be useful regardless of whether it’s deployed or folded. It’s a very innovative approach that maximizes the benefit of every ounce of weigh your bipod adds to your rifle.

First, one unique thing about this bipod it’s largely constructed from polymer. Magpul used metal where it matters. But, polymer is lighter and just as strong as aluminum. So, most parts that are traditionally made of aluminum are polymer. It makes this bipod extremely light, but still durable.

This bipod adjusts with a push-button mechanism, which is fast and easy to use. The legs have 7 length adjustment notches that enable the legs to extend from 6.3 inches to 10 inches. It’s one of the broadest adjustment ranges on the market, and very few bipods extend to 10 inches.

The mount also allows your rifle to tilt up to 50 degrees, and pan 40 degrees without lifting or moving the bipod feet. It gives you a great shooting platform for engaging moving and widely spaced targets.While the bipod is folded, the locking knob is capped with rubber to provide a stable, quiet forward rest. So, even if you don’t need the elevation of a bipod, this model is still useful.

The feet are textured rubber that hold fast on any surface. The feet are even useful for stabilizing your rifle against a vertical service.

Although this bipod is a bit pricey, it’s one of the best bipods for both long range and mid-range tactical shooting. It’s a great Magpul option for any high-end tactical rifle. 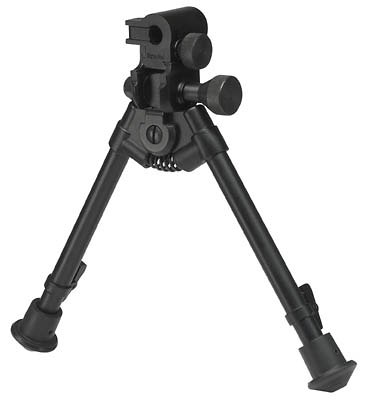 One of the big struggles with bipods is that many of them have fixed mounts. So, you have to lift the bipod and shift the feet to change the aiming point of your rifle. The Versa-Pod Model 52 Bipod solves this with an extremely articulate mounting system.

The essentials of this bipod are solid: a lot of steel construction and mechanical locks. However, the solid build does make this a rather heavy piece. So, it might make your rifle a bit front heavy.

The barrel is the civilian standard 16 inches. It comes with a 1 in 7 twist rate for better performance with heavier ammunition, and a melonite coating for more durability.

This setup performs well in most contexts, be it hunting, competition, or tactical shooting.

Radical Firearms also applied their melonite coating to the bolt carrier group to improve the reliability and longevity of the rifle. The lower receiver is built entirely with a mil-spec parts kit, but models are available with pistol grip and stock upgrades pre-installed.

The RF 16 comes with an M-LOK rail system that’s impressive for the price and will accept forend attachments in almost any position, which provides excellent customizability. The RF 16 doesn’t come with any optics or sights, but the full-length rail system is prepared to accept optics.

For a budget tactical, competition, or hunting rifle, the RF 16 is quite capable and boasts a lot of quality at this price point.

Whether you’re running a tactical rifle or a designated marksman rifle, a bipod makes it easier to set up for stable mid-range and long range shots. So, unless your AR-15 is built exclusively for close quarters battle, a bipod enhances the performance and versatility of your rifle.

If you need a good bipod that will complement most rifles very well, pick up the CCOP Tactical Hunting Rifle Bipod. It’s light enough, durable, and features a precise adjustment system that makes it adaptable to almost any shooting position.

Now that you’ve got a good lay of the land, get yourself a bipod and start getting hits at longer ranges with a rifle you already know and love. Might as well get a charging handle enhancement to boot!