The handguard on your AR-15 is more important than many shooters realize. Your handguard is more than a great spot to mount accessories and optics. It also affects the accuracy of your rifle.

AR-15 handguards of old made contact with the barrel, which changed the flex pattern of the barrel and reduced accuracy, albeit slightly.

Your handguard also protects your hand from the heat of the barrel during rapid fire. Which is obviously important.

So, using the best AR-15 handguard on your rifle is key to maximizing the performance and versatility of your rifle.

We’re going to cover all the best handguards. But, if you need to know the winner right away, the Bravo Company AR-15 BCM Gunfighter Handguard is the best handguard, overall. It covers all the important bases, features outstanding construction, and is reasonably priced.

Stick around if you want to browse the other options. 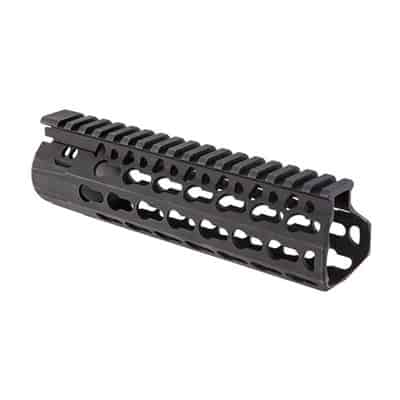 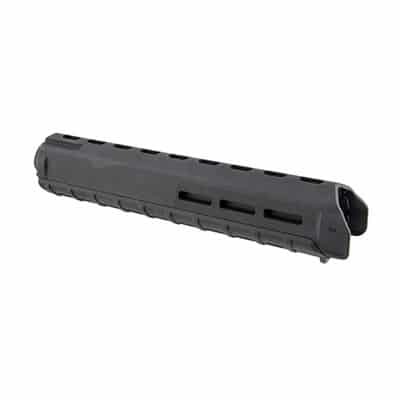 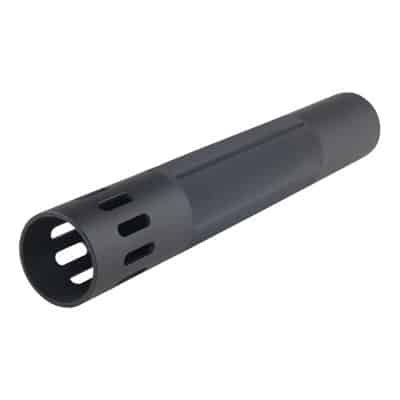 First review honors go to our winner. The rest of the handguards will be placed in order of price, from least expensive to most.

Bravo Company is one of the frontrunning AR-15 parts manufacturers. The Bravo Company AR-15 BCM Gunfighter Handguard is a handguard that just works. It’s simple, but does everything you need, even if it doesn’t excel in any one area.

First, this handguard is a free floating handguard. So, it won’t affect the accuracy of your rifle. This comes at no cost to the function of the handguard. You won’t even notice the difference between this and a traditional handguard.

There are KeyMod attachment points along the entire length of the handguard. Additionally, there’s a standard picatinny rail along the top for mounting optics.

If there’s one complaint about this handguard, it’s that it only comes with one KeyMod rail segment. So, you’ll need to purchase more rail segments if you have multiple rail-mounted accessories.

This handguard is constructed entirely from aluminum. It provides a very rigid platform, and resists heat.

The body flares out a bit and has a flat bottom which provides a good handhold and support for shooting from a barrier.

Overall, this is a solid, no frills Bravo Company handguard that’s a great fit for any type of AR-15 rifle.

Magpul is known for producing solid, (mostly) affordably priced parts. The Magpul  M-LOK Handguard is aimed squarely at the budget AR-15 builder. It does the job for an unbeatable price.

These handguards are designed to be straight over replacements for the classic M-16 two-piece handguards. Therefore, these are not free float handguards. So, there’s some impact on accuracy. But, if you’re replacing classic handguards, there’ll be no difference.

However, this handguard is an improvement over classic handguards in terms of construction and weight. Magpul built this model from high impact polymer, which is lighter and stronger than the high-density plastic of classic handguards.

Additionally, this is a one-piece design, which is more durable than the two-piece handguards.

There’s an integrated heat shield. So, these protect your hands during rapid fire.

There are M-LOK attachments points at the 12 o’clock, 10 o’clock, 2 o’clock, and 6 o’clock positions. You can mount accessories in all the most common positions. However, the mounting points aren’t as flexible as a handguard with attachment points on all sides.

The body is shaped to create a good platform for your forward handhold and allow room for overhanging attachments. Additionally, this handguard is wide enough to accommodate both direct impingement and gas piston actions.

Although this isn’t the best handguard available, it’s very capable and very affordable. It’s a great Magpul option for those who have a prebuilt rifle they want to upgrade and those who want to keep the cost of their build as low as possible.

The big benefit of this handguard is that it’s a direct replacement for your classic handguards, but it’s a free float handguard. So, it increases the organic accuracy of your rifle if you replace an A2 handguard.

The body is machined from a solid block of aluminum. It’s a very rigid handguard, with knurling for a secure forward handhold. Aluminum also provides good heat resistance for keeping your hand safe during rapid fire.

Additionally, the body is fluted to reduce weight. And there are notches cut at the muzzle end to improve air flow and cooling.

This Double Star handguard fits any standard upper receiver, and includes a barrel nut. The installation is fast and easy.

Unfortunately, the minimalism means no attachment points for accessories or optics. So, this is best for those who only want a receiver-mounted optic.

Overall, this is a great option for those who want a lighter, more streamlined handguard, but are satisfied with the performance of their A2 handguard. 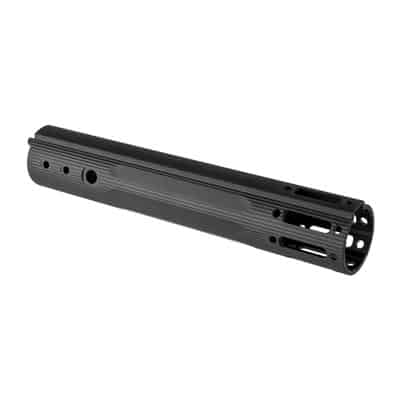 The ALG Defense AR-15 EMR V0X Ergonomic Modular Handguard is for those who like a narrow handguard for C-clamp or thumb-forward grip without sacrificing accessory mounting options.

First, this handguard is machined in the middle to create flat areas for your fingers and reduce the overall diameter of the body. This makes it easy to get your hand all the way around for a solid grip.

It’s also a free float handguard. So, you’ll get a boost to your rifle’s organic accuracy if you replace a classic handguard.

As for attachment points, there are M-LOK attachment points at the muzzle end to mount accessories. This is a good spot mounting just about anything besides a forend grip. This is by design, because the middle of this handguard is made to provide a space for a wraparound grip.

There are also two holes for quick detach sling mounts. These are handy if you like to attach the front end of your sling to the base of your handguard. They’re not in an ideal position for a three-point sling, though.

All in all, this is an excellent option for those who use a full grip without any forend grip attachment, but might want to use a mounted light or laser. 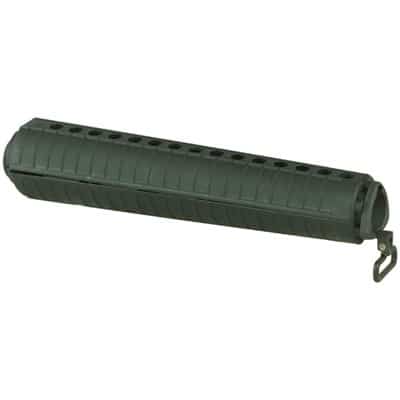 Not everybody wants a futuristic looking handguard with cool attachment points everywhere. Some like the look of the classic handguards. The Rock River Arms Free Float Barrel Sleeve is for those who want the classic look of A2 handguards with updated performance.

The biggest change from the original equipment is that this handguard is free floated. It’s better for accuracy, but looks the same as an A2 handguard.

There are integrated heat shields to keep things cool during rapid fire and an integrated sling swivel at the muzzle end for classic canvas slings.

Unfortunately, classic A2 handguard looks mean no modern attachment points. Also, the sling mount is fixed. So, your sling will need to twist when you move, since the sling swivel won’t turn.

The biggest struggle with this Rock River Arms handguard is that it’s a bit pricey. They don’t add a ton of performance. But, they cost as much as some modern handguards.

In the end, these handguards are simple and prioritize retaining the look of the original M-16 A2. But, they only introduce a marginal performance increase. So, they’re best for those who want a classic look.

Check on STNGR
Other Options

There are very few—if any—handguards that deliver more quality and performance for the money than STNGR handguards. That’s why the STNGR HWK is such an awesome handguard (and an awesome deal).

One thing that’s sorely missing from many handguards is some styling on the front end. For whatever reason, most manufacturers just cut the front of the handguard flat and call it good.

This handguard has a really cool cutout on the front end. It looks cool. But it also enables you to use a barrel length that leaves your muzzle device recessed into the handguard for a more flush front end, without blowing your handguard apart.

However, it might be wise to use a hand stop or a foregrip as an indexing point. Because you don’t want to put your hand around the very end of the handguard if your muzzle brake is recessed into the end of your handguard.

Aside from the styled front end, this handguard has all the durability and design features that you want.

The body is machined from 6061-T6 aluminum. And there are M-LOK slots at the 3, 6, and 9 o’clock positions. And there’s a picatinny rail along the entire spine of the handguard.

There’s also a picatinny rail section at the 6 o’clock position on the muzzle end, which is handy for mounting bipods or other accessories that require a more robust mounting system.

Lastly, there are QD sling sockets machined into the handguard at the base and at the muzzle end. And the QD sling socket at the base is nice and close to the upper receiver, for those who like to put their support hand in front of their sling point.

Overall, this STNGR handguard is super solid. It gives you the sort of quality that you’d usually have to pay a notably higher price to get. That’s why this is the best handguard for money, right now. 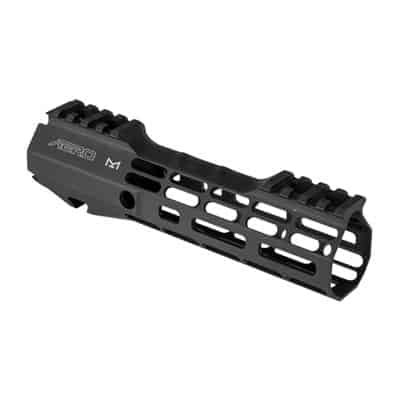 Many minimal handguards do away with the top-mount picatinny rail. The Aero Precision AR-15 Atlas S-One Handguard meets the requirements of a minimalist handguard, without sacrificing any of the mounting versatility that comes with fully railed handguards.

As you’d expect, this handguard is a free float design to keep pressure off your barrel. It’s machined from 6061-T6 aluminum to provide a rigid platform for accessories and a sling.

Aero Precision also added indexing grooves in the 12 o’clock position for a more positive grip and control over your point of aim. This is ideal for anyone who uses a C-clamp or thumb forward grip.

As for attachments, the entire body is covered in Aero Taper Lock Attachment System (ATLAS). And there are picatinny rail sections at both ends of the handguard.

So, you can attach accessories and optics almost anywhere on the rail. But, the middle, where you put your forward hand, is nice and narrow.

There are also holes for quick detach sling swivels near the receiver end of the handguard. It’s good for two-point slings. Not great for three-point slings.

Despite the slightly limited sling mount position, this Aero Precision handguard is still the best option for those who want ample attachment space, with the feel of a slimline handguard.

There a cooling slots in the body, to keep good airflow around your barrel. However, these slots are not accessory attachment points. However, you can get the hardware from Lancer Systems for adding rail segments to this handguard. So, you’re not out of luck for accessories.

But, there are no built in mounts for sling swivels. You’ll have to add a rail section for it.

Even though this isn’t a great handguard for accessorizing, it’s an excellent option if you’re going for a lightweight build, with an eye for minimalism.

There are definitely lots of furniture kits options in the market to accessorize your firearms to get your dream build.

Your handguard is one of the most important parts of your rifle, when it comes to creating an ergonomic platform that matches your shooting context and style. Believe it or not, the handguard you choose can make or break your AR-15.

If you want a handguard that you’ll like, no matter what you use your rifle for, choose the Bravo  Company AR-15 BCM Gunfighter Handguard. It’s capable of performing admirably in any context.

Now that you know which handguards will give you the best place for your support hand and cool accessories, upgrade your forend, then get out and run your gun.