The Best AR-15 Lower Parts Kit to Complete Your Rifle

Building your own AR-15 from parts is super cool. And, you can get a really sweet rifle at a really good price.

One thing that tends to get overshadowed during construction is the lower parts kit. The kit is mostly just buttons, levers, and pins. And, a lot of builders figure that as long as the parts are metal, they should be good to go.

However, this isn’t always the case. When one of your pins backs out while you’re shooting or your safety selector breaks, you’ll wish you’d invested a little more time and money in getting a quality lower parts kit for your rifle.

The Top AR-15 Lower Parts Kits You Should Buy 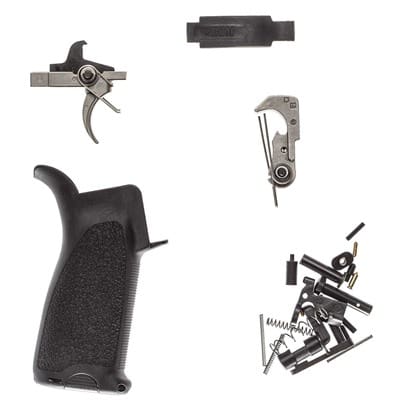 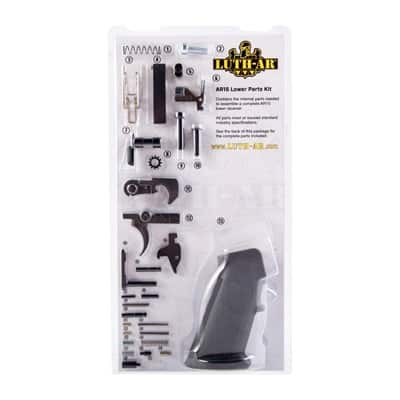 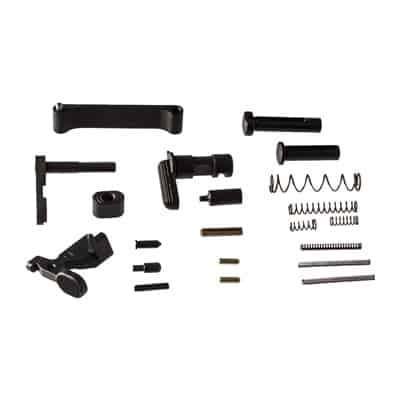 SPOILER: if you’re dedicated to just getting the parts and being done with it, get the Bravo Company AR-15 BCMGunfighter Enhanced Lower Parts Kit. It’s probably the best value in any lower parts kit, dollar for dollar.

For those who are interested in browsing the other options, stick around and we’ll show you what’s out there.

Our winner gets the honors of the top spot. All the other kits will be offered up in order of price, from most reasonable to most ridiculously priced.

Let’s piece this together.

The big bonus of this kit is that it includes a pistol grip and trigger. Even though you might not have a stock, this kit has all the parts you need to build a complete weapon, as far as the ATF is concerned.

And, the pistol grip and trigger aren’t flimsy freebie parts. They’re legitimate Bravo Company hardware. Given the price, that alone makes this kit a good value.

All the other parts are machined or forged to exceed mil-spec standards, and are subject to Bravo Company’s rigorous quality control process. So, you know your parts will fit your lower right out of the box.

The only thing that’s technically not mil-spec is the trigger guard. That’s because it’s better than mil-spec. It’s a curved trigger guard that gives you better access to your trigger.

The safety selector is also remarkably positive. It’s not so stiff that you have to work to flip it. But, the engagement is tight and crisp. So, you won’t accidentally engage or disengage your safety.

Since this is a mil-spec kit, there’s no ambidextrous controls. So, standard lower receivers only!

All in all, this kit is an excellent value for the money. You could easily drop this kit into your lower receiver and never buy replacement lower parts again.

Obviously, the main selling point of this kit is the price. It doesn’t get much lower.

However, Luth-AR constructs their parts with an eye for fit. So, even though this is a super affordable kit, the parts fit well without any fitment. In fact, some say that Luth-AR errs on the side of easier assembly, rather than tighter finish fit.

There are only two real complaints about this lower parts kit: the trigger guard and the safety selector.

First, there is no trigger guard. Most people put some sort of enhanced trigger guard on their rifles these days. But, it’s still a handy thing to have in the kit.

You won’t engage or disengage it accidentally. But, when you flip the safety throw, it does creep a bit before it clicks over.

Some shooters don’t care about that. But, if you’re a die hard for a really crisp safety selector, this one might irritate you.

It might not be perfect. But, this Luth-AR kit is the way to go if you’re doing a budget build, and want to save a few bucks here and there without compromising function.

Now, part of the reason the price is so good is because there’s no included trigger or pistol grip. So, remember to factor those costs in.

However, the parts are incredibly high quality in terms of machining and forging. The parts will last once you get them installed. However, you may need to do some sanding or filing to get some of the pins into place.

The safety selector has a nice positive throw, that’s difficult to actuate unintentionally. However, it’s not reversible like many mil-spec safety selectors.Overall, this Geissele kit works nicely for its intended function: it’s a simple, no-frills lower parts kit that works.

At my range, we’ve had some struggles with certain high-end AR-15s. Every time, we throw a CMMG bolt carrier and bolt in the gun, and it runs flawlessly. Based on the quality of their bolt carriers, the CMMG AR-15 Lower Parts Kit is a great deal, even if it’s not the cheapest kit out there.

This kit is a great option for anyone who’s building a mil-spec rifle, and wants both mil-spec construction and aesthetic. It comes with a mil-spec A2 pistol grip, trigger guard, and trigger.

Now, this is both a benefit and a warning.

A2 pistol grips aren’t that comfortable, and the grip angle makes for awkward trigger finger placement.

The trigger guard makes it tough to access the trigger with gloves on.

The trigger itself is, well, mil-spec. CMMG states that the trigger press is 6 to 6.5 pounds. But, mil-spec triggers often pull heavier than specified.

But, all the parts fit really well. You’ll be able to put your lower together without sanding or filing.

Also, CMMG actually exceeded the mil-spec standards for the hard coat anodization. So, the finish is actually a bit thicker than ordinary mil-spec. But, it still looks the same.

Additionally, the safety selector is more positive than most mil-spec safety selectors. There’s no real creep or mush before the selector clicks into position.So, if you want mil-spec hardware, this is a great option. It looks like mil-spec equipment. But, it’s just a tad better in terms of performance.

If Anderson Manufacturing is the Honda of the AR-15 world, DPMS is probably the Hyundai. DPMS makes affordable parts that work. The DPMS Lower Receiver Essentials Kit is pretty much a budget lower receiver parts kit. But, it comes with all the parts you need to actually complete your lower receiver.

That means that it includes a pistol grip, trigger, and buttstock, in addition to all the pins, buttons, and latches you need.

Now, the pistol grip is an A2 pistol grip. The buttstock and buffer tube assembly are M4 mil-spec parts. And, the trigger is a mil-spec piece that probably has an 8 pound pull.

However, the fit is solid. You won’t have to sand or file the parts to get them installed.

And, you’ll have a complete lower receiver when you’re done. All you have to do is mount the upper receiver, and you’re ready to shoot. So, this kit is a good value.

So, there’s not a lot of flair here. But, it’s a great one-stop-shop for finishing your lower receiver.

This kit also comes with everything you need to finish your rifle and get shooting. However, the Brownells MOE Lower Parts Kit comes with better components than a standard mil-spec kit.

First, the pistol grip and buttstock are Magpul MOE hardware. Magpul MOE hardware is a good blend of comfort, functionality, and affordability. So, you can build a complete lower receiver with this kit, and it will be more comfortable than a bone-stock mil-spec lower.

Brownells also includes an A2 pistol grip with this kit, just in case you want to be less comfortable.

The trigger is an Brownells, which is a nice upgrade over a standard mil-spec trigger. The trigger uses the mil-spec design to maintain reliability. But, the parts are nickel-boron and teflon coated to smooth out the trigger press. And, the pull weight is a true 6 pounds.

Unfortunately, the included trigger guard is a straight mil-spec trigger guard. That’s a minor complaint, though.

All the pins and parts fit great, and install without any fuss.

So, even though the price is a bit on the high side, it’s actually worth it considering that you get a complete lower receiver, with upgraded parts.

Your lower receiver parts kit is often the last stop on your way a completed rifle. So, the sooner you get one, the sooner you can sit down and finish your build that’s been waiting patiently to be finished.

Now if you are into customizing rifles, you may want to read our review on AR-15 9mm conversion kits just so you'll get an idea on more great modified builds.

If you just want a good lower parts kit without having to think about it, get the Bravo Company AR-15 BCMGunfighter Enhanced Lower Parts Kit. It’s a solid kit, that includes a trigger and pistol grip, and it’s reasonably priced. It’ll help you cover that last mile fast.

There are a lot of great lower parts kits out there. Don’t let a few buttons, latches, and springs keep you from finishing your build. Get yourself a kit, so you can go shoot your new rifle.