Also, if you’re building your own AR-15, you might as well use some upgraded parts. Because getting a better-than-mil-spec rifle is what building an AR-15 is all about. So don’t skimp on those small parts that can make a big difference. 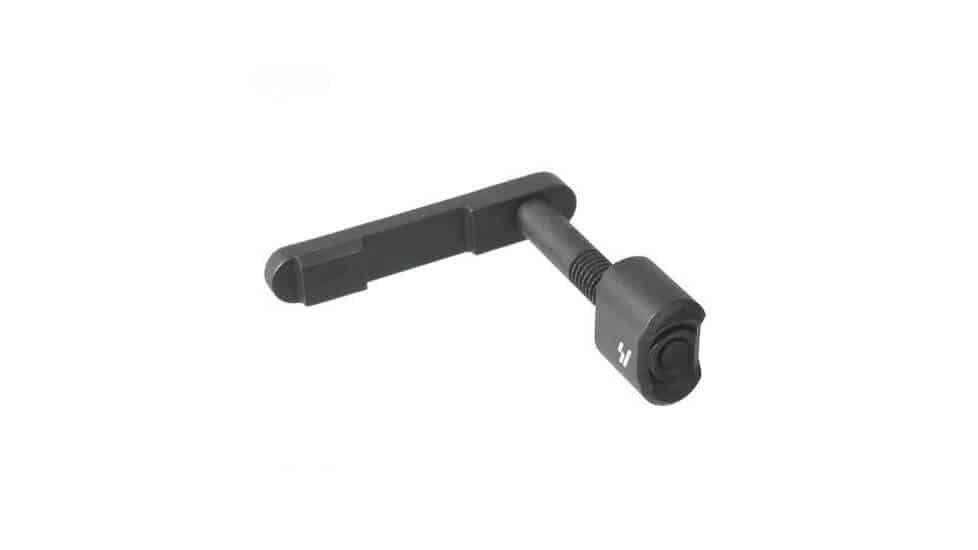 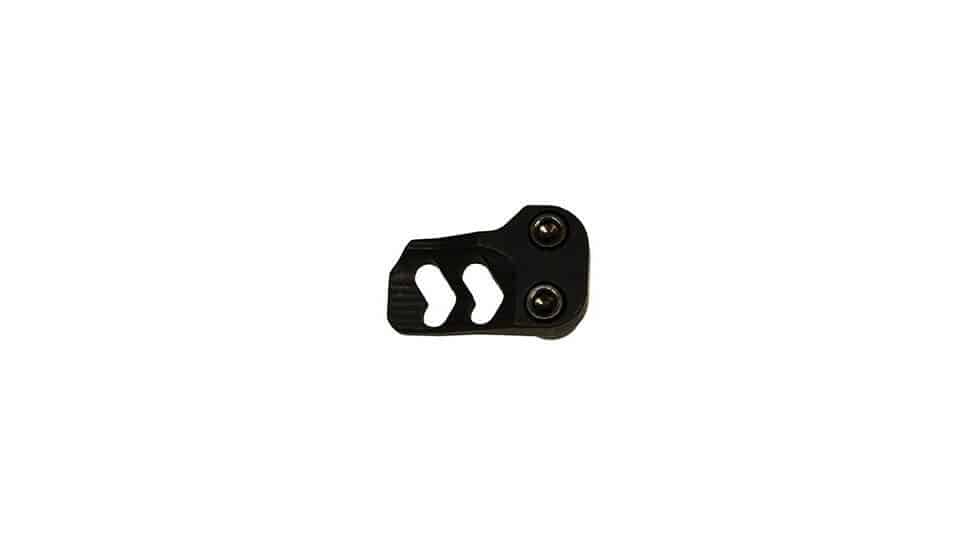 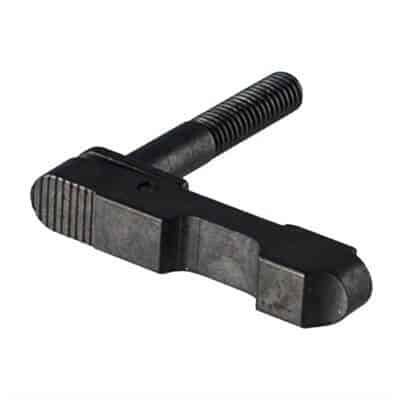 If you need something a bit more specialized, or you enjoy reading reviews about AR-15 parts (which we hope you do), you’ve hit the jackpot. We’ve got a whole bunch of the best AR-15 magazine releases lined up for you.

The least expensive magazine releases are up first.

The most expensive magazine releases are near the bottom of the list.

You know what to do.

Strike Industries is a relative newcomer in the AR-15 parts market. And, so far, I’ve been impressed with their stuff. Most of their parts are really well priced. And they also work very well. The Strike Industries Strike Magazine Catch is no exception.

Also, it’s got a slightly more aggressive aesthetic than a mil-spec magazine release that goes especially well with some of the more angular AR-15 lower receivers, like the Aero Precision M4E1 lowers. But it also looks great on a standard lower receiver.

It’s not an extended magazine release or anything. But it’s got a great fit and finish. And it’s quite affordable. So it’s a great option for anyone who wants to upgrade their lower receiver without adding any crazy bells or whistles.

The Odin Works AR-15 Gen II Extended Magazine Release is a very affordable magazine release upgrade that makes it faster and easier to drop your empty magazine during bolt-lock or tactical reloads.

This is just a magazine release button that attaches to your stock magazine catch. That’s good and bad.

But, this will give your magazine release button a much larger surface area for faster and more reliable magazine removal under stress.

Also, it works with other aftermarket parts like the Magpul BAD Lever. So it won’t get in the way of other upgrades or customizations.

Also, this Odin Works magazine release comes in a whole bunch of different colors, which is great for custom builds with a color scheme.

It’s just a magazine release button. But, if you don’t need ambidextrous operation, that’s all you need. So this is a very cost efficient option since you don’t pay for what you don’t need.

It’s shaped just like the mil-spec magazine catch. But it extends out a bit further and adds a small hinge that pulls the magazine catch out when you press it from the left side.

Unfortunately it’s just the magazine catch side. You’ll need a magazine release button to go with it. But that’s not a problem if you’re replacing a mil-spec magazine catch.

Every infantryman knows that every ounce counts. That’s especially true if you’re building a lightweight AR-15. And the V Seven Weapon Systems AR-15 Ultra-Light Magazine Catch is an excellent solution for those who are counting ounces.

It does have slightly more aggressive texturing on the release button. So you get more tactile feedback when you hit your magazine release. But that’s really the only functional upgrade you get.

But it’s covered by a lifetime warranty. And it has the same hard coat anodizing as a mil-spec magazine release. So V Seven Weapon Systems is confident that you won’t have durability issues.

It’s nothing special in terms of function. But, if you’re trying to save weight, this is the magazine release to get.

This is a complete magazine release, with the catch and the button. The button is extended to make it easier and faster to drop your empty magazine when you need to reload.

And the button sits slightly closer to the receiver. That way it’s less likely that your magazine release will get pressed unintentionally.

However, the thing that makes this modular is that you can remove the extended paddle and replace it with other Battle Arms Development buttons. It gives you a bit of customization without having to remove your magazine release every time.

Also, this Battle Arms magazine release is cast from carbon steel that’s lighter and stronger than a standard mil-spec magazine release. So it’s an all-around upgrade over stock equipment.

This might be the most expensive extended magazine release that’s not ambidextrous. But it’s better in every aspect than a mil-spec magazine release. So the extra cost is worth it.

The Strike Industries AR-15 Ambi Magazine Release is ambidextrous. And it looks cool. As everyone knows, looking cool is half the battle. So this magazine release does 50% of the winning for you.

I find that many ambidextrous magazine releases add a lot of bulky levers to the side of your rifle. This one is very simple and streamlined. It’s just a single, serrated paddle that you can press from the left side of the gun.

It’s very functional and easy to use, without any clunky levers.

All in all, this Strike Industries magazine release looks cool. It works. And it won’t get in the way when you don’t need it. That’s about all you can ask from an ambidextrous magazine release.

This kit locks your magazine into the magazine well. So you’ll have to break your rifle open to load it. However, it enables you to add other things to your rifle without violating California laws.

Also, it looks almost exactly like a standard magazine release. It doesn’t disturb the aesthetics of your rifle, which is nice.

However, it also comes with an extended rear takedown pin knob. That way you can split your rifle open more easily for faster reloading, even with a fixed magazine.

Overall, this is not a good solution if your state doesn’t require it. But, for California and some other states, this Juggernaut Tactical accessory is a good solution for those who want to run other standard features like a pistol grip and adjustable stock.

It’s essentially a standard magazine catch with an extended lever on the left side. It gives you a really large release button on the left side, which makes for fast left-handed reloads.

However, the button on the right side is also a bit larger than a standard release. So you get more reliable ejection of empty magazines during right-handed reloads, as well. However, it’s not quite as large as the left side release.

Unfortunately, like most Knight’s Armament stuff, this magazine release is pretty pricey. But it’s super high quality gear. So it deserves the price tag.

Let the Mags Hit the Floor

Bottom line: there’s a magazine release for everyone. Like there's always a reliable ammo.

Now that you know, it’s time to get a new AR-15 magazine release and bump up those slow reloads.