The Best AR 15 Magazine for Feeding Your Rifle

Even though AR-15 magazines are detachable, they’re still part of the weapon system. Bad magazines cause reliability issues. So, it’s important that you get decent magazines.

But, you don’t have to get the most expensive magazines out there. You just need magazines that are well-built, durable, and friendly to your budget.

Your magazines are going to get beat up a lot, and you want to have plenty of them so that you can shoot more and spend less time refilling magazines. That means your magazine of choice should have a good blend of quality and affordability.

SPOILER: If you don’t want to spend much time debating which magazine to get, just grab the Magpul AR-15 30 Round PMAG Gen M3. It’s a tough magazine that comes in around $20.

If you want to weigh your options more carefully, read on. We’ll cover all the frontrunning AR-15 magazines on the market, so you can choose the magazines you like best. 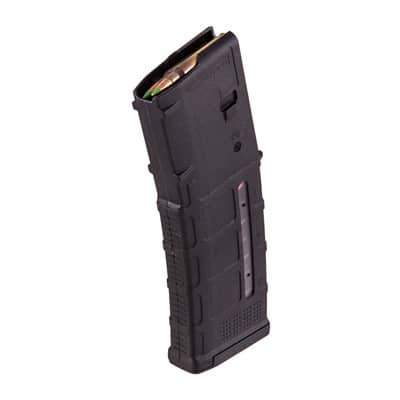 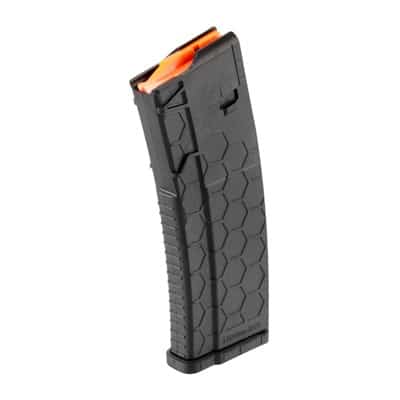 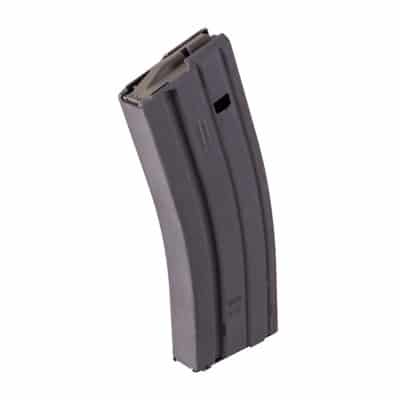 The Best AR 15 Magazine Reviews: Putting the Most Bullets in Your Gun

As usual, our winning magazine is up first. All the other options will get their time in the spotlight in order of price, from the bargain basement up to the top shelf goods.

Time to load up.

The Magpul AR-15 30 Round PMAG Gen M3 has been a staple for AR-15 shooters for decades. The PMAG is so popular that some manufacturers include PMAGs with their rifles.

Polymer retains its reliability better than metal after repeated drops that can cause metal magazines to deform over time. The polymer construction also solves the problem of warped feeder pawls that have plagued metal USGI magazines since they were invented.

So, this magazine is more durable and delivers a longer service life than almost any competing metal magazine. And, it’s actually lighter than some metal magazines, too.

There’s also reinforcement around the magazine catch and feed lips to make this magazine more rigid. Inside the magazine, there’s a four-way anti-tilt follower to help rounds feed more smoothly. These features help improve reliability with all types of ammunition

Additionally, this magazine is equipped with a viewing window that enables you to see how many rounds you have left in your magazine for better tactical reload timing and on-the-fly adjustments. You can also get the PMAG without the viewing window for a few dollars less.

If you want more rounds in your magazine, check out the 40 round PMAG Gen M3 Magazine. It’s the same as the 30 round PMAG, but with more capacity. It’s an excellent option for competition shooters who need a lot of rounds to get through stages without reloading.

The only issue with the PMAG is that the overtravel stop doesn’t fit some lower receivers. This magazine fits most standard lower receivers. But, you may want to check and make sure this mag will fit your rifle before you buy.

Even with that minor hiccup, this magazine is still one of the best blends of durability and price on the market. It’s an excellent magazine for any context.

The Hexmag AR-15 Series 2 30 Round Magazine might be the most affordable polymer magazine on the market. This magazine is incredibly well-priced, and delivers solid reliability and durability, for the most part.

There’s a lead in ramp above the catch pocket for smoother magazine insertion, and stripper clip guide for easier refilling.

Inside the magazine, there’s an anti-tilt follower for smoother feeding.

The polymer is very thin, to save weight. This makes the magazine body less rigid than the beefier polymer magazines. However, it doesn’t seem to cause any reliability issues.

The only trouble with this magazine is the quality control. Most people get SENTRY Hexmags that function perfectly. But, some buyers have received magazines that had reliability issues. So, make sure you function check this magazine before you use it for anything serious.

However, even with this imperfection, the price still makes these magazines an incredibly attractive option for the budget-minded shooter and those who want a huge stockpile of magazines for training.

Stock magazines could pose some problems in the future that's why this is the most commonly AR-15 upgraded component on the rifles.

If you’re the type who wants a metal USGI magazine, the Brownells AR-15 Magazine 5.56mm is for you.

Brownells improved on the original USGI design by using a welded aluminum body for better durability and reliability. The follower is upgraded with a Magpul anti-tilt follower for smoother feeding than standard USGI magazines.

The exterior is covered with a hardcoat anodized finish to add corrosion resistance. The finish also reduces friction so your magazines reliably drop free during speed reloads.

All these factors add up to produce a metal magazine that performs just as well as most polymer magazines. Unfortunately, it’s still metal. So, it’s heavier than a polymer magazine. But, not by much.

And, even though it’s tougher than the standard USGI magazines, metal construction is more prone to warping than polymer magazines. This magazine will last for a very long time. But, check your feed lips periodically.

But, if you’re the type who prefers to run metal magazines, or if you just want a low cost alternative to high-end polymer magazines, this is probably the magazine for you. 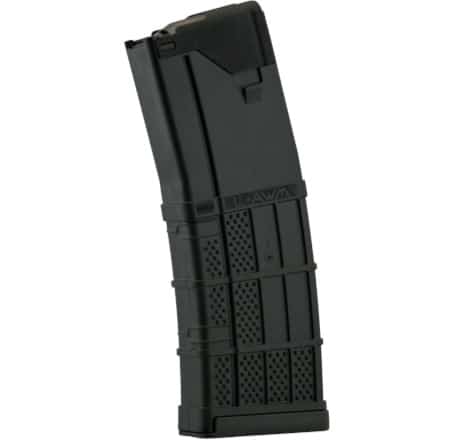 The Lancer Systems AR-15 30 Round L5AWM Magazine is a hybrid magazine in terms of both construction materials and price. It gives you the best qualities of metal and polymer, and it lands somewhere between USGI mags and high-end polymer magazines on the price spectrum.

First, the majority of this magazine is polymer. However, there’s a hardened steel sleeve at the top which promotes smoother feeding. And, the hardened steel feed lips are less prone to warping, because they’re supported by polymer.

So, this magazine is lighter and more impact resistant than a traditional metal magazine. But, it’s got metal where it matters.

These magazines also come in a variety of colors:

The translucent colors offer the benefit of being able to see how many rounds you have left in the magazine. And, it’s easier to see the rounds in a translucent magazine than it is in a traditional windowed magazine.

Some shooters have found that these Lancer Systems magazines can be difficult to seat completely when loading with a closed bolt. So, you should check the function before you run these magazines in your competition, tactical, or defensive rifle. But, open-bolt reloads are no problem, and the magazines seat fine with a good slap, even with the bolt closed. 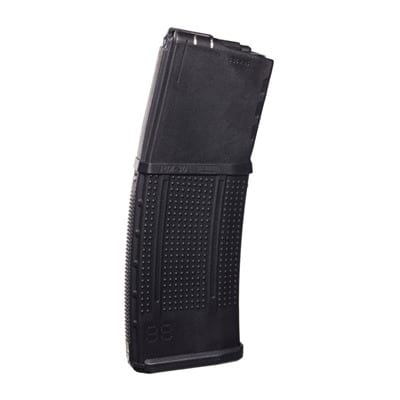 Pro Mag took a page out of the Glock handbook, and produced the Pro Mag AR-15 Roller Follower Steel Lined Magazine. It combines steel and polymer to produce the most reliable and durable AR-15 magazines on the market.

This magazine is essentially a polymer magazine wrapped around a steel sleeve. This produces an extremely tough and rigid body, with steel feed lips for smoother feeding. However, since the steel is supported by the polymer, it’s much more resistant to warping.

Pro Mag also utilized the steel lining on the magazine catch for a positive catch and minimal wobble when you seat the magazine.

The “roller follower” is a polymer anti-tilt follower with a roller on the front edge which reduces feeding friction. This improves reliability.

However, it adds a moving part to the magazine that needs to be kept clean to function properly. So, these magazines require more maintenance than most.

The outside of the body is stippled more than most polymer magazines. This provides a solid grip for ripping magazines out of tight pouches or malfunction clearance.

This Pro Mag magazine might not be the best for shooting in super dirty conditions. But, the performance and reliability in cleaner environments makes this magazine an excellent option for competition and tactical shooters.

If you haven’t started stockpiling magazines, you definitely should. It’s not even about prepping for the apocalypse. It’s just easier to train, compete, and shoot for fun if you don’t have to fill up your magazine every five minutes.

Carrying an spare mag does give you more edge rather than filling everytime it runs out.

If you want some solid magazines that will last as long as you have them, and aren’t too hard on your wallet, get the Magpul AR-15 30 Round PMAG Gen M3. It’s a great magazine that’s been proven time and time again.

Now that you’re savvy on the options, stock up on magazines, that way you can shoot more without taking so many magazine-filling breaks.

You can also check these great articles: