An AR-15 short-barreled rifle (SBR) is a sweet gun.

They’re handy little tools that can be used in a lot of shooting contexts.

If you’re pressed for time, just read this:

Spoiler: if you’re on the market for an AR-15 pistol, but short on time, here’s the punchline: the Springfield Armory Saint Pistol is our recommended model.

There are also some challenges involved with getting a true SBR. The ATF has special regulations for any rifle with a barrel shorter than 16 inches or that is less than 26 inches in overall length.

So getting an SBR isn’t quite as simple as getting a full length rifle.

However, the ATF has no such restrictions for pistols.

That’s why we have these firearms.

An AR-15 pistol is essentially an AR-15 without a stock. Without the stock, the gun becomes a pistol, legally speaking.

The recoil of an it is manageable enough that the gun is almost perfectly usable without the stock.

But, there’s a remedy for this, too:

Arm braces were originally created to help amputees shoot rifles one handed. But they are shaped in such a way that it makes them handy for use as an improvised stock.

With an arm brace, an this gun can be pressed into use for just about anything you’d use a rifle for.

Of course, this brings up a logical question:

If you’re going to use an AR-15 pistol like a rifle, why not just get a rifle?

That goes back to the ATF regulations.

There are three main reasons to use one:

1. You can get an AR-15 SBR without paying for the tax stamp.

In some states SBRs are entirely illegal. But even in many of these states, you can get an AR-15 pistol with a short barrel.

They are a great way to get legal access to configurations that might be otherwise too costly or illegal.

As always, check your local laws to make sure that these pistols are legal in your area before you buy or build one.

An SBR tax stamp is only good for the state you live in.

So, even if you have an SBR tax stamp, taking your SBR to states where it’s illegal is still illegal.

But, if you have an AR-15 pistol, you can take your it to states where SBRs are illegal without much of a fuss.

This is handy for competition shooters or instructors who travel with their guns to out of state competitions or classes they’ve been invited to teach.

Now, there are some states where your firearm is illegal no matter what. So be smart about it, and do your research.

In any case, an this gun gives you more transport flexibility than an SBR, even with a tax stamp.

3. A short barrel is an excellent CQB or vehicle carry gun.

There’s a legitimate discussion about whether or not you need a CQB or vehicle carry gun. I won’t get into that.

What I will say is that an SBR is the most capable type of rifle for operating in tight quarters. It’s very common for military units to use SBRs in their loadout for urban operations where they know they’ll be operating inside houses a lot.

In fact, the only real benefit of a shorter barrel is that it makes the rifle more manageable when you have limited workspace.

But for CQB situations, these things aren’t huge factors. Shooting distances are short and maneuverability is a priority.

So, if you want or need a CQB or vehicle gun, an SBR is the way to go.

And, since SBRs are so tough to get, a short-barreled AR-15 pistol is the next best thing.

Even though an it is technically a pistol, you’ll still need the same kit as you’d use for a rifle if you plan to make it a CQB platform. Your CQB firearm should have:

The sling is to ensure weapon retention. The light is for target identification.

In the civilian context, extra magazines and other tactical gear are optional.

An added benefit of a short-barreled AR-15 pistol is storage space.

You can store or stage a short-barreled firearm in more places than you can fit a full-length rifle. So the shorter platform gives you flexibility for things like staging your gun for home defense.

Since a short-barreled AR-15 pistol is such a handy tool, that leaves just one question...

Build your own or buy pre-built?

There are benefits on both sides of this coin. So I’ll briefly outline some considerations of each method and you can decide for yourself which you like best:

If you decide to go with a pre-built , you’ll obviously want to get the best one.

To help you decide which is best for you, here are the top models of 2018. 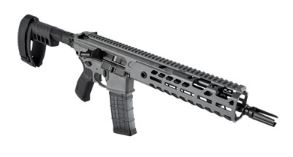 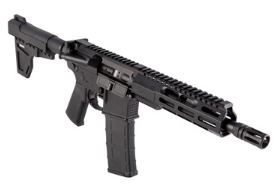 Here’s the juice. These are sorted from highest to lowest price.

Sig Sauer has long been a staple in the firearms industry.

Sig has an exceptional reputation for their pistols. Some of them have taken on legendary status. Sig has brought their pistol building expertise to the AR-15 pistol market with the Sig Sauer MCX Virtus Pistol.

They started with their proprietary SB15 stabilizing brace to ensure that you can use the MCX in any context where a rifle might be ideal. This gives you a solid foundation for sighted fire, using any sights or optic you put on the MCX.

To complement the superb brace, the MCX also features Sig’s Matchlite trigger that provides a supremely smooth trigger pull and a clean break for exceptional accuracy in any shooting context.

The MCX utilizes Sig’s gas-actuated operating system that enables Sig to pack a rifle caliber into a more compact platform. The MCX also has an internal recoil system to reduce felt recoil and improve accuracy for multiple shot engagements.

Sig equipped the MCX with a free float handguard that features MLOK attachment points. MLOK has largely replaced the old picatinny rail system. The MLOK handguard enables you to attach any accessory securely and with less rail space.

The MCX comes at a characteristically high price point. This is fairly normal for Sig guns. But, the price tag gets you the ultimate model on the market right now.

Daniel Defense makes some of the best AR-15 rifles on the planet.

They’ve brought that quality and rifle-building expertise to the AR-15 pistol game with the Daniel Defense DDM4 MK18 Carbine Pistol.

The DDM4 is built with the rifle enthusiast in mind. It’s a fairly basic platform that lends itself well to customization. At the same time, it’s also built to USSOCOM specifications, with systems that have been rigorously tested by military units.

This starts with the size. The DDM4 features a 10.3 inch cold hammer forged barrel. This means the platform is an ideal length for a CQB or vehicle gun.

Daniel Defense created their Bolt-Up operating system to improve reliability, which has been validated by U.S. military units. This means it will always work when you squeeze the trigger.

The DDM4 includes the Daniel Defense pistol grip with an integral trigger guard and soft touch overmolding. This gives an exceptional grip angle and texture and provides a solid foundation for a steady trigger squeeze and sighting.

Overall, it’s one of the lightest and highest performing models on the market. This is why it easily takes the cake for the compact AR-15 pistol.

Bravo Company Manufacturing started in the early 2000’s and quickly established themselves as a premier AR-15 manufacturer.

The Bravo Company Manufacturing Recce-11 KMR-A Pistol is based on the same manufacturing principles that made their rifles so popular.

The Recce-11 is built from machined aluminum parts, both in the upper receiver and lower receiver. The exterior is totally hardcoat anodized. All this gives the Recce-11 exceptional durability and reliability. You’ll get thousands of rounds of use out of the Recce-11.

Bravo Company Manufacturing built the Recce-11 with a high quality barrel that uses their proprietary chrome lining on the bore and chamber. This gives the barrel exceptional performance and longevity.

Not only that, but the gas tube is removable so you can add whatever type of pistol brace works perfect for you.

Additionally, the Recce-11 is equipped with a carbine length gas system to ensure exceptional reliability. This also means that the Recce-11 can be easily converted into a rifle if you want that option.

The handguard is modular and features keymod attachment points for easy attachment of any accessories you want.

Although the Recce-11 is a rather plain vanilla model, it’s an excellent foundation for anyone who plans to make customizations or add upgrades to their firearm. This combines with the base price to make the Recce-11 the perfect option for the money.

ZEV Technologies is known for their high-performance pistol components. ZEV makes pistol parts that are upgrades for even the legendary Glock pistols.

So it makes sense that ZEV would produce an outstanding firearm. Their ZEV Technologies AR-15 Forged Pistol features all the same technology that makes their pistol parts so outstanding.

First, the entire exterior is coated with ZEV’s proprietary hard-coat anodized finish that is superior to the stock finish on most pistols. The internals have a smooth finish for enhanced reliability. This makes the ZEV AR pistol an exceptionally durable platform that will stand up to thousands of rounds.

To double down on reliability, ZEV included their H3 heavy buffer for even more durability and a smoother recoil profile. So the ZEV AR pistol will always fire when you need it to. And you’ll be able to keep your sights on target through multiple shots.

The KAK Shockwave stabilizing brace provides just as much comfort as a standard stock, and gives you more control for tactical shooting and movement.

Up front, the ZEV AR pistol has a low profile gas block and a Wedge Lock handguard so you have plenty of space for any sights, grips, or other attachments you need.

Overall the ZEV AR pistol is an exceptionally reliable and configurable platform. It’s a great option for a tactical competition gun or home defense gun for those who want to tinker with their weapon and create the best AR-15 pistol setup for their context.

Springfield Armory makes a broad range of firearms that all have one thing in common:

The Springfield Armory Saint Pistol is the least expensive AR-15 pistol in this article. However, Springfield partnered with Bravo Company Manufacturing to ensure that the Saint delivers exceptional quality at this price point.

Springfield contracted Bravo Company Manufacturing to produce the pistol grip and the trigger guard. This means the Saint offers superior ergonomics that are designed to help you line up and get better hits.

The nickel-boron coated single-stage trigger provides a smooth pull and a clean break. The Saint’s trigger minimizes muzzle movement during the trigger press for greater precision when you need to get hits in tight windows.

The Saint is built with a heavy tungsten buffer and internals finished with super-hard melonite to ensure superior reliability even with the pistol-length gas system.

Lastly, the Saint is equipped with a blast diverter that directs sound toward the target to help mitigate the muzzle blast effect of having such a short barrel.

The price point and overall length of the Saint make it an excellent option as a home defense gun. However, it can easily be used as a tactical competition gun for shooters who want a solid performer that fits their budget.

All in all, if you’re looking for a versatile platform that will perform well in defensive, tactical, and competitive contexts, one of these should be on your list.

If you need help choosing the right one, here’s our recommendation:

Get the Springfield Armory Saint Pistol. It’s a reliable platform that will leave plenty of room in your budget for additional gear and training.

Now that you know what the top options are, grab yourself an AR-15 pistol and get out for some trigger time!