AR-15 pistols can give you the maneuverability of an SBR (Short Barreled Rifle), without the expensive tax stamp.

That’s nice, but it doesn’t do you much good to save money on the tax stamp, only to spend all that money fixing your AR-15 pistol.

A short barreled rifle that’s not a rifle…

I’ve seen a whole bunch of AR-15 pistols as part of the rental fleet down at the range. I’ve wrenched on them in the gunsmithing shop. I’ve shot all sorts of AR pistols.

Using this experience, this article will answer the most common questions about AR pistols and show you which are the best AR-15 pistols.

By the time you finish reading, you’ll have all the information you need to identify the ideal AR-15 pistols for you.

…Then you can buy with confidence.

What are AR-15 pistols good for?

The main benefit of AR-15 pistols is getting a barrel shorter than 16 inches, without an SBR (Short Barreled Rifle) tax stamp. An AR pistol is technically not a rifle. Therefore, the SBR tax stamp requirement does not apply to AR-15 pistols.

Now, what is an AR-15 barrel shorter than 16 inches good for?

A shorter firearm is lighter and easier to handle than a firearm with a longer barrel. However, there are trade-offs…

Generally, a shorter barrel reduces the maximum effective range of a firearm.

Shorter barrels produce lower muzzle velocities. The shorter the barrel, the sooner the bullet slows down too much to be effective.

For instance, a 5.56mm bullet fired from a 16” barrel is still flying fast enough at 500 yards to achieve ideal terminal ballistics.

On the other hand, a 5.56mm bullet fired from a 10.5” barrel stops producing optimal terminal ballistics somewhere around 400 yards.

There’s also talk about the precision of shorter barrels…

However, there’s an almost negligible difference in precision between short and long barrels at typical AR-15 shooting distances.

Long story short, an AR-15 pistol enables you to get an AR-15 that’s lighter and easier to maneuver at the expense of a slightly shorter maximum effective range.

Are AR-15 pistols good for self-defense?

In general, the AR-15 platform is excellent for self-defense. However, home defense is the most likely context where an AR-15 would be used for defense. In that context, an AR-15 pistol can be even better for self-defense, since a shorter barrel makes the firearm easier to handle inside a building.

However, if you want a firearm that’s MORE manageable inside a house, an AR-15 pistol is the most economical way to get a compact AR-pattern firearm.

Generally, yes, 5.56mm is good in an AR pistol. Most AR-15 pistols have barrels shorter than 14.5 inches, which may not be ideal for getting optimal 5.56mm performance at maximum distances. However, a 5.56mm AR pistol is plenty effective at the most probable civilian shooting distances.

These are the AR-15 pistols that have held up best as rental guns and show up in the shop for repairs least often.

If you’re not sure about all the AR-15 specs and terms, get an AR-15 pistol with these specifications:

The Geissele Automatics LLC Super Duty Rifle is one of the best complete AR-15 rifles you can buy. It’s well-designed, has great ergonomics, and finely tuned. It’s one of my favorites.

All in all, the equipment that comes standard on this pistol is outstanding. It’s hard to beat Geissele.

However, this pistol is also more pleasant to shoot than a lot of other AR-15 rifles with short barrels. I’m not sure of the exact specs, but Geissele gasses their rifles very well.

So you get a pretty reasonable recoil impulse, especially considering the carbine gas system. Also, if you run a suppressor, you won’t get too much gas in your face.

Just be aware that this pistol is well-gassed for a carbine length gas system.

The gas system is still short. The recoil is still sharper than a mid-length or rifle-length gas system. Geissele has just done a great job of making the short gas system as pleasant as possible.All in all, this pistol is an outstanding platform if you want a short AR-15 that’s great for suppressed or unsuppressed operation.

The Daniel Defense MK18 is one of the most revered short-barreled AR-15 rifles on the planet. And the Daniel Defense DDM4 V7 Pistol brings all the reliability and toughness of the MK18 to  a pistol market.

We had a DDM4 on the rental range for years. And it shot literally hundreds of thousands of rounds before some bad ammunition finally took it out of service. Short story, Daniel Defense makes incredibly durable guns.

This pistol isn’t cheap. And the controls and ergonomics are basically just mil-spec. But you’ll get a ton of use out of this pistol.

Also, it shoots pretty softly for a gun with a short barrel and a short gas system. Supposedly, Daniel Defense follows the DoD specifications for rifles. And it works pretty well.

No, it’s not a super tuned competition gun. But the DDM4 pistol strikes a great balance between soft-recoil and reliability.

You may want to upgrade the trigger. And the included flash hider is similar to a standard A2 birdcage. But if you value longevity, the Daniel Defense DDM4 pistol is the way to go.

The most notable thing about this pistol is ergonomics.

The pistol grip is excellent — very similar to the B5 Systems Grip 23 (one of the best pistol grips ever).

In fact, I think the grip texture is actually better than the Grip 23 texture. Also, the Troy pistol grip has a storage compartment, which the Grip 23 doesn’t.

Sadly, the grip doesn’t have the thick beavertail, which I think is the best feature of the Grip 23. However, the grip angle is comfortable and reduces fatigue in long shooting sessions.

Additionally, the included muzzle brake does a pretty good job of reducing the felt-recoil. It’s loud, though. Double up on your hearing protection.

Lastly, this is one of the few pistols on the market that comes with sights. They’re Troy Folding Sights, which are some of the best you can get.

Overall, if you want the most complete AR-15 pistol, that’s ready to rock right out of the box, this is your best bet.

Check on Palmetto
Check on Guns.com

The PSA 10.5 Carbine-Length Pistol is a 10.5 inch pistol. They’ve done a cool thing with the handguard, though: the handguard is 12 inches.

The handguard gives you a lot of rail space. It’s more comfortable if you have long arms or like to get your support arm fully extended or near fully extended.

PSA uses a fluted blast can to protect your hand and directs the blast away from your face.

It makes this pistol pretty pleasant to shoot. You don’t feel the muzzle blast as much as you might with an open muzzle device.

Unfortunately, the flash can doesn’t offer any real recoil reduction or compensation. It just makes the muzzle blast more bearable for the shooter.

Additionally, you can’t really put a suppressor on this pistol, because the handguard isn’t wide enough to fit around most suppressors.

This pistol is really affordable, though. It’s nice to shoot.

If you’re not all that concerned about swapping muzzle devices or adding a suppressor, this is a decent rifle that won’t smash your wallet.

Check on OpticsPlanet
Check on Palmetto

The Springfield Armory Saint Victor has become one of my go-to recommendations if a customer just wants a good AR-15 pistol that’s not too expensive.

It comes with a polished nickel boron trigger, an M-LOK handguard, and a flash can. Also, it comes with a B5 Systems Grip 23, which you already know I love.

However, I should note that this pistol still packs a heck of a muzzle blast.

If you’re standing next to it, you’re going to feel that short barrel muzzle blast. Just something to be aware of, if you shoot on a range where you’ll have other people on the line next to you.

Weirdly, Springfield Armory doesn’t include any sights on this pistol, which I find to be a little disappointing, because the Saint rifle comes with sights. So why not put sights on the pistol?

That’s a small issue, though. If you want a straightforward pistol that’s well priced, I recommend the Saint pistol. 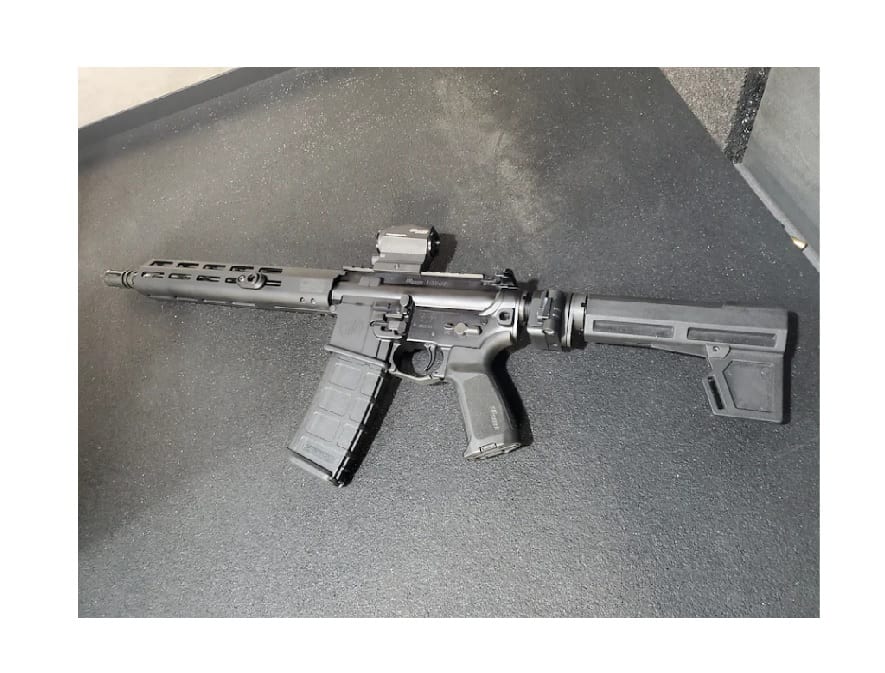 Check on Palmetto
Check on ImpactGuns

Sig has really established themselves in recent years as a top notch AR-15 manufacturer. The Sig Sauer M400 Tread Pistol is the smallest variant in the Sig M400 line.

The build quality and materials are outstanding. Sig’s manufacturing processes are some of the best in the industry.

I also appreciate that they went with an 11.5 inch barrel. It’s my favorite length for short barrels.

My only real complaint about this pistol is the pistol brace. I find the blade-style braces to be the least comfortable and most difficult to use.

However, you can change the brace out, if you want.

Everything else on this pistol — from the controls to the anodized finish — is outstanding. It’s totally worth getting this pistol and putting a different brace on it.

AR-15 pistols are cool platforms. It’s an affordable way to get a shorter gun without paying for the tax stamp. That may change in the future, with changes to the ATF pistol brace rules.

For now, though, an AR-15 pistol is the most cost-efficient way to get the shortest AR-15 possible.

If you get the Geissele Automatics LLC Super Duty Pistol or the Daniel Defense DDM4 V7 Pistol, you can be confident that you won’t have to pay for parts or repairs down the road, which ensures you’ve made a good investment.

So check them out. You won’t be disappointed.

Read our other related articles here: