Filling magazines is a fact of life in the shooting world. And it’s usually a slow, arduous process that hurts your thumbs.

But it doesn’t have to be that way.

Speed loaders take the pain out of filling your magazines. And, as the name suggests, a speed loader makes filling magazines far faster.

SPOILER—there are a lot of them out there. If you want one that will save your thumbs, save you time, and save you money, get the ProMag .223 Magazine Loader. It fills magazines fast and easy. And it’s easy on your wallet.

If you’d like something faster, easier, or both, read on. We’ve rounded up all the best AR-15 speedloaders. And we’ll help you get one that meets your needs and your budget. 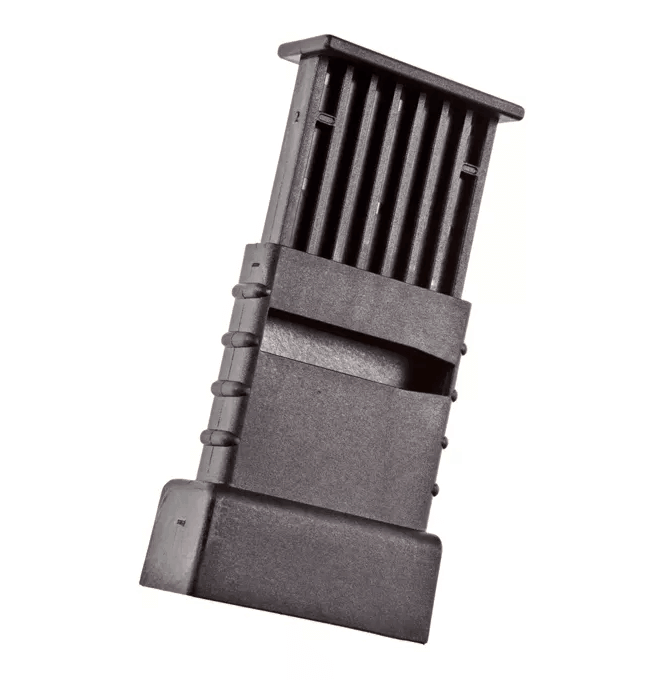 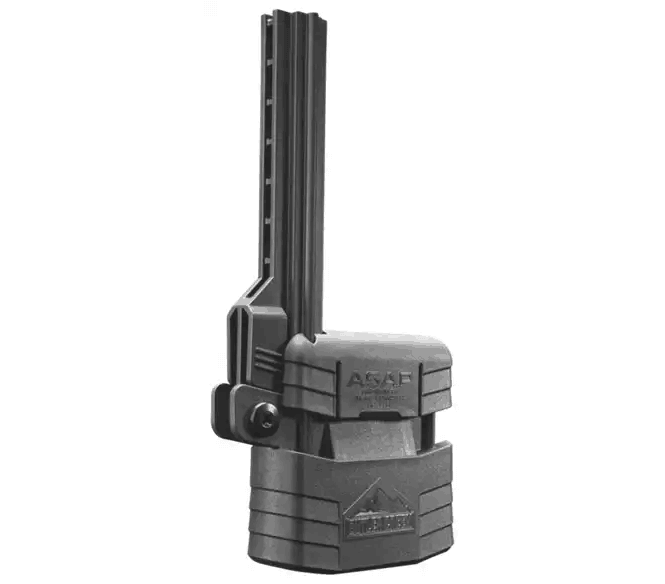 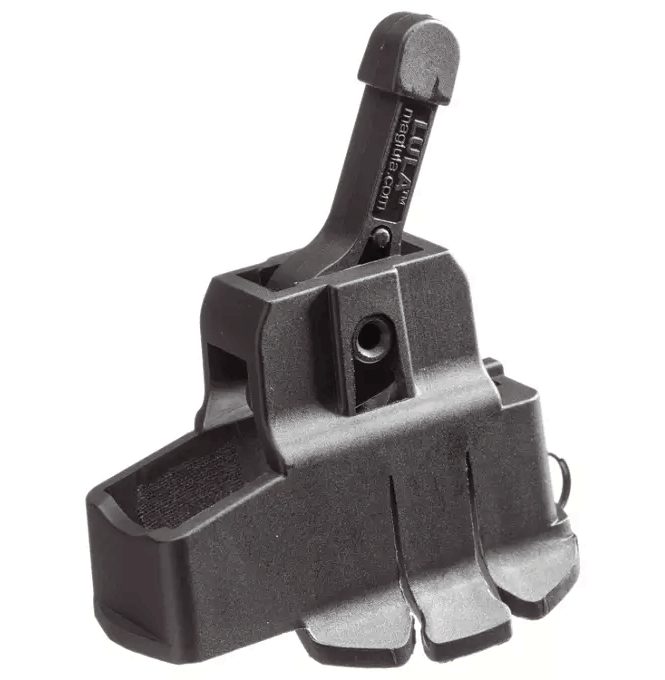 Our winning AR-15 speedloader is up first. The winners from each specific category will be presented in order of price.

The least expensive AR15 speed loaders are near the top.

The most expensive speed loaders are near the bottom.

The ProMag .223 Magazine Loader is a very simple and affordable AR-15 speedloader that delivers the most time and pain savings per dollar.

It’s cool because it loads 5 rounds at a time. Just drop the rounds into the barrel (facing the correct direction) and press the plunger down. All 5 rounds will pop in super fast.

The design makes it easy to drop rounds into the barrel. So you’re not just changing the way you fill your magazines. It’s truly faster than thumbing rounds one at a time.

Even though this magazine loader is quick, easy, and durable, it will cause a little bit of wear on your magazine feeder pawls. It won’t significantly shorten the life of your magazines. But pushing rounds straight down through the feed lips does cause a bit of wear.

However, you likely won’t even notice the additional wear unless you shoot A LOT. So this speed loader is still an excellent piece of gear to throw in your bag.

The Butler Creek ASAP Universal AR15/M16 Magazine Loader makes it super fast and easy to fill magazines. And it’s a great option if your ammunition comes packaged on stripper clips.

But, the loading arm can take rounds from stripper clips, which makes the process much faster. This is probably the most cost-efficient speed loader if you usually purchase bulk ammunition that comes packaged on stripper clips.

The only downside to this speed loader is that it causes a bit of additional wear and tear on your magazines, since it pushes rounds straight through the feed lips, just like other magazine loaders of this type.

However, the additional wear is very minimal. And the time and effort you save with this Butler Creek speed loader is more than worth it.

The Maglula LULA AR-15/M-15 Loader/Unloader makes filling AR-15 magazines insanely easy. It’s just not the fastest speed loader on the market. But it’s still faster than pushing rounds one by one.

The Maglula LULA AR-15/M-15 Loader/Unloader makes filling AR-15 magazines insanely easy. It’s just not the fastest speed loader on the market. But it’s still faster than pushing rounds one by one.

It’s super easy—easier than most speed loaders. And it causes less wear on your magazine feed lips than other speed loader designs.

However, you’re still pushing rounds into your magazines one by one. So it’s only a bit faster than filling magazines with your thumbs.

But, there are no rods or plungers. It’s super simple. And this speed loader is a bit more compact than some of the other options, as well.

Some people may not consider this magazine loader to be fast enough to qualify as a speed loader. But it’s faster than doing it with your thumbs. And it’s easier to use than most other speed loaders. Which is absolutely a good addition. 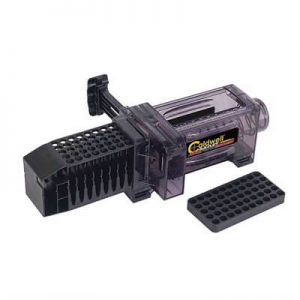 The Caldwell Mag Charger AR-15 Magazine Loader uses a very unique design that’s remarkably fast and easy to use. That’s why it’s one of the most popular AR-15 speed loaders out there.

The thing that makes this speed loader unique is that it uses a feed tray to stage the rounds. Then all you have to do is press the spring loaded plunger to push 5 rounds into your magazine. It automatically advances to the next 5 rounds.

So you just press the plunger until your magazine is full. It’s remarkably fast and easy.

And the feed tray is relatively easy to fill. This speed loader comes with a transfer tray. So you can quickly and easily transfer rounds from the packaging to the feed tray. It makes the entire process very fast.

This speed loader will cause more wear on your magazine feed lips than manually filling magazines.

However, it’s also significantly slower if your ammunition is packaged on stripper clips, because you have to remove the rounds from the stripper clips first. This is better for those who buy ammunition packaged loosely in an ammo can or in individual boxes.

But these are minor issues. This Caldwell speed loader is hands-down the fastest AR-15 speed loader for the money. 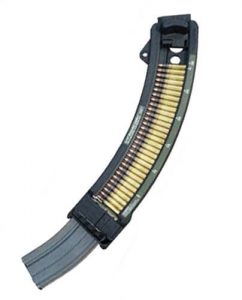 If you like to fill your magazines at home before you head to the range, this is an excellent AR-15 speed loader for you. The Maglula Range BenchLoader is to make filling magazines super fast and easy if you have a bench to work on.

This magazine loader is essentially a jig. You just line up as many rounds as you need (up to 30), and use the plunger to push all of them into the magazine at once. It’s quick, easy, and insanely satisfying.

There are markings on the jig to show you how many rounds you’ve got staged. And the rounds can easily be inspected prior to filling your magazine, which is ideal if you buy remanufactured ammunition.

It will cause the same sort of wear on your magazine feed lips as other magazine loaders that push rounds straight into the magazine. And it does take a little bit of prep work to get all the rounds into the jig.

But this Maglula speed loader still makes filling magazines remarkably fast and easy. It’s ideal for ranges and anyone else who regularly fills large quantities of magazines. 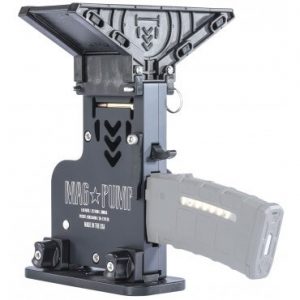 The Magpump Elite Mil-Spec AR-15 Magazine Loader is essentially a small magazine filling factory. And it’s one of the few speed loaders that’s optimized for use with loose ammunition.

It has a 90-round feed chute that you dump your rounds into. Then all you have to do is turn the hand crank to pump rounds into your magazines. If you didn’t have to turn the crank, it would be an automated magazine filler.

And you can literally dump rounds into it. As long as the rounds are parallel to each other, this speed loader automatically turns the rounds to the correct direction as they’re pushed into the magazine.

Also, the rounds are seated into the magazine one at a time, rather than being forced against the feed lips. So it causes less wear on your magazines.

Yes, this speed loader is expensive. And you need a stable surface to use it. But you can fill a 30 round magazine in less than 30 seconds. So it makes filling magazines faster and easier than any other magazine loader.

If you consistently fill A LOT of AR-15 magazines, this Magpump model is the speed loader to get.

When you shoot, you spend more time filling magazines than shooting. It’s always going to be easier to shoot bullets out of the gun than it is to put bullets into the magazine. But a speed loader makes it almost as fast to fill your magazines as is it to empty them, in addition to saving your thumbs.

Before closing this article, if you love hunting or looking for something to defend yourself with. We recommend you get lights attachment for your gun or rifle, very effective for blinding invaders or hunting night time.

If you want an affordable AR-15 speedloader that doesn’t cost much, get the ProMag .223 Magazine Loader. It’s inexpensive and saves you a lot of time at the range.

If you’re still bashing your thumbs on your magazines, it’s time to stop doing that. Get a speed loader, so you can spend more time shooting and less time hurting your thumbs. And while you're at it, get the most efficient case.

You may also check: