The Best AR 15 Suppressors for Cutting Down the Noise

Suppressors (or silencers, whichever you like to call them) have a reputation for being a tool of stealth assassins. This is mostly thanks to movies.

But it’s more accurate to view a suppressor as a safety device. Putting the best AR-15 suppressor you can afford on your rifle will help preserve your hearing in situations where you may not have the opportunity to don proper hearing protection.

Using an AR-15 with a silencer is still loud. And, you must use subsonic ammunition to guarantee that it’s quiet enough not to cause any hearing loss.

However—even without subsonic ammunition—a suppressor can make your AR-15 quiet enough that it won’t cause hearing damage in very limited use. A few suppressed shots with a suppressor, for something like home defense, will usually not have much long term impact on your hearing.

So, it’s totally reasonable to buy a suppressor to preserve your hearing, even if you’re not a stealth assassin.

With the safety caveats out of the way, these are the best AR-15 suppressors that I know of: 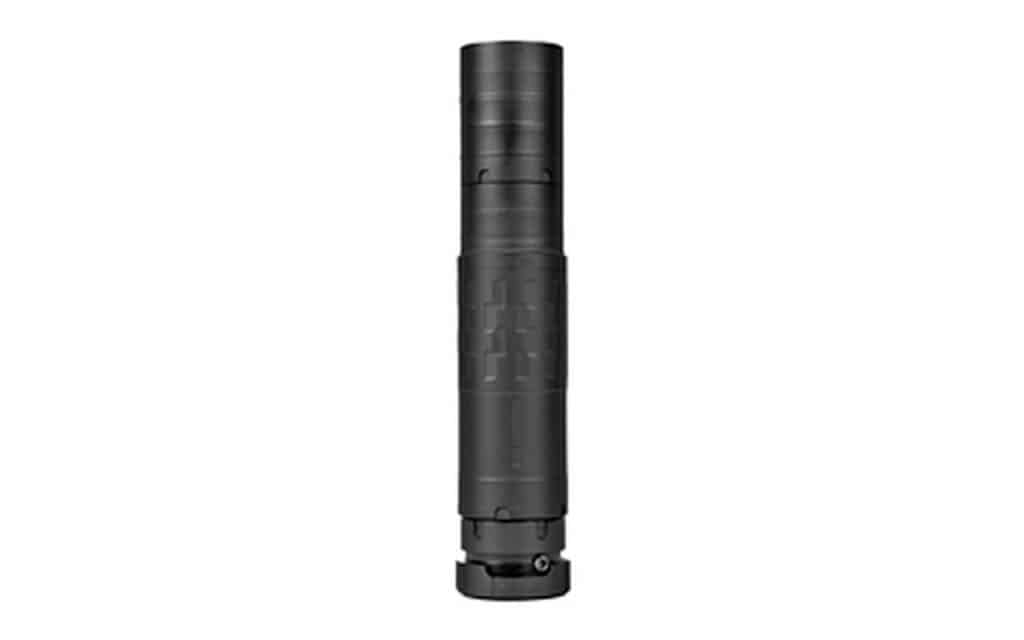 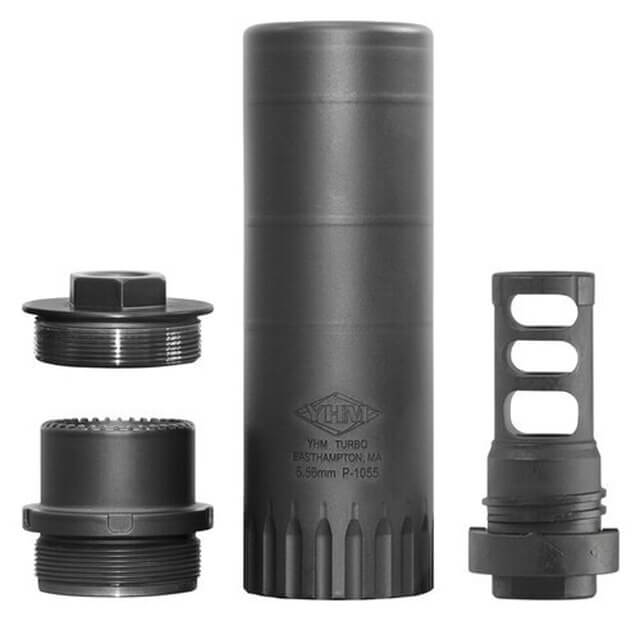 The SilencerCo 36M is one of my favorite suppressors, and one of the few that I’ve actually spent my own money to buy.

There are a couple of reasons why I really like this suppressor: the versatility and QD mount.

First, this is one of the few suppressors that works with both rifle and handgun calibers. It’s rated for rifle calibers up to .338 Lapua. And it handles up to 9mm pistol rounds.

It’s a true do-it-all suppressor, which is a rare thing.

So far, I’ve never had to use a tool to remove a SilencerCo ASR mounted suppressor. That’s not to say that it can’t happen. Your mileage may vary. But we’ve burned down a few SilencerCo suppressors on full-auto guns. And the ASR mount didn’t lock up.

The ASR muzzle devices are also excellent. The flash hider works well. And the muzzle brake is one of the better muzzle brakes, even without the suppressor DQ mount.

Lastly, the sound reduction is great. I don’t have any sound measuring equipment.

But the sound is more of a thump than a crack. It’s more pleasant than many other suppressors if you happen to be shooting without hearing protection.

My only complaint is that the finish discolors pretty quickly if you get your suppressor hot. Mine developed a gray stripe somewhere around 1000 rounds.

But that’s just aesthetics. The suppressor itself has held up incredibly well.

If you can only have one suppressor for all your guns, this SilencerCo is the one to get.

The Yankee Hill Machine Turbo K is one of the most popular suppressors around because it’s so affordable. And it’s a solid suppressor.

The blast baffle is relatively far from the rear end of the suppressor, which creates a larger blast chamber. This reduces wear on the baffles and distributes heat more evenly. This is part of what makes this a full-auto rated suppressor, even though it’s very small.

Speaking of small, this suppressor is tiny: about 5.5 inches long, with the QD mount. It’s great if you want a really compact platform.

YHM also makes a standard Turbo suppressor, which is around 6.5 inches long. However, the standard variant is more expensive. So the compact model is a better value.

However, the short suppressor design does make this suppressor a tad on the loud side. Still okay for a few shots without hearing protection. But there are quieter suppressors out there.

Also, the QD mount is super quick and easy to use. But it’s a bulky QD system. The YHM QD mount is about an inch long. That’s a lot of space for a QD mount. Many of the competing QD systems take up half as much space.

But, despite the huge QD mount, this suppressor easily delivers more value for the money than any other suppressor I know of.

The SilencerCo Saker 556 is one of the most affordable AR-15 suppressors out there. No, not the least expensive. But the value is excellent.

Quick Tip: If you want to save even more money, get the discontinued Specwar 762 before it’s gone. It’s similar to the Saker 556, but less expensive.

In many ways, the Saker 556 is just a SilencerCo 36M without the two-piece design and multi-caliber support. It’s the limited versatility that makes this suppressor less expensive.

However, there is an upside: this suppressor makes 5.56mm slightly quieter than the 36M, thanks to the 5.56mm muzzle cap. Only slightly quieter, though. Most people probably wouldn’t notice the difference between the two suppressors without sound measuring equipment.

Also, the Saker 556 comes with the SilencerCo MAAD mount. Some people like the MAAD mount better than the ASR mount, because the operation is simpler. You basically just screw the suppressor onto the mount and the spring tension locks it in place.

Ultimately, this suppressor is an affordable option if you want a dedicated 5.56mm suppressor that will live on one of your rifles or that you use on multiple 5.56mm rifles.

The SilencerCo Omega Suppressor is one of my favorite multi-caliber suppressors. And it’s one of the more popular suppressors on the market.

It’s not quite as versatile as the 36M, because it’s a single-piece suppressor. There’s no two piece design to give you the option for a shorter form factor. But this suppressor is rated for full-auto fire with calibers up to 300 Winchester Magnum.

Additionally, the sound suppression is excellent. Even with the 30 caliber end cap, the report is relatively quiet. But, similar to the 36M, the sound is more of a thump than a crack, which makes it comfortable enough without hearing protection.

Also, the muzzle brake end cap is surprisingly effective, especially for an AR-15. Even with a well-tuned gas system, a suppressor can make your rifle recoil a bit more sharply.

The muzzle brake end cap on the Omega suppressor helps offset the additional gas in your rifle’s gas system. It’s even effective enough to reduce the recoil a bit, if your rifle isn’t too overgassed with a suppressor.

The muzzle brake end cap adds an additional inch or so. But this suppressor is already slightly longer than 7 inches. So what’s an extra inch?

The Rugged Suppressors Radiant 7.62 is another two-piece suppressor that offers exceptional versatility. This suppressor can handle full-auto fire with up to 300 RUM.

Additionally, in it’s short configuration, this suppressor is impressively compact. It’s just over 5 inches long without the extension module. And that includes the QD mount.

Then, the baffles in the extension module are titanium, which makes for a lightweight overall package when running this suppressor in the full configuration.

Unfortunately, titanium isn’t quite as corrosion resistant as some other metals. But it’s very lightweight. In short, this suppressor trades lifespan for less weight.

However, most people won’t notice the difference in durability between a titanium suppressor and a more durable steel or inconel suppressor. It’s still a full-auto rated suppressor. So it will last a ridiculously long time on a typical semi-auto AR-15.

Personally, the thing I like best about this Rugged suppressor is the Dual Taper Locking quick detach mechanism. It’s similar to the SilencerCo ASR mount, but simpler. Rather than using locking teeth, it uses a locking clamp.

It’s a secure locking system that’s about as simple as it gets. I’ve also never had a problem with the Dual Taper Locking muzzle devices getting carbon locked. But others at the range have had Rugged Suppressors get a little stuck.

All in all, though, this is one of my favorite modular suppressors that sounds really good and adds very little bulk to your rifle.

Surefire suppressors are known for their durability. That’s one of the reasons they’re approved for operational use by the U.S. special operations command.

Surefire suppressors are known for their durability. That’s one of the reasons they’re approved for operational use by the U.S. special operations command.

The construction is top notch. And the mounting system is robust. Surefire also has one of the best selections of muzzle devices on the market.

However, Surefire suppressors also use an internal venting system that helps minimize gas blowback. It works.

But the gas system on your rifle is still the thing that most determines how much gas you get in your face. A Surefire suppressor won’t overcome the gas blowback from an overgassed system.

But, this suppressor is still compact, bombproof, and impressively quiet for such a small suppressor.

It might be a little bit expensive. However, Surefire fans are justified in their argument that this suppressor is worth the price.

There’s no other suppressor design that primarily vents gas out the front. And it really does cut down on how much gas flies in your face.

However, it’s also impressively quiet. Gases circulate inside the suppressor before they vent out the front. That way the forward venting doesn’t make much noise.

The only real downside is that it’s a fairly dense design. At 15.5 ounces, this suppressor is a little heavy for a compact suppressor.

But the added weight is a reasonable price to pay for a suppressor that pushes so little gas back toward the shooter and into your rifle’s gas system.

This is a great suppressor if you want less gas in your face. And the venting system is even smooth enough to help with an overgassed rifle.

The Rugged Suppressors Micro 30 is the other suppressor that I’ve actually purchased for myself. It’s similar to the Radiant 7.62, but shorter overall.

However, all of the baffles in the Micro 30 are stellite. Stellite is more corrosion resistant than titanium. But it’s heavier.

I like the added longevity and durability. So I don’t mind the extra weight. But this suppressor is a tad heavier than the Radiant 7.62.

However, the Dual Taper Lock system is excellent. And, in the short configuration, this suppressor adds just 3.5 inches to the overall length of your rifle. It’s an impressively compact package.

It’s also impressively quiet for such a small suppressor. It’s one of the reasons I use this suppressor over some other compact suppressors. The sound is more of a thump than a crack, which is what I like.

Overall, it’s a short, reasonably quiet suppressor that you can often get a pretty good deal on.

I really like the Dead Air Armament Sandman-S Suppressor.

The reason I don’t own one of these is because of the KeyMo QD system. I’ve seen some severely carbon locked KeyMo suppressors in the gunsmithing shop. They literally had to take the gun to a gunsmith to get the suppressor removed.

To be fair to KeyMo, it’s really easy to use. It’s durable. And there are a lot of KeyMo muzzle devices. KeyMo is a capable mounting system.

But you have to keep it reasonably clean. To be fair again, you shouldn’t have a problem if you keep your suppressor and muzzle device clean.

KeyMo just might not be the best option if you’re the type who tends to put their suppressor on and leave it there for thousands of rounds.

The potential issues with KeyMo aside, the Sandman-S is an outstanding suppressor. The vast majority of people won’t have an issue with the KeyMo mount. And it can handle anything you throw at it.

That’s our short list of suppressors. If you use a carbine for defense, a suppressor is a smart investment for you and your family—especially if you use a short-barreled rifle. SBRs are loud.