Best Bullpup Rifle: Get the Most Performance Per Inch

Bullpup rifles have been around for several decades. But, they’ve gained some recent popularity, and for a good reason.

The bullpup design might not be perfect. But it’s got some real upsides. Notably, the fact that you get the same performance as a traditional rifle, but in a package that’s only two thirds the size of a standard rifle.

Unfortunately, there aren’t a ton of options for bullpup rifles. More manufacturers are getting into the bullpup game. But it’s still a fairly limited market.

That’s why we’ve dug up the available options, and given them a good once over to see how they stack up.

Here’s the spoiler: the IWI Tavor XB95 is the best bullpup we checked out. It’s (mostly) affordable, and has performed well for both militaries and civilians.

However, it was a close race. So, stick around to see if a different bullpup might be best for you. 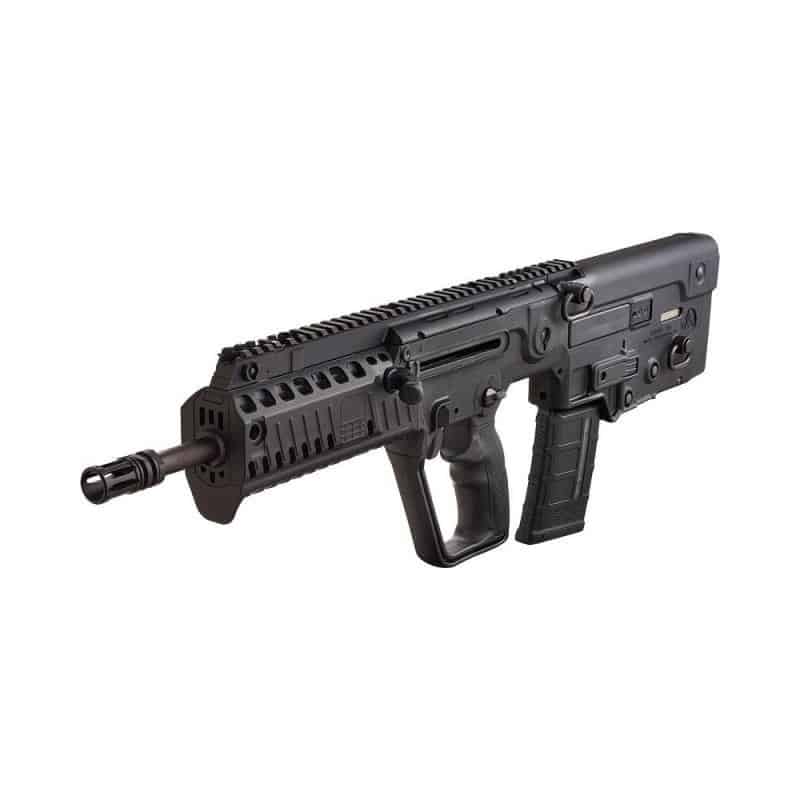 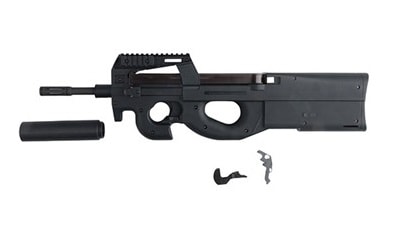 Best Bullpup Rifle Reviews: Who Packs the Most Punch Into the Smallest Package?

We’ll start with the Tavor, because it won the shootout. Then we’ll head on in order of price, from least expensive to least affordable.

The IWI Tavor XB95 300 AAC Blackout has been around for a few years, but it’s fairly new to the American market. This rifle definitely delivers on the promise of getting the most performance out of a short rifle. And IWI addressed some of the troubles with the bullpup design.

This model is chambered in 300 Blackout. This comes with ups and downs. The 300 Blackout offers better terminal ballistics and suppressed operation than the 5.56mm. However, it has a slightly shorter effective range. So, this is more of a tactical battle rifle than a long range precision rifle.

The barrel is 16.5 inches long. This is a really solid all-around length. It’s long enough to work in most wide open environments, without giving up the compact advantage of a bullpup rifle.

This model features an upgraded trigger pack from the original Tavor. The new trigger features a 5-6 pound pull weight, and smoother movement.

The upgraded trigger improves long range accuracy. But, there are a lot of connecting parts in a bullpup trigger. So, it’s still not as crisp as a good AR-15 trigger.

The magazine release is designed to mimic the operation of an AR-15 magazine release to ease the learning curve of transitioning to a bullpup rifle. If you’re accustomed to shooting AR-15s, this will make your reloads faster.

There are plenty of rail sections for attaching optics and accessories. But, this rifle doesn’t come with any iron sights. So, you’ll need to buy some sights, no matter what.

In the end, the Tavor takes first place because it’s the most capable and easiest bullpup rifle to adopt. If you’re accustomed to a traditional platform, it won’t be a struggle to adjust to the new position of all the pieces. And, it’s reasonably priced.

Since the practical applications for a bullpup rifle are mostly military purposes, there are few options for those that want a bullpup solely for recreation or training. The High Tower Armory Ruger 10/22 Stock Bullpup fills that void.

This rifle is patterned after the FN PS90, but the magazine is moved to a true bullpup position.

One thing you need to know right up front is that you’ll need the action parts from a Ruger 10/22 rifle to make this a functional firearm. So, plan for that in your budgeting. The good news is that you can have this part shipped directly to your residence. No need to ship to an FFL.

But, since it’s built around a 10/22 receiver, it takes Ruger 10/22 magazines. This is nice because they’re easy to get and affordable. So, you’ll save some money on the backend.

There’s one downside to this, though: the 30-round magazines are a bit awkward because the PS90 design is not intended to have a magazine in the bullpup position.

However, the entire package is incredibly compact. The overall length is just 26.5 inches. It’s very short and easy to handle.

This model takes a standard 18 inch Ruger barrel, and adds a flash hider and a dummy suppressor. It meets all the requirements as a full length rifle. So, you won’t need an SBR stamp.

Since the action is moved, the trigger suffers from the same connecting rod issues as most bullpup rifles. The trigger is not tremendously crisp or smooth. But, it’s good enough for most casual shooting.

The sight mount has rail sections on three sides for attaching optics. There’s also a square peep sight in the sight mount. However, it’s only accurate at very short distances.

Although the ejection port isn’t ambidextrous, there’s an included brass deflector to make it easier for left-handers to shoot.

Although Kel-Tec has gotten a bit of a reputation for building cheap guns, the Kel-Tec RDB Carbine represents a real step forward for the company in terms of improving their reputation.

This rifle sports a 17.4 inch barrel. The accuracy and maneuverability are pretty much the same as an 18 inch barrel. Solid performance at most ranges. But no compromise on ease of handling.

Where this model separates itself from other bullpups is in how the brass is ejected. Spent casings are pulled backward, all the way behind the magazine, then dropped straight downward, where they fall out the bottom of the gun through a chute.

It’s a smart design because it’s passively ambidextrous. No switching the ejection port for left-handed shooting. And, there are relatively few issues with it. The only struggle is that the brass tends to build up underneath you when you’re shooting from the prone position.

The magazine release is on the front of the magazine well. It’s cool because you can release the magazine with either hand. But, it’s also entirely different than most traditional rifles. So, there’s a learning curve for those who are trained on AR-15s and other standard rifles.

It seems to be a trend. This rifle also comes with a flash hider, rather than a compensator. It’s a standard birdcage flash hider. Nothing special.

There’s a rail section along the top of the rifle. Plenty of space for mounting a primary optic. There are also attachment points on the underside of the forend for grip accessories.

The most pleasantly surprising thing about this rifle is the trigger. For a bullpup trigger, it’s very nice. Smooth take up, decently crisp break. It’s not the best. But it will work for precision shooting.

But, this rifle comes without iron sights. So, you’ll have to provide your own sighting system.

Lastly, it comes with a 10-round magazine. That’s sort of lame. But it takes AR-15 magazines. So, it won’t cost much to get more and higher capacity magazines.

The RBD does an excellent job of addressing two big issues with bullpup rifles: the cost and left-handed shooting. It’s a great option for anyone who wants to get into the bullpup game for less than you’d pay for many AR-15s. 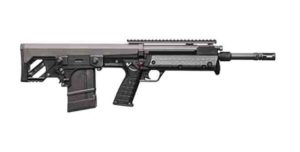 The Kel-Tec RFB Carbine is just the .308 version of the RDB Carbine. So, we’ll keep this brief since there’s very few differences.

Next, this rifle takes FAL magazines. This is a bit unfortunate. FAL magazines are harder to get than AR-10 magazines. So, if you want additional magazines, you may have to spend a bit Googling for them.

And, since this rifle takes FAL magazines, the magazine release has been moved to the back of the magazine well. So, it’s not easily accessible with both hands. You’ll need to use your support hand to release the magazine.

Other than that, you can check out the specs in the RFD Carbine section above for the rest of the details. They’re all the same.

The main appeal of this rifle is the .308 caliber. There aren’t a lot of bullpups with this chambering. So, this is a great option for those who are looking for an affordable .308 bullpup battle rifle or a designated marksman rifle. 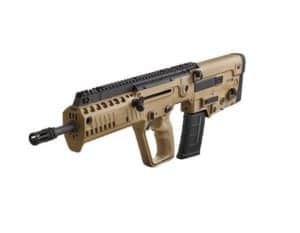 The IWI Tavor XB95 is one of the most popular 5.56mm bullpup rifles on the market right now, and for good reason.

This rifle capitalizes on the bullpup design with an 18 inch barrel. It offers higher muzzle velocity and longer effective range than a 14.5 inch M4 barrel or a 16 inch AR-15 barrel. But, this rifle is still shorter than most standard carbines.

The barrel is capped with a standard birdcage flash hider. It’s an adequate muzzle device. However, for the price, it seems like a higher performing muzzle device would be suitable.

To improve the ergonomics of the original Tavor design, the XB95 uses an AR-15 style magazine release. That way there’s less of a learning curve for those who are accustomed to running AR-15 type rifles.

This model uses the upgraded Tavor fire control pack, which removes some of the grit and mushiness in the trigger press. Also, the trigger more reliably breaks at between 5 and 6 pounds. However, it’s still a bullpup trigger, which is not as crisp or clean as an AR-15 trigger.

There’s a Picatinny rail along the top of the rifle for optics. Unfortunately, this model is not equipped with Picatinny accessory rails.

Lastly, the grip can be swapped out for a standard pistol grip, rather than the futuristic Tavor grip with a full guard.

This may not be the perfect rifle. But, this model offers excellent performance in a compact package that’s great for working in tight environments and vehicle borne operations, with all the capabilities of a 5.56mm rifle. 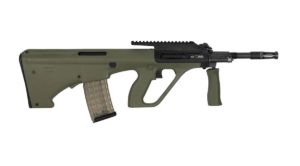 The Steyr Arms Aug A3 M1 is one of the most easily recognizable rifles in the world. It’s one of the oldest bullpup rifles. Steyr has updated the design and components to keep the Aug relevant.

The barrel is 16 inches. It’s shorter than some of the other bullpups. But it’s capable enough for any tactical situation, and delivers enough precision for use in outdoor tactical environments or competitions.

Steyr updated the A3 model to accept AR-15 magazines. This reduces the cost of ownership, since Steyr magazines are rather expensive.

There are a lot of rail sections for attachments and optics on this rifle. Some of them in places that we’re not even sure if it makes sense to put an accessory. However, there’s a built-in foregrip. So, you have only one forward grip option.

The trigger is solid. Steyr is known for producing good triggers. But, it’s still a bullpup trigger. Not quite match-grade.

There’s also an adjustable gas system, in case you want to run a suppressor.

In the end, this rifle is most suitable for those who want a tried and true bullpup design, and don’t mind paying a little extra for the reputation.

At the Bottom of the Magazine

A bullpup rifle is an excellent addition to any shooter’s collection. The compact design makes them both versatile and capable enough for almost any shooting context.

If you want a bullpup rifle that’s at the top end of the performance spectrum, without the top end price, get the IWI Tavor XB95. It’s the best blend of performance and cost on the bullpup market right now.

So, check out some of these rifles. If you’ve been itching for a long gun that works in tight spaces without cutting barrel length, a bullpup rifle might be just what you need.