Do you have nosey neighbors who complain about you firing your firearms to tend to pests around the house? You can back off the noise and be more discrete about what you’re doing without allowing the pest to have their reign.

Crosman has been making these types of products that have been used by several generations, and they know a thing or two about what they’re doing.

We will take a closer look at six of the top Crosman models available, give you a suggestion on which one is the best of the lot and give you plenty of information to make your own choice.

The Crosman Fire Nitro Piston draws your eye to it pretty quickly because of its sleek, modern design. This model has more than just a pretty face; it features nitro piston technology for a smoother, more reliable shot and less noise and vibration. 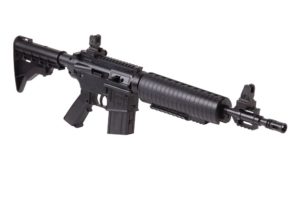 It comes with an all-weather, synthetic stock, steel barrel, a two-stage adjustable trigger and a fixed magnification scope.

This is a far cry from your dad or granddad’s Crosman BB gun. Fitted is a serious gun for hunting, pest control, and target shooting.

With a gas piston power plant, there is no spring fatigue and wear which weakens over time, and it delivers the projectile downrange with a velocity which rivals most of its competitors.

It is fit with a fixed magnification scope that is adequate given its range which makes it more affordable. This is not going to work for competitive target shooting, and some users claim that it doesn’t group shots well.

In contrast to the Crosman Fire above, the Crosman Venom has a more traditional look and feel to it. Its attractive hardwood stock draws your attention as well, and it has all of the same impressive features of the Fire as well. It is powered by a nitro piston for greater dependability and accuracy; it includes a steel barrel, a 2-stage adjustable trigger, built-in noise reduction and a variable magnification scope.

The traditional hardwood stock design is better suited for some, as is the higher caliber. The same gas piston technology in this product makes it more dependable and longer lasting over time than spring powered models. With the higher caliber projectile and decent kill force, hunting larger small game is an option, but it probably will not be great for competitive target shooting. There is no point in putting the more expensive variable magnification scope since its range is less than 100 yards.

The classic designed, all-weather synthetic stock and rotary pellet clip magazine on the Crosman RepeatAir are two features which draw your attention. This CO2 charged unit allows for semi-automatic fire down a barrel for quicker firing and higher accuracy. It features a fully adjustable rear sight and a fiber optic front sight as well.

You will like the fact that you have semi-auto firing action. The removable pellet clip magazine and the CO2 charged cartridge allow this to happen. This has the more durable, all-weather synthetic stock in a classic design instead of plastic like some of the other in our review. It is painfully slow, which limits not only its range but also its usage to plinking and pest control. It is budget priced, so don’t be too concerned about spending too much money and being dissatisfied when it doesn’t live up to your expectations. 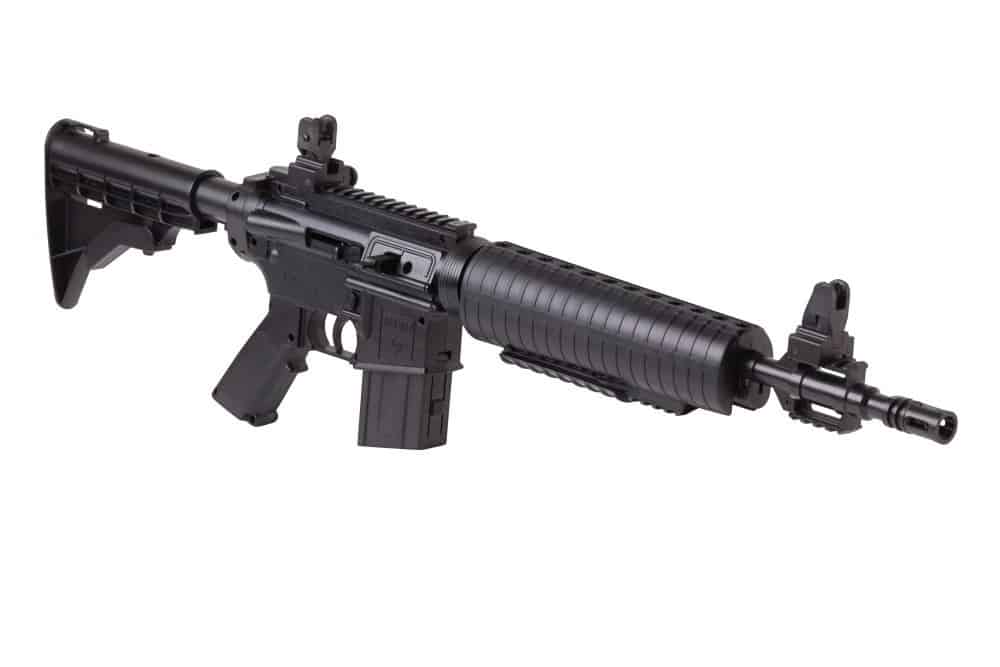 Those who are impressed by the AR platform will like the M4177 Pneumatic Pump Gun’s design and adaptability. It utilizes multi-pump pneumatic air as its power plant. It features a rifled steel barrel, an all-weather synthetic stock that is adjustable for every user, removable pellet clip magazine, a rail for adding accessories, and detachable and adjustable open sights on a Picatinny rail.

Your first thought when you see this model might be, “cool,” but as you get a better look at it, you won’t be nearly as impressed. It is a multi-pump unit which means that you have to pump it several times to build up enough power to fire the projectile. It has a velocity that is not much better than your average BB gun. It has some redeeming qualities. Its adjustable AR design and the clip magazine are a nice touch, and its Picatinny rail for both accessories and the adjustable open sights are also agreeable as is its budget price.

Mostly, it is for plinking and maybe tending to pests.

With the Crosman Legacy you get more power and velocity than with most variable pump pneumatic models. The steel receiver holds up to 200 BBs, but it can also fire pellets loaded in the breech. It features a rifled steel barrel, a synthetic ambidextrous stock and a fixed magnification scope. What can be said about this unit? It is a multi-pump pneumatic product made of plastic except for the receiver and the barrel.

It has some nice features like a higher velocity and a fixed magnification scope. Both of those features outweigh traditional BB guns as well as traditional pneumatic powered air guns. It is budget priced, so you won’t worry too much about spending your money on something used for plinking and pest control.

With few changes down through the decades, the Crosman Classic 2100 is what generations of users have come to expect from Crosman. This is a multi-pump pneumatic gun with a steel receiving chamber and a rifled steel barrel. It is constructed of synthetic material in the stock and forearm and features visible impact open sights. This is a step up from the traditional BB gun.

The pneumatic air power plant which is charged by pumping it up delivers more velocity and power than the traditional spring powered models, but it is a pain in the butt when you are trying to get off a decent shot at pests or small game. It does feature a rifled steel barrel and steel receiver, but the rest of the gun is made of plastic. It is budget priced, so you won’t put a lot into something that you can use for plinking and picking off a few pests around the house.

Discretion for tending to pests around the house can be achieved through the use of an air gun in place of a regular firearm. The trusted name of Crosman has been providing this type of discretion and safety for many generations and still has a wide variety of models to choose from.

The Crosman Fire Nitro Piston stands out far above all of the other models in our review.

It has a durable, all-weather design which is lightweight.

It is powered by a gas piston rather than a spring or pneumatic pump, which provides the velocity to make it a good match for pest control, small game hunting or target shooting.

It is priced to fit nearly every budget, but still delivers on quality, so it is very much worth the money.

There are other options in the review above which may or may not be better suited to your needs.

If one of the others better suits you and you prefer not to follow our recommendation, that is certainly an option, but purchasing a Crosman is certainly a good choice because their quality tends to exceed their price.