How to Fill Your Glock Magazines Fast: The Best Glock Speedloaders

And—as if that weren’t bad enough—Glock magazines can be a bit tougher on your thumbs than some other manufacturers’ magazines. So a good Glock speedloader goes a long way toward evening out that bullets-in-to-bullets-out ratio of time, effort, and energy expenditure. 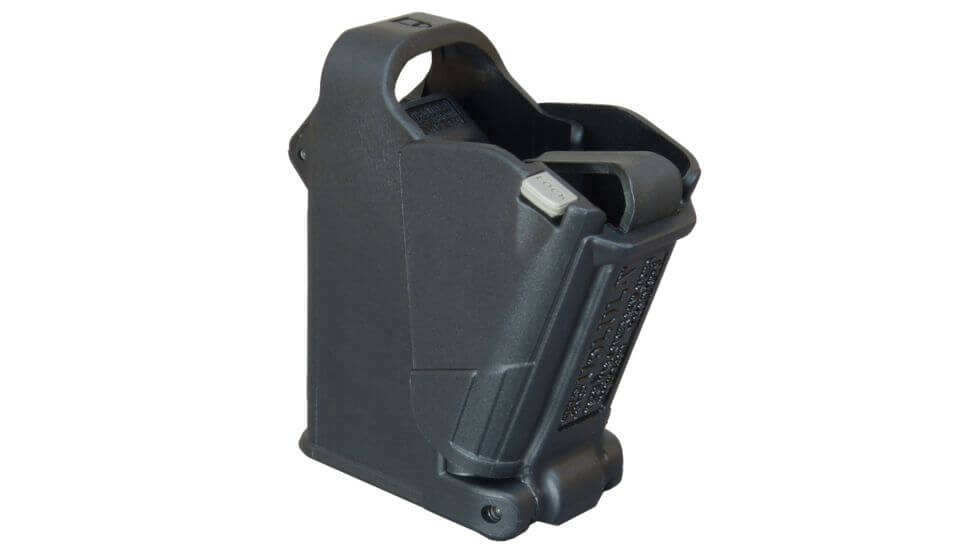 SPOILER—filling Glock magazines isn’t rocket surgery. So if you want to get a speedloader without doing any reading, get the Maglula UpLULA Pistol Magazine Loader. It’s simply the best all-purpose pistol magazine loader on the market.

But there are other magazine loaders out there. So we’ve gathered all the best Glock speedloaders. Keep reading to see how speedy all these speedloaders are. 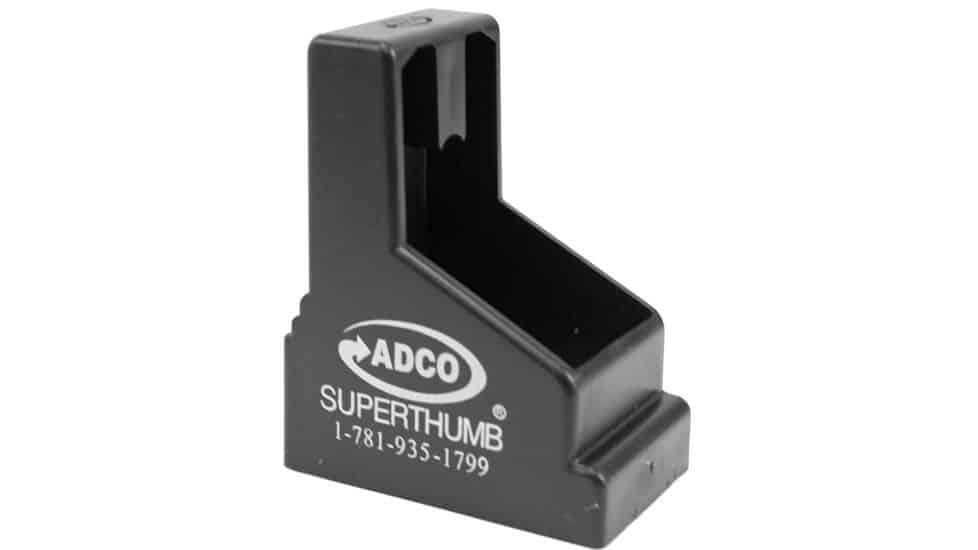 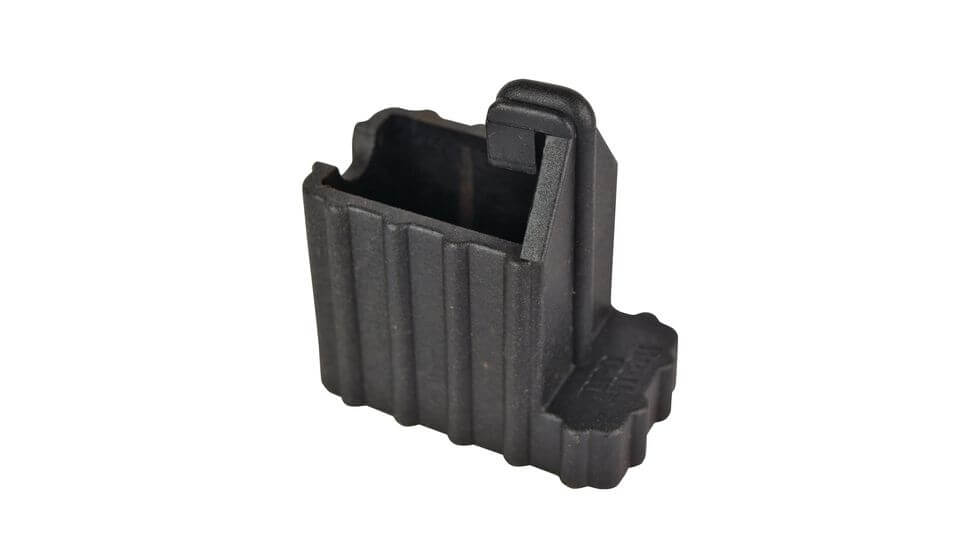 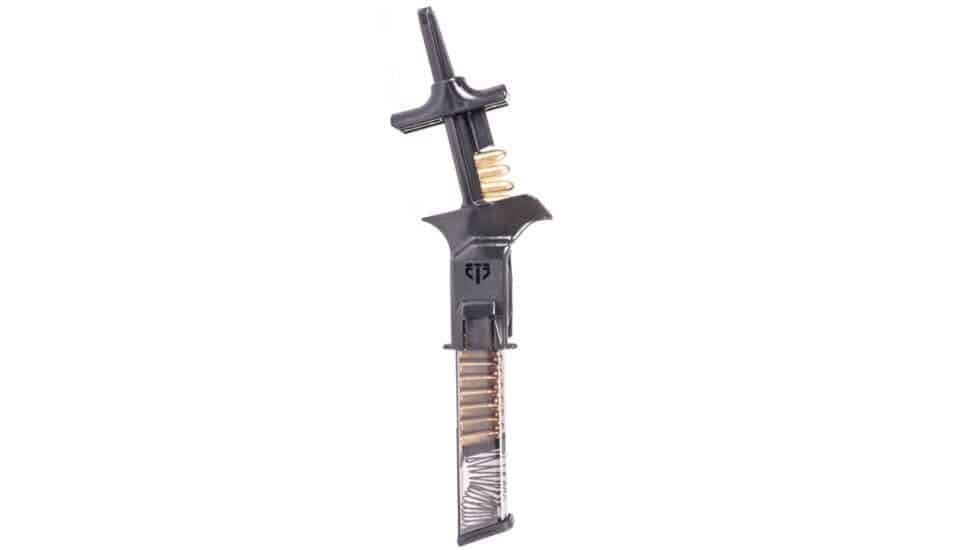 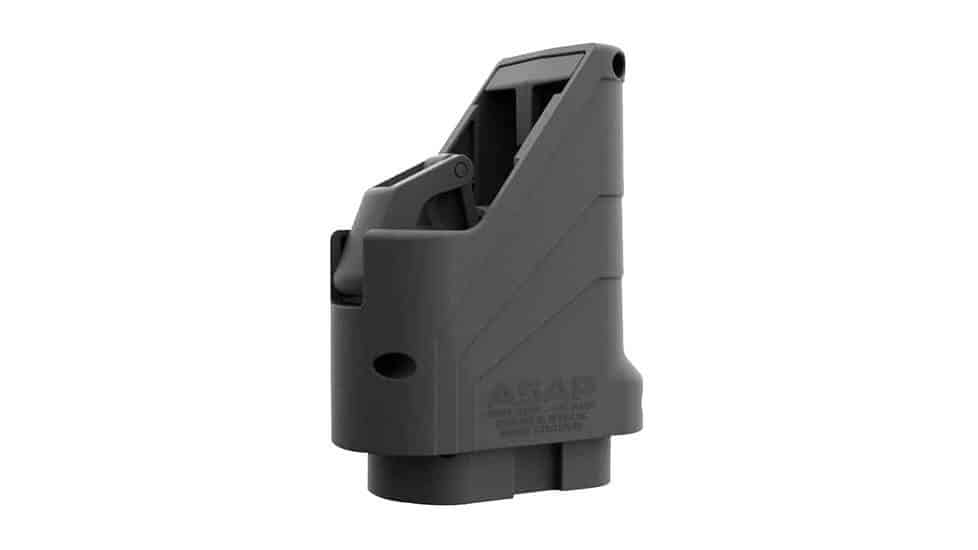 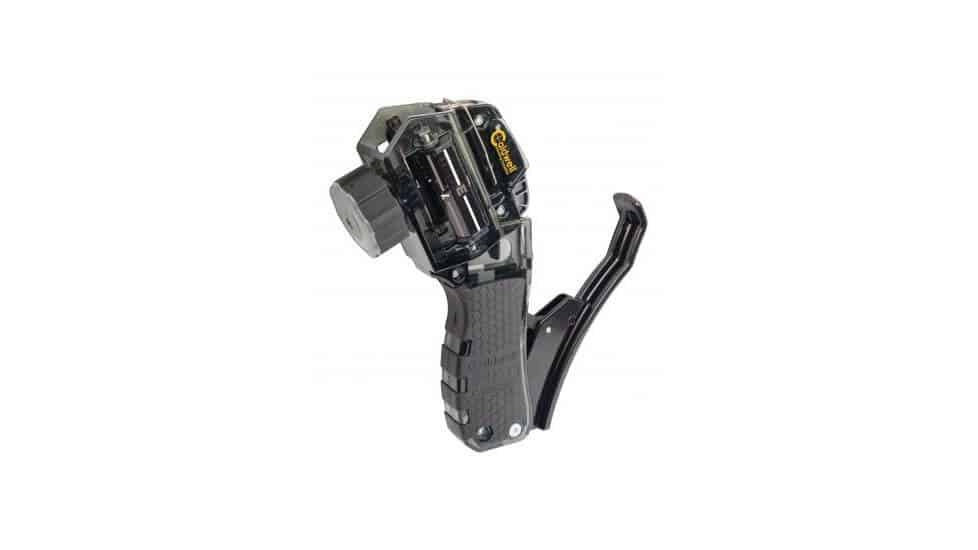 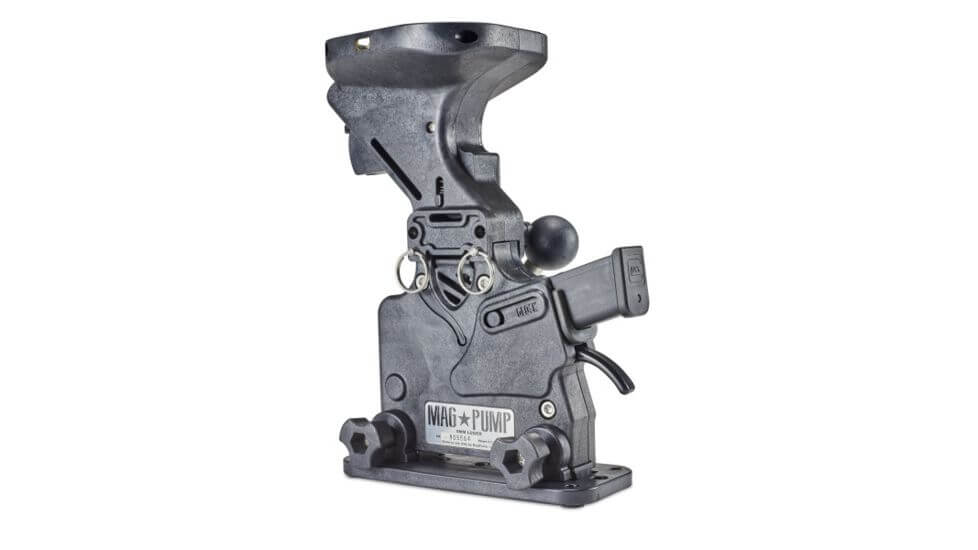 Our overall best Glock speedloader is up for review first. The remaining magazine loaders are lined up in order of price.

The most affordable Glock speedloaders are first.

The luxury speedloaders are near the end.

As far as I’m concerned, the Maglula UpLULA Pistol Magazine Loader could be the only speedloader in this article.

Get yourself an UpLULA. Article over.

Just kidding. That’s not how we roll here.

The thing I love about this speedloader is how simple and effective it is. Just squeeze the loader. Press it down. Drop a round in. Then let the loader go.

The only real downside is that you’re still putting rounds into the magazine one at a time. So it’s not MUCH faster than loading rounds by hand, if you’re good at it.

There’s a reason this is one of the most popular speedloaders around. It might be THE most popular magazine loader on the market. It’s affordable and is a remarkable improvement over pushing round with your thumbs.

The ADCO Super Thumb II Magazine Loader for Glock is a really affordable speedloader that sacrifices only a little bit of convenience to deliver a magazine loader at a lower price.

This magazine loader works very similar to other speedloaders like the MagLULA. However, the device is much simpler and adds a step to the process of putting each round into your magazine.

You put this speedloader over the mouth of your magazine and push down to depress the top round. Then you drop the round in. But, once you release the pressure on the top round, you have to push the round back to seat it in the magazine.

It’s easier than loading rounds by hand. And it’s faster, once you get the hang of it and develop a system for depressing the magazine loader and pushing the round back. But it’s only marginally faster than thumbing round.

However, this ADCO model will save a lot of wear and tear on your thumbs. And, for the price, this is actually a really good Glock speedloader.

The Promag Glock Double Stack 9mm/.40 S&W Polymer Magazine Loader is another super affordable speedloader that reduces your magazine filling time by a decent bit. However, it’s still not as automatic as some higher priced models.

This model probably sports the simplest operation of any magazine loader besides the stock Glock magazine loader. You don’t really even need to squeeze the loader to work it.

This model uses a small shelf for your hand, that way you just have to press it down. The hook depresses the top round. And you can just drop the next round in, then release the pressure. The feeder pawls will capture the next round. All you have to do then is press the round to the back of the magazine.

It’s a very simple process, albeit one step longer than some other magazine loaders. And, once you get into the rhythm, it’s pretty fast. It also saves you from a lot of thumb pain.

This Promag speedloader isn’t fancy. And the improvement to your magazine filling time is modest. But it comes at a super affordable price. So it’s still a really good deal.

The Elite Tactical Systems C.A.M. Loader is one of the few pistol magazine loaders that actually fills magazines in what is essentially a single stroke.

This magazine loader works similar to a stripper clip. You simply use the rail to scoop up rows of rounds from the packaging tray. Put your magazine into the loader. Then press the plunger down to put 10 rounds into your magazine in one swift motion.

Also, the loader is angled. The rounds aren’t forced between the feeder pawls. They actually slide to the back of the magazine properly. So there’s no extra wear and tear on your magazines.

There are only two real downsides.

First, you have to oil this loader a bit. Otherwise it tends to stick.

Also, you need to have your ammo in a tray in order to pick rounds up with the loading rail. this magazine loader isn’t really any faster than loading by hand if you have loose rounds in an ammo can.

So it’s best for people who buy boxed ammo.

However, this Elite Tactical Systems item is a true Glock speedloader that makes filling magazines stupid fast. And it’s more affordable than almost any other automatic magazine loader. Win-win.

This speedloader actually has a really cool design that enables you to put rounds in your magazine without needing to squeeze the magazine loader or push the round to the back of the magazine.

All you need to do is push this loader down, over the top of your magazine to depress the follower or previous round, drop the round in, and release the pressure on the magazine loader. It’s super simple and quick. And it requires almost no grip strength or thumb punishment.

Since the process is so simple, this is probably the fastest magazine loader that doesn’t fill more than one round at a time. However, you’re still putting rounds in the magazine one at a time. So not as fast as a speedloader that loads multiple rounds at once.

However, this Butler Creek magazine loader will still fill your magazines with millions of rounds over the course of its life.

It’s definitely more expensive than some of the simpler magazine loaders. But the loading process is super easy and simple. And the convenience is well worth the price.

The Caldwell Mag Charger Universal Pistol Loader is almost an automatic magazine loader. However, it does require a bit more grip strength than some other options.

Using this speedloader is super simple and easy. Put your magazine in the loader. Add a round to the ammo port and squeeze the pistol grip to snap each round into your magazine.

This model is very simple to use, though. If you have coordination issues with filling your magazines, this speedloader solves those issues.

My only concern with this speedloader is the durability. It’s a lot of moving parts and springs. Now, it’s well made. And I haven’t seen one break yet.

But I know that more moving parts and springs means more potential points of failure. And I’m not entirely sure what the expected lifespan of this speedloader is. Although, I suspect that the average shooter will never wear this speedloader out.

On the bright side, this Caldwell speedloader is much more affordable than I expected. Yes, it’s more expensive than the other hand loaders. But not by much.

So it’s a great option for those who want to fill magazines faster, with a much simpler process than filling by hand or even using a standard handloader. And the price is super reasonable.

The MagPump is an amazing rifle magazine loader. But the original versions of the MagPump 9mm Pro Magazine Loader were less impressive because they tended to jam. This new model seems to be more reliable, though not perfect.

This speedloader is almost entirely automatic, though. You just dump your rounds in the feed chute and crank rounds (or pump them, if you will) into your magazine. It’s super easy. And reasonably fast.

There’s only one problem: this magazine loader can jam. And sometimes it does.

It doesn’t jam nearly as often as the old versions. But it’s still not perfect. However, it’s reliable enough that you can fill a lot of magazines quite quickly, with zero abuse to your thumbs.

...And it’s kind of a legitimate question, because you never even touch the rounds to make sure they’re facing in the right direction. So I understand the distrust.

All in all, this Magpump item is a rather expensive speedloader. And it’s really only necessary if you load tons of magazines or you REALLY don’t want to fill your magazines by hand (which is totally understandable). But, if you’ve got the budget, this speedloader pretty much takes the responsibility of filling magazines out of your hands (almost literally).

Glock magazines can be a pain to fill. But they don’t have to be. You just need the right gear to help you out. And if you’re too tough to use a speedloader, you’re probably too busy to spend the majority of your range time stuffing magazines.

If it took you less time to read this article than it takes you to load up your Glock magazines, you need a Glock speedloader. It’s time to stop abusing your thumbs.