Target identification is always mandatory. No matter what type of shooting you’re doing. That means that you’ll need some sort of light source.

With a handgun, you can use a handheld light. However, that requires one-handed shooting.

A weapon-mounted light enables you to keep both hands on your gun while you shoot, regardless of whether or not you need your light.

There are training and tactical considerations for using a weapon-mounted light. But, if you’re going to use a pistol light, you may as well use the best one, right?

Spoiler for those who need to know NOW:

If you want an affordable and reliable weapon light, get the Streamlight TLR-3 Compact Weapon Light. It’ll do everything except bust your budget.

For the more curious folks, we’ll get into the weapon light options, so you can pick up the light that best fits your needs.

Top Pistol Lights to Check Out This 2023 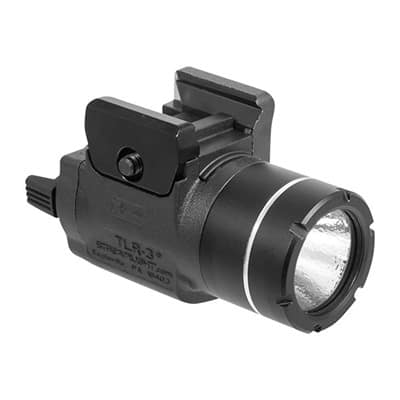 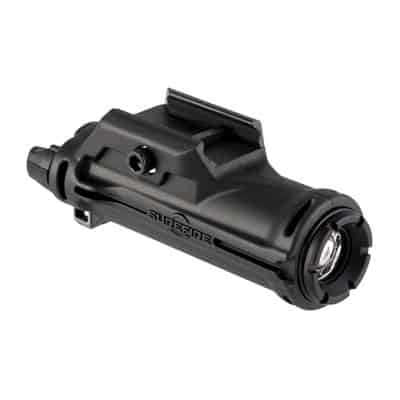 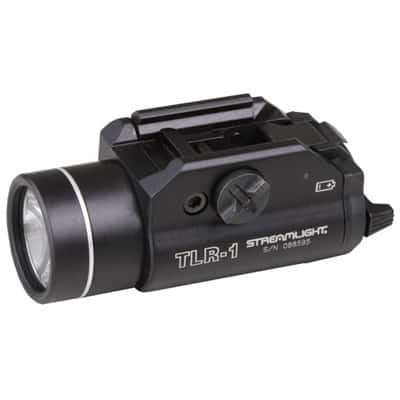 If you’ve perused the pistol light section of any gun store or website, you may have noticed that there are a couple companies that dominate the market: Surefire and Streamlight.

There are quality alternatives (which we’ll talk about). But, we’ll put our winner up front. Then cover the rest in order of price.

Time to light things up.

Streamlight has one primary light: The Streamlight TLR. They offer the TLR in multiple configurations to cover the most possible applications. But, the size and shape is pretty much the same, regardless of the model.

The Streamlight TLR-3 Compact Weapon Light is the standard model in the lineup. It’s low profile, and puts out 125 lumens of white light. That’s plenty of light for target identification. And the light is small enough to use on a concealed carry gun without being uncomfortable.

Streamlight also offers this light with a laser. The Streamlight TLR-4 is the same as the TLR-3, but with an integrated red or green aiming laser.

This light is operated with an ambidextrous switch on the back of the light that can be actuated with your trigger finger, or the thumb of your support hand.

So, you’ll get 1.5 hours of operation from one CR2 battery, no matter what. And, your battery will last for up to 10 years in storage. This is nice because our weapon lights inevitably spend more time off than on.

The rail clamp system provides a universal mount that fits any type of pistol rail, including Glock accessory rails. And, the body is short enough to mount on compact, and even subcompact pistols without protruding far beyond the muzzle.

Additionally, the light can be attached and removed with one hand, using the quick release mechanism.

Although this one may not be bright enough to reliably blind someone, it’s excellent for target identification in a home defense or concealed carry context.

Surefire was the dominant pistol light manufacturer for a long time. And they’re still a crowd favorite, despite the increased competition. The Surefire XH15 Handgun Light is designed to be a quality, bread and butter pistol light. Not a lot of frills, just good function.

One standout feature of this light is the brightness. The LED delivers 350 lumens of white light, which is impressive for such a well-priced unit. It’s more than enough for target identification, and could be blinding, if you use your light that way.

This model is powered by a CR123A battery, which delivers 1.25 hours of runtime. The battery life is decent in terms of time. But, it’s fairly good when you consider the brightness.

There’s an ambidextrous switch on the rear of the light that can be flipped with your index finger or support hand thumb. It’s handy for lefties and those who may prefer to avoid assigning multiple tasks to their trigger finger.

It’s a common characteristic of pistol lights, but this light protrudes beyond the muzzle of your gun, which might result in a slower draw, depending on your carry position and draw technique. But, with a practiced draw stroke, you probably won’t notice the difference.

But, in the end, this is an excellent all-purpose weapon light that’s a solid option for both civilian defenders and armed professionals.

The Streamlight TLR-1 Weapon Light delivers a lot of light in a relatively compact package, at a reasonable price point.

The standard TLR-1 produces 300 lumens of white light. This is enough for the vast majority of defensive and tactical contexts. It’s also bright enough to be blinding.

The Streamlight TLR-1 HL puts out 800 lumens. This obviously covers all the standard pistol shooting contexts. And it’s bright enough for those who may need to illuminate more distant targets.

There’s an ambidextrous rotary switch on the tailcap that you actuate by swiping up or down on the side of the light for quick on/off operation, and momentary illumination.

The LED is powered by 2 CR123 batteries that provide 2.5 hours of continuous runtime (1.25 hours for the TLR-1 HL). The battery life is solid. However, things could get a bit expensive if you use your light a lot, since it takes two batteries.

Lastly, this light is compact enough that it doesn’t extend much past the muzzle of your gun. So, it has a minimal impact on your draw stroke and concealed carry fit.

The price, performance, and size combine to make this an excellent option for tactical and defensive shooters who want illumination that doesn’t much change the size of their platform. 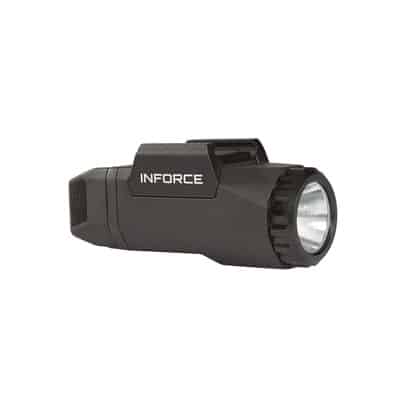 The Inforce APL Gen3 Weapon Light is streamlined and adds very little bulk to your pistol. But, there’s a lot of performance crammed into this little light.

To start, it produces 400 lumens of white light. It’s more than enough for defensive and tactical shooting, and could easily be used for blinding.

The light is controlled with an ambidextrous paddle system that’s easily accessible when using a high, modern grip technique. Additionally, there’s a lockout mode to keep the light turned off when it’s in storage or transit.

Lastly, the mounting system attaches to any rail system without tools. So, it’s easy to use on multiple guns, if you need.

Given the performance, this light would be an excellent choice for anyone. But, it’s especially nice for those who want to keep their pistol setup simple and compact, and those running compact or subcompact pistols. 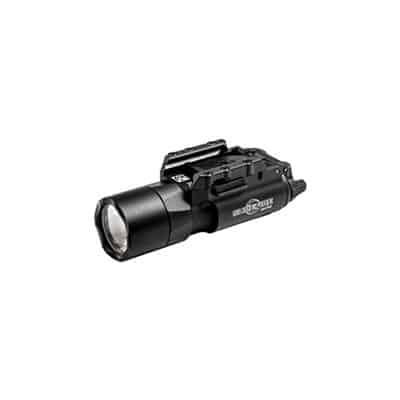 The Surefire X300U-A Ultra Weapon Light is designed for those who need the brightest light possible.

As you might expect from a light with “ultra” in the name, this light puts out 1000 lumens of white light. This is so bright that it might be overkill for some defensive applications. However, it’s ideal for armed professionals who may need long range illumination and area lighting.

This wickedly bright light is controlled with an ambidextrous rotary switch on the tailcap. And 2 CR123A batteries deliver 1.5 hours of light. The battery life is impressive, considering how bright this light is.

The mounting clamp mounts to any rail system. And, the body is compact enough that it doesn’t protrude too far beyond the muzzle, even on smaller guns.

Even though the performance is off the chart, this light is a bit on the expensive side. Also, 1000 lumens is enough that it could overwhelm your own dark-adapted vision, especially indoors.

But, it’s still an excellent choice for armed professionals and civilian defenders who have need for intense, long-range illumination.

The bottom line is that you need some sort of light for target identification in low-light situations (unless you have night vision). If you want to use a two-handed shooting grip when you shoot, you need a weapon light. So, you may want to put a weapon light on your shortlist of upcoming purchases.

If you’re ready to make a purchase right now, get the Streamlight TLR-3 Compact Weapon Light. It’s a solid light that produces enough light for almost any shooting context.