The Best Ruger 10/22 Ammo for Feeding the Little Beast

The Ruger 10/22 is undoubtedly a fun little gun. But you can go through some .22LR ammunition pretty fast. So you need a bucket or two of .22 ammo whenever you shoot it.

SPOILER—get a Federal .22 LR Value Pack if you want a whole bunch of the best Ruger 10/22 ammo you can get for the money. It’s reliable ammunition. And it’s hollow point ammunition. So you can use it for hunting, if you want. 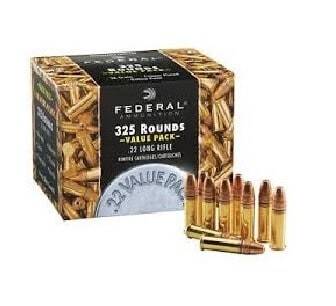 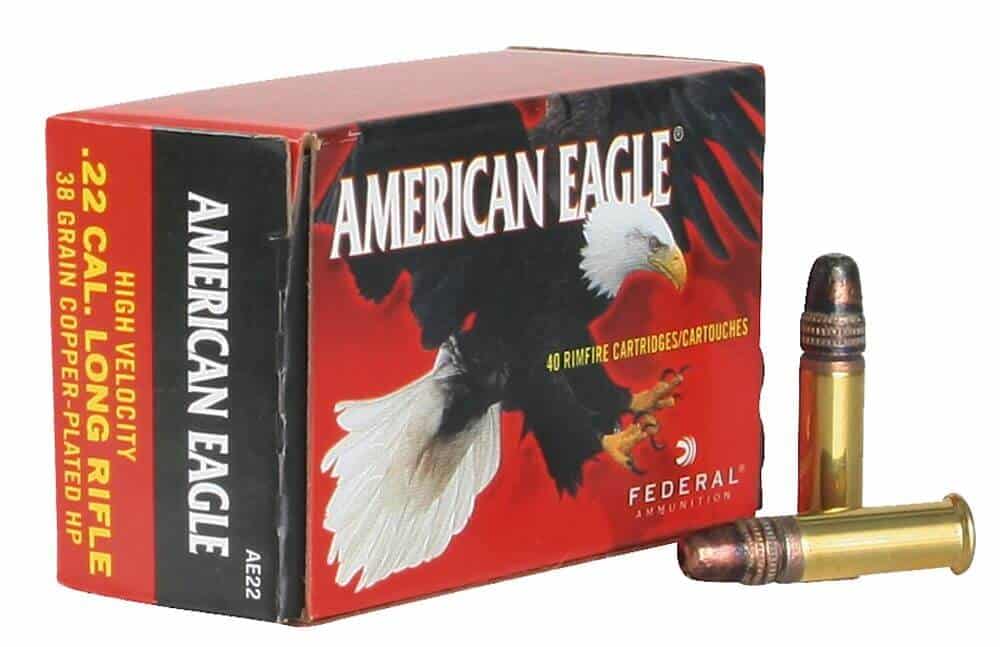 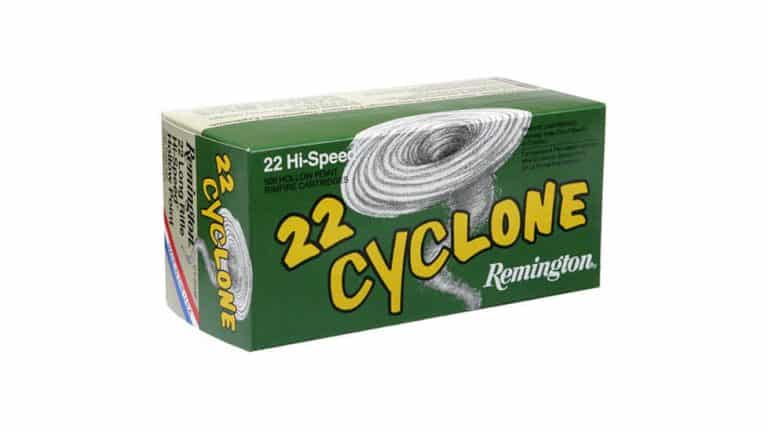 The Best Ruger 10/22 Ammo Reviews: What Sort of Bang Can You Get for Your Buck?

The most affordable Ruger 10/22 ammo is up first (by unit price).

The top tier, but priciest, .22LR ammo is near the end.

So hang out in this article where the products fit your budget.

The Federal .22 LR Value Pack can easily be your go-to Ruger 10/22 ammo for just about anything.

It’s copper plated hollow point ammunition. So it minimizes barrel wear. And it’s effective enough for hunting small animals, if you use your Ruger 10/22 as a hunting or survival rifle.

However, the bullets are just 36 grains. That’s reasonably heavy. But, if you use your Ruger 10/22 as a dedicated hunting or survival rifle, you may prefer a slightly heavier round. These will do the job, though.

This isn’t the absolute least expensive ammunition. You can get .22LR ammo for a slightly lower cost per round. But you’ll usually have to compromise quality to get a better price.

The Federal American Eagle 38 GR Jacketed Hollow Point .22LR Ammo is great ammo to grab off the shelf when you need some cheap ammo to hit the range with. It comes in an affordably priced pack. And it’s good ammunition.

This ammunition is copper plated to minimize barrel wear and lead exposure. However, the copper jacket is pretty thin. But it still works.

However, you could use this ammunition for hunting, if you have nothing else. It’s reasonably heavy. And the hollow point should give you enough terminal ballistics for hunting small animals.

This Federal ammo uses the same brass and primers that you get in other Federal .22LR ammunition. So it feeds and fires reliably. It’s not perfect, simply because rimfire ammunition has its limitations.

However, it’s solid ammunition that’s reasonably priced. It’s a good grab-and-go ammo for those days when you need to get rounds on the way to the range. 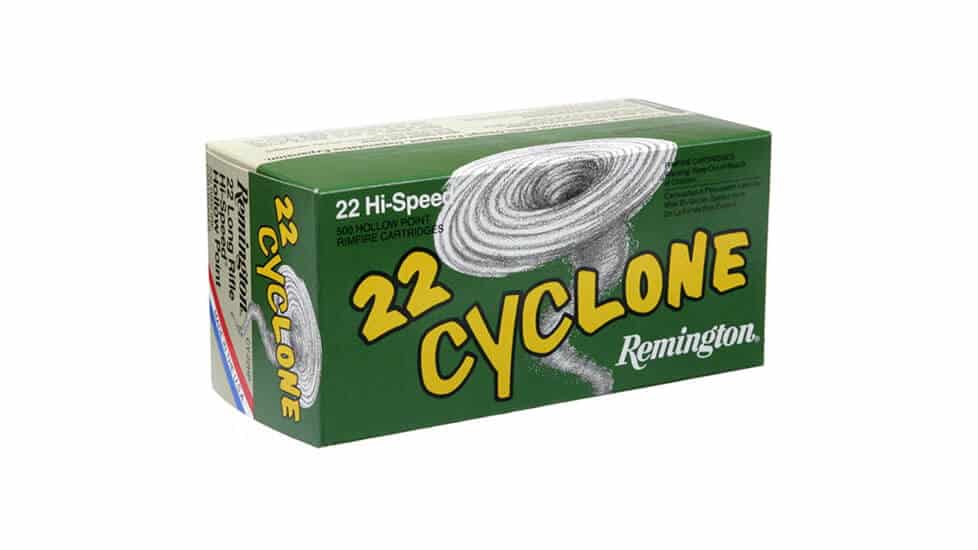 The Remington 22 Cyclone .22 Long Rifle 36 GR HP is some of the most affordable .22LR ammo, in terms of price-per-round. You can get this ammo for as little as 1 cent per round, if it’s on sale.

Now, there are some compromises that come with such low prices. This ammunition uses plain lead bullets. Lead bullets work just fine.

However, they do present a tad more barrel wear than plated bullets. Lead bullets also mean more lead exposure and a bit more fouling in your barrel. It’s not a huge deal. But you might need to clean your rifle a bit more when you shoot this ammunition.

The casings are brass, though. And this Remington ammunition has reliable primers. So it feeds and fires reliably, which is what you want from any ammunition.

Overall, if you want some really affordable ammo for a bit of plinking, this is the perfect ammo to get. 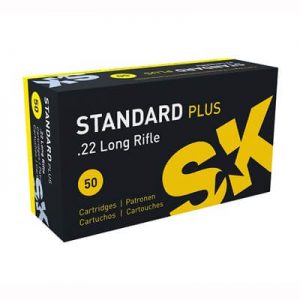 To be fair, the difference is minimal. You probably won’t notice unless you’re getting really serious about Ruger 10/22 precision.

But, this ammunition is also well manufactured with good primers. It feeds well and fires reliably. It’s about as reliable as rimfire ammunition can be.

This SK model isn’t exactly budget ammunition. It can run you about 14 cents per round. So it may not be the best choice for casual plinking.

But it’s solid ammunition. And you get a heavier round that works well if you have a Ruger 10/22 with a scope. 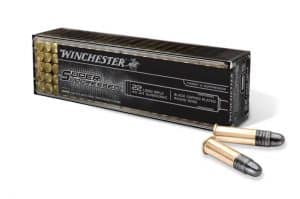 The Winchester Super Suppressed Rimfire Ammo is specifically designed to make your Ruger 10/22 as quiet as possible. That’s the main purpose of this ammunition. So it might seem a bit underwhelming for anything else.

First, the bullet is super heavy. This ammunition fires a 45 grain bullet. The heavier bullet keeps the projectile subsonic, to eliminate the sound barrier crack. This makes your Ruger 10/22 super quiet.

With a good suppressor, the Ruger 10/22 action is nearly as loud as the shot itself.

However, the bullets aren’t just heavy. They’re also copper plated. It’s black copper, which may or may not make a difference in performance. Either way, the copper plating reduces fouling and lead exposure.

Lastly, the bullets are standard round nose. So this Winchester ammunition feeds super reliably. But it’s not so great for hunting, even though the projectile is quite heavy.

Overall, this is excellent ammunition for a suppressed Ruger 10/22. And it’s not even that expensive. It’ll cost you about as much as any other decent 22LR ammunition, which is a nice finishing touch.

Learn more about subsonic ammunitions on this complete guide. 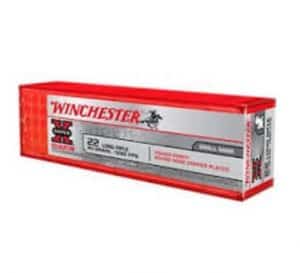 As you may have guessed, the Winchester Super-X Hyper Velocity Rimfire Ammo is designed to deliver maximum velocity. This comes with a few benefits besides speed.

To be specific, this ammunition pushes a .22 bullet to 1435 feet per second, which is pretty fast for .22LR.

That’s nice because it produces good terminal ballistics for hunting. However, it also gives you a flatter trajectory. And that means better precision.

Additionally, the bullet is a copper plated, 40 grain hollow point. It’s relatively heavy. And it expands. That’s why it makes good ammunition to keep with your hunting or survival rifle.

Lastly, this ammunition is built with Winchester brass and primers. It feeds and fires reliably.

One more thing: the bullets are copper plated. So this ammunition won’t foul or wear your barrel too badly.

And it’s not even that expensive. Just like the Winchester suppressor ammunition, this ammo costs about the same as some other .22LR ammo. You don’t have to dig too deep into your pocket to get good, high velocity ammo for your 10/22. 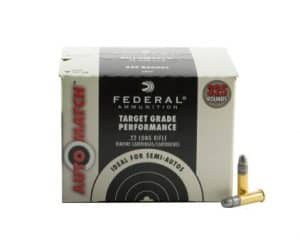 Check on Brownells
Other Options
p

The Federal 22 Long Rifle 40GR Solid Champion Automatch Ammunition is excellent ammunition for competitive shooters because it delivers solid performance. But it’s not too expensive, which is key when you need a lot of rounds for a competition.

First, this ammunition fires rounds at about 1200 feet per second. So the velocity is good. And the higher velocity gives you slightly flatter flightpath ballistics. This makes it easier to get accurate hits at long distances.

Additionally, the bullets are 40 grains. The rounds are heavy enough to minimize wind drift. So you have to do less guess work when you’re making your wind call.

Obviously, it’s still .22LR, not 6.5 Creedmoor. But this ammunition makes it about as easy as it can be to run competitions with a Ruger 10/22.

The casings are brass and the primers are just as good as the primers you get in any other Federal rimfire ammunition. So the feeding and firing is reliable.

However, the bullets are lead. No copper plating. This ammo will foul your barrel a bit more than copper plated ammunition. But they had to keep the price down, somehow.

Overall, though, this ammunition really hits the sweet spot between performance and price that you need from your comp ammo.

A Ruger 10/22 is a fun little rifle. And you can really customize a 10/22 to do just about whatever you want. So getting good, affordable ammunition is the way to go, since you’ll probably want to shoot a lot. Also try to assess your ruger rifle if it really fits you. Sometimes, a good chassis is something that fits perfectly on you when shooting. If you don't have one, better get one.

If you need a whole bunch of bullets for a decent price, pick up a Federal .22 LR Value Pack. It’s reliable ammunition that performs well. And it’s affordable. You can’t go wrong.

Time to get your Ruger 10/22 out for some exercise. Stop letting your rifle get fat in the closet. Get some Ruger 10/22 ammo. Then get out and shoot.

You can also check out these fantastic articles:

Ammo Basics: Parts of a Round

The Truth About Ball Ammo

Why is all Ammo Gone?

Is a Stell Cased Ammo Good or Bad

How to Buy Ammo in California