I’ve owned a lot of slings in my life. Over the past few years, though, I’ve kind of culled my collection down to a couple of slings. Of the slings I have left in my collection, my Vickers slings are some of my favorites. And the Blue Force Gear Vickers 221 Sling is probably my favorite Vickers sling (though I have other slings that I like as much as the 221 Sling).

“But the 221 Sling is one of the newest models!” you say. However, I had turned a couple of my standard Vickers slings into 221 Slings a while back with aftermarket adapters. 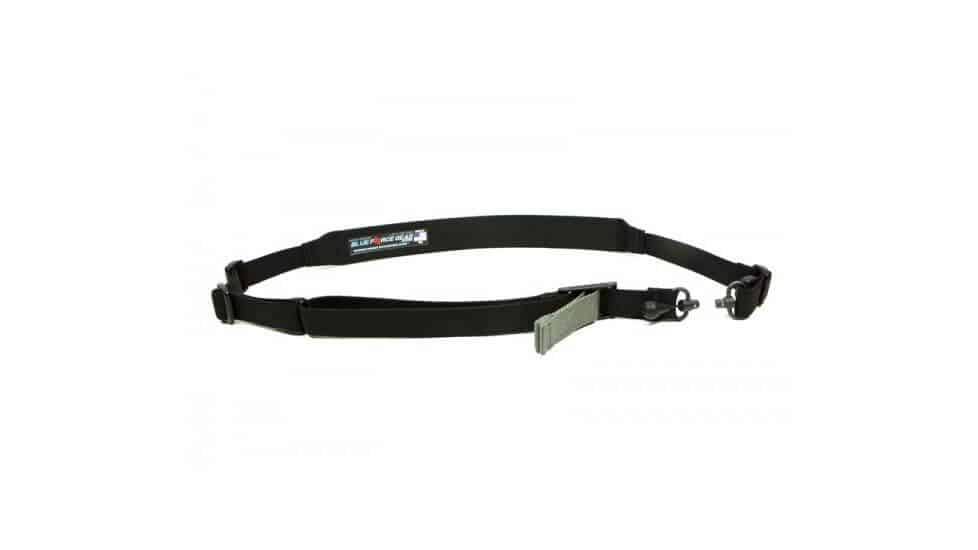 So the Vickers 221 Sling is really just a pre-packaged way for me to get my 2-in-1 sling. And I like ready-made solutions. That’s one of the reasons I like the 221 Sling.

But there are reasons I made my own 2-in-1 slings before. And the Vickers 221 Sling meets all of my demands for a 2-in-1 sling.

I’m a pretty big supporter of 2-point slings. But I understand that there’s a time and place for a 1-point sling.

That’s why I built slings that could be configured for 1-point or 2-point operation, even though I often run my sling in a 2-point configuration.

The 221 Sling does a good job of filling both roles, which is the whole point of this sling. But here’s a bit more evidence, in case you’re not convinced by my claim that this sling is cool.

Usually, this might not even be a thing to talk about. However, the sizing is probably my least favorite aspect of the 221 Sling.

First, this sling is huge. All the Vickers slings are huge, though. And I understand that they want to make sure that big people wearing a whole bunch of kit can get the sling large enough to accommodate all that muscle and gear.

But I am definitely not a big man. And I often shoot without any kit, because I’m not an operator. That means I have to size the sling down considerably.

Look at all that extra material.

I have to make the sling so small that the tail on the end of the sling that attaches to the rear end of my rifle is super long. There’s enough tail that I can run the tail through two triglides, then fold the tail over and run it back through the two triglides. It kind of makes the end closest to my shooting hand a bit bulky.

It’s not a huge deal. It doesn’t get in the way or anything. And I guess I could cut the extra webbing off. But I’m hesitant to cut my slings for some reason. What if I gain a ton of weight or something?

Either way, the initial sizing is the trickiest part because I had to deal with all the excess webbing. You may not have an issue if you’re a bigger person who wears a lot of kit.

The main reason I like the original Vickers slings is because the 2-point operation is really solid.

The pull tab adjustment works best in 2-point mode. Having the forward end attached closer to the front of the rifle tends to put more tension on the sling. So the adjustment triglide slides more easily when you adjust the sling.

Also, the adjustment triglide is very low profile. When I have the sling adjusted out far enough to make a hasty sling, the triglide doesn’t dig into my forearm. That was an issue with some other slings.

Lastly, I’ve never had an issue with the adjustment triglide slipping. I’ve never used this sling as an improvised tie-down or anything. So I guess I haven’t pulled on it too hard. But the triglide has never slipped in ordinary operation.

Spoiler alert: this is just a Vickers sling with a 2-to-1 QD socket. The Vickers sling is designed as a 2-point sling. So it makes sense that the 2-point operation is pretty good.

The adjustment triglide doesn’t slide as easily when you tighten the sling in a 1-point configuration, because there’s not as much tension on the sling to keep the webbing taught as you pull on the adjustment tab. 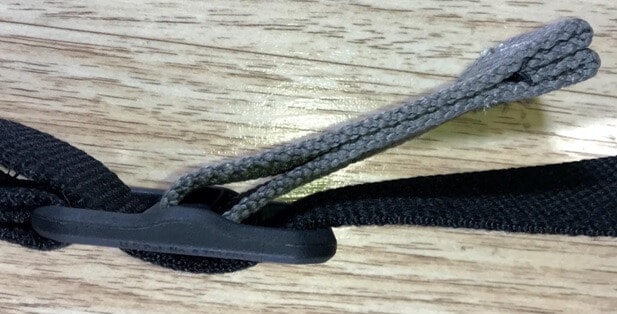 The adjustment tab is thick and easy to get a hold of.

That being said, I find that I have less need to adjust the sling when I’m using it as a 1-point sling. Once it’s set, I just leave it there until I need to take it off.

On the bright side, the sling loosens very easily in 1-point mode. So it’s pretty easy to loosen the sling and pop it off over your head.

My least favorite aspect of the 1-point configuration is the Burnsed Socket (the 2-to-1 QD socket).

Also, the Burnsed Socket slides very easily on the webbing. You have to use a triglide to keep it stationary. Otherwise it slides up and cinches the sling tight on your body. 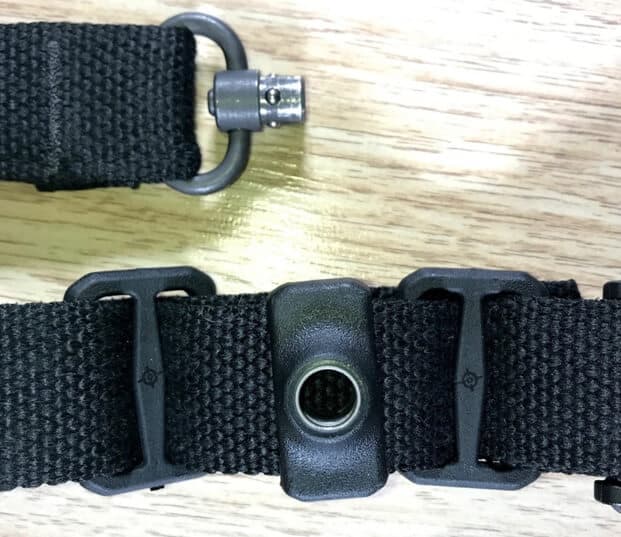 The Burnsed Socket sits on the flat of the webbing, rather than on the side.

That may be the intended design, because it keeps the sling tight to your body when your rifle is hanging on your sling.

However, I prefer a more secure 2-to-1 connection that places the QD socket on the side of the webbing, like the IWC 2-to-1 Triglide. That way the 2-to-1 attachment point stays where I put it. And it doesn’t cause a little knot of webbing at the connection point.

Now, don't get me wrong. The Vickers Burnsed Socket works well enough. I just think it could be more streamlined.

There is a benefit to the slightly less streamlined design, though. It’s easy to connect and disconnect the 2-to-1 QD sling swivel because the Burnsed Socket keeps the QD socket pointed outward.

All in all, the 1-point operation is pretty good. It’s not amazing, I’ll admit. And I’ll also admit that I will eventually replace the Vickers Burnsed sockets with IWC 2-to-1 triglides.

But I’m in no hurry, because the Blue Force Gear 221 Sling is good enough for government work in a 1-point configuration.

One of the standout features of the Vickers slings has always been the webbing.

Strap on the Vickers Sling

The 221 Sling can only be ordered with polymer hardware.

It’s not a huge issue. I’ve never broken the polymer hardware. The workaround is to just buy a Vickers sling with metal hardware, and order the Burnsed Socket separately. But that sort of defeats the purpose of a ready-made 2-to-1 sling. And you may as well just get the IWC 2-to-1 triglide, since you’re ordering all the parts separately, anyway.

All in all, the webbing is outstanding. And the polymer hardware won’t be an issue for most people. It’s just a bummer that you can’t get the 221 Sling with metal hardware right out of the box, just for the sake of convenience.

There are a lot of slings out there. And many of them are very good.

However, I’ve found that none of them are so good that they’ve been able to entice me away from my Vickers slings.

As for the Blue Force Gear Vickers 221 Sling, it’s still a Vickers sling with the added bonus of also being a 1-point sling. Essentially, it’s a 2-point sling that can pinch hit as a 1-point sling when you need it.

If you want a 1-point sling with 2-point capabilities, something like the Magpul MS4 QDM Sling might be a better option.