Recently, I was building an AR-15. And I was looking for a 14.5 inch barrel. As it turned out, barrels from my usual manufacturers were out of stock. I hadn’t used a barrel from Criterion Barrels yet.

Criterion Barrels had barrels in stock. So I picked one up to try it out. 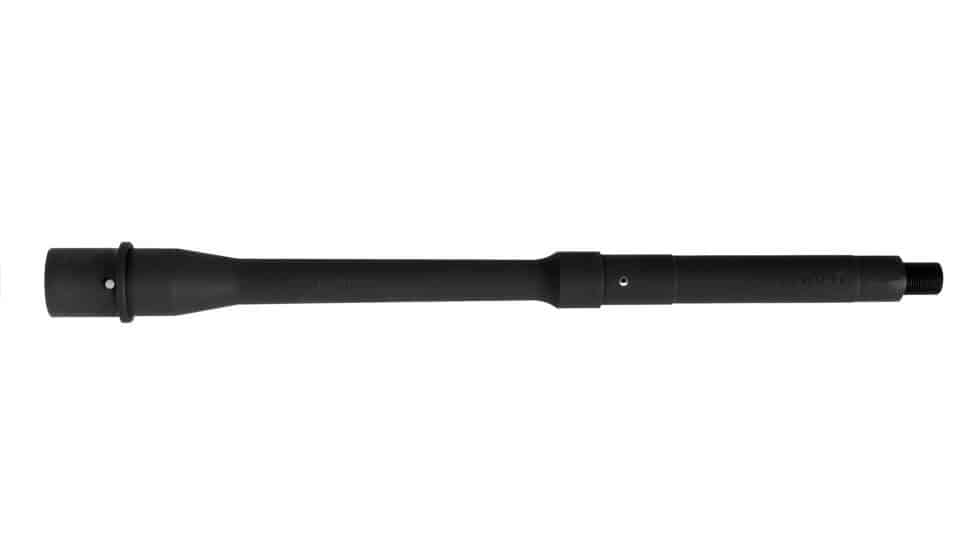 Fair or not, though, Criterion Barrels only sort of stand in the middle of the road, when it comes to price. The price definitely edges toward the more expensive side of the road.

But the price is non-negotiable, as far as I know. So I’m just here to tell you how good the Criterion Barrels Core Series Barrel is.

Also, let me just apologize for the terrible images. I hadn’t planned on writing this review when I put my rifle together. So I didn’t get any pictures of the barrel before I assembled the rifle and pinned and welded the muzzle device. That’s why all the pictures are of an assembled rifle.

Criterion Barrels Core Series Barrel: One Barrel to Rule Them All

The first things that some people noticed when they looked at this barrel were the finish and the bore lining.

This barrel is finished with a parkerized finish. And it has a chrome lined bore. Some people seemed disappointed in the mil-spec surface and bore lining.

And, yes, these barrels have something that resembles military specifications. If you’re a stickler for black nitride finishes or bores with surface conversion finishes, then maybe the Core Series barrels aren’t for you.

But I’ve been defending mil-spec finishes and chrome lined bores since the new finishes and bore linings came out. Okay, maybe not that long.

Regardless, parkerized finishes and chrome lined bores are fine. Most civilian shooters will never wear out an AR-15 barrel.

The parkerized finish was darker and more consistent than most budget barrels that come through the range. It’s pretty common to see parkerized finishes that have color inconsistencies when they come out of the box.

I’m not an expert in surface coatings. So I’m not sure if those color inconsistencies mean inconsistency in durability. But I prefer to see a more consistent finish, if only because it looks better.

Yes, the finish grayed out a bit once I started getting my barrel really hot. But that’s normal. I didn’t expect it to stay deep black forever.

See the gray barrel in there?

I’m a normal civilian. So I haven’t worn out this barrel.

However, the chrome lining covers the target crown. And—based on a visual inspection and shooting—the chrome lining is impressively smooth. If you shine a flashlight down the barrel, it’s easy to see the light reflecting inside the bore.

I’ve seen chrome linings that had a slightly more matte finish. And I suspect that causes the lining to wear faster. The chrome lining in the Core Series barrels is super smooth. It looks polished.

So I’m confident that this barrel will hold up for at least the average round count of an AR-15 barrel (about 20,000 rounds).

If you’re into black nitride or surface conversion finishes, no problem. But you’ll totally get your money’s worth from a well constructed and well-finished barrel like this one.

The contour is the most notable and non-standard feature about the Core Series barrel.

It’s a consistent contour that has no hard edges or strangely weighted areas. And the contour minimizes the weight near the muzzle.

This isn’t a pencil profile. So the weight is fairly standard. However, the profile is still on the lighter side. The 16 inch Core Series barrel weighs 1.70 pounds.

Long story short: the Core Series barrel is pretty lightweight, though still not quite as lightweight as a pencil barrel.

But there’s more to say about the contour.

First, the contour is shaped like a cone. There’s more metal near the chamber, where most of the heat and wear occur. And there’s less metal out near the muzzle, to reduce the swing weight and make it easier to run your rifle for extended training or long operations.

The contour also improves barrel harmonics to improve precision. I’ll get to precision shortly. But the contour delivers a strong balance of weight, durability, and precision.

If there’s a complaint to make about the profile, it’s the .625 gas block journal. Actually, this is just me whining.

Most government profile barrels have a .750 gas block journal. So, .750 gas blocks tend to be more common. I didn’t have any .625 gas blocks on hand. I had to purchase a new gas block to fit the barrel. Now I’m whining about it.

But, more seriously, I appreciate designs that take advantage of common specifications. It’s obviously not a big deal, and certainly not a deal breaker. However, .625 is a slightly less common gas block journal. And, if you’re like me, you may have to purchase a gas block with your Core Series barrel.

That probably won’t be a thing for long, though. Hybrid profiles like this one are becoming more common. Eventually, we’ll all have .625 gas blocks laying around for our builds.

First, the profile does indeed keep most of the weight close to the upper receiver.

It’s as easy as can be to maneuver and present the rifle I built with this barrel. I find it to be an easier handling rifle than the 14.5 government profile rifles I shoot.

I sort of expected that, though.

What I didn’t expect to notice is the heat resistance. I mostly run BCM KMR handguards. And, often have to wear a glove on my support hand. The barrel resonates enough heat that the handguard gets too hot to hold with a bare hand.

The Core Series barrel still gets hot enough to heat up your handguard, if you shoot enough. It just takes a little more time.

In addition to being able to shoot without a glove in moderate shooting sessions, this also helps make your barrel last longer.

The Core Series barrel heats up relatively slowly. And heating up slower will help ensure that your barrel lasts as long as possible.

I’ll keep this short: the fit and finish on this barrel is outstanding.

The M4 feed ramps are well polished. The chamber is super smooth. There are dimples for the gas block. And the barrel extension is super smooth and fits my Aero Precision M4E1 upper receiver perfectly.

There was no slop when I installed the barrel. And I only had to apply minor force to get the barrel to slide into the upper receiver.

But the thing I like most is the gas port.

I have the 14.5 inch model. So I probably won’t be running a suppressor on this barrel all the time. And I don’t stress too much about overgassing.

But I do shoot suppressed. And—as long as the gun works—I’d choose less gas in my face over more gas in my face (I’m left-handed. So gas from the ejection port pretty much goes straight into my mouth).

So, when we checked the gas port in the shop and found it to be .069, I was pretty happy about that. The usual gas port spec is 0.070, and that may be the spec that Criterion Barrels uses (a variance of .001 of an inch is fine).

It's hard to see the polish because my rifle is dirty. But it's there.

Regardless of the spec that Criterion Barrels is after, the gas port on this barrel is very well sized. It produces a super mild recoil impulse. And it runs great with a suppressor, without throwing too much gas in your face.

All in all, I’d give this barrel a 10 out of 10 in construction quality. It’s just an incredibly well-made component.

I’m not a big fan of talking about precision when it comes to firearms components and firearms.

The shooter is the least precise part of a gun. And there’s so much variation in ammunition and other components that it’s unlikely anyone would be able to exactly replicate my results with any barrel or gun.

This is mostly luck.

But I was able to shoot a pretty small group (about 1 inch, maybe a bit more) at 100 yards while I was zeroing my optic. That’s probably more indicative of my ability to shoot the rifle I built. However, it’s clear that the 6-groove rifling and polished chrome lining produce outstanding precision.

My only advice is to stick with ammunition that’s lighter than 70 grains. I did very little ammunition testing, because ammo is stupidly expensive right now.

The Core Series barrel may be different. But I have no evidence to prove that it is.

You’ll have to test to find out what type of ammunition performs best, because the other components in your rifle will have an effect on which type of ammunition it prefers. But, if you’re concerned with organic precision, the Core Series barrel is definitely more precise than any shooter.

In the end, I have almost nothing to complain about with this barrel. It actually exceeded my expectations.

There are less expensive barrels on the market.

But the barrel is arguably the most important component in your rifle. And the Criterion Core Series barrels perform well enough to more than justify the price. You can’t go wrong with this barrel.