Everything You Need to Know About Flying with Firearms

Flying can be a headache for the average traveler. Long lines, security checks, departure delays, and minimal legroom on modern airplanes are enough to make even the most optimistic traveler frumpy. Add traveling with a firearm to the mix, and you would expect the process to be absolute hell. 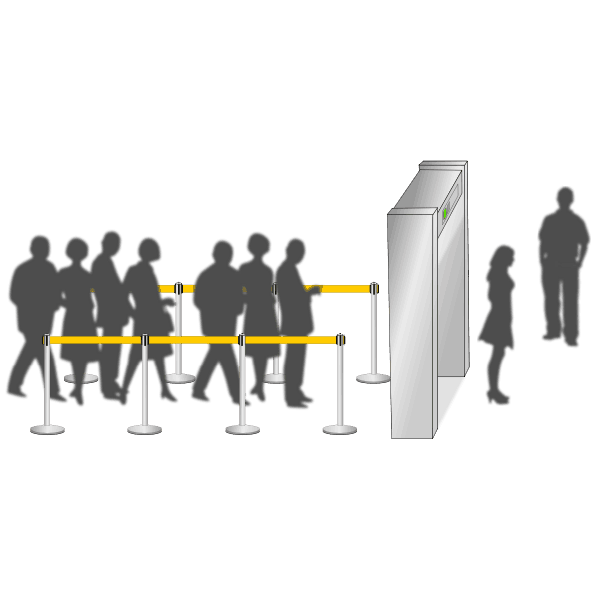 However, flying LEGALLY with a firearm is actually pretty simple.

At least if you know what you’re doing.

If it's your first time flying with a firearm, you’re probably worried about the process. After 9/11, airport security is no joke. You probably think taking a firearm on an airplane is completely impossible.

What if you knew exactly how to breeze through the process of traveling with your weapon?

In this article, I’m going to walk you through everything you need to know to make flying with firearms stress-free.

Well… almost stress-free. You’ll still have to go through that annoying TSA checkpoint.

Before you should even consider air travel with a firearm, you should understand the TSA rules and regulations for transporting guns and ammunition. Unlike most government regulations, they are surprisingly straightforward.

However, you may want to print them out and carrying them with you. TSA agents are responsible for knowing all the details of a pretty thick playbook. Firearms and ammunition is just one small part of what they have to remember. As much as we would like to believe otherwise, TSA agents are actual human beings. Cut them some slack if they make a mistake. .

Also, check the firearm policy of your specific airline. (You should find them on their website). Each airline has its own rules. For example, Delta Airlines requires firearms be stored in a manufacturer's container. This isn’t something you want to find out at the airport thirty minutes before your flight.

You might want to print these out, too. Ticketing agents are just as human as TSA agents.

In addition to TSA and airline rules, you also need to know what the firearms laws are wherever you’ll be landing. The agents at your departure point are only checking to make sure you comply with their rules. Even if you’ve crossed every “T” and dotted every “I” at the beginning of your journey, that doesn’t mean you won’t be in violation of local laws at your destination.

When traveling internationally, book a direct flight whenever possible. This will minimize the countries you pass through and help minimize the laws you could potentially break.

For international travel, you also need to fill out a US Customs Form 4457, a Certificate of Registration for Personal Effects Taken Abroad. This form must be signed by a United States Customs agent before you leave the country. If you fail to complete this step, you won’t be allowed to bring your firearm back into the U.S. 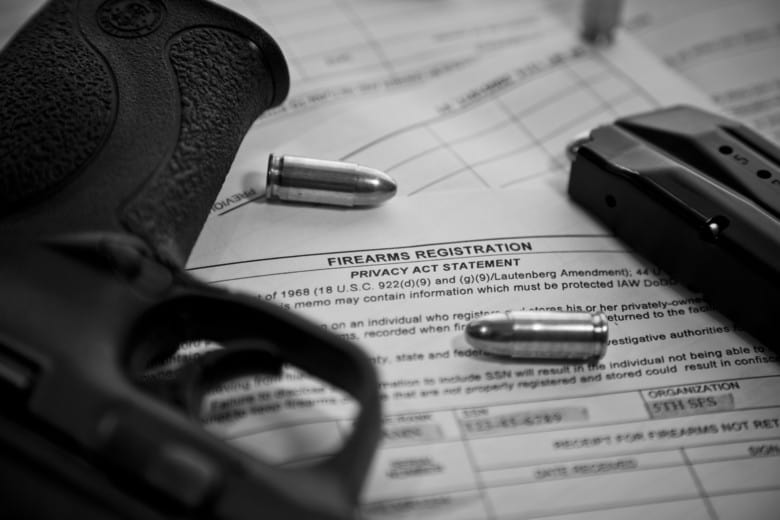 A Brief Note About New York

Although it is a lovely state, if you can avoid a layover in New York, DO IT.

However, New York has some pretty strict gun laws. The trouble comes if your flight is cancelled or delayed, which happens far too frequently. This situation could leave you toting your legally checked firearm to a New York hotel.

Voilà! You just hit the streets of New York with an illegal firearm! And if that doesn’t stir up trouble, checking that firearm at a New York airport on your way out of the state is going to be an absolute nightmare that could land you in jail.

If at all possible, avoid layovers in The Empire State. 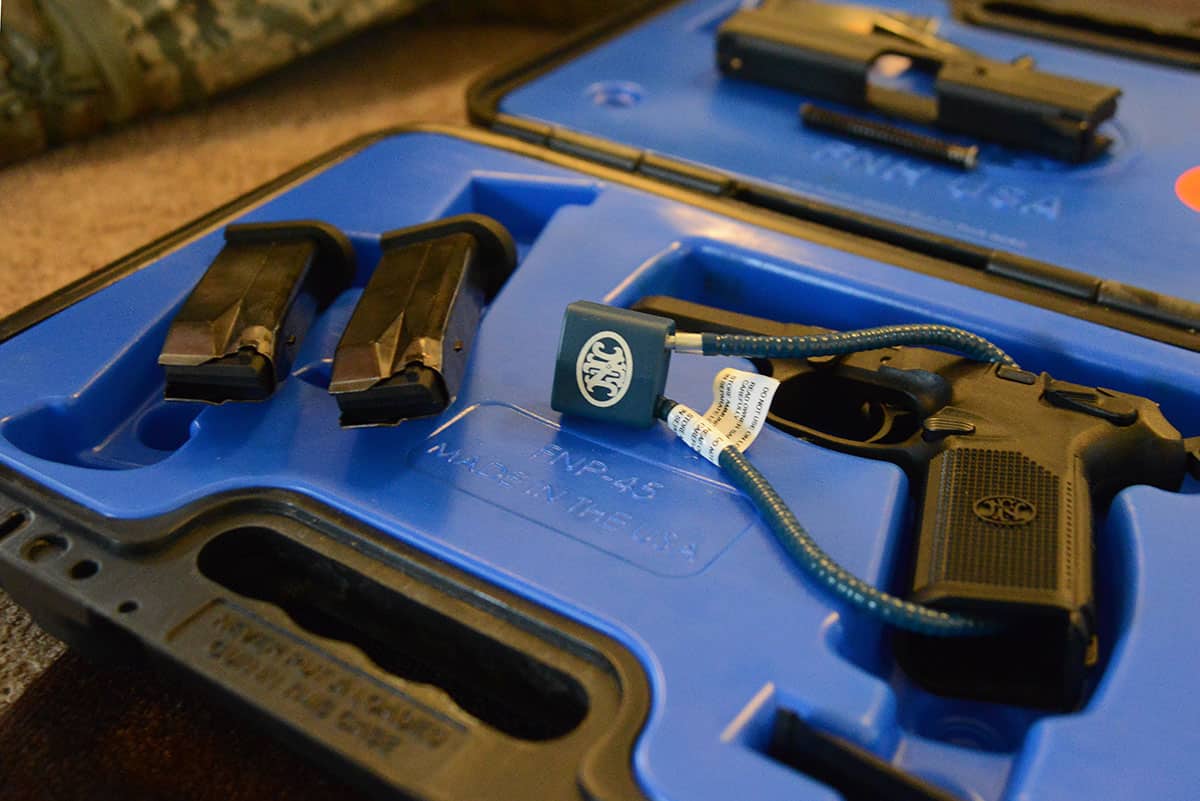 It should be common knowledge that you can’t pack your sidearm in your carryon. I mean, air travelers can’t even carry fingernail clippers! Those things are FAR too dangerous.

Pack your UNLOADED firearm in a locked, hard-sided case. If necessary, more than one firearm can be stored in each case. You can choose a case with integrated combination locks or one that has holes for heavy-duty padlocks.

DO NOT use TSA locks approved for regular luggage. Not only are these locks against regulations for firearms, ANYONE with a TSA master lock can open them.

Choose a case that’s well-cushioned and durable. That case is all that stands between your valuable firearm and rough housing baggage handlers.

You can place the locked case containing your firearm inside your checked luggage. Or you can check the case itself.

Be sure to keep the keys with you. You don’t want those keys in your checked baggage. TSA may require you to open the case for inspection.

Once you arrive at the airport, carry your LOCKED gun case inside to check in. Curbside check-in is not an option when traveling with a gun, because you need to declare your firearm.

Declaring a firearm isn’t any big deal, so there’s no need to break out in a cold sweat over it. (That will just make you look suspicious.) Walk calmly to the ticketing desk, and simply tell the agent you need to declare a firearm.

I promise the agent won’t look at you like you’re a serial killer. Plenty of people fly with firearms every single day. The person behind the counter has seen things far more unusual than your securely locked firearm.

You will receive an orange declaration card to fill out. Sign it to verify your weapon is properly stored.

After that, you’re usually good to go.

In some situations, the agent may ask to see your firearm.

If this happens, DON’T PANIC.

Open the case yourself. Never give your combination to the agent. If you give your key to the agent, he should return immediately after opening the case. The agent will then visually inspect and the contents of your container.

The agent SHOULD NOT handle your firearm.

If your weapon needs to be further inspected, the agent should contact law enforcement.

Every state, country, and some individual cities has its own gun laws. Ignorance of local gun control regulations will not keep you out of jail if you break them. Before flying with a firearm, be 100% sure that you can legally possess your firearm at your final destination.

Follow these guidelines and you’ll see that flying with a firearm is really no big deal.