FAB Defense is an interesting company. It seems to me that most of their products are designed to be more affordable, more comfortable, or more durable than the most popular products on the market.

My first impression of the Spike Precision Bipod is that it’s designed to be more durable and more stable than the reining polymer bipods, most notably the Magpul bipod. 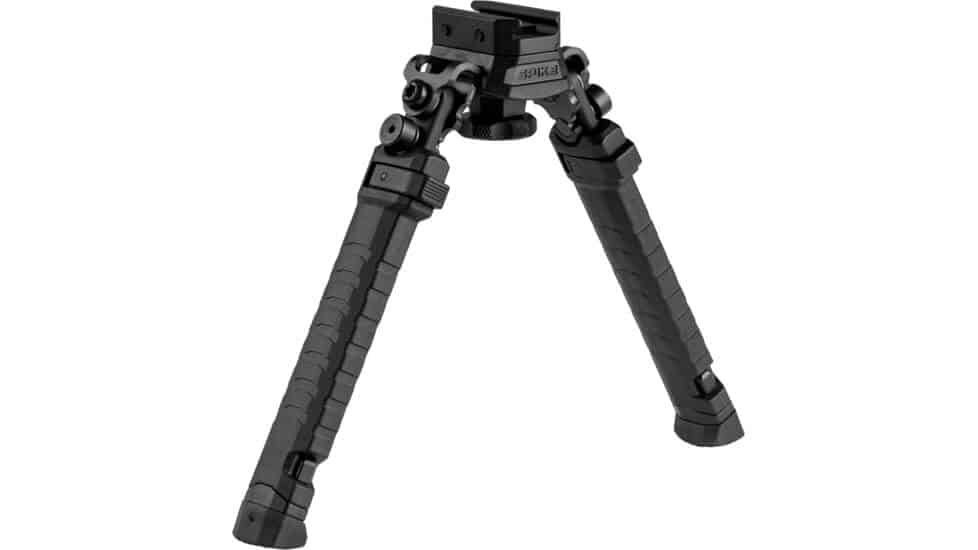 And the Spike does a thing or two that the Magpul bipod doesn’t.

However, the Spike costs a little bit more than the Magpul bipod. Which leaves one to wonder if the Spike is worth the extra dollars.

My sense is that the Spike more than justifies its price. I’ll explain why in the review.

I’ll mostly be comparing the Spike to the Magpul bipod, because that’s the competing polymer bipod that I’m most familiar with.

There are other polymer bipods. But the scope of my experience makes the Magpul bipod the best baseline for comparison.

Anyway, here’s why I think that the Spike is worth the money.

The second most important thing about bipods is ease of use. You often have to adjust or open your bipod from behind your rifle, which means you have to reach to get to your bipod. This can be really frustrating if your bipod isn’t really easy to use.

Then there’s adjustability. The most adjustable your bipod is, the more it will help you in a variety of shooting positions.

I’ve divided up my assessment of the Spike based on these three aspects:

I’ll get durability out of the way first, then move on to the other elements.

I’ve only used the Spike for a handful of weeks. So I can’t really speak to the long term durability.

Here’s why the Spike seems like a durable piece of gear.

First, the metal frame is incredibly thick. I didn’t take a micrometer to it. But the metal pieces seem slightly thicker than the metal parts on the Magpul bipod.

The rubber feet may have had something to do with that. But the legs never splayed out under the weight of the rifle, even though we mounted all sorts of stupid stuff on it to make it super heavy.

Also, most of this bipod is made of metal. Really, only the outer portion of the legs is polymer. So this is essentially a metal bipod. Also, there are no components that seem prone to breakage.

For example, the mechanism that enables the bipod to tilt is a thick steel plate, and the panning pin slides in a channel to tilt the rifle. To my mind, it seems more robust than a hinge or a pin. 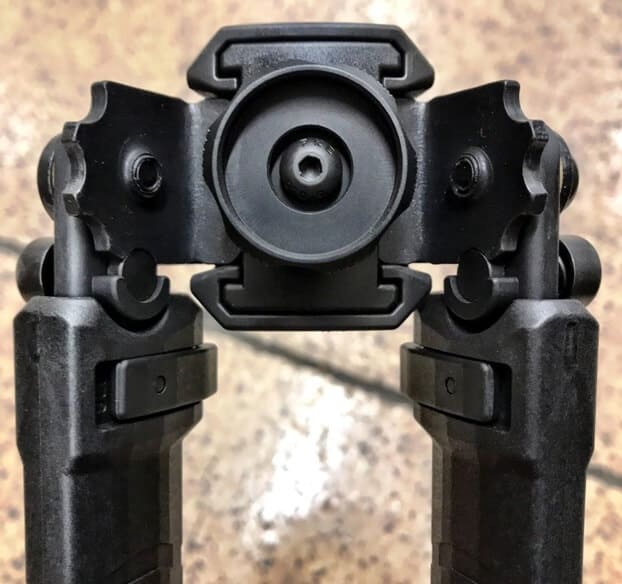 The polymer legs on the Spike are super hard and rigid. It’s very dense. And the polymer doesn’t flex or distort at all. I was very impressed by the quality of the polymer. One of the guys in the shop initially thought it was some sort of metal.

Lastly, there are only a few springs in this bipod. The buttons to collapse the legs are obviously spring loaded. And the panning mechanism is spring loaded.

Springs are a wear part and will eventually fail. And it seems that FAB Defense only used springs where they were necessary to keep the number of parts that might eventually wear out to a minimum.

The only other area that might be a weak point in terms of durability is the locking mechanism that sets the leg angles.

However, the bipod would still be totally usable.

Overall, the durability seems solid. And I would say the Spike seems more durable than the competing polymer bipods.

I already mentioned that the Spike pans and tilts. But the Spike has a lot more adjustability, beyond panning and tilting.

Obviously, the leg length is adjustable. However, this bipod comes with two inserts that enable you to add about 3 inches to the legs, in case you need a bit more height than the stock leg length offers.

But the thing that really impressed me about the Spike was that the legs lock in four positions.

There’s the stowed position and the standard vertical position. Then there are two 45 degree positions—one forward and one backward—which you might not use all that often.

But these positions are super handy if you need to brace your rifle angled downward from a standing position or if you need to stabilize the rifle at an upward angle.

This is a fairly unique feature in the polymer bipod market. There just aren’t a lot of polymer bipods that have multiple leg positions.

All in all, the Spike gets high marks for adjustability.

However, what you can adjust on the bipod isn’t quite as important as how easy it is to adjust the bipod. If the bipod isn’t easy to adjust, you’re going to have a bad time if you need to make changes to your bipod once you’re laying down behind your rifle. 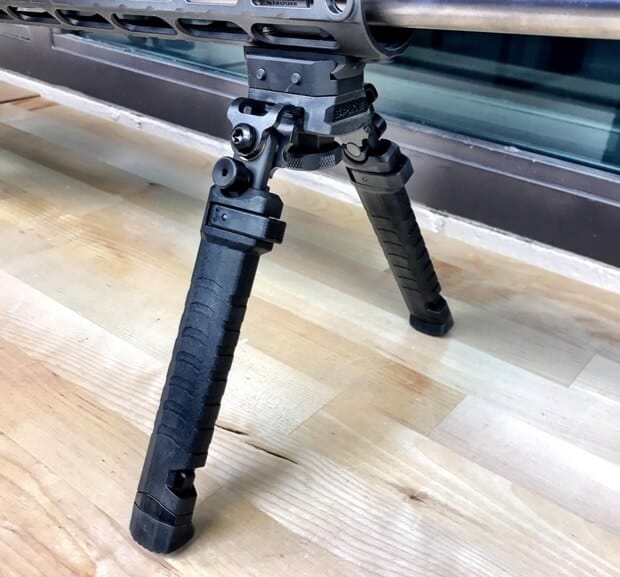 That’s where I thought the Spike performed very well.

If you need to extend the legs, you can simply pull them down. You only need to press the button to release them if you need to collapse the legs again.

My only complaint about the leg lock buttons is that the button faces forward, away from the shooter, if you have the bipod mounted so the legs collapse toward the muzzle.

I think it would be a better design if the button faced toward the shooter, that way it would be easier to shorten the legs from a shooting position.

But it’s still relatively easy to collapse the legs from behind your rifle, if you need to.

However, the panning and tilting mechanism locks and unlocks easily. That way you can set the pan and tilt, then lock the bipod.

You may find the panning and tilting mechanism to be a little bit stiff. I thought that was more of a feature than a bug, though.

I found that I could simply leave the panning and tilting mechanism unlocked. And it was tight enough that the rifle wouldn’t move much—if at all—when I fired. 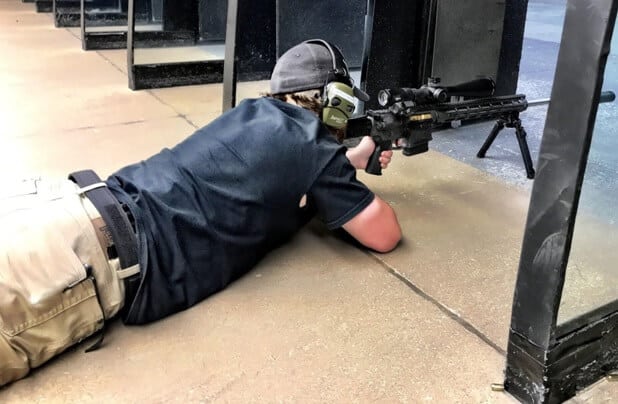 Obviously, there are times when locking down your bipod is the best answer. But, if you need to leave the bipod unlocked for the purpose of scanning for additional targets or quickly transitioning between known targets, this bipod offers a lot of stability in the unlocked position.

Also, the feet are super easy to remove and replace, if you need to.

Since I’m talking about the feet, I’ll give my take on the feet: they’re great for typical urban surfaces (concrete, pavement, etc.).

However, they’re not as great in more natural environments. 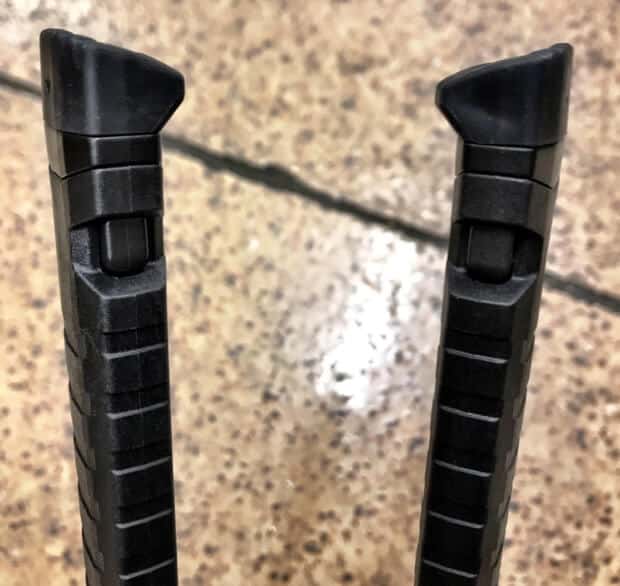 But the rubber feet are decent all-purpose feet. I just hope that FAB Defense produces some other options for shooters who need better feet for shooting out in the woods, because this bipod is good enough to use in all types of environments.

They work. But other manufacturers offer spiked feet and other designs for a reason.

The rubber feet simply don’t offer as much stability on softer surfaces like sand or leaf litter.

Last point: it’s a small thing. But I appreciate that this bipod attaches to a picatinny rail. It might not be as convenient for traditional hunting rifles. But I find picatinny to be the most versatile mounting system for a bipod.

Yes, M-LOK is fairly ubiquitous. But I find picatinny to be more universal for bipods. Obviously, your mileage may vary. I like the picatinny mount, though. 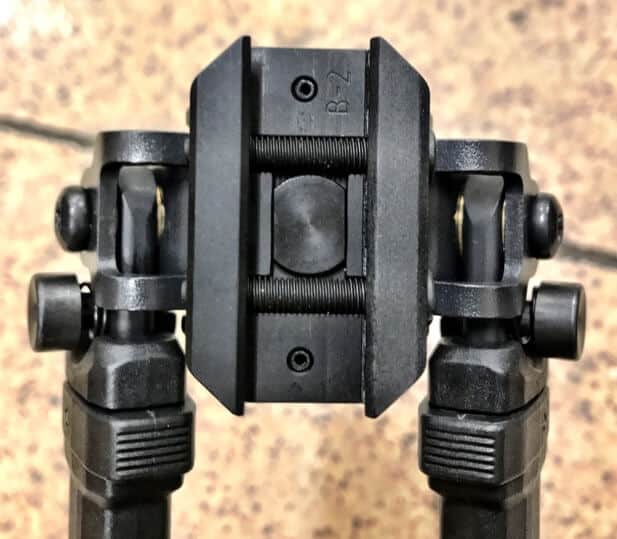 My biggest question about this bipod when I unboxed it was, “Is this thing worth the slightly higher price?”

I think that the Spike will be worth the price for most shooters.

It’s not the ideal bipod if you simply want the cheapest bipod that will hold your rifle up on the bench.

However, if you need a bipod that you’d like to mount on a nice rifle, that you’re going to use for hunting or shooting in varied environments, the FAB Defense Spike Precision Bipod is an excellent option.

Even though it’s not exactly a budget bipod, the Spike is still less expensive than some of the high-end bipods on the market. And it’s just as adjustable and easy to use as a more expensive bipod.

The only real compromise is the polymer legs. And they seem more than durable enough for any type of shooting.

So, ultimately, yes the Spike is worth the money. It’s a legitimate upgrade over other polymer bipods. It’s a solid piece of gear that’s good enough for any rifle, for any type of shooting.