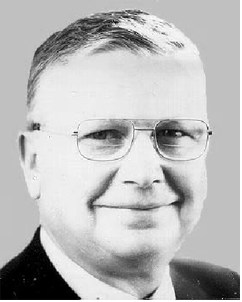 Although the name may not be immediately recognizable to the average person, his most famous invention, the AR-15, is one of the most well-known firearms in modern history.

Who was Eugene Stoner? Where did he come from? What were his many inventions?

Learn about America’s last legendary weapons designer, his legacy on firearms history, and how his AR-15 became one of the most widespread self-loading rifles worldwide.

Eugene Stoner was born to a middle-class family in the tiny town of Gosport, Indiana, on November 22, 1922. After graduating from high school, Stoner worked for the Vega Aircraft Corporation, a precursor company to Lockheed-Martin, installing armaments on warplanes.

During World War II, Stoner enlisted in the U.S. Marine Corps as an aircraft ordnance technician (MOS 6531), serving between 1942 and 1945 in the Pacific theater as a military armorer, forming the basis of his career as a firearm designer.

Career as a Firearms Designer 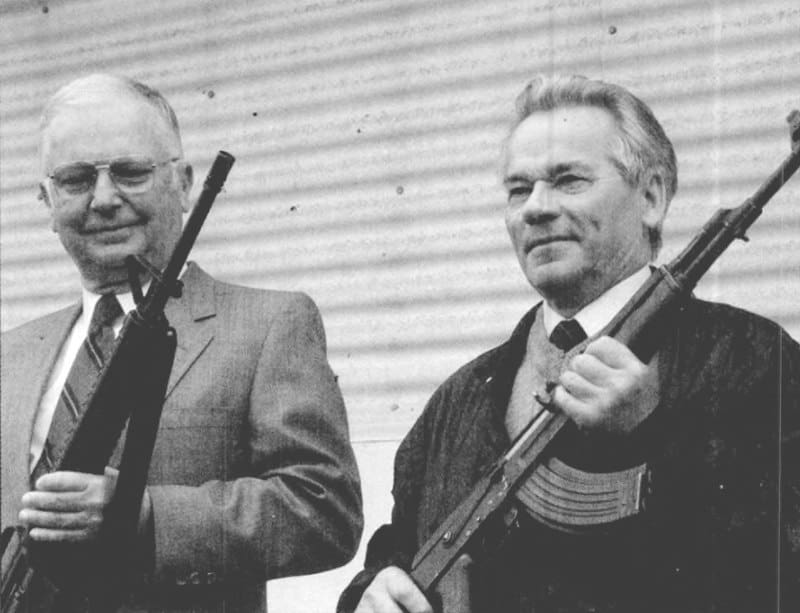 After the war, Stoner returned to civilian life as an aircraft machine shop worker for the Whittaker Corporation, eventually rising through the ranks and becoming an aircraft design engineer. In 1954, he was hired by ArmaLite, a division of the Fairchild Airplane Corporation, as a chief engineer.

At ArmaLite, the Indiana native designed his first firearm designs. Most remained prototypes, but three specific firearms found success: the AR-5 and AR-7 survival rifles and the AR-10.

One of the first Stoner small arms designs to see adoption by the U.S. military is the ArmaLite AR-5, a bolt-action survival rifle designed in 1955, chambered in .22 Hornet and intended for use by aircrews as a survival rifle.

The AR-5 featured a hollow fiberglass stock, allowing the user to separate the barrel and store it inside the buttstock for transportation, making it very compact. This rifle was so light; if one were to drop it in water, it would float.

Although the AR-5 was adopted in 1957 by the U.S. Air Force as the MA-1, it was unsuccessful. The USAF already possessed large quantities of M4 and M6 survival rifles, seeing little need to replace their existing stocks with the AR-5/MA-1.

Stoner improved his work in 1959, introducing the ArmaLite AR-7 Explorer, a semi-automatic derivative of the earlier AR-5. The AR-7 employed a straight blowback action, chambered in .22 Long Rifle, and featuring an 8-round magazine.

The AR-7 proved highly popular in the civilian market, with production continuing until 1973, after which the manufacturing rights went to other companies. Today, the AR-7 is still in production, currently made by the Henry Repeating Arms Company since 1997.

One of Eugene Stoner’s most significant firearm designs is undoubtedly the ArmaLite AR-10, a select-fire 7.62x51mm NATO rifle featuring a 20-round magazine and a direct-impingement gas system. Stoner produced the first working prototypes in 1955, and full production began in 1956.

At the time, the U.S. Army was testing potential replacements for the M1 Garand rifle. The two main competitors, Springfield Armory and FN Herstal had submitted three rifles in total: the Springfield T44E4 and T44E5 (updated versions of the M1 Garand), and the FN FAL, known during the trials as the T48.

The AR-10 garnered many positive comments: it was remarkably lightweight (under 7 lbs empty), considered “the best lightweight automatic rifle ever tested” by Springfield Armory.

Unfortunately, an incident led to ArmaLite president George Sullivan presenting an unproven prototype to the military testers, despite Stoner’s objections. The prototype featured a composite aluminum/steel barrel instead of a traditional steel barrel.

During a torture test in 1957, the rifle’s barrel burst, eliminating ArmaLite’s chances of winning the competition. In turn, the U.S. Army selected the T44 instead, adopting it in 1959 as the well-known M14 rifle. 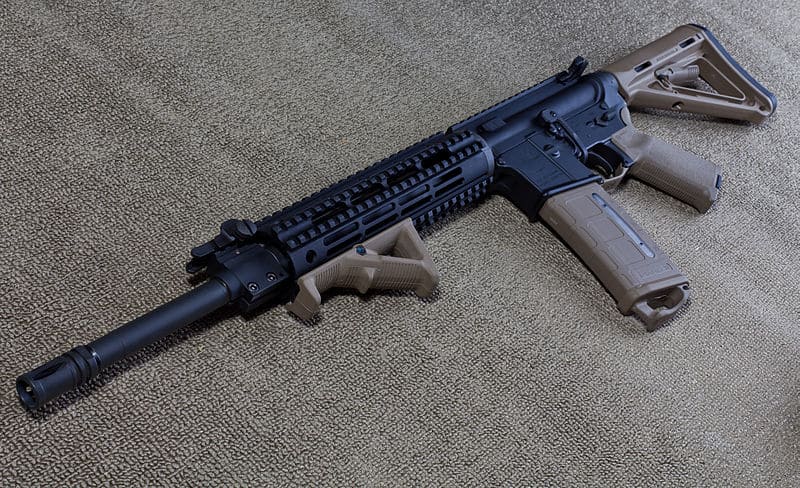 During the Vietnam War, the M14 initially favored by the U.S. Army fared remarkably poorly. The M14 was nearly impossible to shoot accurately in full-auto, and it was heavy and unwieldy for a jungle environment. The wooden stock also tended to warp and crack in the hot and humid Vietnamese weather.

It became clear that the U.S. Army needed a lightweight, controllable rifle.

At the U.S. military’s behest, Eugene Stoner, his assistant Robert Fremont, and fellow firearms designer Jim Sullivan got to work. The three men produced the AR-15, a scaled-down version of the AR-10 chambered in .223 Remington.

Extensively tested between 1962 and 1963, military testing personnel praised the AR-15’s lightweight construction, lethality, and reliability. The U.S. Air Force eventually adopted it in 1963, designating it as the M16 rifle.

By 1965, the Vietnam War was at its most intense. Secretary of Defense Robert McNamara insisted that all four branches of the U.S. military needed a single unified service rifle and that the M16 would fill this role.

At this point, ArmaLite sold the production rights to Colt, which became the primary manufacturer of M16 rifles. Despite the initial praise, poor cost-saving decisions tarnished the rifle’s reputation.

Colt did not supply cleaning kits with the M16, spreading the belief that the rifle was “self-cleaning.” Also, the U.S. Army switched to a dirtier, less reliable gunpowder for their 5.56mm ammunition than what Stoner recommended.

These decisions dramatically impacted the M16’s reliability, resulting in thousands of soldiers dying, many with half-disassembled rifles in their hands, desperately trying to clear jams and malfunctions.

Despite its rocky beginnings, the rifle remained in service with the U.S. military, gradually receiving various improvements and modernizations.

Today, the AR-15 and its derivatives became Eugene Stoner’s most successful and most-widely produced design.

With an estimated 13 to 18 million rifles manufactured across all sectors (military and civilian), the AR-15 rifle became the second most widely produced self-loading rifle design globally, far behind the AK family (150 million).

Despite the Cold War-era rivalry between their respective countries, Eugene Stoner and Mikhail Kalashnikov respected each other as gun designers, each recognizing the importance of the other’s designs.

Derivatives of the AR-15 are still in service in the United States today, despite many attempts at replacing the rifle. It became the longest-serving service rifle in the U.S. military’s history and the most popular centerfire rifle design on the U.S. civilian market.

In 1963, Stoner and other ArmaLite engineers designed the AR-18, a low-cost alternative to the AR-15. The AR-18 action is at the core of numerous modern rifles, from the British SA80 to the German G36 rifle platform.

Stoner eventually left ArmaLite in 1961, becoming a consultant for Colt for a few years, before accepting a position as a weapons designer for Cadillac Gage in 1963.

While at Cadillac Gage, Stoner produced the Stoner 63 modular weapons system, a configurable platform capable of being a fighting rifle, a light machine gun, or a mounted machine gun. 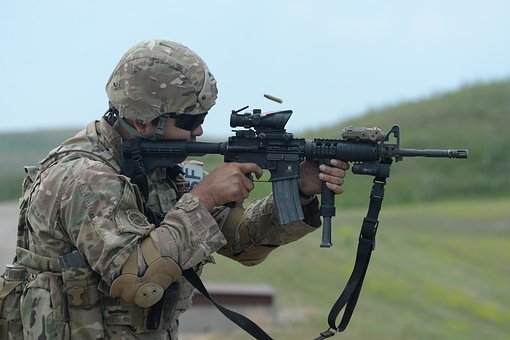 Although Eugene Stoner passed away on April 24, 1997, his impact on firearms technology helped redefine the ideal infantry rifle.

The AR-10 and the AR-15 were the driving force behind the modernization of firearm manufacturing techniques, transitioning from old-fashioned wood and steel to aircraft-grade aluminum, fiberglass, and plastics.

The Man Who Made Glock Pistols (Read Article)