Is the Hexmag Series 2 Polymer Magazine Any Good? 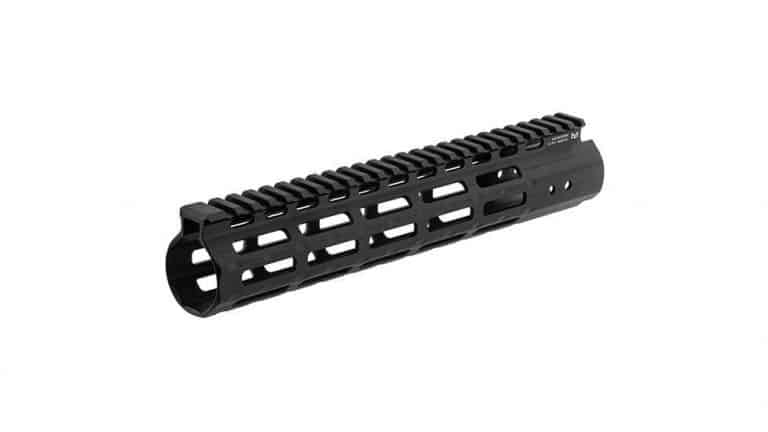 I’m a long time fan of the Bravo Company and SLR Rifleworks handguards. However, I’m not indifferent to prices. And both the BCM and SLR rails are pretty expensive (the SLR rails probably qualify as REALLY expensive). When UTG Leapers released their UTG Pro Super Slim Handguard (they also have 13 and 15 inch variants), I was intrigued.

The UTG rail is significantly less expensive than my usual handguards. But it’s not so cheap that it makes me wonder which corners they cut to get the price down. The price is affordable and reasonable.

However, I wanted to test the rail out before I recommended it to anyone. Back in the day, UTG Leapers was known for producing low grade components that many people regarded as only being good enough for airsoft.

More recently, though, Leapers has stepped up their game with the UTG Pro line of products. The most notable improvement is that all the UTG Pro gear is made in the USA. I’m not mad about that. And, at the very least, that should result in better quality control.

So I picked up a 10 inch UTG Pro Super Slim Handguard to try out on my 11.5 carbine. Here’s how things went.

As a note, I neglected to take any pictures before the handguard was installed. So you’ll have to take my word that there’s a barrel nut and locking ring inside the handguard. And that those parts are indeed black.

Other than that, everything should be visible from the outside.

Also, I have the KeyMod version. The M-LOK version is identical, except it has M-LOK slots instead of keyholes.

Let’s get on with it, then.

Naturally, I did an initial inspection when I first pulled the handguard out of the box. This is just my standard operating procedure.

Mostly, I’m checking for obvious defects that might give me problems. But I also like to see if there are less obvious things that won’t affect function, but that might indicate production issues.

My initial inspection didn’t reveal any rough machining or sharp edges. There are no chatter marks inside the handguard. And all the KeyMod slots are within spec.

Also, the finish is solid. It’s not quite as smooth as the SLR Rifleworks anodized finish. But it’s definitely comparable to the finish on a BCM rail. 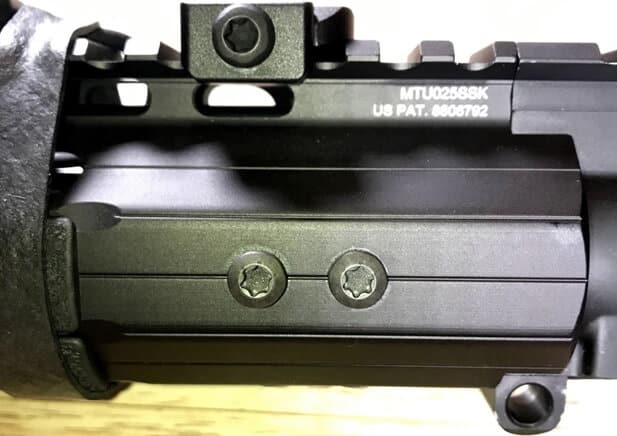 It's hard to tell, but those screws have a super matte finish.

My only complaint about the mounting hardware is that the locking screws have a super chalky, matte finish. It looks like the phosphate finish you’d find on an old Colt bolt carrier group.

Obviously, this is a super minor issue. But I think the overall aesthetic would be better if the locking screws had a smoother finish.

All in all, though, everything looked great out of the box.

The barrel nut and locking mechanism are pretty well designed. It’s not quite as stupid proof as the BCM or SLR Rifleworks mounting system. But the installation is pretty simple, all things considered.

Overall, the fit is super solid. It takes a bit of force to slide the handguard over the barrel nut because the fit is nice and snug, which is the way it should be. And, the locking screws produce a super tight lockup once the installation is complete.

But there were a couple of hiccups during the installation that I should warn you about.

It just so happened that, once I had the barrel nut torqued to 45 or so pounds, one of those little connecting points was right where I needed the locking screw to go. I ended up having to torque the barrel nut down to between 65 and 70 pounds to get everything to line up.

The barrel nut torque spec is from 40 to 80 pounds. Nothing needed to be out of spec. And there’s no guarantee that you’ll have the same issue. But it’s something to be aware of.

However, there was another thing that I found to be more concerning. The anti-rotation tabs are huge, which is nice. But they’re about a half a millimeter wider than the body of my upper receiver.

The good news is that the locking screws hold the handguard in place really well. I put the upper receiver in my vice and tried to turn the handguard, just to see how secure it was. And I couldn’t get it to move. 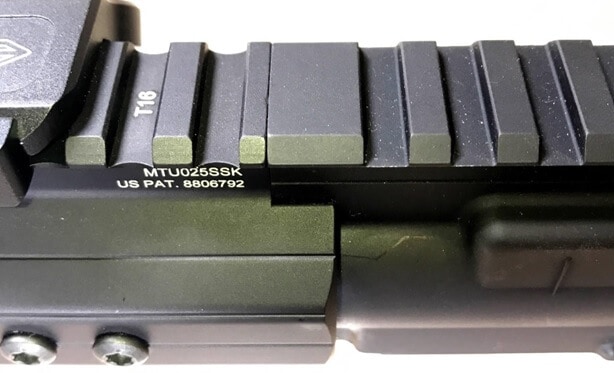 Might be hard to see. But there's a tiny gap between that anti-rotation tab and the upper receiver.

It might have moved if I’d used a tool. But I didn’t want to beat up the handguard. And, if you use the right tool, you could probably get any handguard to turn. The locking mechanism definitely does its job.

Small hiccups aside, the installation is simple. And the mounting design is super secure. Just be ready to get the big breaker bar out if you need to crank down on the barrel nut.

The build quality and installation matter. But, in theory, you’ll only install your handguard once. The performance is really what matters.

First, the super slim design is super comfortable. I use a thumb-over grip. And this handguard is perfect for that sort of grip technique. Though, it’s also great for a thumb-forward grip.

Also, I really appreciate the rounded corners and scalloping between the KeyMod slots. Even though this isn’t a round handguard, it kind of feels like a round handguard because there are no harsh edges. 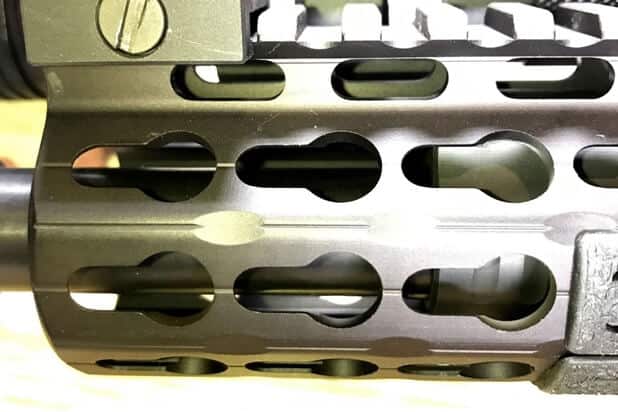 Check out that scalloping and those rounded edges. Nice attention to detail.

I installed some Bravo Company KeyMod rail covers. And holy smokes, the fit is tight. It took a thousand times more force to get the BCM rail covers to click into the slots on the UTG rail than it did on my BCM KMR.

That’s a small inconvenience, though. The good thing about the tight KeyMod tolerance is that it’s better for mounting things like lasers, since there’s less room for deviation in the mounting slots.

If you get the M-LOK version, you won’t have any of this variance. M-LOK is a proprietary mounting system with a very specific set of specs. KeyMod is an open source mounting system, which is probably why you see that tiny variation in fit.

The last thing I appreciate about the mounting system on this handguard is that there are KeyMod slots at the diagonal positions. I haven’t had to use them yet. But I prefer having mounting slots instead of just lightening cuts. It’s more utilitarian. And I like utility.

Overall, the ergonomics and mounting capabilities are excellent. There were never any fit issues with the various accessories I added. And the mounting system hasn’t loosened or anything.

If I had one complaint, it would be that there’s no QD sling sockets anywhere on this rail. I understand that adding a QD mount would probably make this rail more expensive. But an integrated sling socket would be pretty cool.

There are plenty of solutions for adding a sling socket to your rail, though. So that’s a minor complaint.

One last thing: this rail is impressively lightweight. UTG says the 10 inch model weighs 6.2 ounces (the same as the BCM KMR 10). I suspect that’s just the rail, without the mounting hardware.

Tiny weight savings from those cutouts on the picatinny rail.

However, the UTG Leapers Pro handguard feels like it has slightly less swing weight than the BCM KMR. But that’s a really unscientific measure. The bottom line is that the UTG Pro handguard is light enough to keep your rifle from being unwieldy, even if you add a bunch of stuff to it.

All in all, the Super Slim handguard put on a strong showing, in terms of performance. I was pretty impressed.

Ultimately, I’m not sure if the UTG Pro Super Slim Handguard will become one of my go-to handguards.

But it’s a really solid handguard that you can get for a super reasonable price. If your budget demands that you prioritize value, this handguard might be the best value handguard you can get, right now.

Also, I’d say the UTG Pro handguard is definitely an affordable and worthwhile upgrade over some obsolete handguards.

If you have an old Midwest Industries rail with the original friction fit locking system or a Noveske handguard that relies on the barrel nut for timing and anti-rotation, the Super Slim handguard is absolutely a better option, as far as I’m concerned.

On the other hand, I don’t think there’s any reason to switch to the Super Slim handguard if you already have something like a BCM rail or even an Aero Precision handguard.

But I’m impressed with UTG Leapers work on this handguard. And it’s definitely a legitimate piece of gear. If you need a rail, it’s definitely worth considering the Super Slim handguard, even if your budget allows for something more expensive.