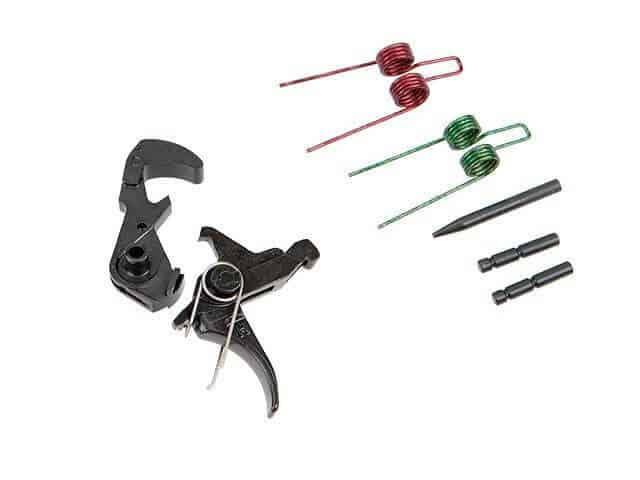 I’m not much of a trigger snob. As long as the trigger makes the gun shoot when I press it, I’m largely indifferent to the trigger press. That’s why I used plain mil-spec triggers for a long time.

Admittedly, the Hiperfire Heavy Gunner probably won’t become your new favorite trigger if you’re a dedicated Geissele trigger puller. I’ll save you some time and say stick with the Geissele if that’s your standard for triggers.

On the other hand, if your demands are a bit more relaxed, then the EDT Heavy Gunner might be for you.

Here’s what I know about the Heavy Gunner from shooting it a lot.

I’ve put some number of thousand rounds through rifles fitted with the EDT Heavy Gunner trigger.

I’ve found several reasons to recommend this trigger. I’ve also found a reason or two that you may not like this trigger. And I’ll try to help you sort out whether or not this could be your go-to trigger from now on.

One of the big reasons I stick with mil-spec triggers is reliability. We know the mil-spec design is reliable, based on all the empirical evidence we have from military rifles. And I don’t have to worry about using anti-walk pins or any of that. 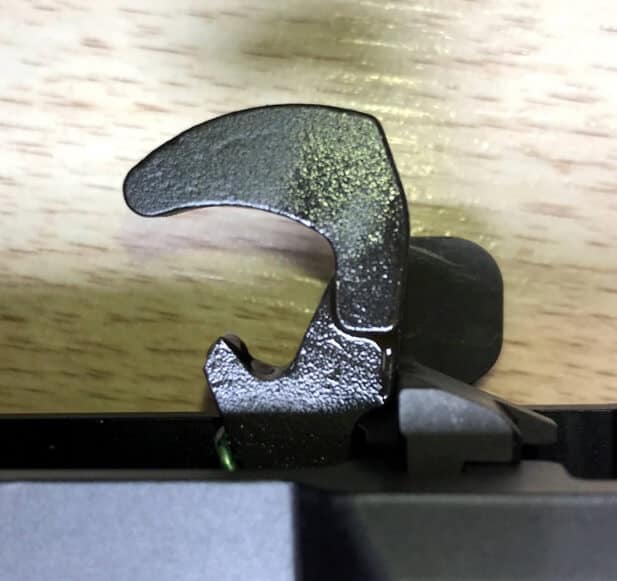 Even the hammer looks suspiciously like a mil-spec hammer.

A mil-spec trigger is just the simplest solution for making sure my rifle shoots every time I press the trigger.

Side note: I know that good triggers from brands like Geissele are also perfectly reliable. But they’re more than twice as expensive as a Hiperfire trigger. If the Heavy Gunner runs reliably, it’s a more efficient solution. 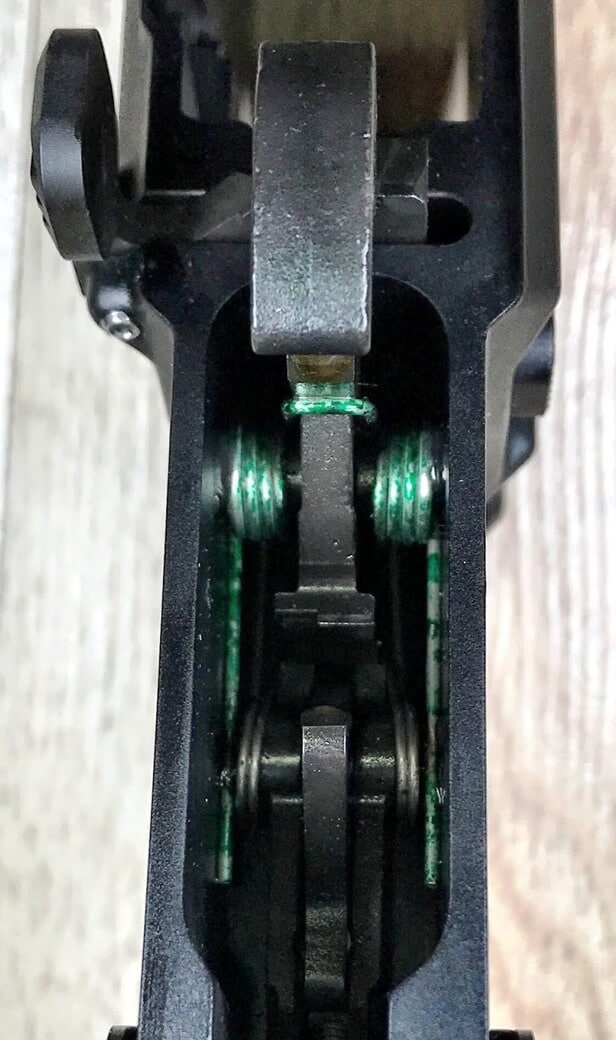 As I expected, the Heavy Gunner has worked flawlessly. No light strikes (even with the cheap steel case ammunition that I got from Wish.com, because that’s all I can afford these days). The trigger pins never walk out. That’s exactly what I wanted.

I also tried both trigger springs—the 4.5 pound trigger and the 5.5 pound trigger—and both produced the same results, which is nice. Occasionally, attempts to make the mil-spec trigger pull lighter cause light strikes. Both springs that come with the Heavy Gunner work fine.

Lastly, I tried this trigger with a bunch of different safety selectors to find out if it was as compatible as a bone stock mil-spec trigger. And there were no safety operation issues with any safety selector I tried.

All in all, the reliability checks out.

If it works, then it needs to work well. It’s also more expensive than most quality mil-spec triggers (like the aptly named ALG Defense Quality Mil-Spec Trigger). In theory, the Heavy Gunner will work better than a more affordable trigger.

However, I will admit that the Heavy Gunner delivers a slightly better shooting experience than the ALG Defense trigger.

Admittedly, it’s not much better. The main benefit you get from the Heavy Gunner is the slightly lighter trigger press. I understand why ALG Defense sticks with the 6 pound trigger press: to meet the true mil-spec standards.

Hiperfire says that the lighter trigger press is due to the enhanced sear geometry. That’s how they avoid the reliability issues that some mil-spec triggers run into when they lighten the trigger press.

Then there’s how the trigger press feels. 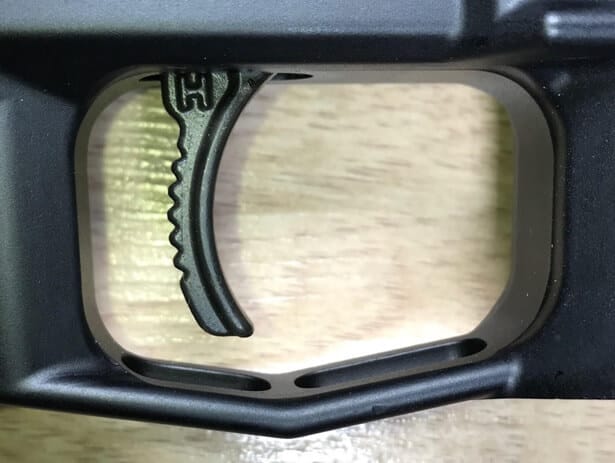 The Heavy Gunner is a single stage trigger. So there’s relatively little trigger movement. It just doesn’t take that much movement to get the trigger to break.

For me, that makes it very difficult to speak to the grit or smoothness of the movement, because there’s very little movement to assess.

However, a friend of mine who’s an avid competition shooter swears that the Heavy Gunner trigger moves incredibly smoothly. And I have no real reason to disagree. When I’m cranking off multiple rounds, I never notice any hangup in the trigger movement.

But what I do notice is the positive reset. I’ve had problems in the past with letting my trigger finger off the trigger between shots when I’m shooting fast. In simple terms, I move my trigger finger far more than I need to.

I’ve corrected that issue. However, I appreciate the super positive reset because it’s easy for me to fall back into that bad habit when the reset is too subtle, at least initially. It was super easy to pick up the Heavy Gunner and get my trigger finger movement right.

I’ve only used this trigger in shorter, tactical rifles. So I haven’t done a ton of long range precision shooting with this trigger. But I’ve shot slow enough to test the break, if only to zero my sights. 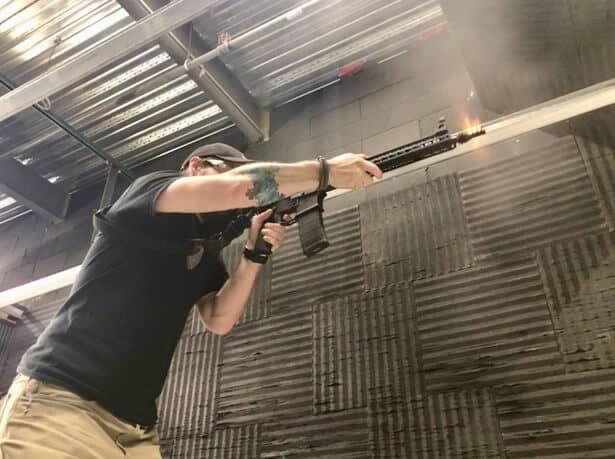 And the break is at least as good as the ALG Defense QMS trigger. It’s hard to pick a definitive winner. But the Heavy Gunner has an arguably better break than the QMS.

As I said, I’m not much of a trigger snob. Even if there were a tiny bit of creep in the break, I probably wouldn’t care. But, as far as I can tell, there’s basically zero creep in the Heavy Gunner trigger break.

It really produces a great trigger press. Easily good enough for a more precision oriented rifle, like an AR-10.

Is it as good as a Geissele? Probably not. But it’s not that much worse than a Geissele. And it’s far more affordable than a Geissele trigger. So the Heavy Gunner might have an edge in performance-per-dollar.

Overall, the Heavy Gunner performs incredibly well. As far as I can tell, you have to pay considerably more to get a meaningfully better trigger.

I couldn’t find any information about the steel in the Hiperfire documentation.

But, as far as I can tell, it’s some sort of tool steel. It’s probably the same steel you’d find in a true mil-spec trigger. Either way, I’ve yet to see a Heavy Gunner trigger break. So I’m sure the steel is fine.

However, I’m relatively impressed by the finish. Usually the finish on the hammer wears off pretty quickly. It gets exposed to a lot of corrosive gas. And the bolt carrier rubs against it pretty aggressively. 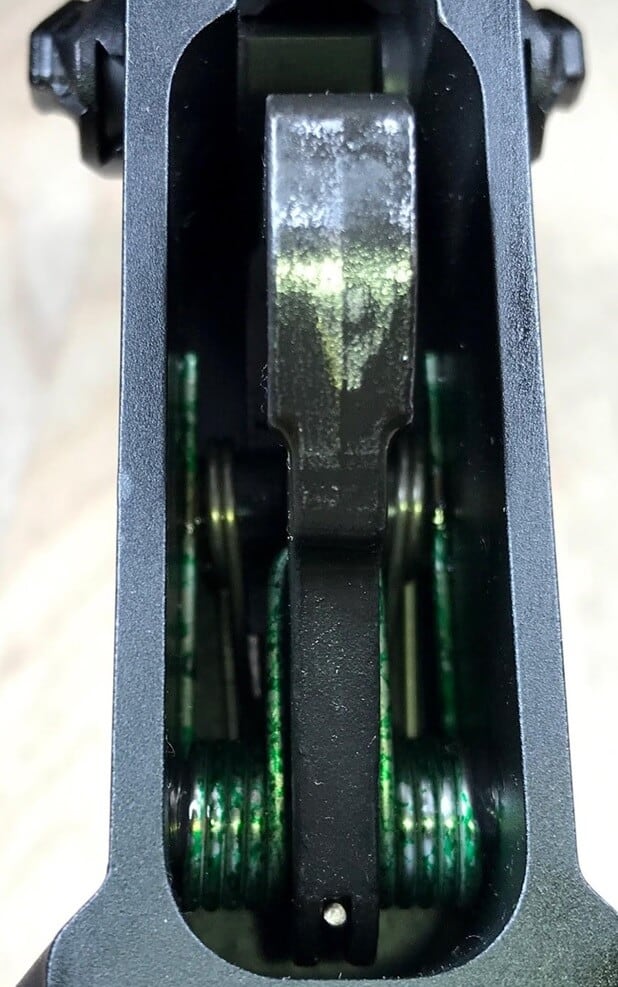 It took quite a few rounds to get this much wear on the hammer.

But the finish on the EDT Heavy Gunner holds up pretty well. No, it’s not invincible. It’ll take a while for your hammer to start turning silver, though.

Additionally, the trigger springs feel like they hold their tension incredibly well. The pull weight stays almost exactly the same, even after the trigger breaks in.

Now, I haven’t worn out any Hiperfire trigger springs, yet. But I’m relatively certain they’ll last at least as long as basic mil-spec springs, which is a really long time.

Ultimately, this trigger holds up quite well, even if all you can afford to shoot is steel cased ammunition that’s made of pure acid.

If you're looking for more options on excellent triggers, check out this page.

After shooting Hiperfire EDT Heavy Gunner Triggers a lot, I can pretty confidently admit that this trigger probably won’t oust any of the Geissele triggers in terms of pure performance.

However, for the money, the Heavy Gunner is a super strong value.

Yes, it’s more expensive than most of the competing improved mil-spec triggers. But the trigger feel and construction is good enough to justify the additional cost. I feel that the Heavy Gunner is super reasonably priced.

If you’re interested in having a good trigger press, but aren’t picky (or rich) enough to insist on a Geissele trigger for everything, the Heavy Gunner is pretty much the perfect trigger for you. Take that for what it’s worth.

Reasons Why Custom Trigger Is a Must