The Hiperfire EDT Sharp Shooter Might be the Best PCC Trigger 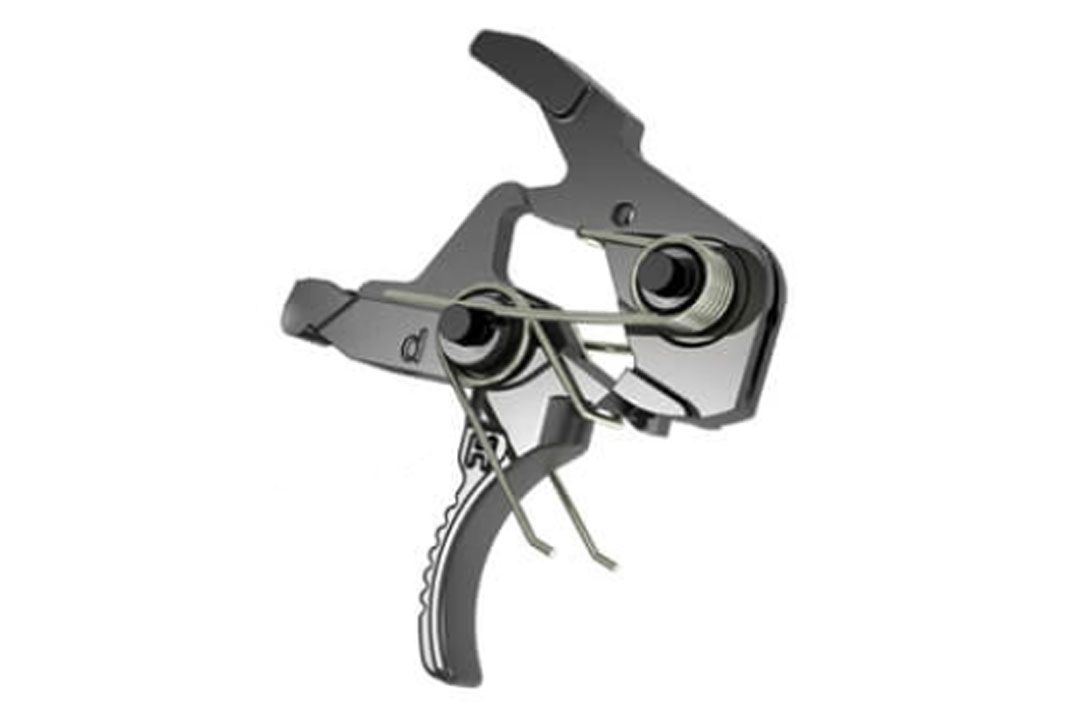 That’s a pretty strong theory. But there’s a lot of evidence for the claim that the Hiperfire EDT Sharp Shooter Trigger is an excellent option if you’re building a pistol caliber AR. It’s also a strong option for a rifle caliber AR-15.

However, the difference between the Heavy Gunner and the Sharp Shooter is less arbitrary on a pistol caliber carbine.

The Heavy Gunner might deliver a hammer strike that’s actually too strong for pistol primers. It hits hard enough to ignite even super hard 7.62 NATO primers.

The Sharp Shooter has a lighter hammer. It doesn’t hit quite as hard. So it’s a better option for a PCC.

But, calibers aside, this is a solid trigger. It’s one of my favorite triggers. Here’s why.

My disclaimer about this trigger is that you probably won’t think it’s awesome if your baseline for comparison is a Geissele trigger.

The Sharp Shooter might not be as amazing as a Geissele. But it’s a lot more affordable. And being slightly less good than a Geissele doesn’t mean it’s bad, because Geissele makes pretty high-end triggers.

Anyway, here’s my case for using this trigger to save yourself like $150.

This isn’t my first trigger rodeo. And I’ve developed a preference for mil-spec triggers.

It’s not that drop-in triggers are terrible. It’s because, in my experience, mil-spec triggers are less complicated.

I never have to worry about using anti-walk pins or whatever. And I almost never have function issues with mil-spec triggers, so long as I’m not using super light springs or something like that.

So I almost exclusively use mil-spec and improved mil-spec triggers.

Long story short, the EDT Sharp Shooter feels and operates like a really nice mil-spec trigger. And that’s exactly what I want. 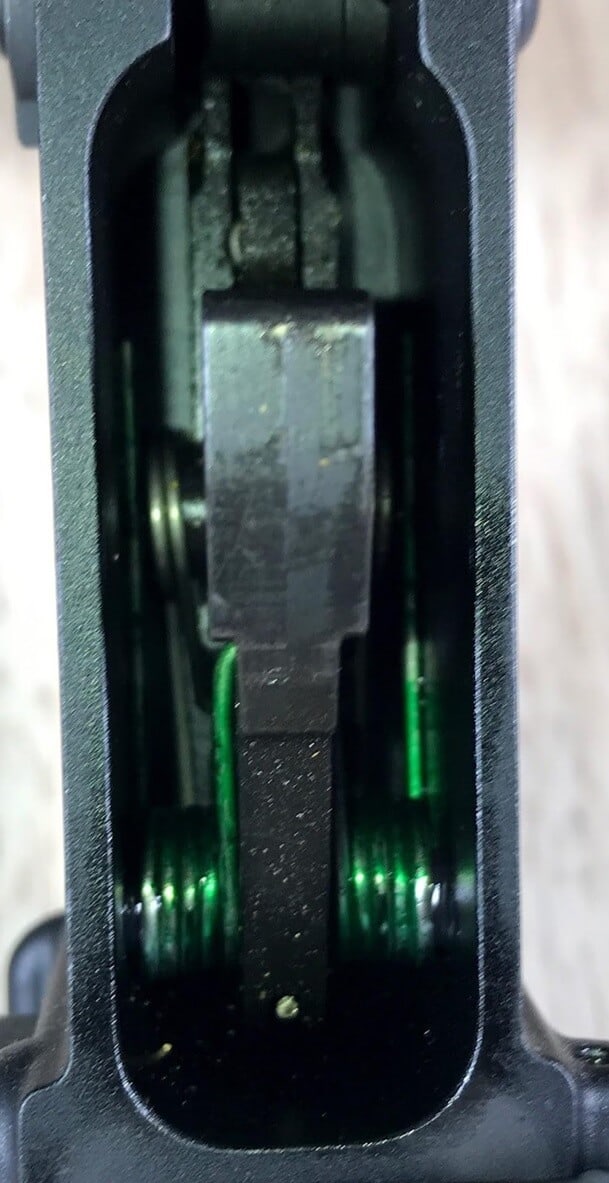 That's basically a mil-spec trigger down in there.

From a reliability standpoint, this trigger has operated flawlessly. I’ve mostly used it for shooting pistol caliber rounds, specifically 9mm. But I tossed a rifle upper on it, just to test drive it with a rifle caliber. And it ran great.

No light strikes or anything like that. And the pivot pins never move, because mil-spec triggers rock.

It also didn’t seem to be hitting the primers too hard or anything.

In theory, you shouldn’t get pierced primers, even if your hammer is hitting too hard. Correct firing pin protrusion should prevent the firing pin from piercing the primer.

But I’ve been warned that too much force from the hammer strike can either pierce the primer or cause it to separate from the casing. None of that happened with this trigger, not that I expected anything to go wrong (I’ve only seen this happen when something else was wrong, namely too much firing pin protrusion).

Lastly, this isn’t a true mil-spec trigger. It has some proprietary design elements.

So I tested the Sharp Shooter trigger with a few different safety selectors—90, 45, and 50 degree selectors—just to make sure that it would engage properly with any safety selector. No issues there either.

Overall, this trigger ran perfectly from a reliability standpoint. And it didn’t cause any complications in the pistol caliber carbine. 10/10, would recommend.

From a trigger feel standpoint, I really like this trigger. That’s the cliff notes version of my experience.

To get more detailed, though, the two aspects that I appreciate most are the minimal trigger movement and the break.

I’ve talked to a few people who rave about how smooth the trigger movement is. But I didn’t really notice, because the trigger simply doesn’t move that much. The pre-travel and reset are both quite short.

However, there’s another fellow in the shop who shoots a lot of competition. He exclusively uses Hiperfire triggers on his competition rifles. And he says the trigger movement is buttery smooth.

But all I noticed was that the trigger didn’t move that much. And I like that.

If you’re more discerning about how smoothly your trigger moves, according to my sources, there’s no grit or stickiness.

The thing that I didn’t need to consult a competition shooter to evaluate is the break. 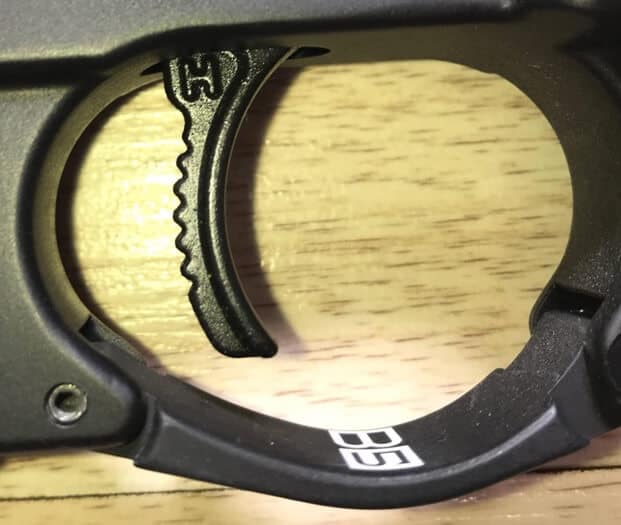 I’m not that picky about triggers—otherwise I’d just get a more expensive trigger and deal with the shot to my wallet—but the Sharp Shooter has a pleasant break.

Most of my shooting is quick, tactical shooting. But I’ve done enough slow, precision shooting with this trigger to really feel the break. And it’s nice.

As far as I can tell, there’s no creep. Once you hit the wall, the trigger doesn’t move until it snaps.

It’s easy to slip back into those bad habits. But the positive reset made it super easy to get accustomed to where the trigger resets and keep my trigger finger from flying.

Lastly, no matter which hammer spring you use, the trigger pull feels lighter than a true mil-spec trigger. The military specification is like 6 pounds or something like that.

It’s not a huge difference. But, if you’re into precision shooting, the Sharp Shooter is a definite upgrade over a mil-spec trigger.

Even if you’re not a precision shooter, this is still a nice upgrade over a mil-spec trigger.

On the other hand, this trigger isn’t quite as nice as a high-end trigger like a Geissele, as much as it might pain me to say that.

However, my case for this trigger is that you have to pay significantly more to get a noticeably better trigger press.

So the performance might not be at the very top of the heap. But the performance-per-dollar is (arguably) higher than any other trigger on the market right now (the LaRue MBT-1S is a strong competitor, but not conclusively better).

The durability section on a trigger should always be short. As long as the trigger doesn’t break your rifle or break itself, it’s good to go. 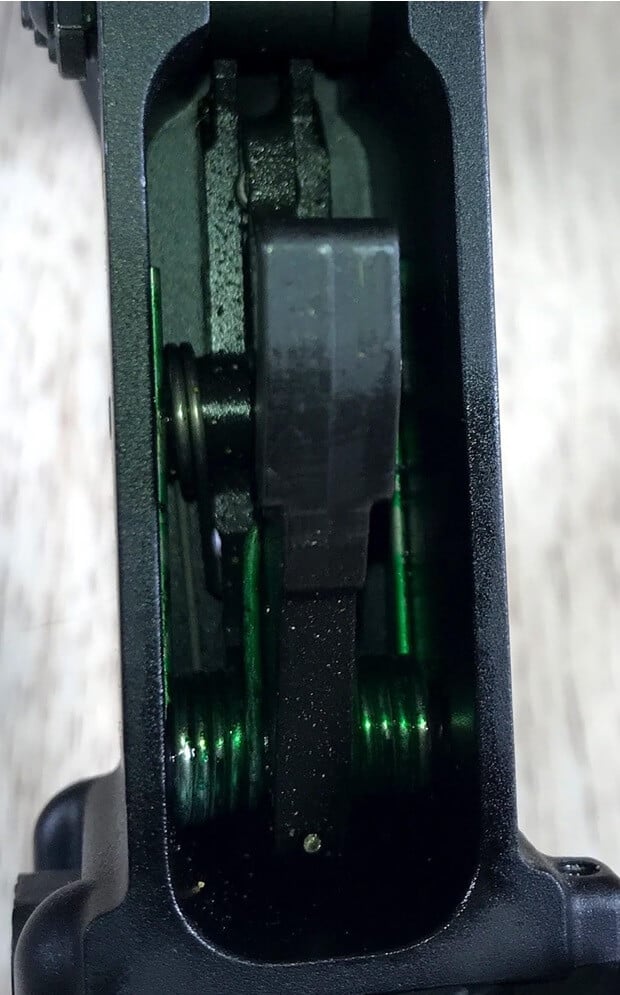 Maybe 9mm bolt carriers wear your hammer less, but this one is still impressively black after a lot of rounds.

Good news: I’ve never had a Hiperfire trigger break itself or break my gun. Even the included pins have never been a problem.

So this section can be as short as is supposed to be.

The only other thing worth noting is that the finish holds up impressively well. It’s not invincible. But I found that it took quite a bit of shooting to even start wearing the hammer down to the silver.

The hammer gets beat up quite a bit. And it’s in there with all the corrosive gases and whatnot. Most finishes wear through to the silver pretty quickly. The Hiperfire finish eventually gave out. But it put up a very respectable fight.

That indicates to me that the finish should protect the other components—the trigger and the sear—for a long time. It will most likely take a lot of shooting to start degrading the trigger press.

All in all, the finish is tough and protects your trigger components they way that it should.

The main thing that makes the Hiperfire EDT Sharp Shooter special is that it’s a solid trigger that’s not crazy expensive.

The performance felt better than even nice mil-spec triggers like the ALG Defense QMS Trigger, which is less expensive. And no other trigger with a similar price performs better in a really meaningful way.

If you only accept amazing triggers, you’ll probably have to spring for something like a Geissele. On the other hand, if price is your only concern, you can get a perfectly usable trigger for less.

But, if you’re willing to accept a slightly less than amazing trigger to save a bit of money, the Sharp Shooter is probably right for you.

As such, the Hiperfire EDT Sharp Shooter sits firmly at the top of the “middle of the road” class of triggers. If that’s your thing, you’ll probably be into the Sharp Shooter.

Best AR 15 Trigger for the Money

Advantages of Having a Custom Trigger