By now, just about everyone knows about Holosun. They’ve made a name for themselves as a manufacturer of budget optics. I love affordable stuff. So, naturally, I have a Holosun HE503CU-GR red dot (you can also get the HE503CU Paralow Red Dot if you want a red reticle).

Yes, it’s reasonably priced. But, low price or not, it still has to be a good red dot to make it worth the money.

I put this red dot on a couple different carbines. And gathered some evidence to answer the important questions.

How good is this red dot? Is it good enough for government work? Does it work for people with astigmatism? Is it still a red dot if the reticle is green?

My research revealed the answers to most of these questions.

I needed an optic for my 9mm carbine. So that’s the gun this red dot rides most of the time.

But my 9mm carbine is pretty much a standard AR-15 in terms of how the optics mount and the controls.

Also, I ran this on a 5.56mm carbine enough to zero it and run some drills. But this is an unmagnified red dot. It’s not really designed for shooting much further than the maximum range of 9mm (100 yards or so).

As far as I can tell, this red dot would work just fine on a rifle caliber carbine, so long as you’re not trying to do long range precision shooting.

Anyway, on with my discoveries about the HE503CU.

My main concern with any budget optic is the build quality and durability. In both categories, the HE503CU is pretty good. But I do have some critiques in this area.

However, the overall build quality and durability is solid.

The housing and the mount are both machined from aluminum. And the machining is clean. Even the corners have been cleaned up to remove any excessively sharp edges.

Additionally, just about everything is machined from aluminum. Occasionally, very inexpensive red dots will use plastic end caps to retain the lenses or plastic adjustment dials. The HE503CU is almost entirely aluminum and steel. 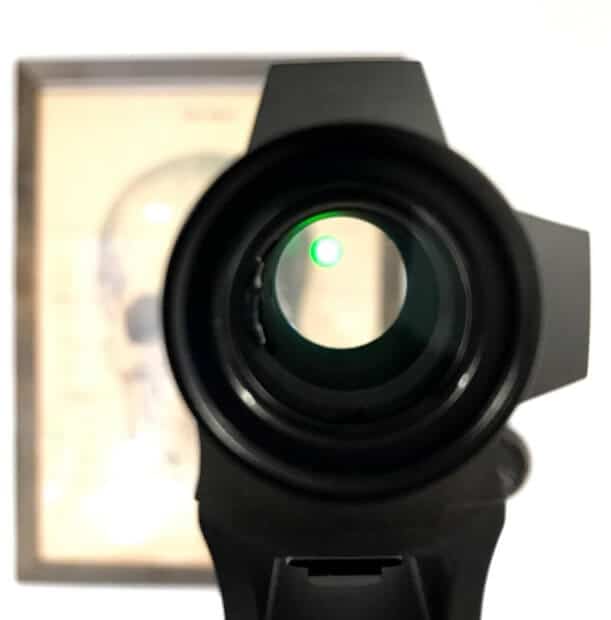 If there's any color distortion from the glass, it's hard to see.

I appreciated the mounting mechanism, too. Thumb screws are convenient. But I find them to be bulky. And you have to tighten them with a tool to get them really secure, anyway. So I like that the HE503CU mounts with a hex screw, rather than a thumb screw.

Then, the glass is impressively clear, given the price point. There’s very little image or color distortion from the glass, even at long range.

Maybe there’s clearer glass out there. But you’d probably only find it on a more expensive optic.

Unfortunately, not all the build quality news is good. I have one legitimate critique and one thing to whine about. 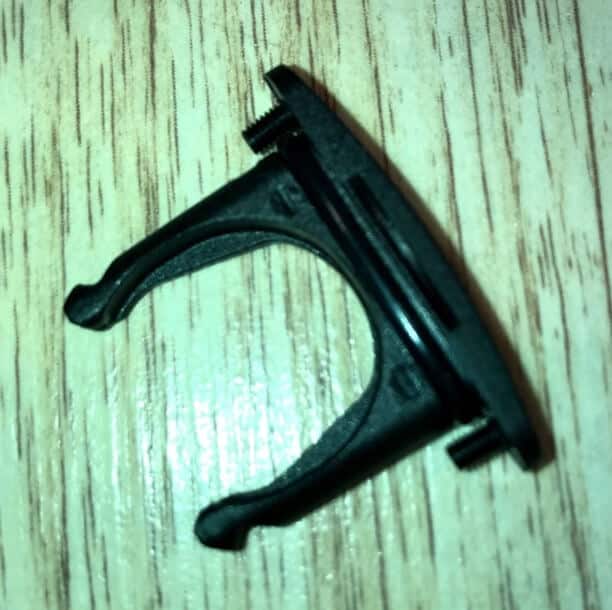 I would have taken a better picture if this was a better battery tray.

The legitimate critique is that the battery tray is plastic. Now, it works well enough. And it hasn’t deformed or leaked. 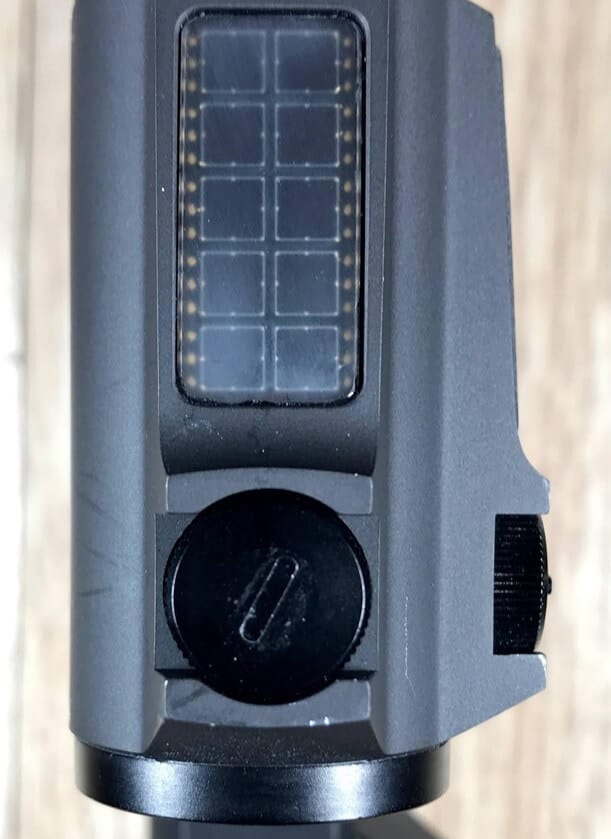 That cap is plastic. Oh, and that solar panel actually works.

At the end of the day, the battery tray could be more robust. However, the overall build quality is exceptional when you consider the price.

Price was a big factor in my decision to try this red dot. However, I’d also heard that this red dot works pretty well if you have astigmatism.

First, the circle dot reticle is excellent. The multi-reticle system is cool. But I almost never change the reticle. The circle dot works well for everything. However, you can use this as a true red dot, if you want.

The reason I like the circle dot is because it’s just a more capable reticle. The bottom hash mark on the circle works perfectly as an overhold mark to account for the mechanical offset in short range shooting.

And you can also use the edges of the circle for estimating target sizes and stuff at longer distances, even though an unmagnified red dot is not ideal for long range shooting.

For me, the reticle is impressively crisp, at all but the brightest setting. Sadly, I couldn’t get my camera to focus cleanly on the reticle to prove this. 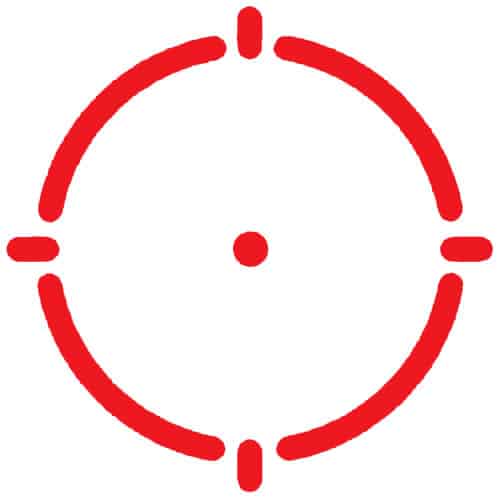 Anyway, most red dots have a sort of starburst effect for me, because of my astigmatism. This one has just a tiny bit of smear. I have no problem using the reticle for precision shots.

However, the reticle does flare out quite a bit at maximum brightness. I had people with normal eyeballs look at the reticle to see if the reticle just got sloppy when the brightness was all the way up. And they said the reticle was clear, but almost blinding.

It appears that my astigmatism eyes just can’t handle the full brightness setting (which makes sense, when you consider that astigmatism mostly causes problems with reflected light).

But that leads me to a more universal critique: the maximum brightness setting is crazy bright. I’ve never had to use it, even outside in full sunlight. Maybe the dial doesn’t need to go to eleven.

But your mileage may vary, if you have astigmatism, because not all astigmatisms are the same.

Ultimately, I found the reticle to be both impressively sharp and useful. That’s about as much as I can ask for from a red dot.

One of the standout features is the ease of use. The controls are very well-designed.

The turret caps have tabs on top that you use to adjust the windage and elevation. However, you can use a screwdriver, if you prefer. I found using the caps to be a pleasant experience, though. I don’t see any reason to use a screwdriver, unless you lose the caps (which is entirely possible, because they’re tiny). 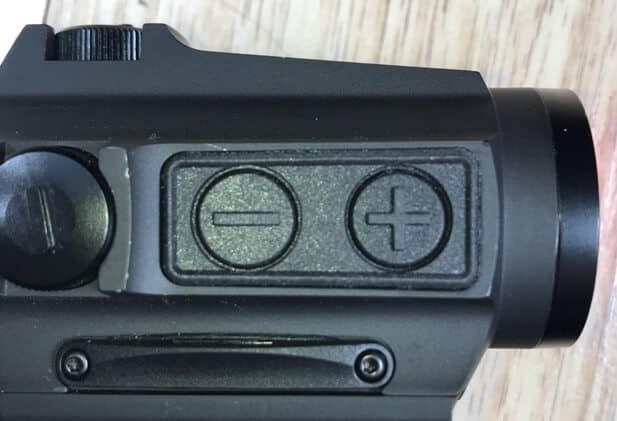 Additionally, the brightness and power controls are on the side of the body, which I think is the best place for them, even though they should be on the other side. This red dot discriminates against left-handed people.

But the best part about the controls is that I almost never have to use them. The shake-awake feature works great. I haven’t turned the HE503CU off since I finished zeroing it and setting the brightness. For me, this has been a set-it-and-forget-it optic.

This brings me to my last point: the battery life. Holosun claims that a single battery will last for 50,000 hours. I’m not sure if that’s true because the optic automatically turns off, then turns back on when I pick up my carbine. So my HE503CU hasn’t been on for 50,000 hours. 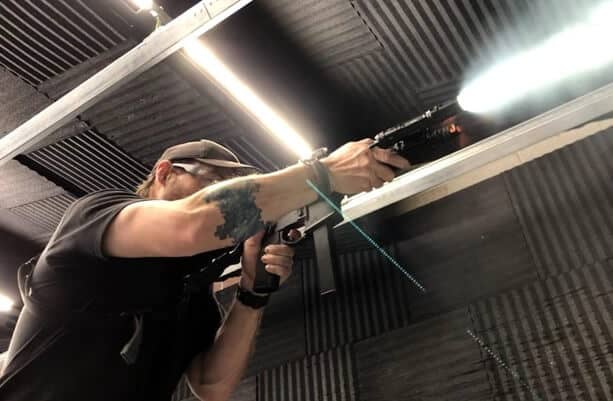 If you look closely, the HE503CU-GR is up there.

However, the battery management works. It’s gone for a little over a year on the same battery. And there’s no sign of the battery getting low. Even if the battery had only lasted for a year, that would have been fine with me. The battery life is more than enough to make me happy.

All in all, this optic has been awesome to use. Once you get it setup, you most likely won’t have to mess with it again for a long time.

You can also check out this Holosun HE510C review.

Getting the Dot on Target

At the end of the day, my experience with the Holosun HE503CU has been overwhelmingly positive. It’s a great option for anyone who needs an affordable red dot for a defensive or competition rifle.

However, I don’t know if I would recommend this red dot for use on a law enforcement or military duty rifle.

Yes, I’ve seen people run this red dot on a duty rifle without any issues. But the plastic battery tray concerns me. If not for that, I’d confidently say you could use this optic on a duty rifle.

Outside of that reservation, this is an excellent optic for any civilian carbine—defensive or otherwise. I definitely recommend taking advantage of the cost efficiency if you’re in the market for a red dot.

Also, you can call it a red dot, even though the reticle is green. Nobody calls it a green dot.