The Holosun HE510C-GR Might be a Legitimate Holographic Sight Alternative

Quick Navigation
Holosun HE510-GR Review: Like a Holographic Sight, but Less Expensive
Built Quality and Design
Operation
Reticle
Is It For You?

First, it’s more affordable—by a margin of a couple hundred bucks—than the dominant holographic sights on the market. And it’s got a pretty robust feature set.

The catch is that it’s not a true holographic sight. It’s a hybrid.

I’m not exactly sure of the electrical engineering involved. But, from what I understand, this is similar to a red dot sight. But it uses some design elements from a holographic sight.

Regardless of which reticle creation magic the HE510C-GR uses, the feature set and potential for being an astigmatism friendly optic prompted me to give this reflex sight a try.

Holosun HE510-GR Review: Like a Holographic Sight, but Less Expensive

Over the years, I’ve become a fan of Holosun optics. Admittedly, they might not be perfect for every context. But Holosun builds tough, affordable red dots and reflex sights.

That’s why I have a few of them mounted on different carbines. And, so far, my experience has been positive.

I didn’t shoot my HE510-GR with a shotgun. But I’ve shot with it a lot. This is what I’ve discovered.

From a materials standpoint, the HE510C-GR is pretty standard fare. It’s machined primarily from aluminum, with steel and polymer in the appropriate places. There may be a little bit more polymer on this sight than standard sights because there’s a solar panel.

The machining is clean, all the way around.

I always check optics for sharp edges and anything that might cut me, my sling, or anything else. When I did my out of the box inspection, everything looked good. The edges are slightly rounded. And there are no machining chatter marks on any of the flat surfaces. 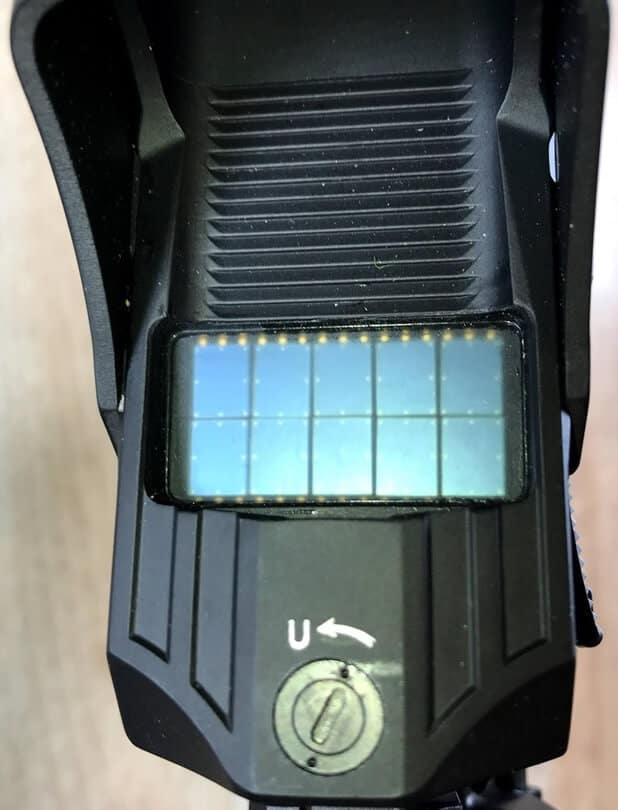 The solar panel is some sort of shatterproof polymer.

However, that’s not a real critique. That’s just speculation. The machining and build quality are very solid.

Then, this sight comes with the picatinny mount fixed to the sight. I’ll talk about the mounting height later. But there’s nothing wrong with the mount in terms of build quality and durability. It’s just as solid as most aftermarket optic mounts.

However, there’s one weak point on this sight that I think is a legitimate concern: the battery tray. The battery tray is plastic. 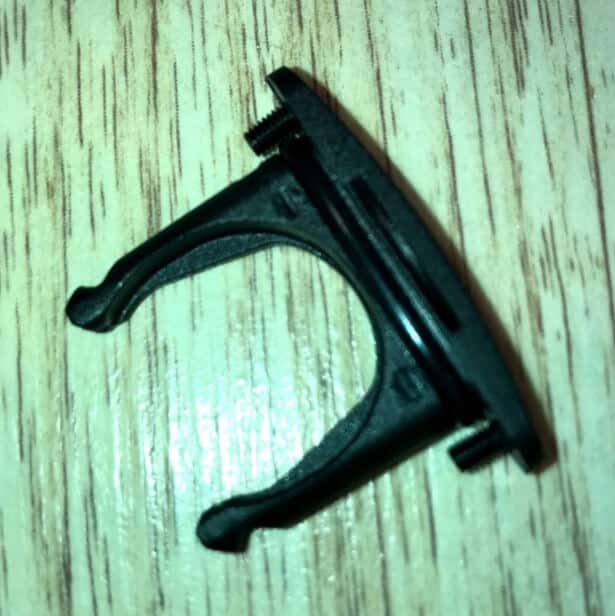 Maybe the picture wouldn't be so bad if the battery tray was aluminum.

The battery tray has never been an issue for me. And it sits flush with the aluminum body, which keeps it from getting beat up too much.

But I would feel more confident if the battery tray were aluminum. Though, I understand this would drive the cost up.

My complaints about one plastic part aside, the HE510C-GR is well-built, well-designed, and cleanly machined. No obvious problems.

The short story about using this sight is that it’s super nice to use.

The long story is that Holosun built this optic with a great feature set that makes it super pleasant to use.

First, the controls are in the best place. 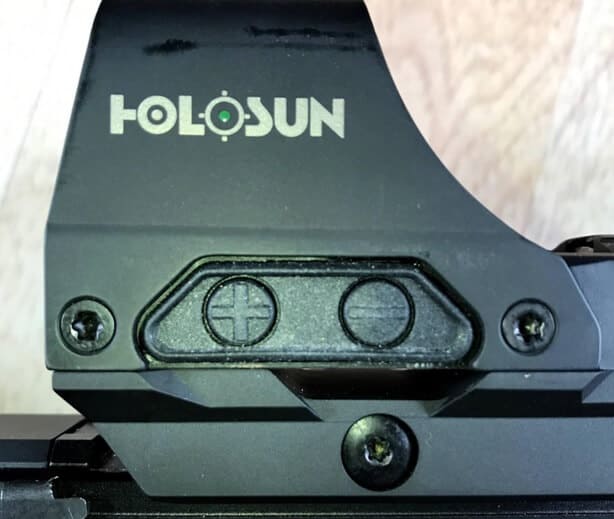 But my favorite thing about the controls is that I never have to use them. The shake awake feature works perfectly.

So I never turn the HE510C-GR off. And I never really adjust the reticle brightness. I found a nice happy medium setting that works in pretty much all conditions.

My main complaint about the reticle brightness is that the brightest setting is pretty much too bright, even in full sunlight. Also, I have astigmatism. A really bright reticle seems to aggravate my astigmatism and cause the reticle to flare pretty badly.

Unfortunately, I could NOT get my camera to bring the reticle into focus. But my challenges seemed to confirm that there are some elements of a holographic sight in this optic, because the reticle appeared to project into the distance when I tried to get a picture of it.

Anyway, the main trouble with the brightest setting being too bright is that I can’t really use the automatic brightness feature. Again, I don’t really need to. One of the medium brightness settings works well in pretty much all environments.

But I keep the automatic brightness adjustment turned off. Otherwise it might adjust the brightness to the maximum brightness and burn my eyeballs.

That excessive brightness is really my only complaint about the operation. The controls are well placed and simple. And I never have to use them, anyway, which means this optic is well designed.

The slight tint was never an issue, though. And I prefer the blue tint over a green tint. Some optics from Vortex Optics, Steiner, and others have that green tint, and it looks hazy to me. The blue tint seems less noticeable. 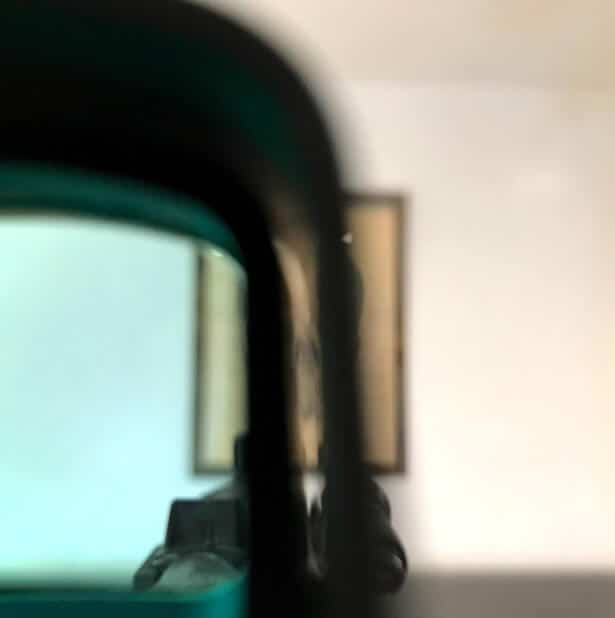 Notice the blue coloring from the glass.

On the bottom half, I’m also fairly impressed with the mount. It’s not perfect. But it’s good.

The locking mechanism is secure enough that I doubt you’d have any issues, even in high intensity operations. I understand the distrust of standard quick release mounts. But the HE510C-GR QD mount is super secure.

However, the mount is pretty low. It’s pretty much a true co-witness mount. You definitely have to tuck your head into your stock to get behind this sight. A higher mount would be more ergonomic and more consistent with most other Holosun optics. 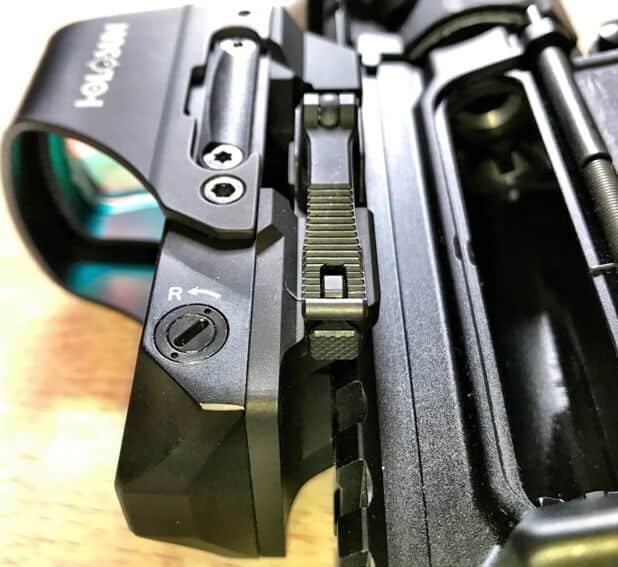 You can get a riser plate for this optic. You just have to purchase it separately. Interestingly, other Holosun optics come with a high and a low mount. It would be cool if the HE510C-GR also came with the riser plate.

The included mount might be a bit low for your preference. But it’s a well-designed and well-built mount. If the mount height is too low, there’s a riser plate available.

Is the operation perfect? Not quite. However, the operation is pleasant. And I really appreciate that I almost never have to mess with this optic. It just mounted it up and used it. Nice.

The multi-reticle system is cool. But I never use it.

The circle dot reticle is excellent. The bottom hash of the circle almost perfectly accounts for the mechanical offset in short range shooting. I think the bottom hash would be perfect with the riser plate.

But the reticle isn’t too cluttered to use at longer ranges.

Obviously, this sight isn’t designed for long range precision shooting. But I had no issues hitting an 8 inch square at 100 yards, even with the slightly smeared reticle from my astigmatism. You could probably drive it further if your eyes work properly.

In short and medium range shooting, the HE510C-GR works great. That’s what this sight is designed for, though. So I expected it to work well in that context.

The only thing I didn’t test were the night vision settings. I’m not an operator. I don’t have night vision. If you need a night vision reticle, you’ll have to check the performance yourself.

For normal shooting contexts, though, the reticle is great.

Feel free to check out our Holosun HE503CU review too!

Is It For You?

Even though I really like this optic, I think it’s best suited for civilian rifles. And it’s good enough for any type of civilian rifle—defensive, competition, recreational, or whatever else.

However, I’m not sure if it’s quite right for a law enforcement or military duty rifle (that’s why I didn’t take great pains to test the night vision brightness settings). The plastic battery tray makes me hesitant to say this is a duty grade optic.

Like I said, the battery tray has never been an issue. And it’s not sitting out there where it will get beat up too much. But, if you use this on a duty rifle, you may want to pay attention to that piece.

Also, the HE510C-GR has more forward light emission than a true holographic sight. That doesn’t really matter in the civilian context, even on a defensive rifle.

But, if it’s your job to sneak around and surprise people, the forward light emission could be an issue. That might not be a deal breaker for you. But it’s something to be aware of.

However, for everything other than true duty use, this optic is awesome. It’s affordable. And it performs admirably in any civilian shooting context, except maybe long range precision shooting.

If you’re looking for an affordable reflex sight, this is a great solution.