Archery Accuracy: How to Aim Your Bow 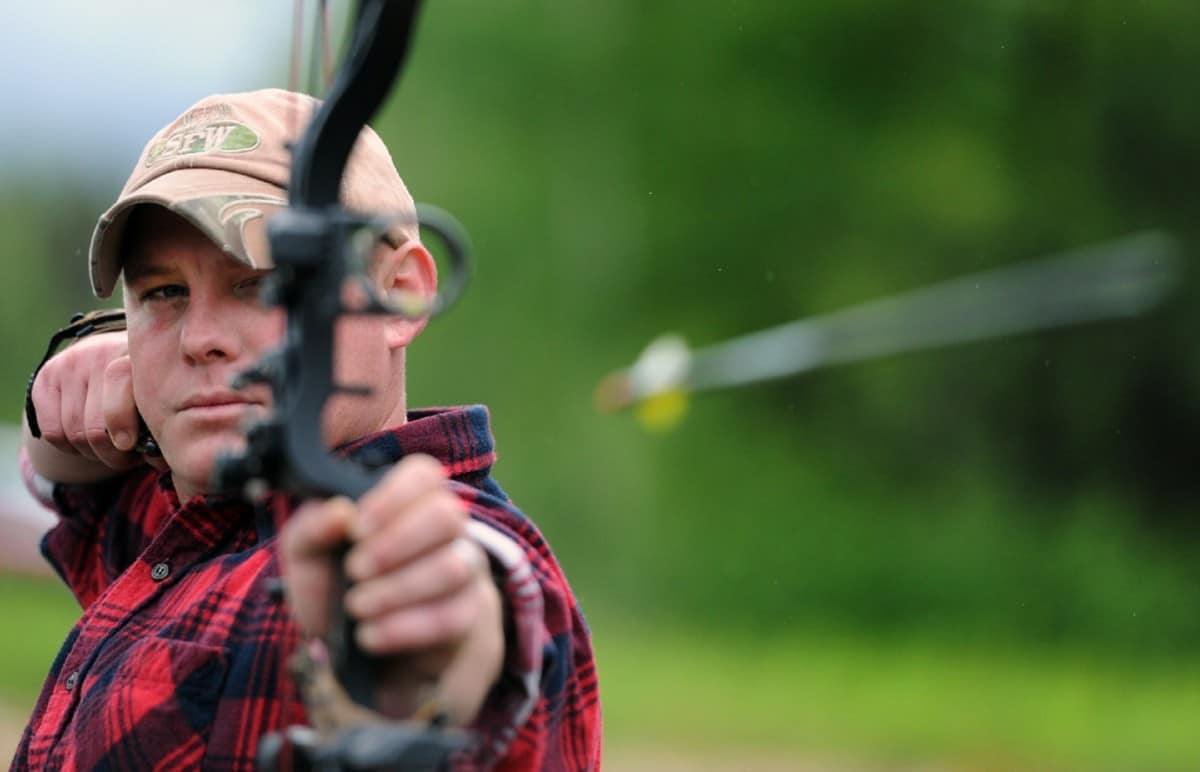 Aiming is the act of aligning a ranged or projectile weapon with an intended target to hit it — accurately, consistently. It doesn’t matter whether your weapon is a recurve or compound bow, crossbow, musket, rifle, shotgun, or pistol. The need to aim is universal among these weapons. The process of aiming a bow, however, is different from aiming a rifle.

As part of learning how to aim a bow, you’ll need to understand the different types of sighting systems available. There are many bow sights on the market, from reflector and magnified optical sights to metallic sights, varying in cost and sophistication.

A typical bow sight consists of three horizontal pins enclosed in a protective ring called a pin guard. These pins are aiming points designed to denote elevation at different distances. During the zeroing process, you’ll need to set each of the three pins for a different distance or yardage, usually varying from 20 to 60 in increments of 10 yards. If you’re using an iron bow sight, place the pin on the target that corresponds to the estimated range. The best way to estimate the range is to use a rangefinder.

For increased visibility and contrast, you can find fiber-optic and tritium pins for low-light shooting — ideal for dawn, dusk, and after dark.

Outside of sighted archery, there’s a practice called instinctive archery, where the archer doesn’t use a sighting system, instead relying on intuition to place arrows on target accurately.

This unconscious method of aiming can be based on a scientific or mystical foundation, depending on the archer. Regardless of how you approach the subject, you’ll need to practice regularly to learn how to aim a bow using this method and to achieve reliable results intuitively.

First, ensure you have a proper grip on the bow. When at full draw, locate your intended target and focus on it using your dominant eye. If the bowstring has a peep sight — a type of aperture sight — you’ll align this with the primary bow sight. If you’re using an optical bow sight, place the reticle on the target.

You may notice that the point of aim and point of impact do not coincide at a specific range. Aligning these two points is called sighting in or zeroing. You’ll need to adjust the position of the sight housing vertically and horizontally to zero it.

Place the pin or reticle on a target at a known distance and release an arrow.

When you change the brand or type of arrows you’re shooting; you should sight in the bow again. Arrows can vary widely in flight characteristics, depending on everything from manufacturing tolerances to shaft material. To track the performance of individual arrows, it’s worth numbering the vanes. That way, if a particular arrow shows consistent deviation from the point of aim, you can determine whether that’s due to the arrow or errors on your part.

The aiming process differs somewhat between compound and recurve bows due to the nature of the draw. The design of the compound bow, which uses a series of cables and pulleys, reduces the muscular effort needed to fully draw the bowstring. As the onset of muscular fatigue is delayed, you’re able to maintain full draw longer, allowing you to take your time aiming. This is part of the reason for the popularity of the compound bow among hunters.

Recurve bows, however, are more traditional in design. Simpler and generally less expensive than compound bows, recurve bows are also potentially more fragile. As the recurve bow provides no mechanical advantage to the archer, drawing the bowstring will require more effort, all else being equal. 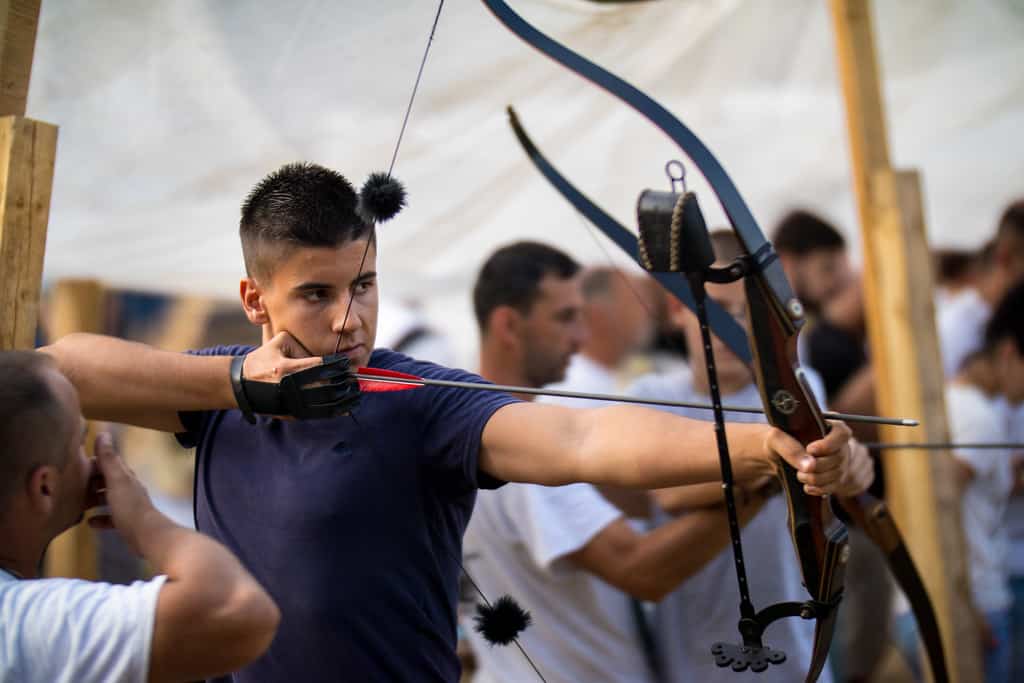 As a result, archers who shoot recurve bows tend to aim and release faster to avoid losing stability. Keeping a bowstring at full draw for an extended period can be exhausting.

There’s also the issue of over-drawing — drawing the bowstring more than is necessary or desirable for accurate shooting. In recurve bows, it’s easier to over-draw the bowstring, which can lead to inaccurate shot placement. One remedy for this is to use a device called a clicker. A clicker is a device that sits atop the arrow. When you reach full draw, the clicker signals the archer, telling you when to release.

Compound bows, in contrast, are inherently more difficult to over-draw.

It’s also important that you relax those muscles not directly involved in drawing the bowstring. Unnecessary muscle tension can cause fatigue and trembling, which are not conducive to accuracy.

The aiming process, including sights, for recurve and compound bows are distinct from that of a crossbow. Featuring a rifle-like stock, an arbalist or crossbowman aims a crossbow in a similar manner to a rifle.

The sights are also usually reflector, holographic, or telescopic sights, which function like rifle sights. The calibration, however, is different to account for the distinct trajectory of an arrow or crossbow bolt.

Whether you’re an archer or a bowhunter, aiming is integral to hitting archery targets or game animals consistently. While you can learn how to shoot your bow accurately without sights — instinctive shooting — this is more difficult and requires more practice. The aiming process is relatively straightforward, but it depends on the type of bow you have and