However, the KE Arms Assembled Upper Receiver only technically falls into the category of enhanced upper receiver. The “enhancement” is a minor modification that’s definitely not aesthetic, because it’s barely noticeable.

Is it worth it? Here’s what you need to make that decision for yourself.

There’s really only one enhancement on this upper receiver. It’s on the rear end of the flat top rail.

The top edge of the flat top rail—on top of the charging handle—is beveled. It’s designed to give you better access to a rear flip up sight.

It’s a very subtle modification. And it doesn’t really matter if you have a rear sight that’s spring loaded or that’s wider than the picatinny rail. 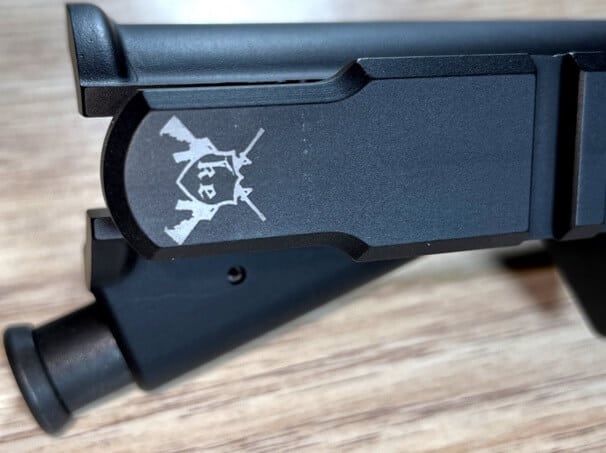 But it’s surprisingly nice if you have a narrower rear sight like the Magpul MBUS Pro rear sight or a Knights Armament Micro Rear Sight. No, it’s not life changing. It does what it’s designed to do, though. And it has zero impact on how this upper receiver functions when you’re not using your iron sights.

That’s why I think this is a worthwhile improvement to the standard mil-spec upper receiver form factor: you only notice the enhancement when you need it.

Other than that, this is a standard mil-spec upper receiver. Overall, this minor enhancement pretty well justifies the price point of this upper receiver, about $20 more than you’ll pay for most upper receivers.

The initial inspection of this upper receiver revealed some ups and downs in the realm of fit and finish. 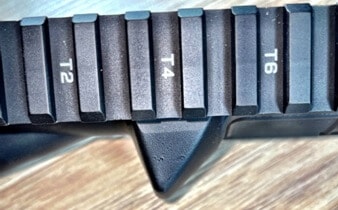 There are some imperfections in the finish on top of the brass deflector and under the forward assist channel. It also looks like something might have impacted the forged blank before the finish was applied.

Again, these are totally cosmetic issues. But it’s a little disappointing because this upper receiver is slightly more expensive than my usual uppers. This is a sample size of one, though. And I may have received one from the cosmetic blemish pile by mistake. 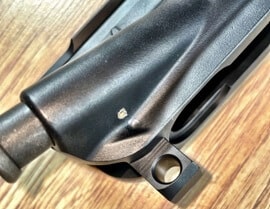 On the bright side, the exterior finish is excellent. It’s deep black and appears to be nice and thick. The specs say the finish is anodized. But it almost looks like cerakote.

Also, even though the finish is thick, it appears to be smooth and evenly applied. The barrel nut for my handguard threaded onto the barrel extension without any weird binding or grittiness, which can happen with thicker finishes like cerakote.

The threads are also precisely machined and cut correctly. The barrel nut seated and torqued properly. All the dimensions seem correct. 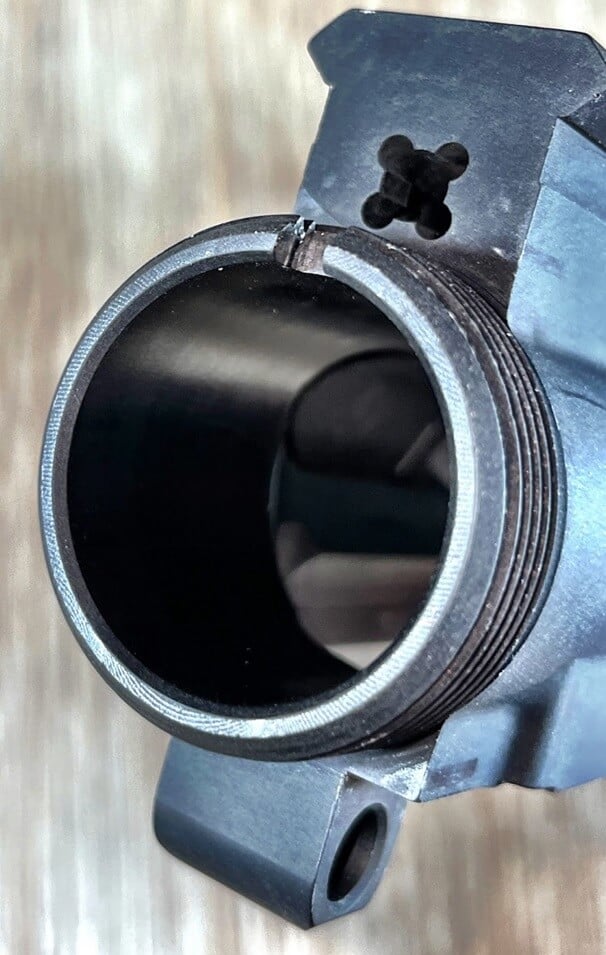 With the barrel and gas tube installed, I dropped a functioning bolt carrier into the tube to check for gas tube alignment and excessive play in the bolt carrier channel. Everything checked out nicely.

If it weren’t for the cosmetic imperfections, I’d say the finish on this upper receiver is incredible. But, even with the cosmetic blemishes, the fit and finish are really good.

Upper receivers are almost never the source of function issues. It happens, but incredibly rarely.

The KE Arms upper receiver was no exception. It ran like a charm.

I checked it with a couple bolt carrier groups, both suppressed and unsuppressed. I popped it onto a couple of lower receivers. Everything lined up fine. No malfunctions. No weird wear marks from the cam pin or gas key.

Additionally, the finish seemed to resist brass residue better than most. The brass deflector eventually started to pick up some gold streaks. But it took noticeably longer than on most other upper receivers. 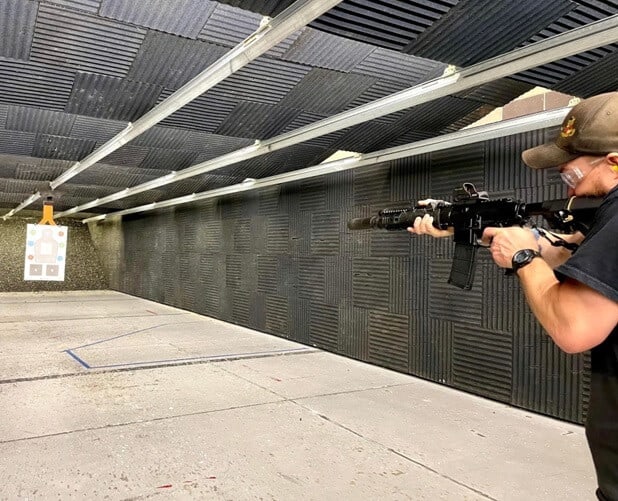 The brass residue scrubbed off easily with an all purpose brush. And there was no significant wear on the finish from a few hundred rounds of brass. That’s good news.

Overall, nothing to report. Perfect operation.

In terms of features and operation, this is a really good upper receiver.

It’s reasonably priced, though not the cheapest on the market. The improvements to the mil-spec design are thoughtful and useful. And the anodized finish is one of the best I’ve seen.

Unfortunately, mine came with some cosmetic problems. They’re not deal breakers, by any stretch of the imagination. But it does make it slightly harder to confidently recommend this upper receiver.

I suspect that the issues I found on my upper receiver are anomalies. If you order a KE Arms upper receiver for yourself, it will probably come without any issues.

But the reality is that mine did come with some blemishes. Bear that in mind if you’re ordering one of these upper receivers.

However, even if it doesn’t look perfect, you’ll definitely be happy with the performance. And that’s probably good enough for most people.