I’m not a huge fan of super enhanced controls. Usually, they just add bulk to your lower receiver. And I find that the ergonomic improvements are often marginal, at best. At worst, enhanced controls just turn your rifle into a snag machine. Speaking of improvements, Lantac also has muzzle brakes that makes pretty solid performance in recoil reduction.

As you can tell, I’m pretty skeptical of improved controls. If I’m being honest, the reasons I was willing to give the Lantac BC-Pro Upgraded Bolt Catch a try are kind of lame.

I gave this bolt catch a shot because it looks cool and it didn’t seem like it would mess up my rifle. It’s basically just a regular bolt catch that has a larger paddle. So I felt pretty confident that it wouldn’t be worse than the mil-spec bolt catch.

And, overall, I’m pretty satisfied with the BC-Pro. Here’s a quick rundown of my conclusions from running this bolt catch.

The finish is probably the one thing about this bolt catch that I wasn’t super stoked about. 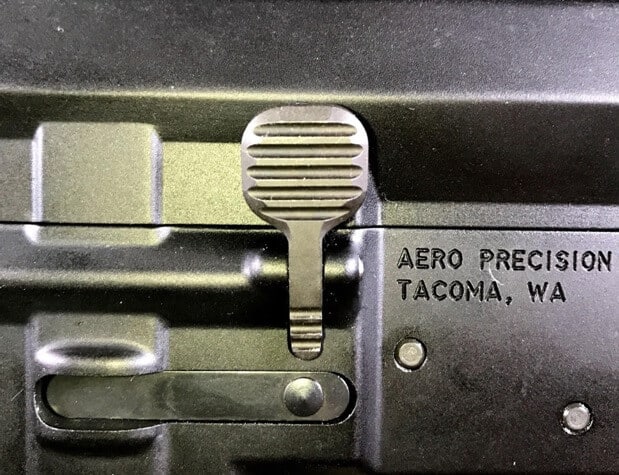 The finish is slightly more matte than the upper receiver finish.

I’m kind of a stickler for good finishes. It’s not that the finish is bad, by any measure. But the finish on the BC-Pro isn’t quite as smooth as I was hoping it would be.

Lantac usually has outstanding finishes. And the product imagery makes it look like this bolt catch has an almost polished melonite finish or something similar.

However, the finish is more matte than it looks on Lantac’s product page. Now, don’t get me wrong, the finish is really nice. It’s just not quite as glossy as I hoped it would be. 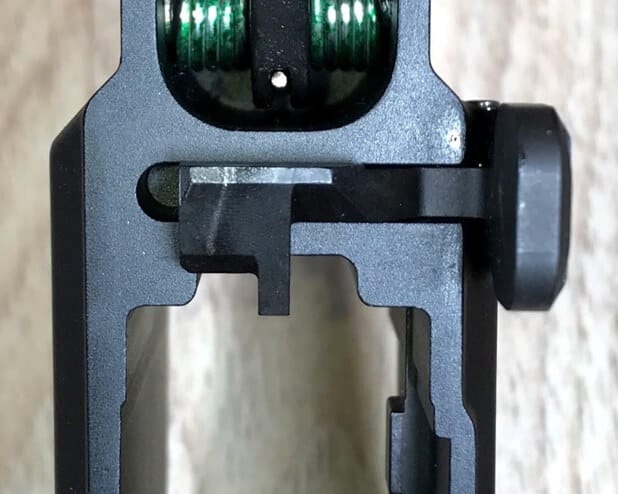 It still looks really good, though. It’s a darker, more consistent black than my old mil-spec bolt catch. And it matches the finish on my M4E1 Lower Receiver better than the grayish mil-spec finish.

All in all, the finish is really nice. But it’s a matte finish, not a semi-gloss finish.

The main reason I was willing to try this bolt catch is that it’s about the same size as a mil-spec bolt catch.

The paddle is slightly larger than the mil-spec paddle, both in height and width. It’s definitely a bigger target to hit. Whatever bolt release technique you’re into, you won’t miss this bolt catch. 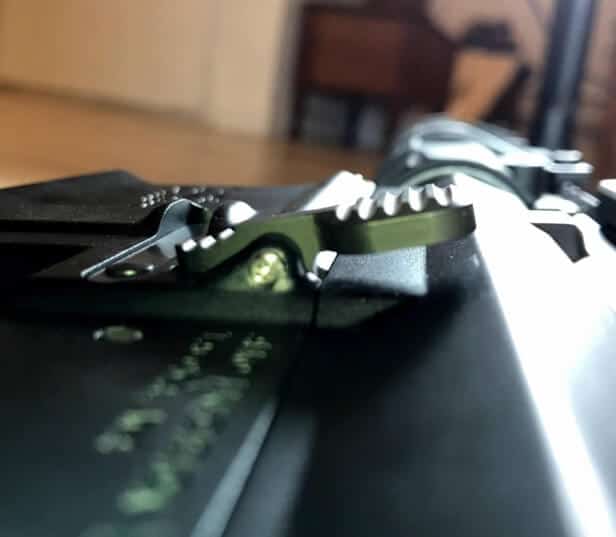 Look how deep those serrations are.

Overall, this bolt catch isn’t a game changer. But it’s a little faster and easier to use than the standard mil-spec bolt catch. That might matter to you, if you’re counting milliseconds.

Overall, my experience with the Lantac BC-Pro has been pretty positive. It works exactly the way I had hoped. It’s a bit better than the mil-spec bolt catch. But it doesn’t add any weird bulk or annoying gimmicks.

My only complaint is that this bolt catch is expensive. It’s one of the most expensive aftermarket bolt catches on the market. But Lantac has never been a budget parts manufacturer. So that’s not really a surprise, for me.

But the price is actually the biggest hangup, in my opinion. Yes, this bolt catch is easier to use. However, I think you could get at least the same performance from a less expensive bolt catch.

I will warn you, though, many of the more affordable aftermarket bolt catches are actually too big. They often stick out weirdly far out. It seems that the premium price you pay for this bolt catch buys you a bit of restraint when it comes to enlarging the bolt release paddle.

So, if you want a tastefully improved bolt catch, you may have to pay the price to get the BC-Pro.