The ASAP Ambidextrous Sling Attachment Point is Better Than Some Say 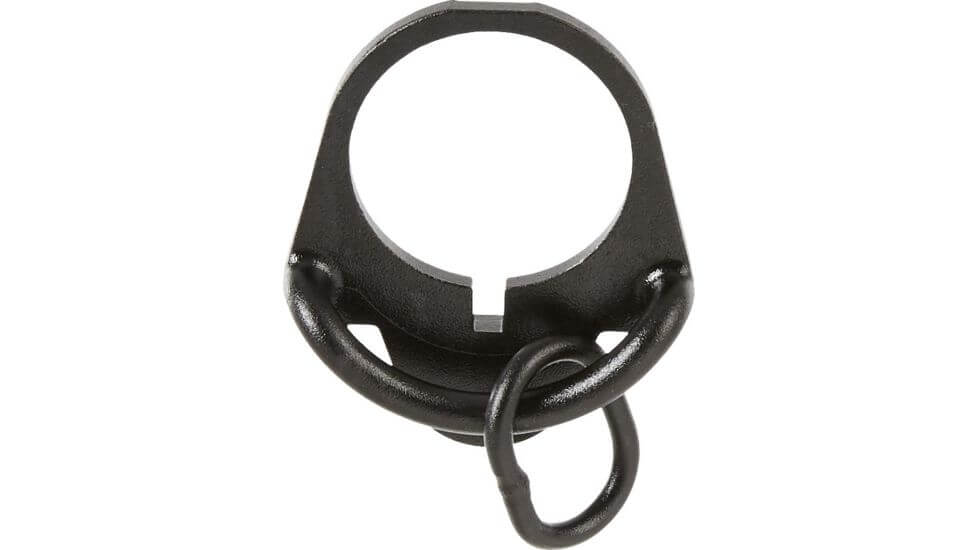 Some guys at the shop give me a hard time about using the ASAP. In a moment, I’ll explain why they razz me about it and why I don’t care.

But there are other reasons to use the ASAP (or not to use it), which I think are more important than my coworkers making fun of me. Let’s talk about those, first.

I’m a left-handed shooter. And I prefer to attach my sling to the rear of my lower receiver, rather than the rear end of my stock.

As such, some sort of ambidextrous sling attachment end plate is kind of a must for me. And I find that the ASAP end plate is the best solution for me. Here’s why.

The main reason I like this end plate is because I find that the design works best for the types of shooting that I do and the slings that I use.

With a standard QD socket, I find that sometimes the sling will hang up when it needs to rotate as I present my rifle or perform some rifle manipulations.

The loose sling attachment link on the ASAP end plate doesn’t have this problem, because it slides freely. Wherever the sling needs to go, it just slips to that position.

I also find that this attachment point is the best for moving the rifle from one side to the other for weak hand shooting. It just gives your sling the most freedom to move on the end plate as you get the rifle into different shooting positions. So it causes fewer hangups with your sling.

However, the sling attachment point is the thing that my coworkers make fun of me for.

When there’s no sling attached to the link, this end plate rattles. It also makes a tiny bit of noise when you move your rifle around on your body, even if there’s a sling attached.

The guys say that the rattling will give away my position.

Also, I’m a civilian, not an operator. I’m not hunting people. Defensively speaking, if the bullets don’t give away my position, nothing will.

In short, the noise from the sling attachment link is a non-issue for everyone who’s not an operator, which is 99.99% of the population.

This is how your ASAP end plate will look if you lose your anti-rotation tab.

If all your slings have QD sling swivels, you’ll have to buy at least one new piece of sling hardware. I recommend using a Magpul Paraclip or a MASH Hook, because the HK hooks have a tendency to bend.

Then, I have one other complaint about this end plate: the anti-rotation tab is not attached to the end plate.

I understand why Magpul used this design. The ASAP comes with two tabs: one for mil-spec buffer tubes and one for commercial buffer tubes. It’s the most compatible design possible without producing two different end plates.

It adds a little bit of convenience for the end user, because you don’t have to worry about purchasing an end plate that doesn’t fit your buffer tube.

Thanks for that, Magpul. I hate it.

I’m just being dramatic, though. It’s actually a very small issue. If you just turn your lower receiver upright, so the end plate faces up, the anti-rotation tab is easy to install with a pair of needle nose pliers or something similar.

So, complaints and ridicule aside, the ASAP end plate enables your sling to move more freely than almost any other sling attachment end plate I’ve found.

This is how it's supposed to work, with the anti-rotation tab installed.

The most legitimate concern about this end plate is the compatibility. The downsides I’ve already mentioned are basically just whining.

However, as you can tell from just looking at this end plate, you can see that the attachment hardware protrudes from the back of the end plate more than standard QD attachment end plates.

This isn’t an issue for standard carbine stocks.

However, it is an issue with some precision stocks, fixed rifle stocks, and carbine stocks that sit flush against the end plate.

Avoid the ASAP end plate if you plan on using a stock that sits flush with the end plate.

Another thing that people have expressed concerns about with the ASAP is the durability. They’re concerned that the sling attachment bar and link might present some sort of liability.

However, all the hardware is welded to the end plate. And it’s some sort of carbon steel. Anything that would break the ASAP would probably break your sling or a standard QD sling swivel.

I doubt that any other sling attachment end plate—QD socket or otherwise—would be meaningfully stronger than this one. I’d be willing to bet that your sling would give out before the attachment hardware on the ASAP would break.

Unless you’re doing some crazy abusive stuff with your gun, the durability won’t be an issue.

My one complaint about the ASAP is that the finish looks really nice when you get it. But then it turns gray pretty fast. This is totally cosmetic. But I’d like it if the finish held its color a little better.

It’s worth noting that I believe Magpul has upgraded the finish so that this doesn’t happen anymore. Don’t quote me on that, though. I’m not completely sure.

Gripes about the finish aside, this end plate is plenty durable enough that any ordinary person won’t have to worry about it breaking.

Ultimately, I find that this Magpul ASAP Ambidextrous Sling Attachment Point makes my rifle easiest to handle with the sling attached, which makes it easy to shoot from all the different shooting positions. And that’s pretty much the whole point of a sling attachment end plate.

It might rattle a little when there’s no sling attached. But I always use a sling when I’m shooting. So I don’t care about that.

In the end, don’t let your tacticool friends bully you if you use this sling mount. The ASAP end plate works really well for shooting. And that’s what matters.