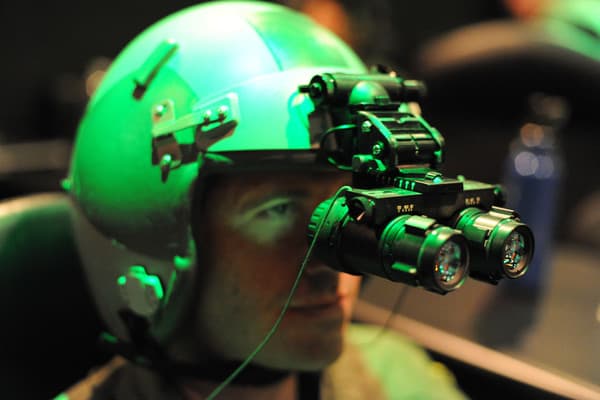 It’s no secret that humans don’t see very well in the dark. However, just because we have a hard time seeing at night, doesn’t mean there isn’t plenty going on after the sun goes down.

Fortunately, humans are problem solvers. Although our limited night vision is an undeniable disadvantage, we’ve used our most valuable asset (our brain power) to solve the problem.

Since humans first produced fire, we’ve been finding new ways to light up the night. While lanterns and electric lights certainly help illuminate the darkness, they aren’t really the best way for humans to see in the dark.

Night vision technology now allows us to observe our surroundings at night without alerting anyone (animal or human) to our presence.

At one time, night vision devices (also called NVDs) were so expensive only those on a governmental budget could afford them. However, as technology has advanced, prices have dropped, and more civilians are taking advantage of the technology.

Although the most cutting edge NVDs are still pretty pricey, there are many affordable options for regular Joes like you and me.

How an NVD works largely depends on the generation of technology used. However, the basic concept remains mostly the same.

NVDs work by gathering ambient light. After the sun goes down, ambient light (although minimal) is mostly a result of light emitted by the moon and stars.

When light enters an NVD, it hits a surface called a “photocathode.” The photocathode senses the light and converts it to electrons. The device amplifies these electrons using a “photomultiplier.” The output from the photomultiplier is then transferred to a phosphor screen where an intensified image of the original light is displayed. 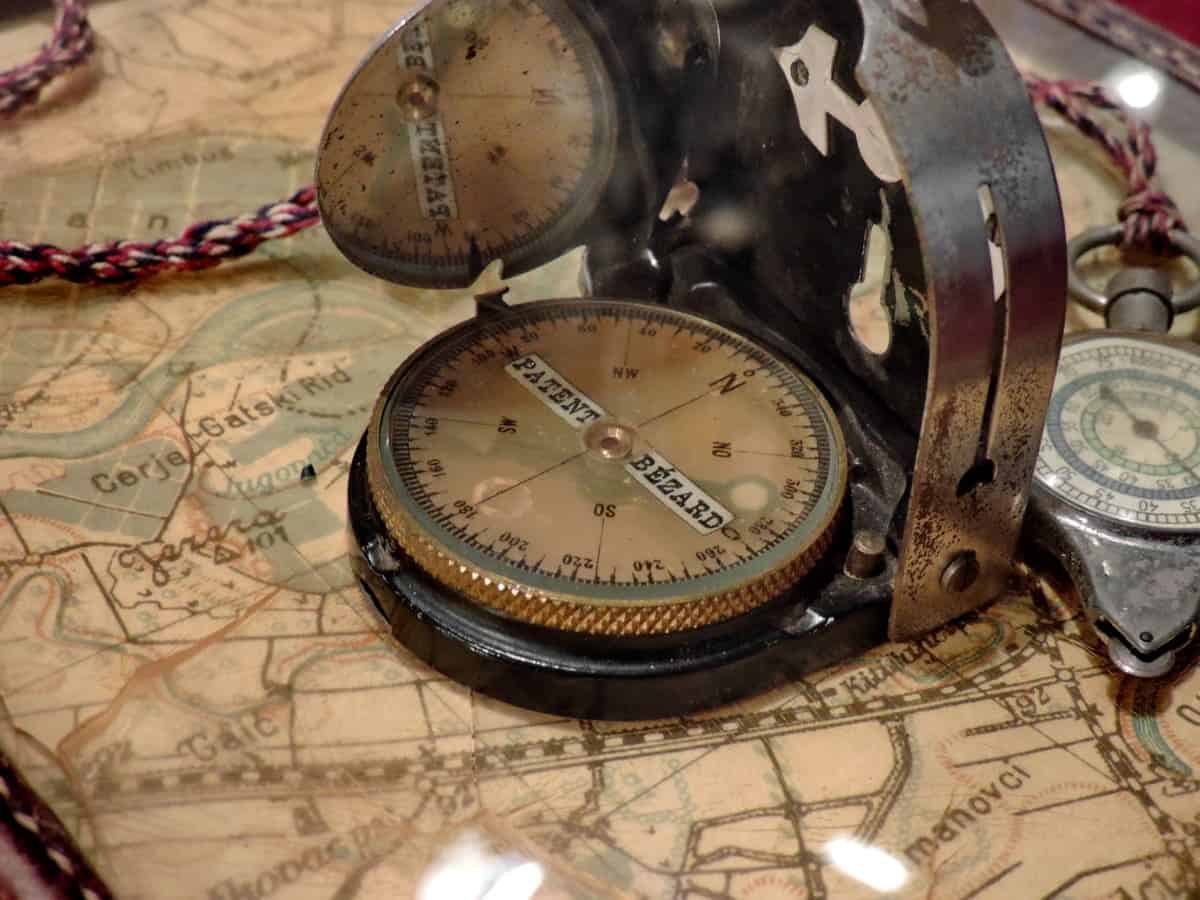 Although night vision technology is a handy way to view nocturnal wildlife, it was first developed for military strategy. A military force that can function in the dark, has a distinct advantage over troops that cannot.

NVDs were first developed by the German army around 1939. By the end of World War II, Germany had improved the technology enough to equip their Panther tanks and most of their ground troops with night optics.

At the same time, the United States was working on their own NVDs. The M1 and M3 infrared night sighting devices, also known as the “sniperscopes”, were in regular use by American troops at the end of the Second World War.

These early NVDs used large infrared light sources to illuminate targets. The units projected a beam of near-infrared light similar to the beam of a normal flashlight. However, the beam was completely invisible to the naked eye. The infrared beam would reflect off objects and bounce back to the NVD’s lens.

The earliest night vision technology is usually referred to as Generation Zero. Although it changed the course of modern warfare, Gen Zero devices had major limitations. They were heavy, cumbersome, and the images they produced were highly distorted. Enemy soldiers could also use their own NVDs to detect the infrared beam cast by other devices. 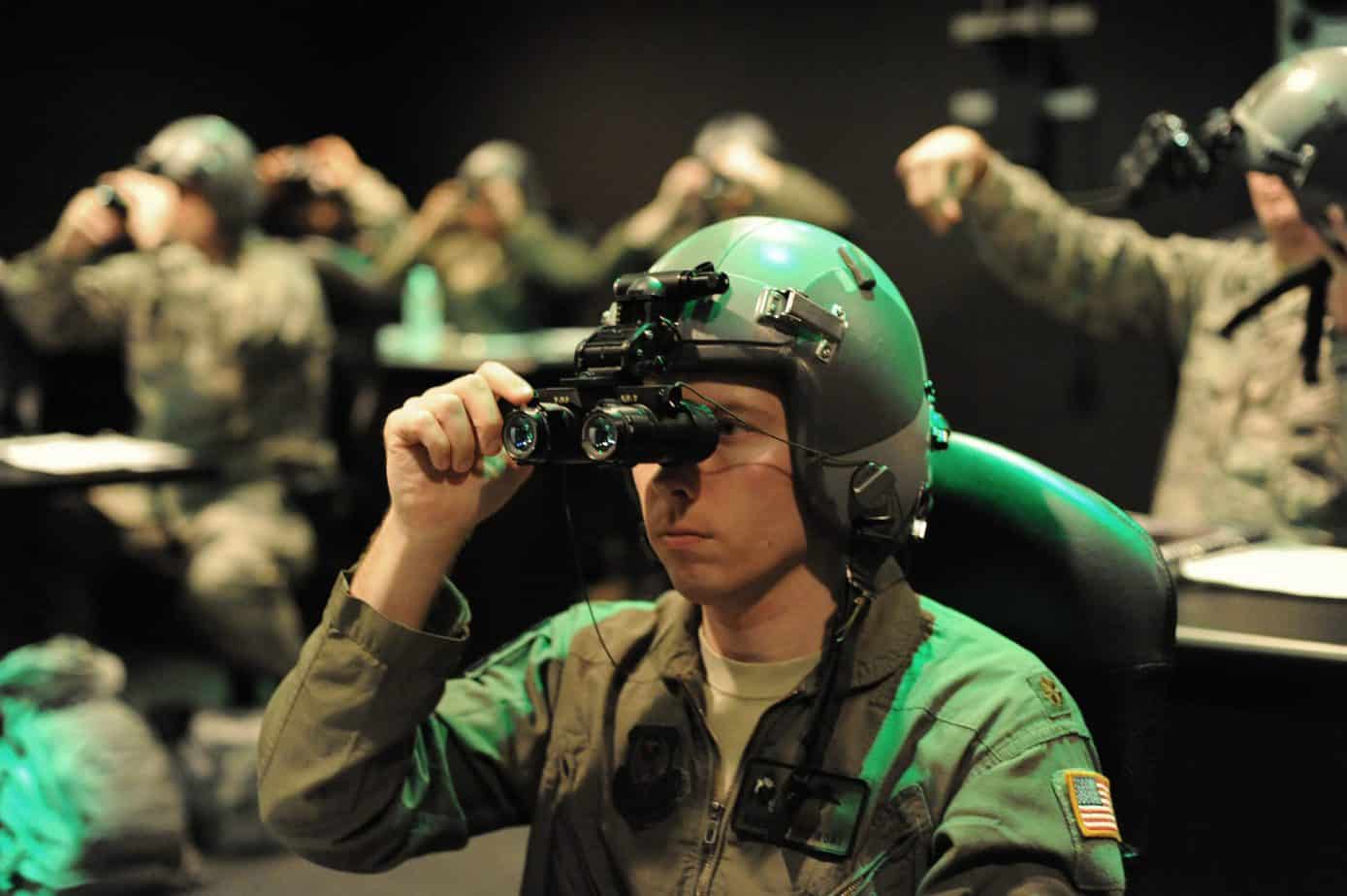 Generation One night vision devices were developed during the Vietnam War. Built on Gen Zero infrared technology, Gen One devices utilized passive infrared light. Rather than projecting a detectable beam, Gen One technology uses ambient light to amplify normal amounts of reflected infrared in the environment.

Gen One NVDs utilize the same type of intensifier tubes used in Gen Zero technology. These devices were still seriously bulky, incredibly expensive, and fairly impractical on the battlefield. However, the images were clearer than the images generated by their predecessors.

US Marine snipers used Gen One technology in their famous Starlight Scopes, allowing them to detect movement in the dark and providing a slight tactical edge over the Vietcong.

Generation Two devices feature an improved image-intensifier tube, which utilized a micro-channel plate with a photocathode. While that might sound like a foreign language, it basically means Gen Two NVDs provide better image resolution.

Smaller and more reliable, Gen Two technology allows the user to see in extremely low light conditions, like those on a cloudy or moonless night. . 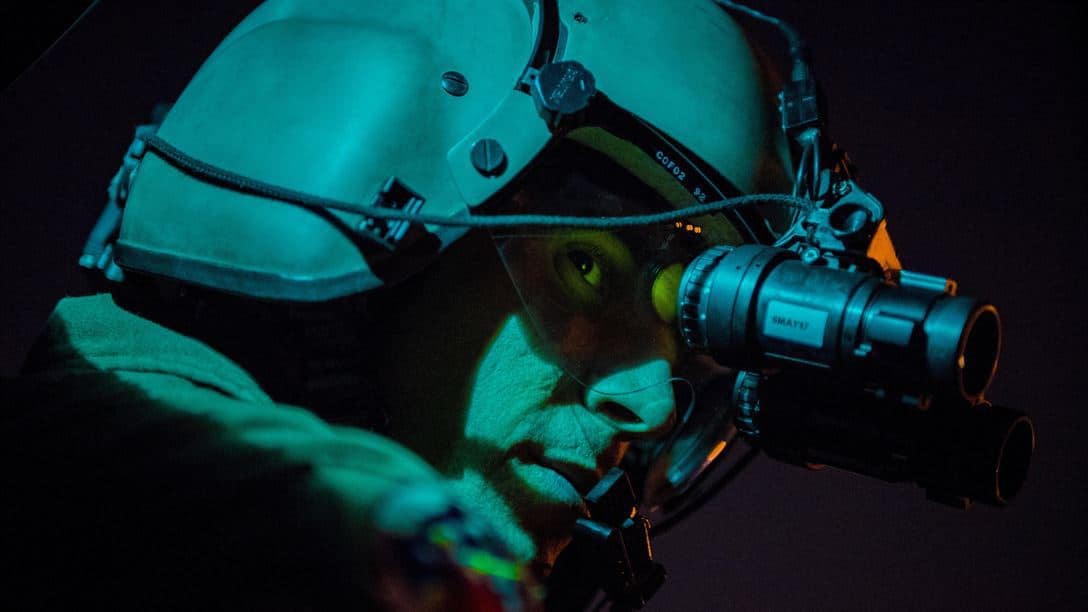 Gen Three is the night vision technology currently used by the United States military. Improvements include reduced power consumption and an increase in light amplification by up to 50,000 times.

Gen Three NVDs use the same micro-channel plate as Gen Two. However, the original photocathode has been replaced with a new cathode that uses gallium arsenide. Gen Three NVDs also feature an additional ion barrier coating over the multi-channel plate. The coating is designed to increase the lifespan of the device.

While some companies may claim their NVDs are Gen Four technology, there is no such thing. The military has yet to define Gen Four night vision technology. Manufacturers claiming the Gen Four label are probably Gen Three Plus.

One benefit of recent advancements in night vision technology is that NVDs have become much more affordable. In years past, civilians wanting access to night vision needed to fork out tens of thousands of dollars for even the most basic device. Today, basic NVDs are available for a few hundred.

Spending a little more on quality usually pays off in the long run, both in durability and performance.

Here is a quick run-down of the different types of NVDs on the market today. 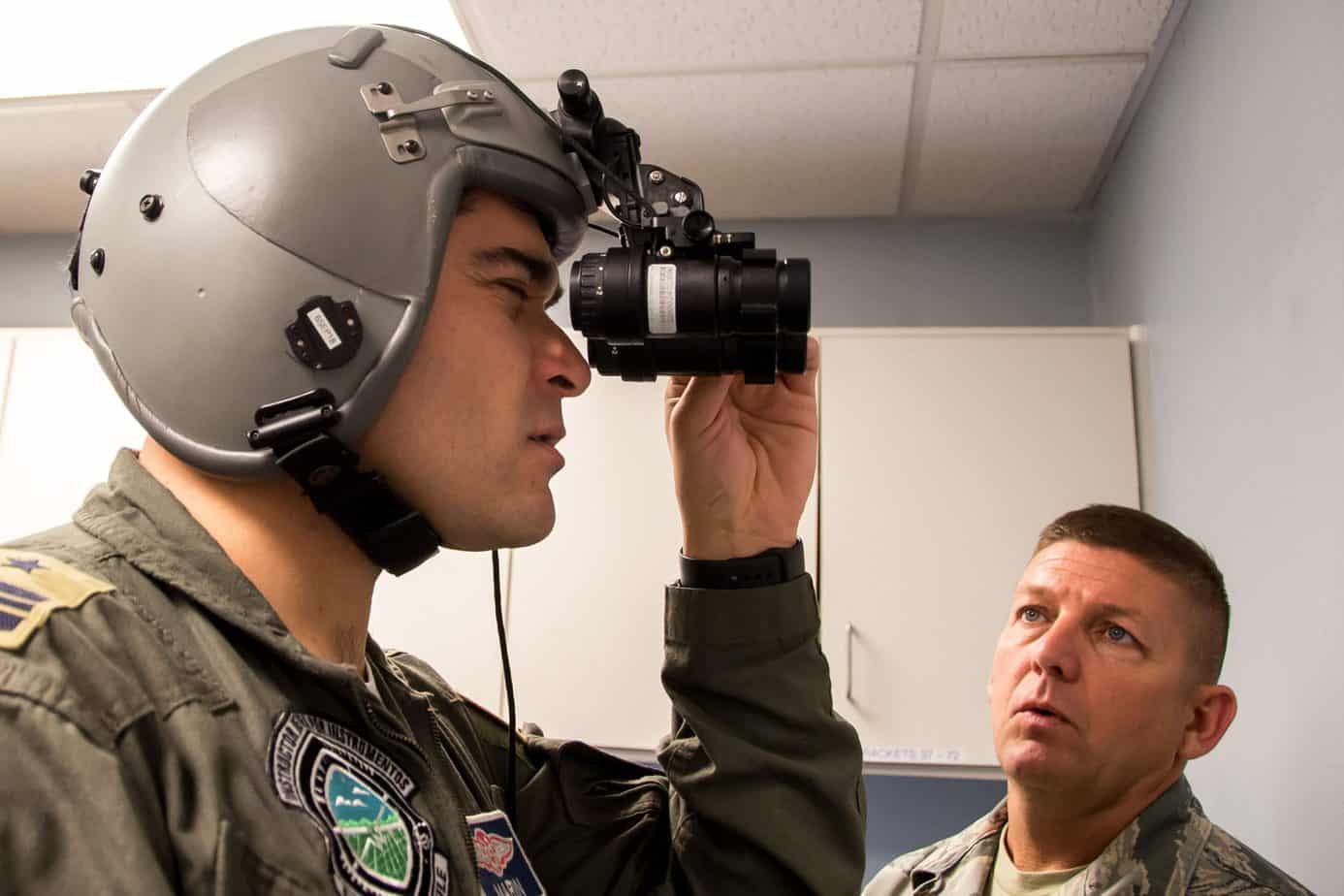 Monocular night vision devices are probably the most common type of NVD.

These single lens NVDs can be used manually by holding them up to one eye like a telescope. However, they are more regularly attached to a “skull crusher” or mounted to a helmet, allowing the user to have both hands free.

The basic design of night vision goggles is mostly the same as that used in monocular devices. The single major difference between these two styles is that amplified light is emitted through two eyepieces rather than one. This allows you to view the images with both eyes, making them easier for your brain to process.

Some goggles have two eyepieces that allow the user to view the image through a single image tube.

Other more expensive night vision goggles feature two eyepieces, each with their own image tube. This type of dual image tube, is also known as stereo vision. 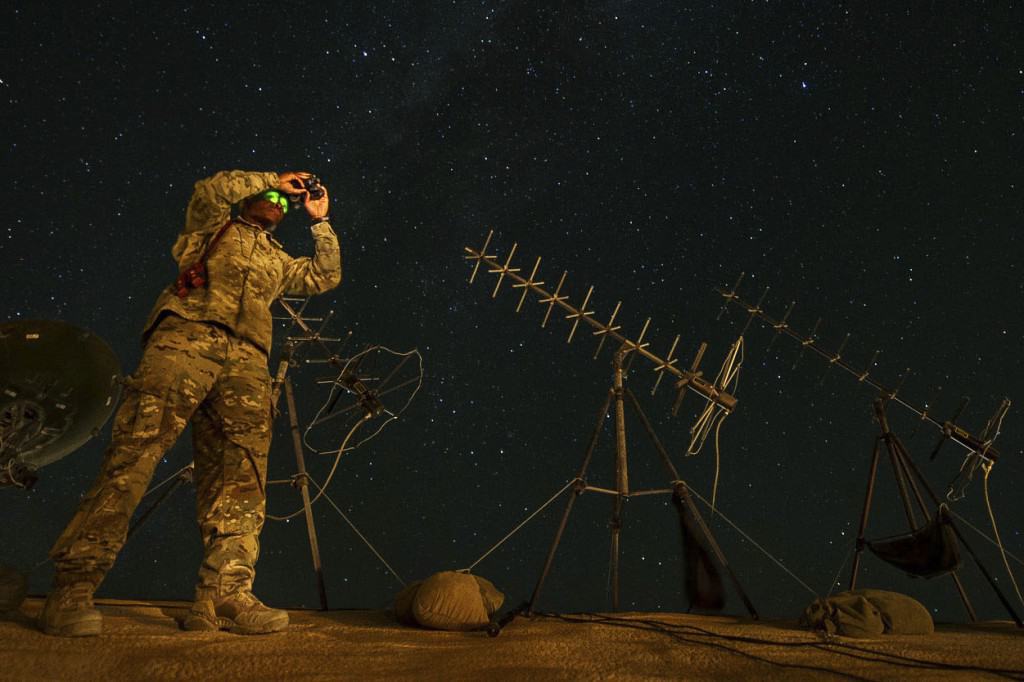 Night vision binoculars use the same technology as night vision monocular devices and goggles. They may use a single image tube, or multiple image tubes, although both types  usually feature two eyepieces.

The primary difference between night vision binoculars and goggles is that binoculars magnify the image. Most models have a fixed magnification, meaning that the viewed image is always “zoomed in.” This can be disorienting for users who need to be mobile while using their NVD.

If you want to use your rifle for daytime and nighttime shooting, a day/night system may be the perfect solution. The system typically consists of a regular scope and an NVD that mounts to the rifle directly in front of the scope’s objective lens. The NVD obviously provides the night vision technology, while the scope provides magnification and a reticle for aiming.

This type of system allows you to shoot with the regular scope during daylight hours. After the sun goes down, you simply attach the NVD in front of the scope, and you’re good to go.

Although the latest, cutting-edge night vision technology is priced well out of reach of the average consumer, there are plenty of affordable high-quality options out there. However, even basic Gen One NVDs can require a significant investment (especially if quality is anywhere on your list of desired specs).

Night Vision technology is incredibly complex. This article simply scratches the surface of night vision technology, and it is a relatively shallow scratch. Consider the basic information contained here as a starting point to better understanding of the types of NVDs available to modern consumers.