All the Pistol Competition Types Explained

Are you looking to sharpen your skills with a pistol? Want to challenge yourself against other shooters? Competition shooting is the way to go. 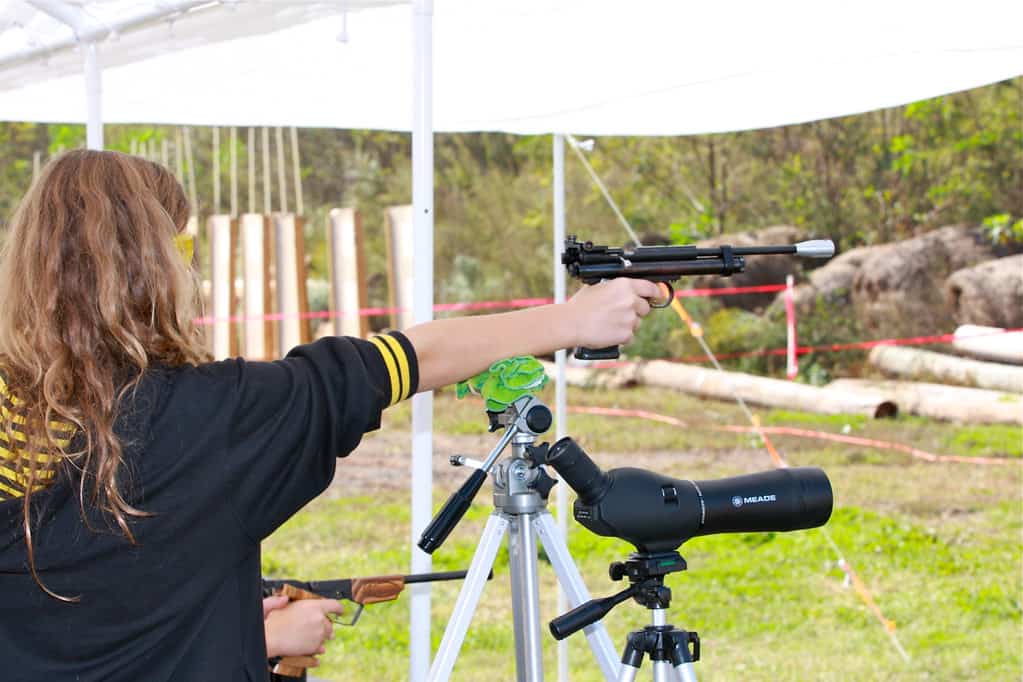 There are many types of pistol competition shooting disciplines available. Learn about each of them, find out which are the most popular, and determine which are the best fit for you. 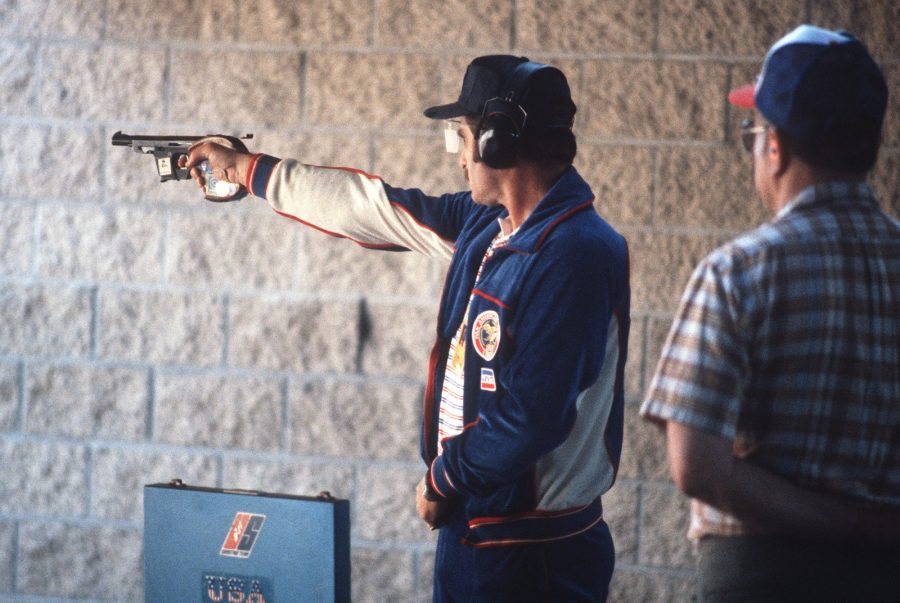 Plinking and practicing at the range is not just fun; it’s something every responsible gun owner should do regularly.

Unless you’re a very new shooter still developing basic proficiency, the purpose of range plinking is to practice and refresh your fundamentals. Think of plinking as preventative maintenance for your abilities; it helps keep your skills from decaying from lack of use.

If you want to test your skills and become a better shooter, competition shooting offers many avenues to do so. Every discipline is different, with varying focuses and emphases.

Whether you prefer static slow-fire accuracy or action-packed running and gunning, there is something for you. You also don’t have to play just one. Many dedicated shooters compete in multiple pistol shooting competition types, keeping their skills sharp in different ways. 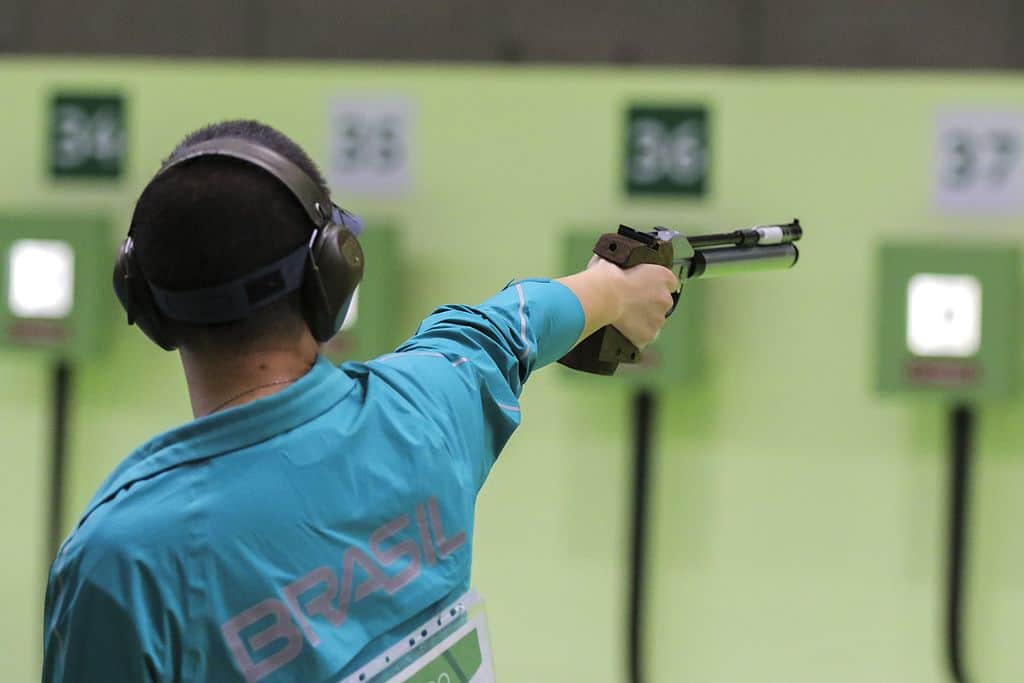 Discover the best and most popular pistol shooting competition types and determine which discipline is the best for you.

Handgun bullseye shooting is one of the most straightforward pistol competition shooting disciplines, mainly testing the shooter’s accuracy.

The basic principle of bullseye shooting is to score the tightest groups possible on a circular target placed at a specific distance. The circular target features various concentric circles, each worth a specific number of points depending on their proximity to the center.

You will also typically find an X at the very center of the target; this is the bullseye, also known as the X-ring or X-zone.

Glock pistols are among the most popular handguns among American shooters today. It should be no surprise that the Austrian gunmaker is sanctioning their very own official competition shooting scene.

GSSF matches are accessible; all you need is a Glock, plenty of magazines, and ammunition. Various GSSF divisions exist, depending on your level and your Glock pistol’s type and caliber.

Targets include both bullseye-style targets and steel targets at various ranges, from 5 yards to 25 yards. All strings of fire are timed (typically 15 to 25 seconds to shoot 5 or 10 rounds), placing additional pressure on the competitors.

Steel Challenge is all about speed, using steel targets instead of paper targets, and grading competitors on how fast they clear a stage instead of how tight their groups are.

Steel targets make audible noises when struck with a bullet (the “plink!” sound that gave birth to the term “plinking”), allowing range officers to determine with ease whether a competitor has successfully hit a target.

On a typical SCSA stage, a competitor must successfully strike every plate before them in any order as fast as possible, except for a special red plate called the stop plate. The shooter must hit the stop plate last to signal they have completed the stage.

Practical shooting is a subcategory of competition shooting. Although not exclusively reserved to pistols, these disciplines blend speed and accuracy, emphasizing the use of field-practical calibers.

Many different practical shooting sports and associations exist, such as NRA Action Pistol, IPSC, and IDPA.

The International Defensive Pistol Association (IDPA) was founded in 1996 by former USPSA shooters, believing USPSA shooting had become more about the equipment than testing the competitor’s skills. IDPA’s mission is to return practical shooting to its roots and focus on realistic equipment and simulated defensive shooting scenarios.

Since its inception, the Bianchi Cup is held yearly in Columbia, Missouri, on the week before Memorial Day.

Although each discipline is different, if you wish to compete in the pistol divisions of these sports, you will need the following equipment:

Most of these disciplines require your handgun to meet minimum Power Factor requirements. In NRA Action Pistol, the minimum is 120 for all guns.

In practical shooting, the competitor’s objective is to clear the stage as fast as possible, hit targets as accurately as possible, and avoid missing or hitting penalty targets.

Stage configurations vary depending on the discipline and stage type. Most of them employ two different target types. These are cardboard targets with different concentric sections (the smaller, the more points) and falling steel targets, which only require the competitor to hit it with enough accuracy to cause the target to drop.

Like practical shooting, Olympic-style shooting disciplines are not only for pistols but include many of the world’s most prestigious pistol shooting sports.

The governing body for all Olympic shooting events is the International Shooting Sport Federation (ISSF), founded in France in 1907.

Unless otherwise noted, ISSF pistol disciplines typically require specialized .22 Long Rifle Olympic pistols. Each event has its own rules and is segregated by gender unless competing in a Mixed Team division.

Whether it’s static slow-firing or high-octane running-and-gunning, dedicated competition guns or stock pistols, paper or steel targets, there is a shooting sport for everyone.

Competition shooting is an excellent test of your skills and a great way to push yourself continually. But most importantly, it’s about having fun while practicing your favorite hobby.

Why is Glock 19 so Popular?