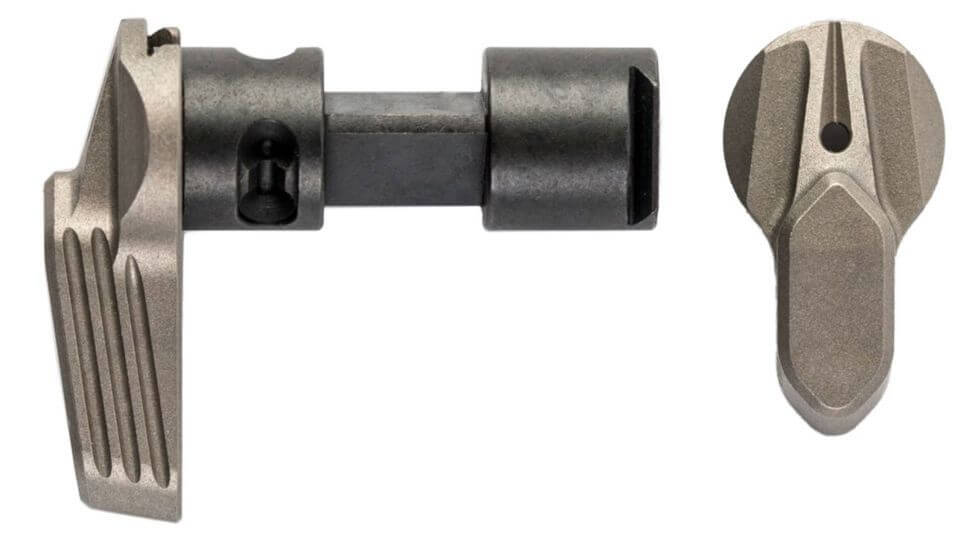 I realize that the headline of this review is a bit click-baity. It’s also a strong claim. But I feel pretty confident that it’s true.

Yes, other safety selectors are perfectly usable. And many of them work very well. They just don’t work quite as well as the Radian Talon Safety Selector.

Here’s what I’ve concluded from my experiences running the Talon on a few rifles.

As you may or may not know, I’m a left-handed shooter. So I’m basically a special needs shooter when it comes to AR-15 components. I’m also not that smart, which means that the ambidextrous stuff also needs to be stupid simple.

That’s why the Talon is so awesome. It’s stupid simple, but it works very well.

Let’s talk about that.

This is my obligatory madman raving about the finish. I’m a bit of a stickler for a clean finish on AR-15 components. So, when a part has a nice quality finish, I like to point it out.

…The Radian Talon has an awesome finish.

Best of all, it’s durable. It takes a lot of wear and tear to get down to the silver surface on a Radian component. And the safety selector doesn’t have to put up with all that much wear. So this selector holds it’s dark black color basically forever.

Also, Radian has taken care to ensure that the finish doesn’t interfere with the fit. I’ve never had a Talon selector that had any stickiness or excessive tightness inside the lower receiver or on the joints for the throw levers.

I’m too cheap to buy a Radian receiver set. But Radian produces some of the best anodized finishes on the market. And that finish looks great on the Talon.

Another thing about this safety selector is the way it goes together.

I’m not a huge fan of ambidextrous safety selectors that use a screw or screws to secure the throw levers to the barrel.

Don’t get me wrong. Safety selectors with crews are fine. But the screw could come loose. And I’m paranoid. So I prefer the pin system that Radian uses on the Talon.

The Talon uses pins to secure the throw levers to the barrel. It’s basically impossible for the ambidextrous throw levers to work loose. Maybe it’s possible. But I don’t see how.

Also, the pin system is actually quite user friendly. No, it’s not as easy as undoing a bolt. But, if you need to take your safety off for some reason, it’s not that hard to depress the pin and slide the throw lever off. It’s almost as easy as loosening a bolt.

The only real downside to the system is that you need something that will depress the pin. Radian includes a disassembly tool in the package. But I promptly lose it once I get the selector installed. A paper clip or something similar works as a replacement.

Overall, all the mechanical design aspects of this safety selector are awesome.

All the finish and design stuff is nice. But how well does it work?

The long throw lever is long enough and wide enough that it’s super easy to disengage your safety with your thumb. And the short throw lever is short enough not to get in the way of your firing grip, even if you use it in a 90-degree configuration.

Speaking of the configuration, the Talon can be set up for either a 90-degree throw or a 45-degree throw.

I’ve never had an issue with the 45-degree throw. But I’ve heard of people having safety issues with 45-degree safety selectors. And you can use this in a 90-degree configuration if you’re concerned about that.

In fact, the engagement is a bit too positive when you get the Talon out of the box.

This is my only complaint about this safety selector: you have to break it in.

When you first install the Talon on your rifle, you’ll notice that it’s pretty stiff. Usually, I find that it’s so stiff that I can’t re-engage the safety with my thumb. My thumb just isn’t strong enough when I’m pushing up on the selector. So I have to release my grip to put the safety back on.

I usually put a dab of grease on the safety selector detent to help loosen it up a little bit. But it still has to break in.

The good news is that it does break in. The more you run it, the better it gets. Eventually, it gets relaxed enough that you’ll be able to re-engage your safety with your thumb. However, I find that the engagement never gets soft. It stays super positive, even after it eases up a bit.

But that’s a minor complaint, really. Plenty of parts work better once they’re broken in. This one just happens to require breaking in before it gets super usable.

All the performance aspects of this safety selector pretty much nail it. And, if you get the standard model, it’s a surprisingly affordable safety selector.

If you look around, you’ll notice that the Radian Talon Safety Selector is about the same price as similar safety selectors. But the performance is better than most of the competing safety selectors.

In terms of performance per dollar, the Talon is pretty much your best value. It installs easily and securely. It works great. And it looks cool.

That’s why there’s no reason to get any other safety selector. There, I said it. Enough said.