Is the SB Tactical SBA4 the True King of Stabilizing Braces? 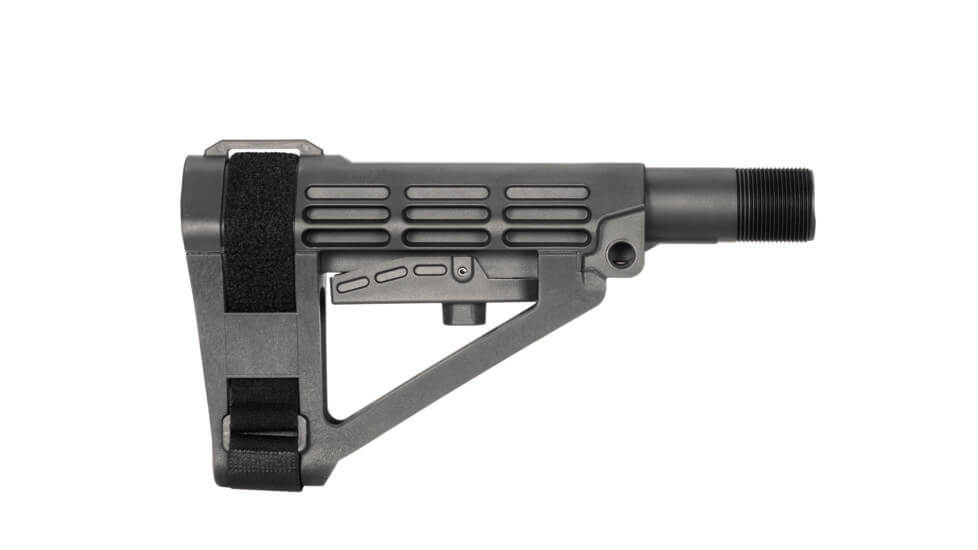 If you’ve read my SBA3 brace review, you know that I’m a big fan of that brace. And, when I first picked up the SB Tactical SBA4 Stabilizing Brace, I didn’t think I’d like it as much as the SBA3.

I hated the SBM4 brace. And the SBA4 brace looks suspiciously similar to the SBM4. So I was skeptical about the SBA4, at first.

However, after shooting with it for a while, I’ve concluded that it’s an awesome brace. Maybe better than the SBA3.

They’re both great braces, though. So it’s tough to definitively say that one is better than the other.

But I’ll see if I can at least make the line between the two a little more defined.

SB Tactical SBA4 Stabilizing Brace Review: Like a Stock, But Not

Look, when you accidentally put the butt end of your pistol into your shoulder and fire off some rounds, you want those unintentionally fired rounds to hit the target. Otherwise, it could be a safety issue.

So, even though your brace is for stabilizing your pistol during one-handed shooting, it’s still important that your brace helps you keep the rounds going in a generally safe direction when you make whoopsie and shoulder your pistol.

That’s why the SBA3 and SBA4 braces exist: for safety. Let’s have a look at how safe this brace is.

Just like the SBA3, the SBA4 is designed really well. SB Tactical does strong work.

Functionally, the design is outstanding. However, there are certain design elements that you may not like. Let’s talk about the good stuff first.

The SBA4 has the same two piece construction as the SBA3. The body is polymer. The lower brace portion is rubber.

This two piece construction is why I think the SBA4 is worlds better than the SBM4 (not to be confused with the SBA4).

The SBM4 has a rubberized body. When I accidentally shouldered my pistol with the SBM4, the rubberized body snagged on my face, which was super uncomfortable.

In contrast, the SBA4 has a polymer body, with cutouts that look a lot like the traditional M4 stock cutouts (the cutouts on the SBA4 are strictly to reduce weight. It is not, in any way, a stock). The polymer body does not pull on your face during unintentional shouldered firing. 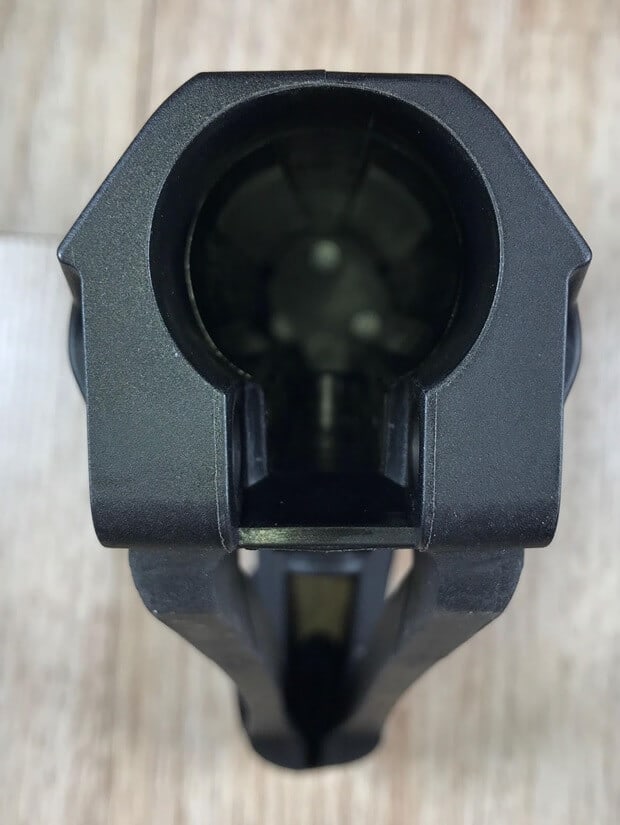 Also, the SBA4 has a wider body than the SBA3. This is one of the design aspects that you may or may not like.

On the other hand, if you prefer very slim stock bodies—like the Magpul CTR or Bravo Company BCMGunfighter Mod 0—you may want to stick with using the SBA4 strictly as a pistol brace. No accidental shoulder firing for you.

But, say you do unintentionally jam this brace into your shoulder just before pressing the trigger, it will deliver a lot of stability and an impressively secure cheek weld. You’ll easily be able to keep your pistol pointed in a generally safe direction through multiple round strings of fire, and probably get all the rounds on target, even.

Or, if you’re using the SBA4 exclusively as a pistol brace, it also works very well in that regard, too. I’d argue that it might offer more stabilization for one-handed shooting than the SBA3. 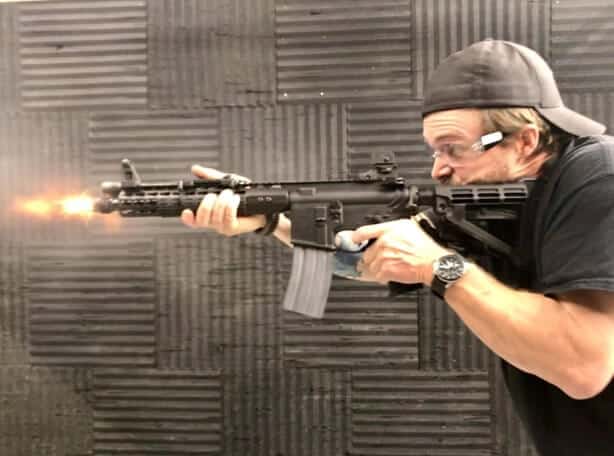 The rubber piece on the SBA4 seems a bit more rigid, thanks to the rubber supports that connect the rear of the brace to the front of the brace. Even though the arm strap is elastic just like the SBA3, the SBA4 seems to produce less muzzle bounce than the SBA3 in one handed shooting.

All in all, the brace design works really well for one-handed shooting. 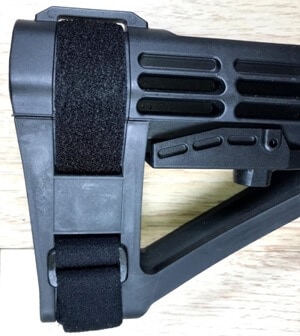 Last thing: The SBA3 looks super cool. The form factor gives your pistol a more traditional M4 or CAR-15 look. However, if you pair this with a more space age receiver set, it still looks pretty futuristic. Though, I’d say the SBA3 looks better on enhanced receiver sets.

Either way, though, the SBA4 looks cool. And looking cool matters.

All told, the SBA4 is very solidly designed. It’s one of the two best braces that SB Tactical makes.

So, the SBA4 seems designed well enough for all sorts of shooting. But how well does it perform?

I’ve accidentally gotten this brace into my shoulder a few times. And every time, the rounds went into the target, which is the safest direction.

Honestly, if I didn’t know this was a brace, I probably wouldn’t be able to tell the difference between the SBA4 and a standard stock. Admittedly, it’s not quite as comfortable in your shoulder (accidentally, of course) as a stock with a nice rubber recoil pad.

But the difference is slight. I’ve also used this stock on a .308 pistol. And it wasn’t unpleasant at all. However, for a larger caliber, like .308, I’d definitely prefer a true stock. But it’s totally fine for rounds like 9mm and 5.56mm.

In conclusion, if you happen to find the butt end of your pistol in your shoulder prior to pressing the trigger, the SBA4 will be safe and comfortable.

On the other hand, for one handed shooting, this brace is a true stabilizing brace. The rubber arm wrap is stiff enough that it stops the barrel from drooping. It doesn’t take all that much effort to keep your muzzle level while you shoot. That way your rounds won’t drop low. 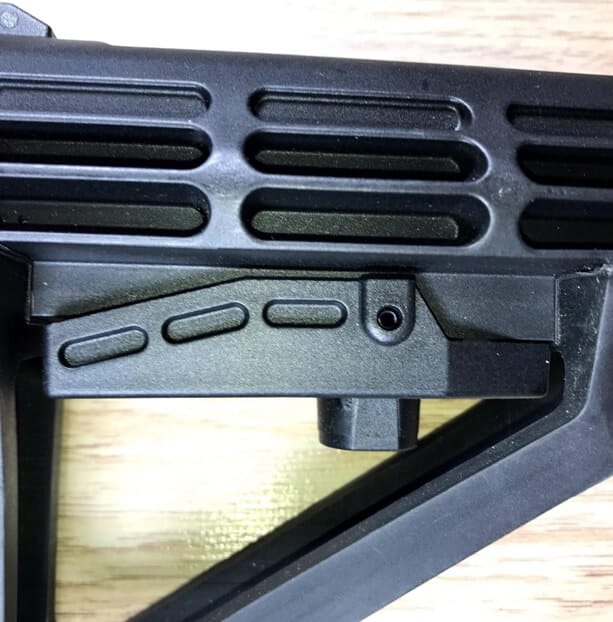 Last bit: the SBA4 is adjustable. It’s awesome, especially for people like me who have short little arms. Whether you’re shooting one handed or (unintentionally) from the shoulder, you’ll have good control over your pistol and, therefore, good control over where the rounds go.

Ultimately, the SBA4 delivers excellent precision and safety for your AR pistol. That’s what you want from any rifle component.

Bracing (To Pay for Tax Stamps on All Your AR Pistols)

When the SBA4 first came out, I didn’t think I would like it more than the SBA3. It seemed too bulky. And I wasn’t sure about the connecting strap between the vertical brace piece and the brace body.

But then I ran the SB Tactical SBA4 on several pistols. And I was super impressed. I will admit that the SBA3 may be the better option if you don’t like stocks with slightly wider bodies. If all your rifles have stocks like the Magpul CTR and BCMGunfighter Mod 0, you may prefer the SBA3.

On the other hand, if you tend toward stocks like the B5 Systems Bravo Stock or SOPMOD stocks, you’ll probably dig the SBA4. But you’ll have to check it out for yourself. You may be like me and realize that the SBA4 is far better than you expect. However, you won’t be disappointed if you have high expectations when you pick up the SBA4.

Can You Shoulder a Pistol Brace