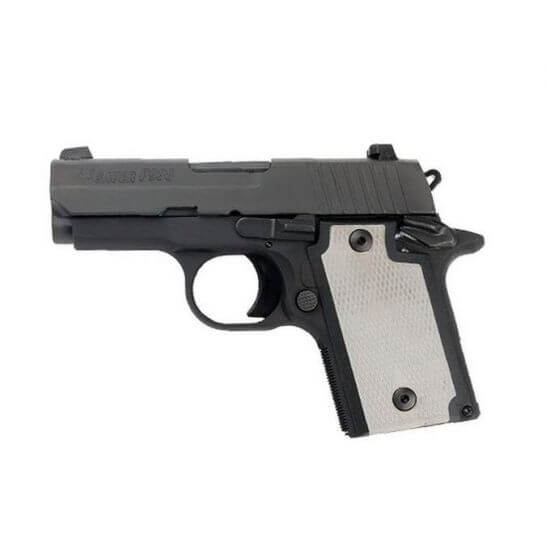 For many years, if you wanted a subcompact single-action only pistol, the options were severely limited.

The options are still fairly limited. But the Sig P938 ensures that there’s at least one GOOD option in the micro-1911 category.

Now that I’ve spoiled the surprise, let’s talk about just how good the P938 is.

This gun is aimed squarely at the concealed carry crowd. There’s just no reason to get a gun this small unless you need to hide it under your clothes.

That means it gets the concealed carry evaluation, starting with reliability.

Historically, small single-action only guns have had some reliability issues, especially with hollow point ammunition.

Sig seems to have come up with a solid solution to that problem: make a subcompact 1911 that works, even with hollow point ammunition. 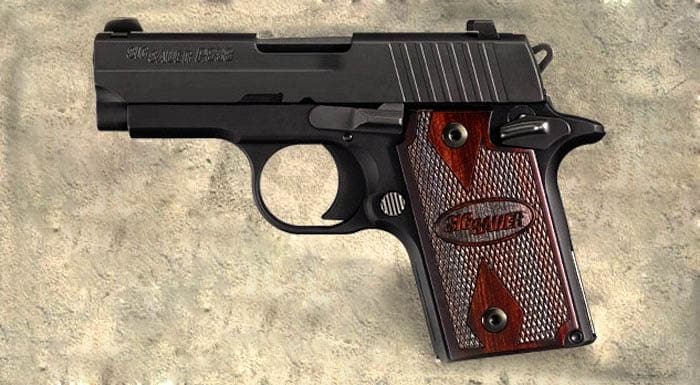 I’ve been really impressed with the reliability of this gun. It’s eaten any ammunition I feed it, even hollow point rounds, though I’ve only tried a few brands.

That’s about as good as things get when it comes to reliability. I’d still recommend running a couple hundred FMJ rounds and about 50 hollow points through it before throwing it in the holster.

But there’s no reason to suspect that this gun wouldn't pass that reliability test. Overall, the reliability seems good enough for defensive use.

This gun definitely prioritizes concealability over shootability. It’s small. And it only holds 6 rounds in the magazine.

Then there’s one more thing: it’s a single-action only pistol. So it’s got an external manual safety.

All in all, that means this gun isn’t the most efficient option for concealed carry.

First, the chances that you’d need to reload during a dynamic critical incident are relatively high. Seven bullets (six in the mag, one in the chamber) just isn’t that many.

You can carry it with an extended magazine, which raises the total to eight rounds. But that’s still not a ton of bullets. 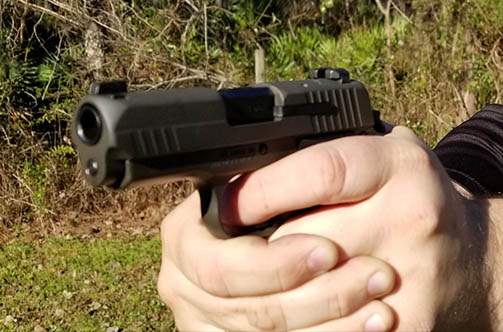 Then, it’s more difficult to control than a larger gun. I’ll get into how it shoots in a moment. But the grip is quite short. And, even though it has a metal frame, it’s still a fairly light gun. So it takes some effort to keep things tight through several shots of rapid fire.

So, is this the most efficient gun you can get? No.

However, two of the three issues with efficiency are related to the size of the gun. If you absolutely need a micro pistol—and you demand a single-action only pistol—low magazine capacity and controllability challenges come with the territory.

So, on that front, the Sig P938 is at least on par with any other gun in this category.

The controls on the Sig P938 are actually quite good. I’ve had no issues with them.

The safety actuates easily, and clicks over with a secure snap. And the slide stop is large enough that it’s easy to actuate. But not so large that it gets in the way when you don’t need it.

However, I’m left handed. So my thumbs don’t touch the slide stop when I shoot. Occasionally right handed shooters will ride the slide stop with their thumbs. Then the gun won’t go into slide lock when the magazine is empty.

But that’s mostly because this gun is so small. The slide stop is well designed and well placed. The P938 is just so small that your hands kind of swallow it up. So it’s tough to keep your thumbs off the slide stop lever.

Also, the safety selector is ambidextrous. As a lefty, I appreciate that. However, it’s also nice because you won’t be up a creek if you need to shoot weak handed. 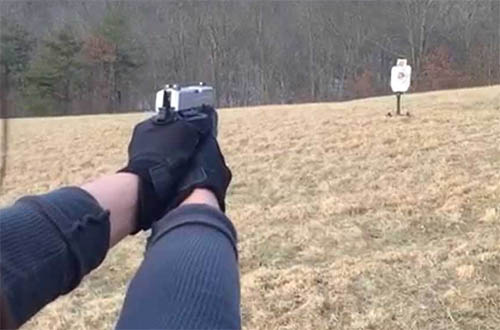 So you can run your speed reloads with this gun. Just make sure to move your pinky. Otherwise your pinky will keep the magazine from falling out of the gun and it will stop the fresh magazine from seating properly.

All in all, the controls are really nice, which you would expect from a 1911-style handgun. 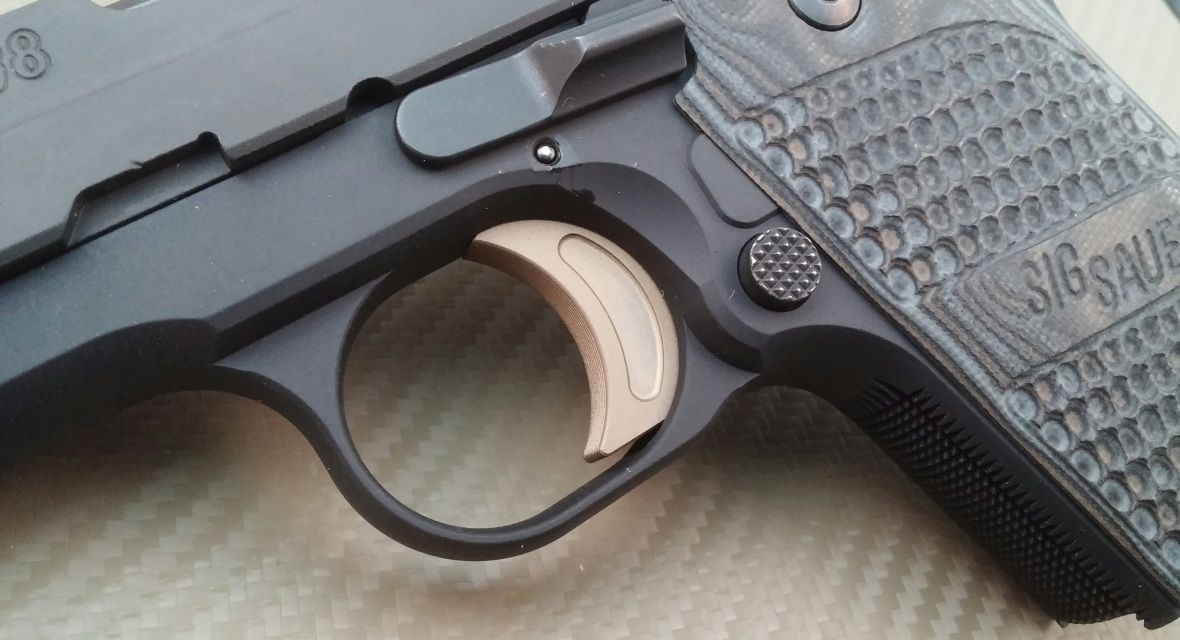 The trigger is kind of the star of the show here, isn’t it? It’s a single-action only pistol. So the trigger should be top notch.

And it is. There’s very little takeup, followed by a very sharp break, and almost no over travel.

I’m not picky about triggers. But, if you’re into great triggers, you won’t be disappointed by this one.

It’s not perfect. There is a tad bit of slack before you hit the wall. But it’s very minimal. And the trigger movement is smooth. So it’s really easy to get excellent precision from this gun. 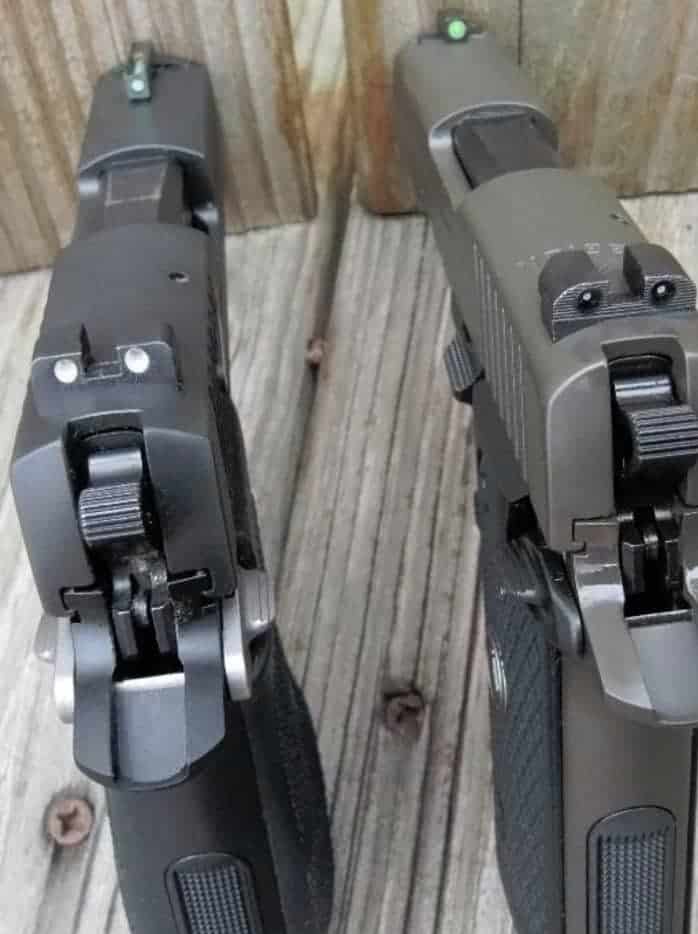 Most of the time, sights are sights. So they don’t always get their own section.

However, there’s something interesting about the Sig P938 sights: they’re the same size as the sights that come on a full-size Sig handgun.

They fit on the slide just fine. However, the proportions of the sights are designed for a gun with a longer slide. So there’s almost no light on either side of the front sight when you’ve got your sights lined up.

This can make it tricky to get the hits you need.

To be clear: the sights are totally usable. But I would swap them out for a set of sights with a narrower front post or a wider rear notch if this were my gun.

How Does it Shoot?

This is where the size of the gun really shows it’s true colors.

For a micro pistol, this gun shoots very well. Even with my pinky hanging off the grip, I found that it was manageable in strings of 3 to 5 rounds. I just had to slow down a tad to keep the last couple rounds on target.

So when you compare this to other micro pistols, the Sig P938 shoots great.

However, compared to guns that are just a tad larger, guns like the Sig P365 or the M&P Shield, this gun only shoots okay. Just a bit more length on the slide and a touch more grip length make more difference than you might expect.

But the Sig P938 grip is very well designed. And it’s completely metal. So it shoots exceptionally well, given the size. It’s not particularly snappy. It also never caused any pain, even after shooting a lot of rounds.

So, if you need a micro pistol for concealment, the Sig P938 is about as good as it gets. But, unfortunately, it can’t overcome physics.

My main gripe with this gun is the cost. Not that it’s overly expensive. But it retails in the ballpark of $700.

When you put it side by side with other Sig pistols, the P938 seems a bit pricey. But I guess metal isn’t free. And the P938 is far from the most expensive micro-pistol on the market.

So, overall, it’s a bit expensive. But it’s not unreasonably priced.

Overall, the Sig P938 addresses the most glaring issue of micro-1911 pistols: reliability. It’s a reliable pistol, which is good because it’s not great for anything other than concealed carry.

However, I would only recommend this gun to people who simply must have a single-action only pistol and that need a micro pistol for concealment.

If you can conceal even a slightly larger gun, there are better options (even if you want a single-action only gun).

And if you’re not partial to having a single-action only pistol, there are also better options.

BUT… For those of you who need an exceptionally concealable single-action only pistol, the Sig P938 is probably the best pistol on the market.