I know muzzle brakes are all the rage right now. But I’m not a huge fan of dedicated muzzle brakes. I understand why people like them. However, muzzle brakes produce a lot of muzzle blast. And I’d rather not deal with that all the time. 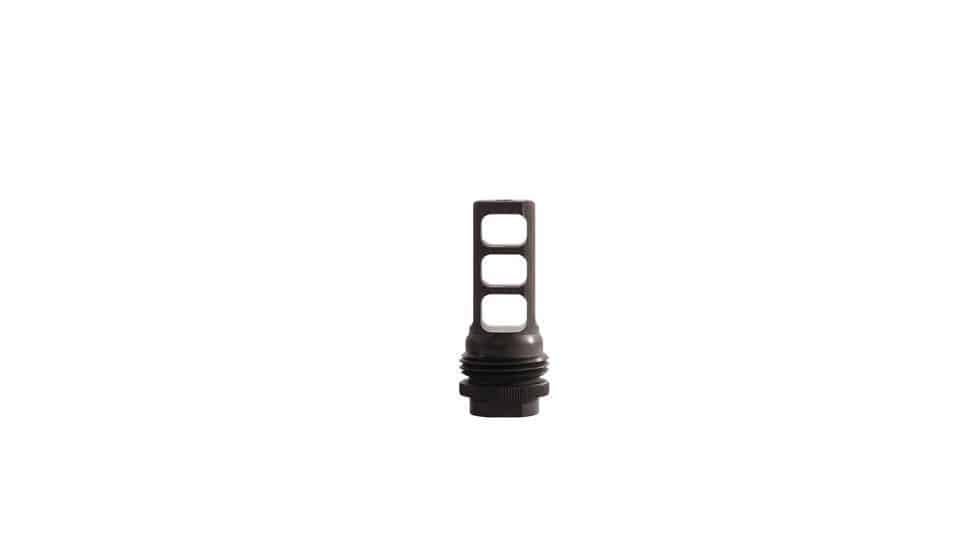 My workaround for the muzzle blast is the SilencerCo ASR Muzzle Brake. That way I can just slap on my can whenever I’m shooting on the indoor range or on a line with a bunch of other people. But I still get the recoil reduction when I’m shooting without my suppressor.

I’ve used several SilencerCo ASR muzzle devices. And I’ve abused them pretty thoroughly. This is less of an exploratory review and more of an explanation of why I think the SilencerCo ASR Muzzle Brake is an awesome choice and where its limitations are.

I’m not sure exactly what kind of steel this muzzle brake is made of. But it’s strong.

We actually got an ASR Flash Hider hot enough to melt it. A customer blasted like 20 mags of full auto through a SilencerCo suppressor.

This one got way too hot. It still works, though.

The muzzle device got hot enough that the metal got soft and blistered. We straightened it out and let it cool down. And the muzzle device still works on that full-auto rifle today. It didn’t get brittle. And even the black nitride finish held up to some extent.

That makes me pretty certain that the SilencerCo ASR Muzzle Brake will hold up through all sorts of hard use, since most of us don’t have full-auto rifles.

But, even without mentioning the ASR mount, the construction and attention to detail on this muzzle brake is obviously top notch.

There’s some good and some bad here.

But it’s evidence that the finish is incredibly strong.

And the finish resists carbon fouling pretty well. It seems that this muzzle brake collects less carbon than many other muzzle devices I’ve used.

The next aspect of the fit and finish that I noticed is the threading for mounting the muzzle brake to your barrel. The threading is incredibly smooth and well finished. This muzzle device threaded on super smoothly and easily.

My only complaint about the fit is the shims.

If it’s necessary to use shims for a muzzle brake, so be it. You can use a crush washer for a compensator, though. And that must be timed. So why not use crush washers for muzzle brakes?

But I digress. My problem with this muzzle brake is that I’ve occasionally found it difficult to time the muzzle brake with the included shims. Either the shims were too thick or too thin. And I ended up having to pretty much overtorque the muzzle brake to get it properly timed.

It’s not a huge deal. I just used a bigger wrench. And this hasn’t been an issue with every ASR muzzle brake I’ve installed. It might just be a slight mismatch between the threading on the brake and the threading on certain barrels.

But you don’t have these sorts of issues with a crush washer. That’s all I’m saying.

Either way, my one complaint about the fit is pretty minor. Timing muzzle devices with shims is always kind of a pain. So I might have this complaint about any other muzzle brake.

Putting my minor gripe aside, the fit and finish on this muzzle brake is outstanding. It installed (mostly) flawlessly. And it requires very little cleaning and maintenance. That’s about as much as you can ask for from a muzzle brake.

It might be tough to see. But that shim is SMASHED.

Obviously, the primary feature of this muzzle brake is the ASR suppressor mount.

Here’s my one sentence opinion of the ASR mount: it’s one of the best—if not the best—suppressor mounting system on the market right now.

It’s super simple and easy to use. It’s absolutely secure. And it’s nearly impossible to get a false positive with the locking mechanism.

Also, referring again to the ASR Flash Hider we melted, we melted an ASR muzzle device. And the ASR mount still works! We didn’t even have an issue removing the suppressor after getting it hot enough to melt the muzzle device.

I know that this is a sample size of one.

But we use a lot of SilencerCo suppressors on rental guns at the range. And the operation is almost always flawless, despite how badly we beat them up and how often we burn them down on full-auto guns.

They very rarely even get carbon locked. That’s not to say that it can’t happen. But it takes a lot of abusive shooting to lock up the ASR mount.

So, in short, I’m convinced that the ASR suppressor mount is an amazing mounting system.

Obviously, you can only use SilencerCo suppressors with the ASR system (there may be other manufacturers that produce ASR compatible suppressors. But I’m not aware of them).

All in all, the ASR mount gets two thumbs up from me.

My observations here are pretty straightforward.

In terms of recoil reduction, this is a good muzzle brake. However, there are dedicated muzzle brakes that perform better.

I will say this, though: the only muzzle brakes that offer better recoil reduction are dedicated muzzle brakes. The other muzzle brakes with suppressor mounts feel about the same, or even slightly worse.

Allow me to make this recommendation, though:

Use this muzzle brake, even if you don’t have a suppressor right now and you just want recoil reduction.

This muzzle brake offers plenty of recoil reduction for typical AR-15 rounds. It might not be the very best. But it’s good. You’ll get a very controllable rifle. And, it saves you a bit of money if you decide to get a suppressor down the road.

Additionally, using a muzzle brake with a suppressor mount is especially valuable if you need to pin and weld your muzzle device.

It’s good enough that I pretty much use some variation of the SilencerCo ASR Muzzle Brake on all my rifles, at this point. That way I can slap one of my SilencerCo suppressors on any rifle I have. And I have very little need—if any need—to swap muzzle devices in the future.

That’s my two cents on why using an ASR muzzle brake is a great idea.

But, in fairness, here’s a counterpoint:

If that’s your situation, allow me to recommend the SilencerCo ASR Flash Hider. That way you can still get a suppressor down the road, if you change your mind.

That’s all I have to say about that.

As you may have guessed, I think the ASR muzzle brake is an amazing muzzle device.

It performs well as a dedicated muzzle brake. And you can pop a suppressor on it, if you need to muzzle the muzzle blast.

The only thing to watch out for is timing it with the shims. You may need a pretty sturdy upper receiver vice block to get this muzzle brake properly timed. But that may just have been a product of the barrel I mounted this SilencerCo ASR Muzzle Brake on.

In the end, I think that you’d be hard pressed to find a more versatile muzzle brake that offered better recoil reduction than the ASR muzzle brake. It could easily be the only muzzle device you need.