STNGR Handguards: The Best Handguards for the Money?

We’ve been banging on a few STNGR handguards down at Reno Guns & Range for a couple months now. And they’ve held up remarkably well.

If you want the short version of this review, here it is:

Now, they’re not perfect. But nothing ever is.

But I’ve been pretty impressed with these handguards. And I really like the quality-to-price ratio.

I do have a gripe or two about the STNGR handguards. And we’ll get to those. But I like to start reviews with the good news.

Here’s what STNGR has really gotten right with these handguards: 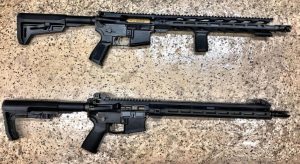 We have three. But one is out for Cerakote.

When I got these handguards, the first thing I did was take one of them and mount it on a rental gun. That might sound odd. But hear me out.

Our range is just across the California border in Nevada. So our AR-15s run a LOT of rounds because there are a lot of people from California who come over to shoot an AR-15 with a detachable magazine AND a pistol grip.

The rifles are constantly going on and off the range. When parties show up and rent a bunch of guns, those guns often get piled into a cart on top of each other (with the actions locked open).

So the guns get abused in a way that I probably couldn’t even replicate on my own. We’ve broken guns from every manufacturer—Christen Arms, Knights Armament, POF, Daniel Defense, and a whole bunch of others.

If a gun survives life at our rental counter, it’s remarkably durable.

That’s why I put this handguard on a rental gun: to see how it would hold up to much more than ordinary abuse.

And the results were good.

The finish held up very well.

And the handguard never bent or warped. The sights stayed zeroed for as long as we were slapping it around. When we pulled the handguard off to mount it on a different rifle, there were no fit or alignment issues.

So, I’d say the STNGR handguards check the durability box. At least, I’d never treat my own rifle as badly as we treat rental rifles. And I expect that you’d never experience any durability issues in ordinary personal use.

This might seem trivial, but I really appreciate the styling on the front end of the STNGR handguards.

For whatever reason, most manufacturers just use a flat cut on the front end. There are surprisingly few options if you want any styling on the front end of your handguard. STNGR has kindly addressed that issue.

The front end cutout on the HWK handguard is a little bit aggressive for my taste. However, it looks cool. I can’t deny that. 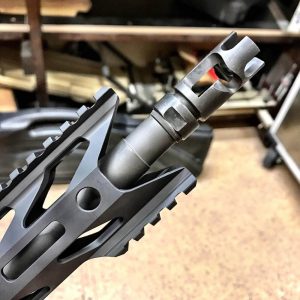 Looking cool is half the battle.

I prefered the more mellow design of the VLCN handguard.

It also looks cool. But it’s not so aggressive that you couldn’t use it on any build. I think the VLCN is one of the best looking handguards you can get right now.

Speaking of the VLCN, I also really like that it has the scout rail. I like to mount my lights at the 1 or 2 o’clock position. So having a rail in that spot is perfect.

My only complaint about the VLCN is that it’s not available in KeyMod (or they just haven’t had any KeyMod models in stock for me to find).

Say what you want about KeyMod. It works. It’s easy to use. And I like it. So, STNGR, please make a VLCN handguard in KeyMod. Thanks!

Moving on. The mounting system is another aspect of the design that I found to be excellent.

First, these handguards are ridiculously easy to install.

STNGR includes a wrench in the box. But you could install these handguards with a large adjustable crescent wrench. And that’s rad, because not everybody has an armorer’s wrench.

But the barrel nut is just very user-friendly, which is pretty rare on handguards. 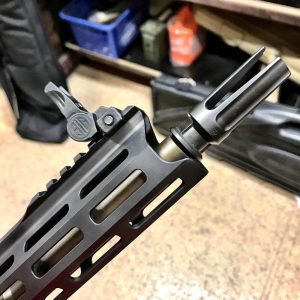 This is one of the best looking end cuts around.

Also, all the STNGR handguards have a spacer for the locking screws, which is pretty standard. But the spacer has a tab that matches up with a notch on the barrel nut. The tab keeps the handguard in place. It’s a more secure method than using just friction to lock onto the barrel nut.

It’s a very well designed system. It locks up securely, and it’s easy to install, which is pretty much everything you need from the locking system on a handguard.

In other news, all the other aspects of these handguards worked out perfectly.

The QD sockets were well placed and worked fine for a 2-point sling configuration. 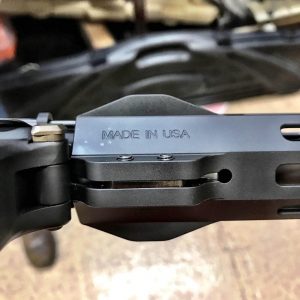 I forgot to take a picture before we put the handguard on. But the spacer is in there. Also: MADE IN THE USA

And the 6 o’clock rail on the HWK handguard was actually more useful than I anticipated. It’s a good place to mount a light (as STNGR said it would be), because it sits so far forward compared to the 3 and 9 o’clock positions on this handguard. You just need a remote switch for this configuration.

Short story here: the ergonomics of both handguards were excellent.

I liked the VLCN best (probably because I have small hands). But the HWK handguard was also outstanding. The HWK just felt a bit bulkier because of the Picatinny rail.

The main thing that made these handguards really comfortable to use was the diameter. I found that the diameter worked perfectly for a thumb-over or a thumb-forward grip, with or without my handstop installed.

My only complaint about the HWK and VYPR handguards was that the lightening cuts at the diagonal positions (1 and 11 o’clock) were pretty large. And if I used a thumb-forward grip, my thumb would stick into the holes of the lightening cuts.

Obviously, that’s not an issue with a thumb-over grip. And it’s probably not an issue for people with larger hands. It’s just something to be aware of if you put your thumb on the lightening cuts when you grip your handguard.

That small thing aside, everything else about these handguards was outstanding from an ergonomics perspective.

Gripes: Only Minor Ones

As I mentioned at the start, these handguards aren’t PERFECT. They’re excellent. But we did find a few things that could be improved.

Before I go on, though, I want to be clear that none of these complaints are deal breakers. I had to nitpick to come up with any complaints. But, technically, it’s my responsibility to nitpick in these reviews.

So, here’s what I found to complain about:

This might have been our mistake. But it seemed that each handguard had its own barrel nut.

But, oddly, we couldn’t get the handguards to fit on any barrel nut but the one it came with.

I imagine that this wouldn’t be the case if you had two of the same handguard. For example, two VLCN rails would probably be swappable without removing the barrel nut.

We were trying to use the same barrel nut for different handguard models.

To be fair and balanced, this probably doesn’t matter AT ALL to an ordinary shooter. Regular people simply don’t try every configuration possible with multiple handguards.

But we have a gunsmithing shop. So we tried it. Now we know:

If you have two rifles with two different STNGR handguards, you’ll need to move the barrel nut if you want to move the handguards.

This isn’t even a real downside to these handguards. So that’s enough about that.

I think this was the only true issue we found.

It was never a function issue. We mounted whatever optics we wanted without any trouble. 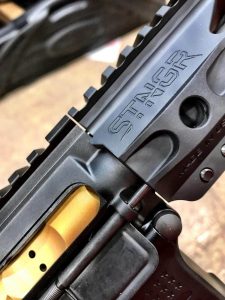 It’s a small gap. And it doesn’t affect function.

To be fair, we only tested these handguards on Aero Precision upper receivers (both the M4E1 and the standard AR-15 upper). So I’m not sure if you’d have the same gap on an upper receiver from a different manufacturer.

STNGR does state that it requires modification to mount their handguards on a billet upper receiver. But, as far as I know, Aero Precision uses forged upper and lower receivers.

It’s hard to spot the gap from any reasonable distance. But if you get up close, you can tell. This gap showed up on all three handguards, the HWK, RPTR, and the VLCN. The gap was largest on the HWK, but still not large enough to be an issue.

That tiny fit issue is the only real problem we found with the STNGR handguards. And it IS a tiny issue. Many people might not even notice.

So, all in all, the fit and finish is excellent.

The installation process is mind-blowingly easy. The barrel nut lockup is super secure.

And the ergonomics and shooting experience are great.

Admittedly, I was a bit skeptical when I first unboxed these handguards.

But my skepticism was wrong. I’ve been really impressed with the STNGR handguards.

So, I’ll eat my skepticism and repeat my original statement: for the money, these are some of the best handguards you can get.

Now, if they made a VLCN handguard in KeyMod, I’d probably use that for all my builds from now on. Just saying...