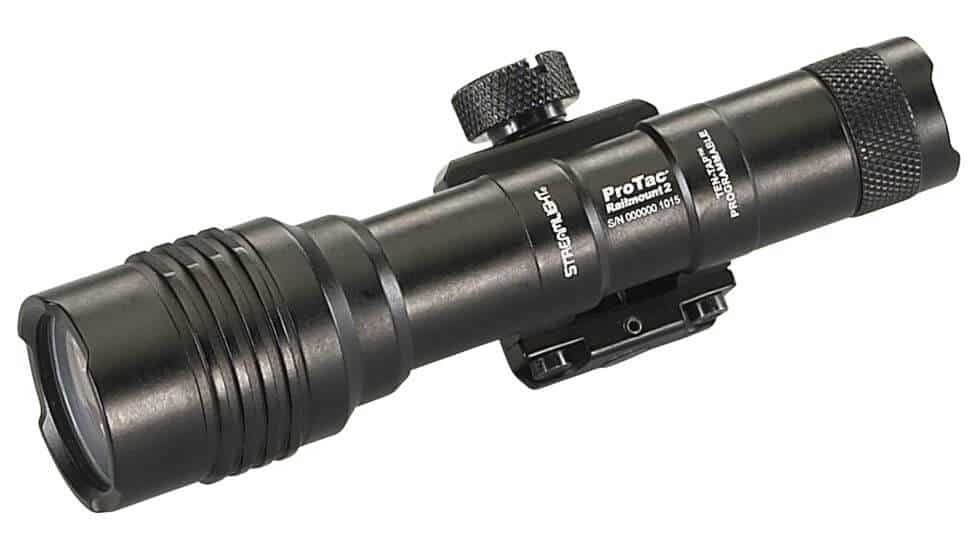 Weapon mounted lights can be pretty expensive. I understand why good lights cost as much as they do. And I never judge anyone for insisting on a more expensive light. But you can’t blame a guy for giving a more affordable light like the Streamlight PROTAC Rail Mount 2 a try, right?

It’s literally over a hundred dollars less expensive than some competing lights. If it works just as well, it’s an amazing value.

I have two PROTAC lights, which has given me a decent opportunity to evaluate it and see how it works.

Based on that experience, I’ve reached a few conclusions about the PROTAC Rail Mount 2.

Streamlight PROTAC Rail Mount 2 Review: How Many Lumens per Dollar?

The PROTAC is pretty much the only light in its price range that offers the level of performance that the PROTAC offers. There’s just not a ton of direct competition. So I’m not sure if the PROTAC needs any help from me.

But I’ll talk about it anyway, since it’s a strong weapon mounted light.

This is the big thing that everybody wants to know first.

Is it bright? Yes. Streamlight says it puts out 625 lumens of white light.

I’m not all that good at measuring lumens with my eyeballs. But the beam is impressively intense. It’s also relatively concentrated. That’s good and bad.

The concentration reduces the spill quite a bit. There’s not a ton of light outside the central hot spot of the beam. You may not see objects on the periphery of the beam as well as you might with a light that produces more spill.

Super intense hot spot. Not a ton of spill.

However, you get excellent brightness in the center of the beam. You’ll get a really good visual on anything that’s directly in the light.

Also, the concentrated beam helps throw the light further. The PROTAC has an impressive range. I have another weapon light that produces a claimed 2000 lumens. And the PROTAC reaches almost as far as that light with a 625 lumen beam, although the illumination isn’t quite as intense at long range.

Last thing, the light has a relatively cool color. That just means there’s more blue light in the beam, which makes it look more white.

I like the cooler color because, for me, it seems brighter and makes it easier to discern objects.

In terms of brightness, the PROTAC is more than bright enough for short to medium range shooting, which is about as far as you’d typically shoot using a weapon light.

More specifically, this light is more than powerful enough for typical civilian defensive shooting and even most law enforcement and military situations where you’d use a light instead of night vision.

The PROTAC is mostly very well built. As far as I can tell, this light only has one real weak point.

The aluminum body and head are nicely machined from aluminum. And I’ve never had any issues with the seals leaking. The waterproofing works as advertised.

Also, the included picatinny rail mount has excellent tolerances. And it doesn’t flex or put shear force on the bolts. However, I’m not a huge fan of the picatinny mount. But I’ll get to that in the next section. For now, suffice to say the mount is durable and well-built.

Additionally, the included remote switch is itself pretty nice. The attachment point for the cable—the usual point of failure on the remote switch—seems relatively well built.

However, even though the cable seems pretty well secured, I still think the cable is the weak point of the whole light.

Now, I know that it’s probably the weakest point of any light. But I think the PROTAC remote switch tail cap might be especially susceptible to failure. Though, neither of mine have developed any issues.

But some sort of cable reinforcement on the tail cap would be reassuring. The Madd Maxx Guns Channel released a video completely unrelated to the PROTAC in which his PROTAC HL-X seemed to have a connection issue in the tail cap.

Again, mine have been fine so far..

Not a lot of support for the cable joint.

However, I think the tailcap design is probably not robust enough for a law enforcement or military duty rifle. Or, if you do use this light on a duty rifle, I’d recommend finding a way to add some support for the cable on the tail cap. You could also just use the push button tail cap, if you can set your forend up for that.

Is the PROTAC durable? Yes.

Is the PROTAC as durable as a Surefire or Modlite? Probably not quite. But only because the remote switch tail cap isn’t quite as robust.

With the remote switch, this light is super awesome to use. The remote switch is huge and easy to use. Everything installs super easily. And the PROTAC comes with zip ties for cable management (even though I just used ranger bands for simplicity).

Overall the operation is great, from the installation to shooting.

But I do have a nitpick or two, because that’s what I do. Most of my nitpicks have to do with the included picatinny mount.

The first thing to note is that the picatinny mount is removable. And the PROTAC mounting base is compatible with anything that fits a Surefire M600. That’s super cool. I dig that.

However, the PROTAC doesn’t come with screws that fit the light body. You have to get the fasteners separately, which is actually kind of a pain. Including those screws in the box would be a really easy way to make this a complete package.

But I prefer a fastening system that takes a tool. That way you can really secure your light to your rail.

Just remove a couple of hex screws to take off the picatinny mount.

That’s actually why I ended up searching for screws to mount the PROTAC using a Surefire mount.

All in all, the light works great.

But it would be both more user friendly and more confidence inspiring if it included screws for a direct mount or if the included picatinny mount tightened with a tool by default. Take notes, Streamlight.

I'm not a huge fan of this thumb screw.

Ultimately, I think that the PROTAC Rail Mount 2 delivers a ton of value for the money.

It’s a really well-built alternative to certain lights that cost like $300.

The only caveat is that you should probably stick with the $300 weapon light if you need a light for a true duty gun.

For typical civilian use, though, this light hits the sweet spot between durability, performance, and price. If you’re not an operator, this light is probably the right choice. And, let’s face it, almost none of us are actual operators.