For several years now, the United States Army and Marine Corps have been using the Trijicon ACOG on their battle weapons in combat deployments. That’s all fine and good, but how does it stack up on a civilian rifle? Is it worth buying if you’re a hunter or competition shooter? It turns out that it is not only the military standard, but it’s equally as adaptable for civilian applications. 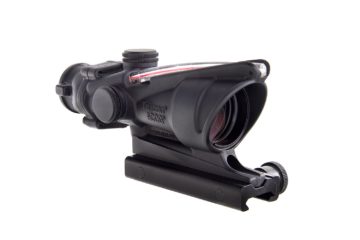 There may be a lot of different types of scopes out there, but few have the durability of the product – or the proven record of reliable operation regardless of environment or treatment. It has been drop-tested, used in harsh conditions, and it holds zero through all of it. In short, there’s a reason why it’s currently considered the gold standard for combat troops.

If you can get your hands on one, you’ll be highly impressed.

One of the significant features of the Advanced Combat Optical Gunsight is the aircraft-grade, forged 7075-T6 aluminum housing. That’s what has allowed it to serve with distinction in thousands of combat deployments without breaking down.

In 25 years of operation, it has consistently ranked in the all-time top tier for illuminated optics. It doesn’t have a lot of bells and whistles – it’s meant to help shooters achieve higher hit rates on targets in a variety of lighting conditions, out to the max effective range of the rifle. This elementary concept and purpose have served it well.

The unit has a long list of models calibrated to a variety of weapons, and within those calibrations, there are options for magnification or reticle style as well, including crosshairs, horseshoe, or chevron. A built-in bullet drop compensator on some models is accurate out to long distances.

Magnification is fixed, but this product comes in models ranging from 1.5X to 6X. Higher magnification models also incorporate the Bindon Aiming Concept™, an aiming style that keeps both eyes open for close range engagement.

(Specs are for the 4×32 scope with red line illumination)

It is meant to be soldier-proof, and that objective carries over into its use as well. The durability is legendary, but it’s also easy to mount and use. A variety of mounts and adapters are available too. Once it’s attached, it’s nearly a point-and-shoot sight for short and medium distances.

The tritium illumination means no-fuss reticle lighting with a battery-free operation for up to 12 years. Trijicon suggests replacing it after ten years of service. The tritium soaks up light from other sources throughout the day, and that stored energy powers night or low-light operation.

The price varies widely depending on model and calibrated caliber. The basic 4×32 model is under $1500, with lighting options and other magnifications pushing the price higher. The 1.5X16S can be purchased for less than $1300, but the M240 variant can run closer to $5000.

Who is this scope for?

While the scope was initially designed for the military, the product variants make it just as good a buy for the civilian user as well.

It includes an extensive line of optics geared for everything from a standard AR variant to an M240 machine gun.

There isn’t much to be said about this product that isn’t a glowing review. It’s well-built, does its job better than most other scopes in its range, and won’t break down when you need it.

Granted the high price makes it more of an investment than a purchase, and other optics are similar for a lot less money, but in this case, you’ll get what you pay for.

The unit’s durability, reliability, and versatile design are worth every penny of its cost and considering there are thousands of soldiers and marines trusting their lives to it every day; the proof is in the pudding.

Whether you’re hunting, competing, or getting shot at for a living, it will do what you need it to, for a very long time.

For those who can’t necessarily meet the over-$1000 price point, there are clones available. While they don’t offer the same durability and versatility of the Trijicon sight, many of them do a decent job for the price.

One of the better ones is the BDTactical ACOG clone. It’s a 1X32 red dot that’s zeroed for 5.56/.223 ammunition. It’s waterproof, as well as a shock- and fog proof. It runs under $100 and offers fast target acquisition for a lot less than the original’s price.
Part of the cost involved in a Trijicon is the tritium illumination. Switching to a clone with battery power drops the price considerably, and the Bushnell Tactical Elite is another 1X32 that can come close to matching the durability of the original but lacks fiber optics or tritium, running instead on a battery to light the reticle, which comes in both red and green.

The Monstrum Tactical 4X30 is another good clone with 4X magnification, both red and green illumination, and a 12-ounce weight, making it lighter and smaller than the actual product. Running at much less than $100, it’s a viable option for those looking for the same look without the price.