Dynamite in a Small Package: The Trijicon SRS

Quick Navigation
Trijicon SRS
Scope Review and Breakdown
Who is this Optic for?
Our Opinion
Other Models from the Manufacturer

In 2012, Trijicon dropped the Sealed Reflex Sight, or SRS, on the red dot market. At the time, shooters looked at it and thought it was too heavy and cumbersome.

Then, however, they started testing it and found that not all is what it seems. It turns out that the SRS is deceptively amazing, and Aimpoint’s CompM4 line might see itself in second place. 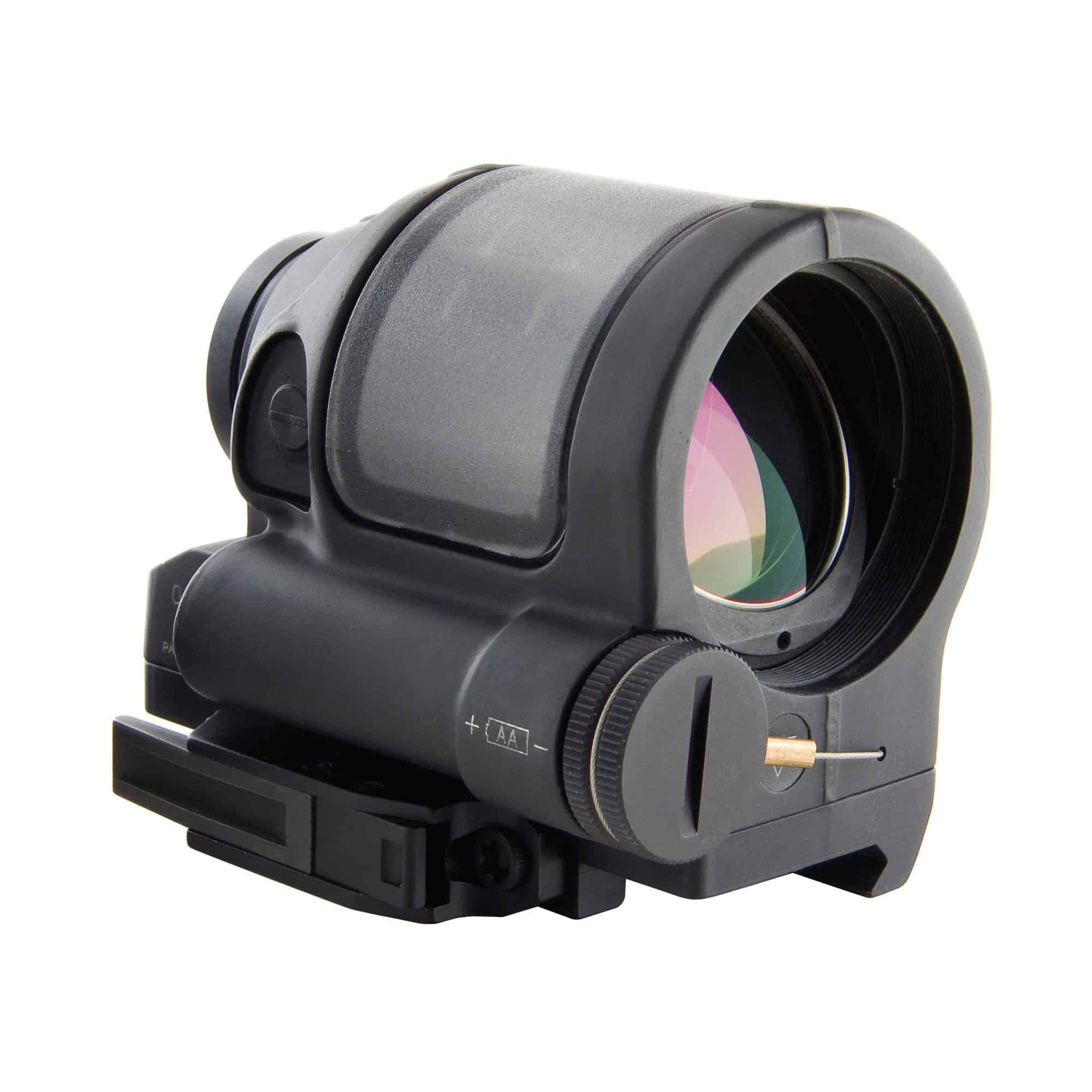 Is the Trijicon SRS worth your time and money?

Bottom line? Yes. If you’re looking for a red dot that doesn’t eat up battery power but also doesn’t have the ultra-expensive tritium illumination, this is a solid buy.

If you also want something that you can beat up, tear up, put through extreme weather conditions, or drop in a pond without losing zero, then this is the purchase you’ll want to make.

The beauty of the product is that it doesn’t have a lot of features. It’s simple, well-built, and it does the job it’s created for, which is to offer fast target acquisition at CQB distances. It’s a 1X red dot with a 38mm objective, and the whole point of this unit was to provide the largest field of view possible, while still keeping a small housing and preventing tunnel vision.

The housing is a lot shorter than comparable products; at only 3.75 inches and 13.8 ounces, it’s a short, fat, and heavy unit. It’s completely sealed, which makes it waterproof to 50 meters, or 165 feet. It’s also shockproof, fog-proof, and basically “anything you can do to it proof.” With the forged 7075-T6 aluminum and top-shelf glass, it can absorb recoil, drops, and much more while staying on point.

It comes with the dual thumbscrew mount, but you can also upgrade to the Brobo quick-release mount. It’s designed for the AR15 platform, but also runs just as well on the AR10 variants and shotguns. Default iron products provide co-witness for the unit’s sight picture.

After its initial introduction, owners reported that there was a reflection that made the internal components visible. However, turning down the brightness mitigates that issue. Also, newer models have a coating that hides the electronics better; Trijicon has also offered to re-coat any previous models under their limited lifetime warranty, so the reflection problem isn’t a problem at all.

It doesn’t get much easier to use than this unit. Rubber plus and minus buttons control the illumination brightness, and especially with the quick-release mount, it’s a plug-and-play item. Mount, zero, and go.

For reliability, there’s no comparison. There are no exposed adjustment turrets or easily-popped open battery compartment, and every piece of the unit is made in the USA. It’s rugged to the point of nearly being indestructible.

It is powered by a solar panel that handles all illumination power during daylight hours, and auto-adjusts based on the current ambient light. The single AA battery is only used during night time operations or overcast conditions.

This means depending on how you’re using this product, battery life could be ridiculously long; Trijicon says one battery will last you up to 3 years.

The SRS price varies in the $800-$1100 range, so it’s not for the faint of heart or pocketbook. For what you’re getting though, the cost is matched in value. With its indestructible durability, this is a purchase you’ll make once and use forever.

Who is this Optic for?

The SRS is for those who need fast target acquisition at CQB distances (under 50 meters). While it was initially meant for military and law enforcement applications, it’s equally suited to the home defense weapon as well.

The SRS is calibrated for the AR15 and AR10 platforms, and also works on shotguns for home defense.

The SRS is expensive; there’s no easy way to say that. In fact, for many shooters that may be the deciding factor in the “no” column.

For those whose budget can afford a $1000+ red dot, however, there’s no real equal. Considering you can usually find them for less than the suggested retail, you might be able to get one for less than you think.

The shorter body, larger field of vision, and Bindon Aiming Concept all combine to make a superior red dot optic. Granted it doesn’t have the tritium illumination that the brand is known for.

But with the solar panel on the top, chances are you’re never going to run out of power. With the mitigation of the reflection issue, there’s no reason not to have one of these if you can get your hands on it.

Aimpoint has long been top of the proverbial pile when it comes to red dots —at least until the Trijicon came along, that is. The CompM4 model offers eight years of operation on a single AA battery, and it’s currently in service with the U.S. Army as their M68CCO, or close combat optic. It has a top-mounted battery compartment on some models and a low-mounted battery on others. They also come equipped with a killFlash anti-reflection device.

The CompM5 is a high-performance red dot that can also compete with the SRS; in fact, it’s the closest counterpart. It, too, runs the ‘both eyes open’ aiming concept, and is compatible with all generations of night vision devices.

Battery life is also excellent, offering over five years of use on one battery. The CompM5 is designed for military and law enforcement but is available to civilians as well.