I recently built an AR-15 with an 11.5 inch barrel, specifically to be a suppressor host. The gas system on a suppressed rifle must withstand a little bit more stress than an unsuppressed system (or maybe a lot more stress, depending on the specs).

So I was interested in building a more robust gas system. In the interest of building a stronger, more heat resistant gas system, I bit the price bullet and bought a V7 Extreme Environment Gas Tube.

This is my brief rundown of whether or not that price bullet was worth the bite. 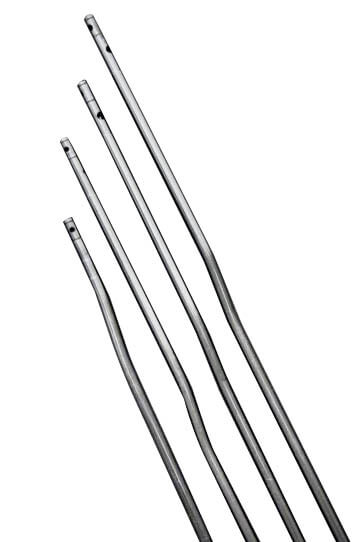 The big deal about this gas tube is the metal it’s made of. This gas tube is constructed from inconel. It’s the same metal that many manufacturers make their suppressor baffles from.

This is good news, considering the heat and carbon that gets blown into your gas system during suppressed shooting.

The heat resistance is super handy for high volumes of suppressed shooting. It’s pretty common for my barrel and gas tube to get so hot that I can’t shoot without a glove for my support hand.

I got this gas tube smoking hot. No problem. Though, I must admit that I’ve also run stainless steel gas tubes pretty hard without issues, too.

Ammo is too expensive to shoot enough rounds to even get close to wearing out a gas tube right now. However, I suspect that the heat resistance will improve the lifespan of this gas tube.

Heating up very quickly is bad for most metals. And spending long periods of time at or near the limits of the heat tolerance can also cause metal to weaken.

My belief is that more heat resistance and a higher heat tolerance will cause less wear and warping over time. So, in theory, the inconel should withstand a much higher round count before any gas leaks develop.

But I certainly haven’t gotten anywhere near the end of life for this gas tube. However, in my experience so far, it’s an incredibly durable gas tube.

This gas tube is protected with a DLC (diamond like coating). As far as I know, this is the only gas tube that’s finished in a DLC. Most high-grade gas tubes are covered in a black nitride or melonite finish.

The black DLC finish also looks cooler, to me. I prefer the blacked out aesthetic. But that may not matter to you, especially if your handguard completely hides your gas tube. The cool aesthetic is there if you need it, though.

Also, this gas tube produced an impressively snug fit in the gas block I used. And, once the roll pin was installed, the V7 gas tube was absolutely locked in.

I’ve had gas tubes that wiggled a tiny bit, because the pin hole in the gas tube was a tad oversized. Not so on this gas tube. There was zero play once the gas tube was installed, which is ideal.

The gas key flange is also well machined. It’s a thicker section that forms a collar, rather than a simple widened section. It’s the most durable and long lasting design that resists gas leaks for tens of thousands of rounds.

Overall, the fit and finish is outstanding. Compared to my usual gas tube suspects, this gas tube fits just as snugly, and might even have a tiny bit less wiggle once the roll pin is installed.

Ultimately, this V7 Extreme accessory is a great gas tube.

My only reservation about this gas tube is it might not be worth the price for most shooters. Most people—even those who often shoot suppressed—will probably never get near the limits of this gas tube.

My gut feeling is that the average shooter will never need the benefits of an inconel gas tube. However, the extreme limits of the gas tube are confidence inspiring. I’m very certain that my 11.5 rifle will never overrun the durability of the gas tube.

Does it matter that I will probably never overrun the limits of a stainless steel gas tube? Not really. Confidence is worth something.

But, if you want the confidence of a gas tube that you’ll never burn out, you’ll have to pay the price for the V7 gas tube, which is a little bit steep.