Quick Navigation
VORTEX SPITFIRE 3X PRISM
Scope Review & Breakdown
Who is this Scope for?
Final Verdict
Other Models from the Manufacturer

Red dots have been a fixture on modern sporting rifles since the early 2000’s, which was about the first time the author fired a service M4 with the M68 optic. Aimpoint and Eotech have led the herd since the early days after securing very lucrative defense contracts, but since then reputable manufacturers have entered the shooting scene to offer affordable, durable, and advanced optics.

Prism sights have presented themselves as a viable hybrid optical system; they provide the rapid acquisition of a red dot with the stability and magnification of a traditional scope, all on a unit which is sturdy and reliable. 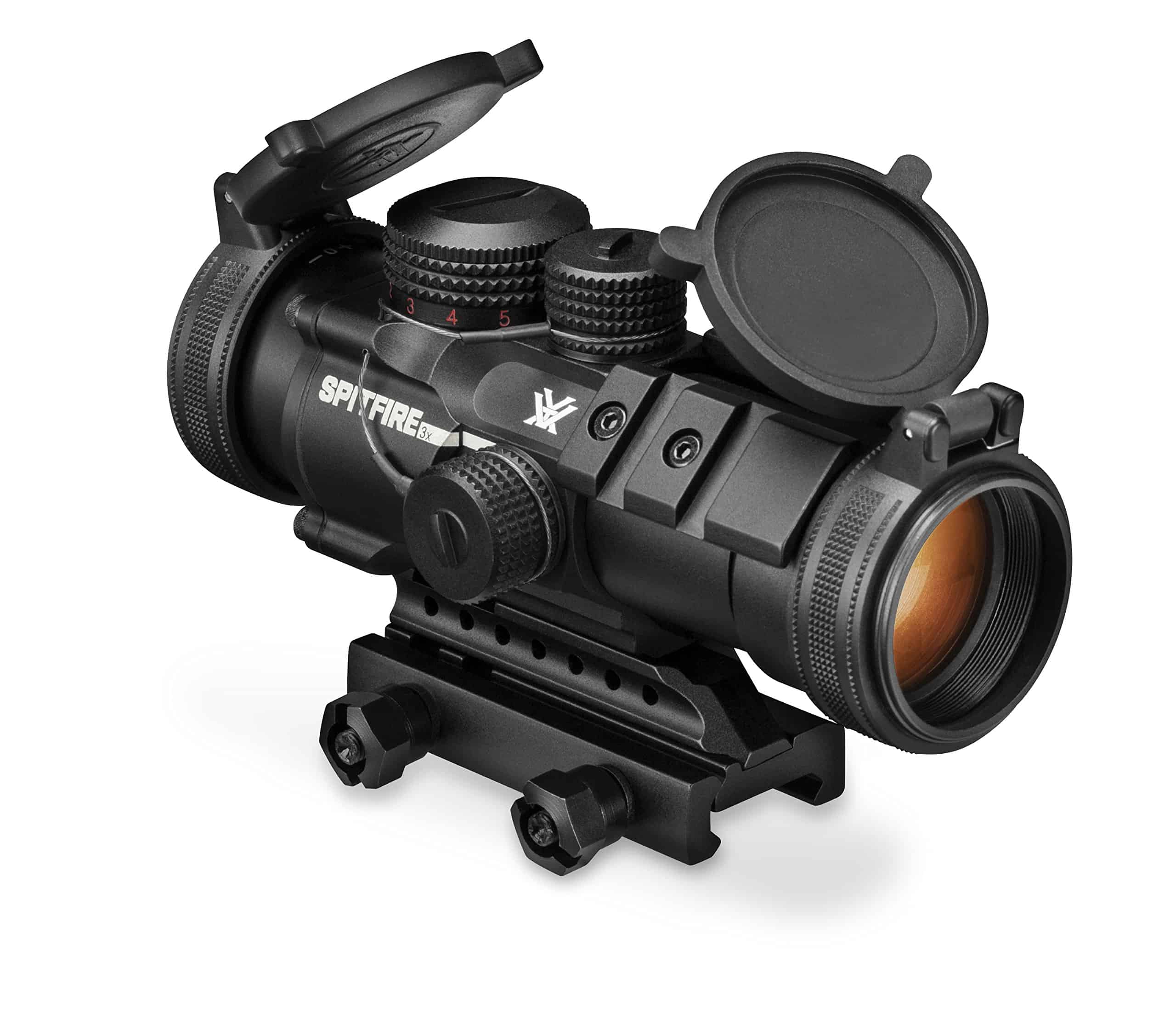 Prismatic optics are more expensive as a general rule than their cousin, the ubiquitous red dot optic.

The reasons for the added expense are primarily due to the durable design which integrates mount into the optic since it is milled from a single piece of metal stock.

The reticle is etched into the glass in the same way as a traditional magnified optic, alleviating the drift typical to red dots, yet it is lighted for low-light target acquisition much like a red dot.

It runs about $150 over the compact Sparc, but retails for about the same as the variable power Strike Eagle, sans mount. Whether it is worth the money depends on what and how you shoot.

The scope is built with a reticle optimized for the standard .55 grain 5.56x45mm cartridge. The reticle, dubbed EBR-556B, has ranging marks for 0-500 yards allowing it to be used efficiently and effectively in CQB environments as well as medium range engagements.

One of the inherent beauties of a prism optic vice a standard dot optic is that if the battery runs out or the illumination was to fail otherwise, the prism optic is not going to be taken out of the fight; the etched reticle is still fully functional without lighting. 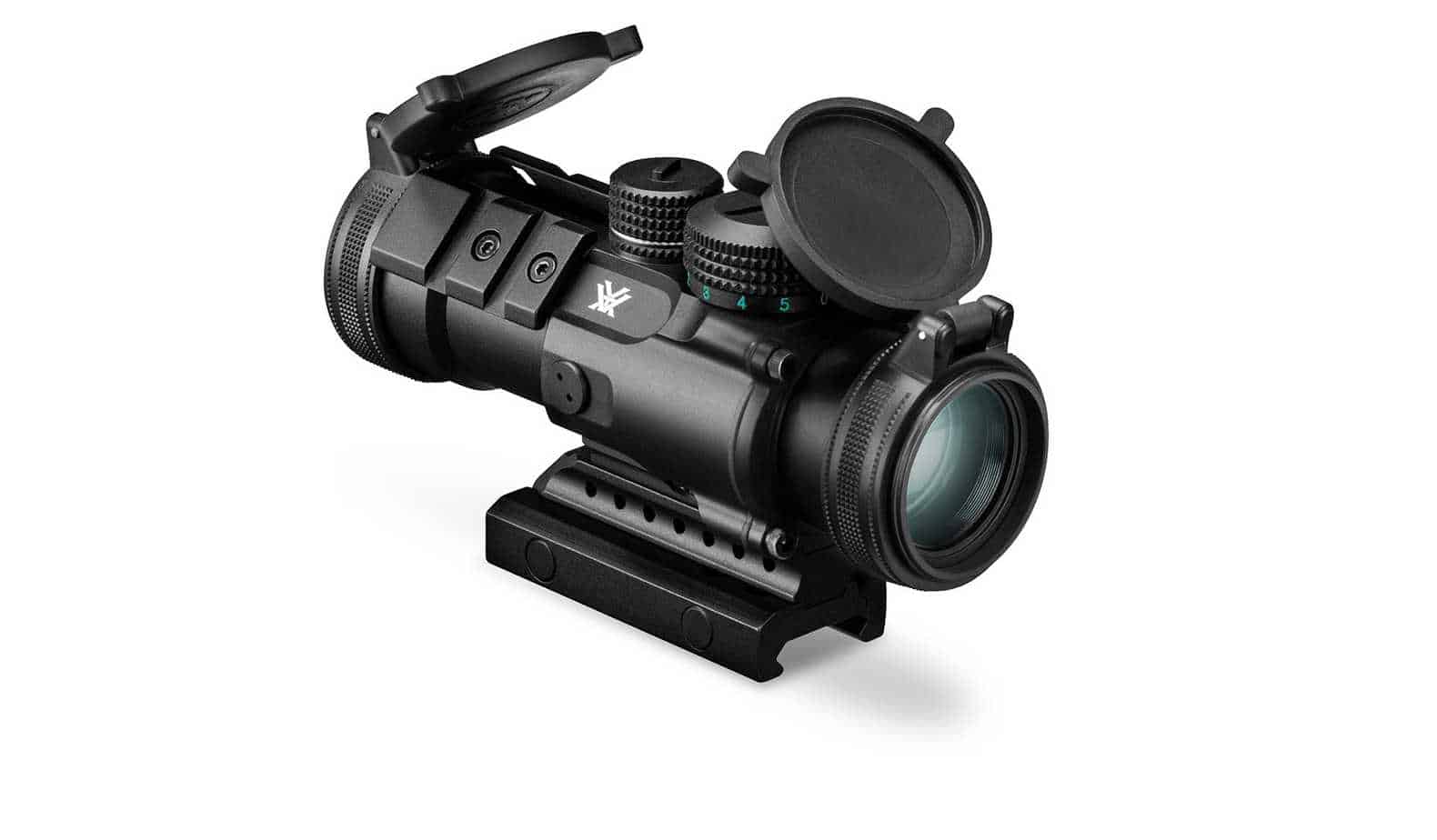 While there is no magnification adjustment, it does have reticle focus and is designed to do so fast. The reticle color is red and green, giving the shooter the option to use either at any given time.

The item is built with two standard Picatinny rails mounted on the top, each canted at 45° angles to enable mounting of fast action reflective sights such as the Venom, for ultra-fast target acquisition in a CQB.

As a shooter of an AR-pattern unit and a landowner, the prism scopes have become a very appealing option personally. It is hard to envision a perfect optic for the dedicated truck or ranch product; it provides much of the magnification of a short range scope, like the Strike Eagle, while retaining all that makes a simple red dot scope so attractive.

These scopes represent the epitome of reliability. They are heavy, built like a tank to handle abuse. Unlike red dots, the shooter is not taken out of the fight if they forgot to turn the power off the last time they were in the range. The user may be limited if they are going to engage in low light conditions, but at least they are still in the fight.

The battery used is the CR2032, which most modern sporting shooters probably already have a stash of in their range bag. It will run 250 hours continuously on the maximum brightness setting, and a miserly 3,000 hours on low.

This product is a reasonably priced optic compared to other optics of similar capability, quality, and brand recognition. It is quite close with other AR-optimized scopes like the Crossfire II, once you add in a mount. It is about $100 less than a higher end low magnification scope like the Viper PST 1-4×24, which does not take into account scope mounts. It falls into the sub-$400 range which is what most shooters can reasonably expect for a quality optic of this type.

The Spitfire is well suited for a wide variety of shooters. 3-gun competitors will find it useful due to its ability to get on target very fast in CQB but move out to the medium-range shots without adjusting magnification.

The LEO community will see merit in fixed magnification prism optics for the flat learning curve, the simplicity of the scope, and inherent reliability.

Farmers and landowners will value the fast target acquisition for shooting coyotes and other predators, but also retaining the ability to set up for a long shot on scourge vermin like prairie dogs, all without ever changing the units or optics.

The home defender will value it for variable color options, rapid target acquisition, and rugged durability. The feral hog hunter will undoubtedly consider the ability to get on target and transition targets quickly in such a target-rich environment. 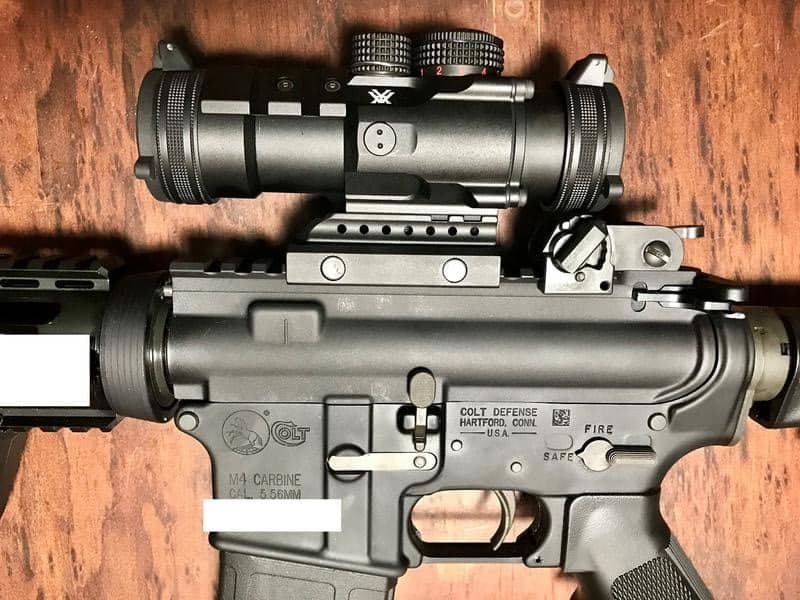 This particular scope is optimized for the 5.56×45 caliber with a 55-grain projectile from a 16-inch barrel. Most experienced shooters immediately recognize this as the prototypical M4/AR-15 carbine setup, which it is. However, optimization does not mean exclusivity.

The Spitfire 3X would be right at home on an AK-pattern or a pistol caliber AR-pattern unit. Since it is designed to handle high recoil, a shooter could easily mount it on .308 caliber semi-automatic such as an AR-10, CETME/G3, or PTR-91.

The user would have to verify zero on their unit and determine yardage estimate using the EBR-556B reticle.

Vortex Optics has not been around for all that long, but they have made serious waves due to their commitment to excellence, outstanding reputation for sales support, and an innovative product line. Prism scopes are a great option to cover a variety of shooting scenarios, which is essential for the average shooter.

Let us be honest: most shooters do not get to shoot often enough to optimize high-end optics. Having an optic that really can pull double- or triple-duty and is built like a tank is a godsend to the average shooter, and the Spitfire is a really good option for this buyer.

Primary Arms is my new favorite supplier of optics. They are inexpensive, and their reviews are almost universally excellent. Their series of prism optics is quite a bit broader than Vortex’s, having several fixed-magnification options specifically for 5.56×45 items, but they also have models with reticles specifically for .30 caliber including .300 Blackout, 7.62X39 (AK-pattern), and 7.62X51/.308. +

Burris offers a 3X prism scope, the AR-332, which is similar to the Spitfire and has excellent reviews. Any of these would be outstanding options for the shooter who has it in mind to transition to the fixed-power prism optic.