The original Walther P22 had some pretty serious reliability issues. But it was a comfortable gun. It was fun to shoot. And I’ve never used .22 pistols for more than recreational shooting, anyway. So a few stoppages didn’t really bother me.

However, Walther has updated the design. The modern P22 (P22 Q), is more reliable, in my experience. And it’s a great little gun for the money.

However, it’s not a perfect gun for the money. I’ve found things to nitpick, because that’s what I do.

Walther P22 from Front to Back (and then some) 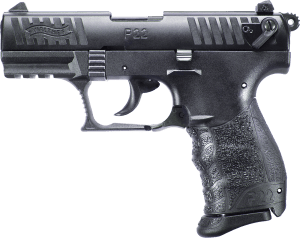 Let’s just move from the muzzle to the rear of the gun and cover what’s good and bad. I

t’s mostly good. So don’t fret too much if you’d like to get one of these nifty little pistols.

There’s not much to say about the barrel on a .22LR pistol. It shoots bullets straight. And the gun is more precise than you are. If you miss, it’s most likely not the gun’s fault...

However, it’s cool that Walther offers a threaded adaptor that you can fix to the barrel. That way you can attach a suppressor. Firing subsonic .22 rounds with a suppressor is super cool, because it’s SO quiet. 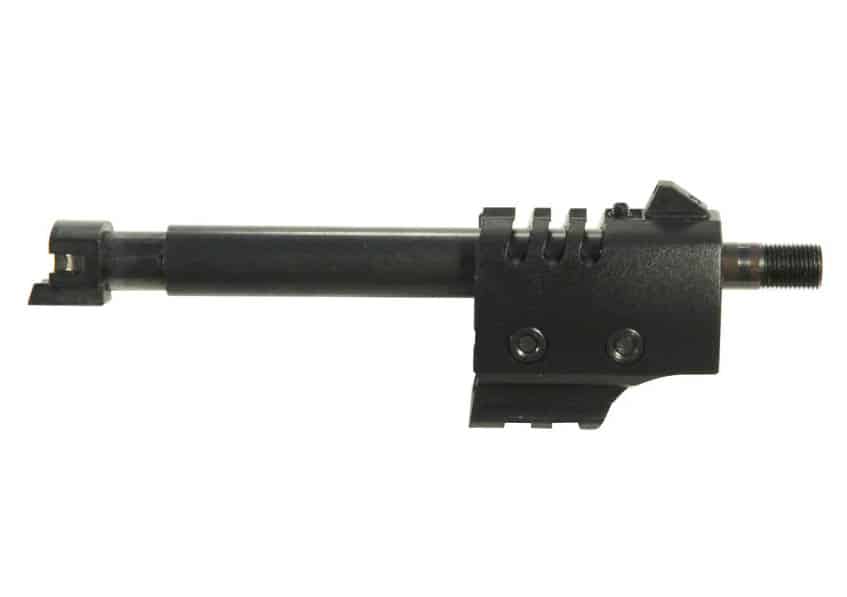 You have to disassemble the gun to attach the threaded adaptor. But it’s a fairly simple operation.

So that’s a neat design perk that Walther added to the P22 Q. Unfortunately, you have to purchase the threaded adaptor separately. 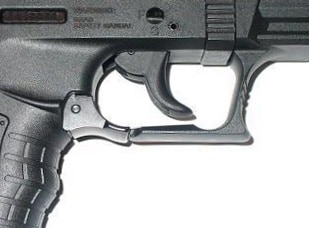 This is where the P22 really shines. Walther has produced outstanding triggers for as long as I can remember. Even the triggers on their striker fired guns are really good.

So it doesn’t surprise me that the trigger on the P22 is excellent. The movement is smooth. The break is super crisp. It resets nicely. And it’s really good in single-action. 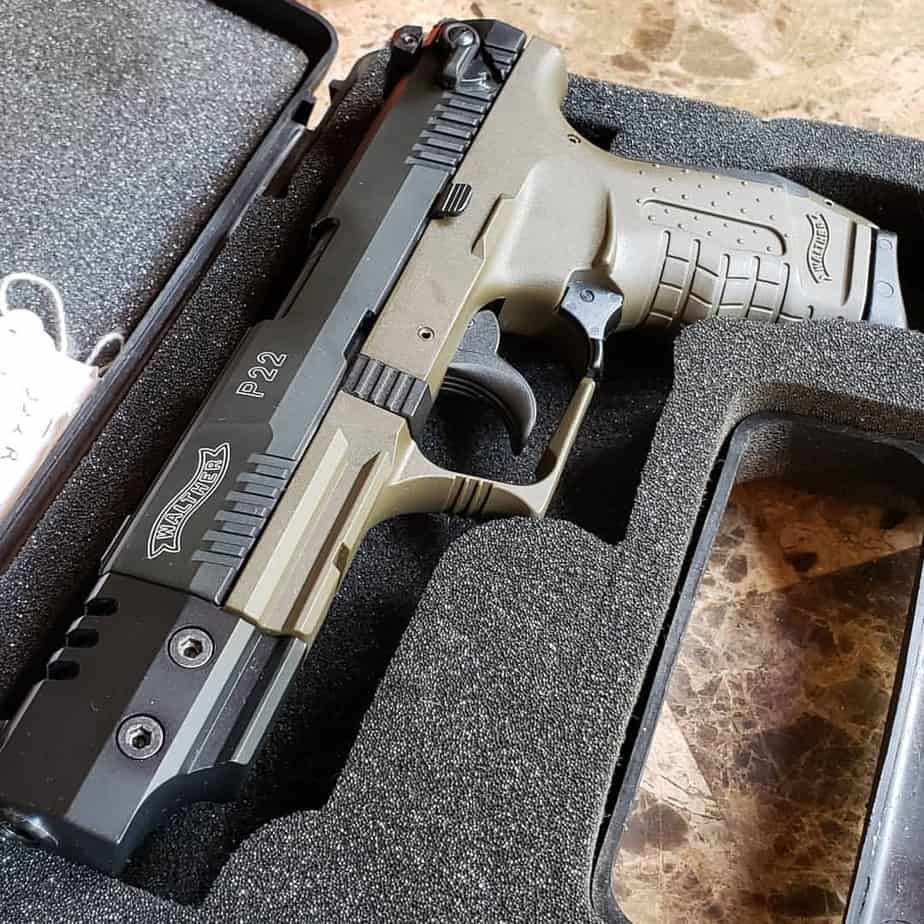 I’m not really a trigger snob. I’ll press anything. But I can’t deny that this trigger is awesome.

The only thing that could be better is the double action pull weight. It’s about 11 pounds. A couple pounds lighter would be nice. But it’s no big deal.

Grip shape is another area where Walther has always been a winner. Walther pistols are just exceptionally comfortable. And the P22 is no exception.

It comes with interchangeable backstraps. So you can adjust the size to fit your hands. I have relatively small hands. And I’ve never needed the larger backstraps. 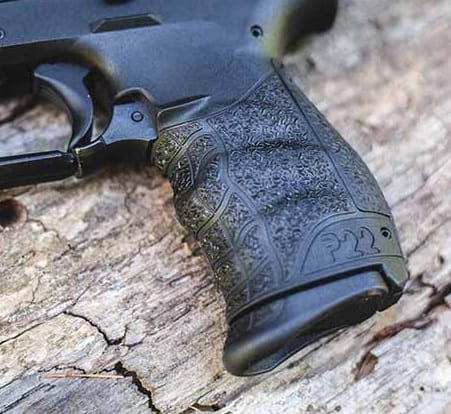 But I notice that even people with large hands often leave the larger backstrap off. The grip is just so well designed, with a really pleasantly shaped palm swell, that it works for almost anybody.

The grip texture is also outstanding. It’s aggressive enough that it actually does it’s job. But it’s not so rough that you’d tear up your hands if you were to shoot the P22 all day.  It’s a peculiar looking grip texture. But it works great.

Finally, this gun points really intuitively. I’m not sure what Walther’s exact grip angle is. But most shooters will find that the gun aligns with their target quite easily if they use good shooting technique.

This is where most of my complaints are.

First, I’d like to point out that the ergonomics are actually quite good.

The paddle magazine release is easy to use without shifting your grip on the gun (even if you’re accustomed to a button safety).

The slide is easy to rack, regardless of whether the hammer is back or not.

And there are front cocking serrations, which is a nice touch on a .22 pistol in this price range. 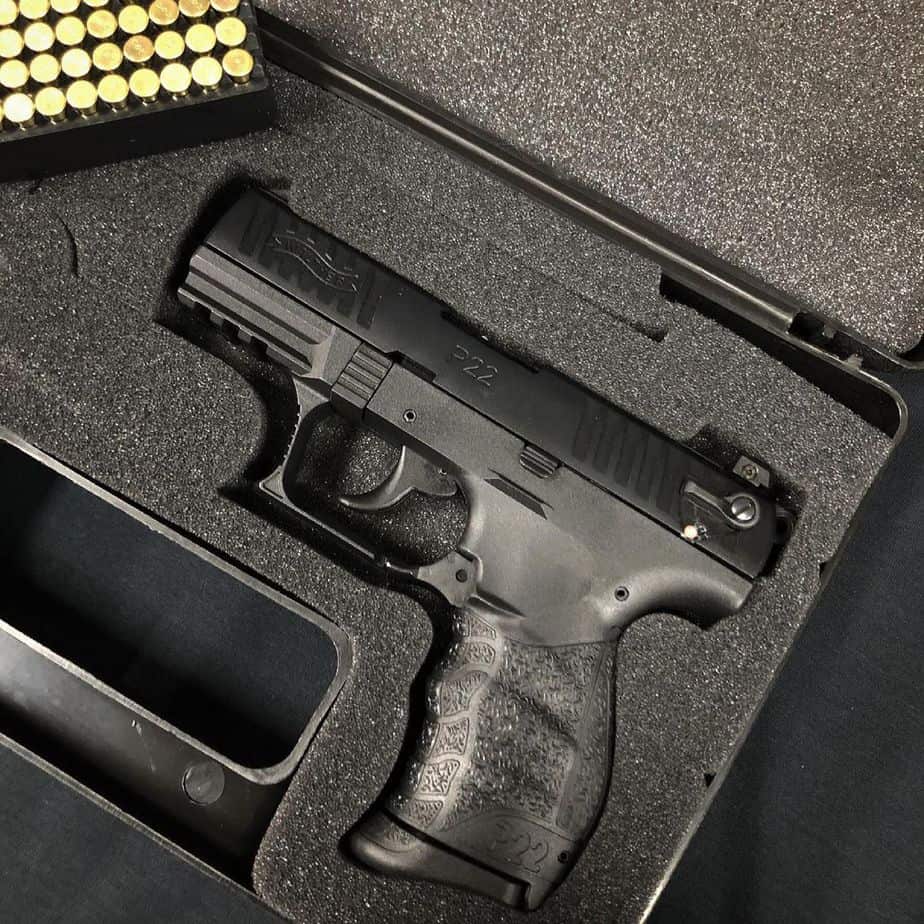 In ergonomics and operation, the news is mostly good.

My only gripe is the safety. It’s a safety decocker, which the original P22 didn’t have. And, as far as safety decockers go, it’s good. It articulates easily and securely. And you can rack the slide and unload the gun with the safety engaged.

However, the safety isn’t the easiest to reach. I know that there’s not really any other place to put it, since it’s also a decocker. But it’s just not in a convenient spot, especially for quickly engaging and disengaging.

But, other than that, the ergonomics are outstanding.

This is probably the weakest characteristic of this gun. Yes, Walther improved the reliability a lot. The P22 Q is much more reliable than the first generation P22.

But still not perfect. It has occasional failures to feed (maybe 2 to 5 out of 100).

Also, occasionally, the slide won’t go into battery until the trigger resets. It’s a self-correcting issue. But it’s odd. And I’m not the only one who’s seen the P22 do this. It doesn’t seem to be isolated to the P22 Q pistols that I’ve fired. 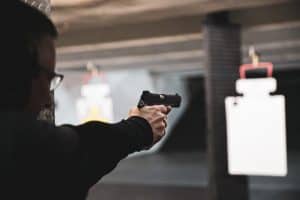 In any case, malfunctions aren’t so common that you’ll get frustrated. But it’s not reliable enough to use as a defensive gun (and .22LR isn’t an ideal defensive handgun round, anyway).

As a recreational gun, it’s fine. And, you’ll probably get more like 1 or 2 malfunctions every 100 shots if you keep it clean. It’s not as finicky as the original P22. But this gun still prefers to be clean.

If your maintenance routine is good, it’s reliable enough. Not quite self-defense ready. But good enough for everything else.

So what’s the verdict?

The SR22 is a good gun. But the P22 Q feels a bit more substantial. It’s definitely more comfortable. And the P22 is at least just as reliable as the Ruger, or any other .22 pistol out there.

As long as you don’t need a defensive gun, the P22 is about the best .22 handgun you can get for the money.

Simple Guide to Stipple a Gun